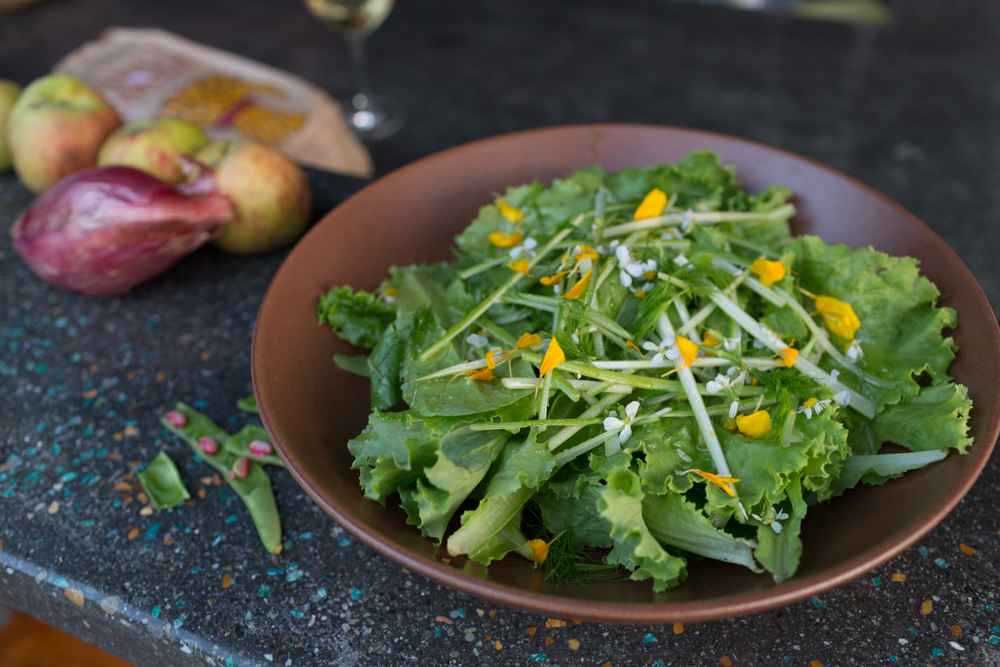 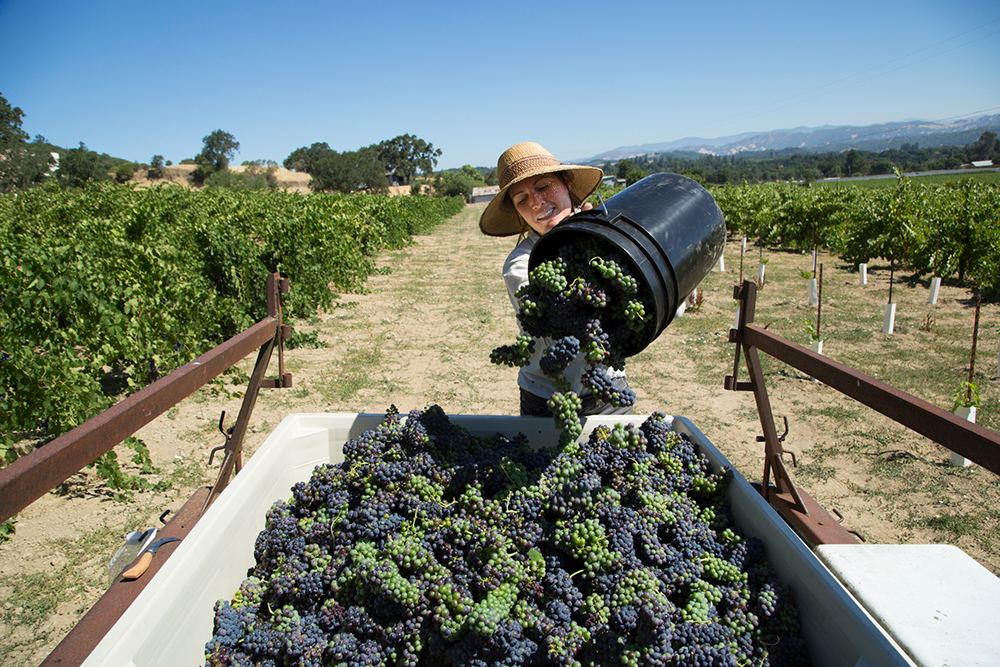 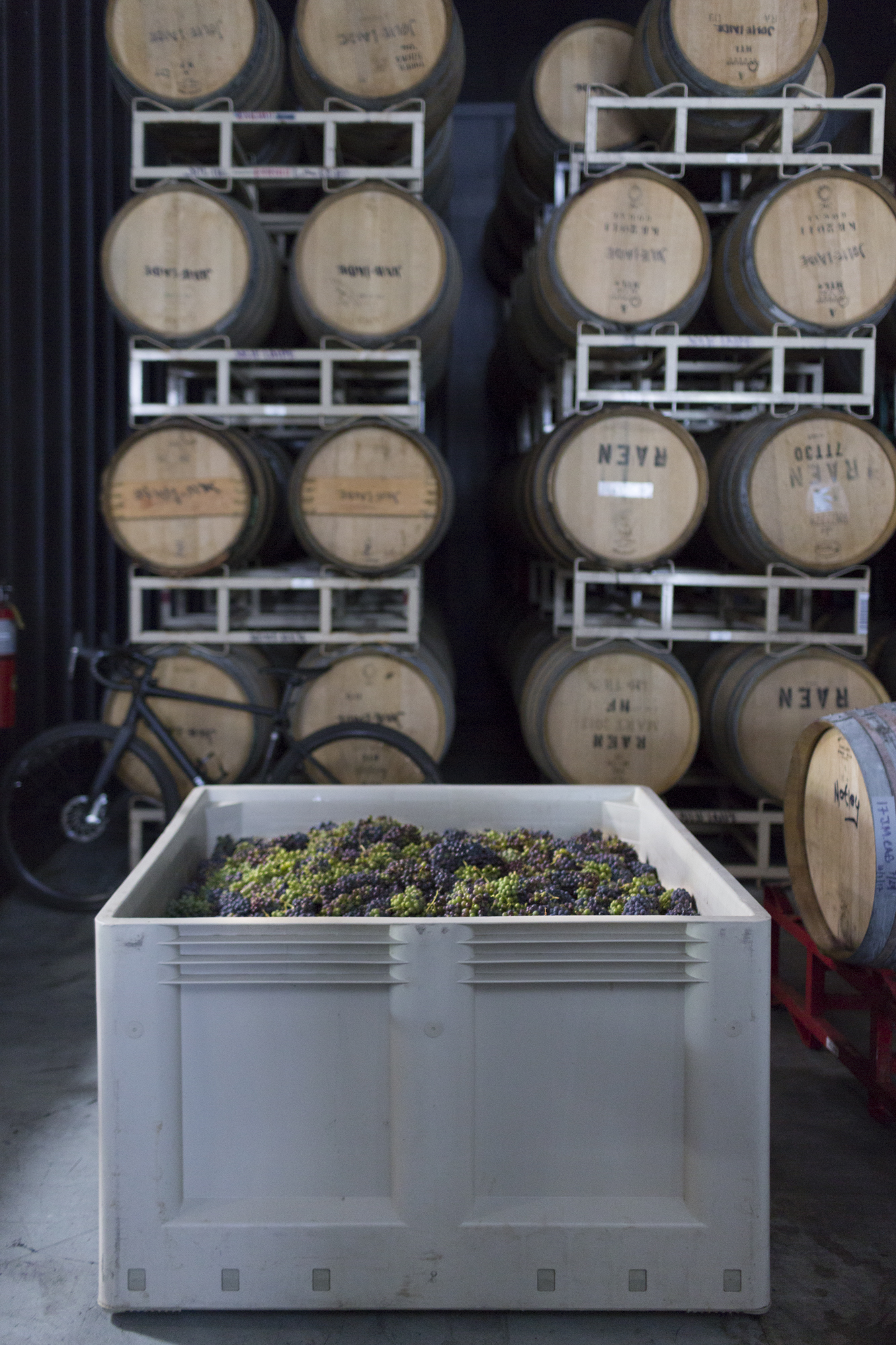 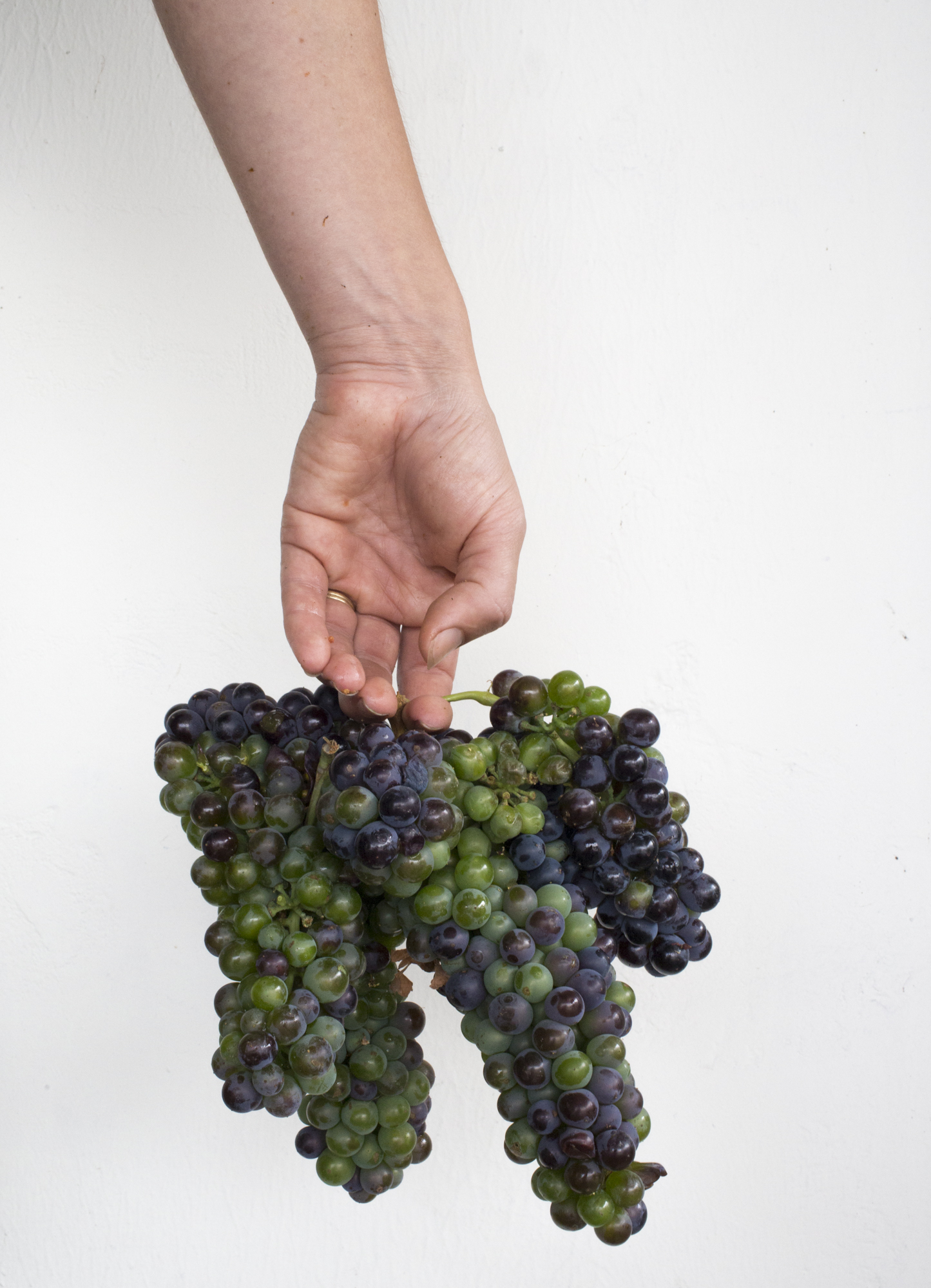 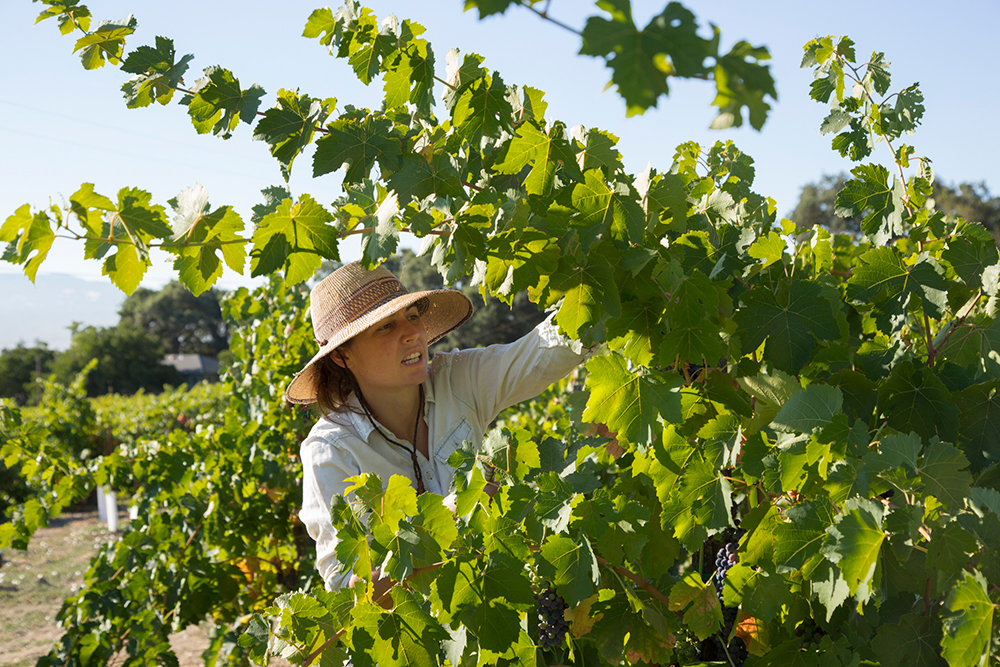 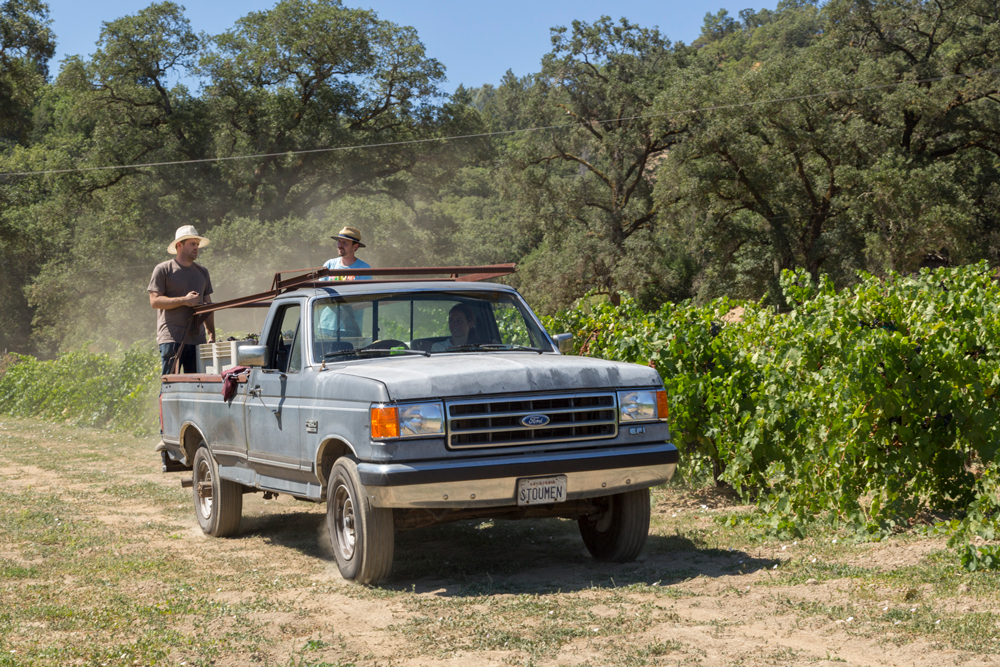 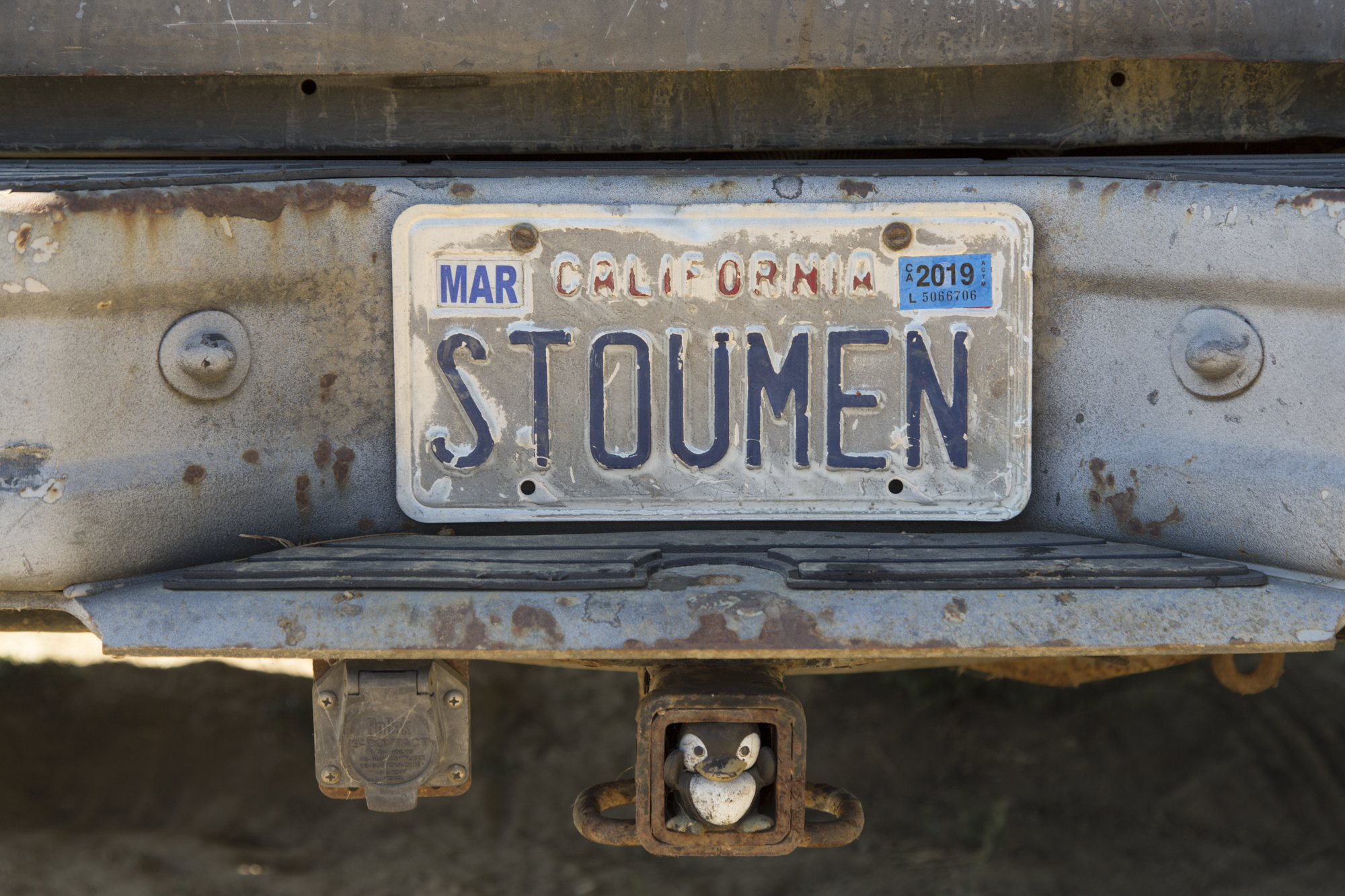 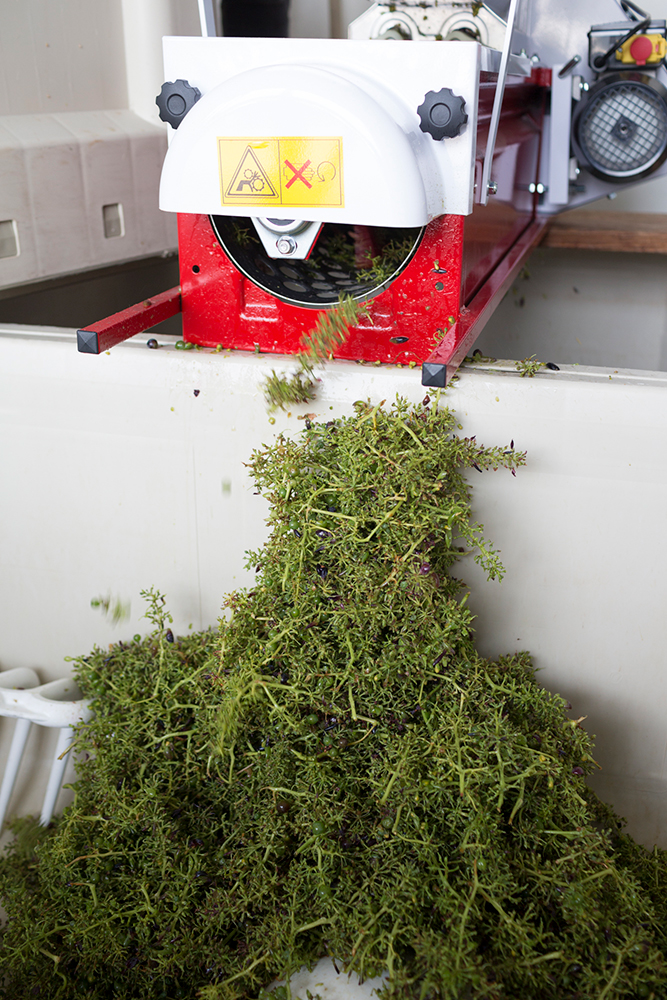 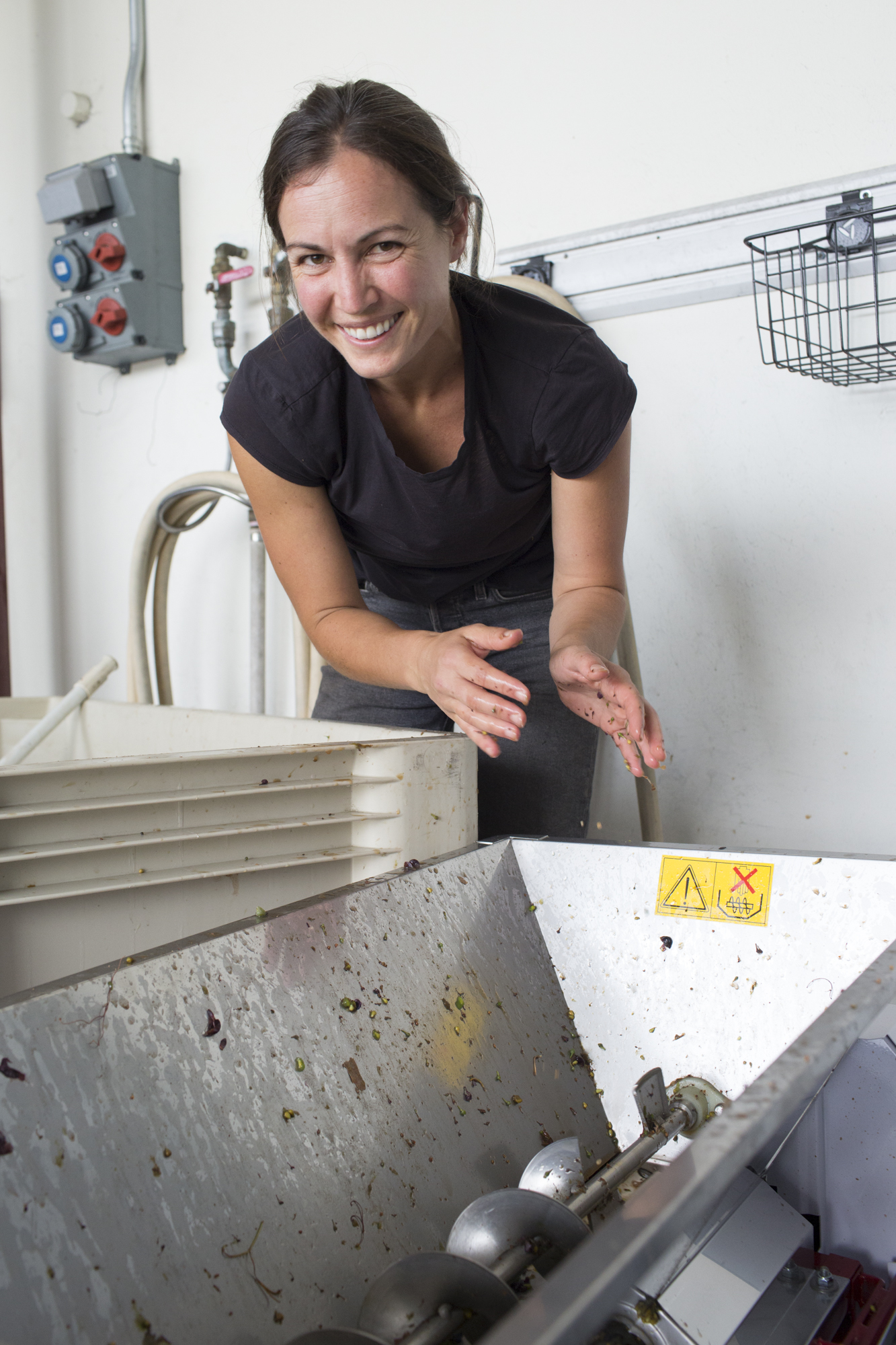 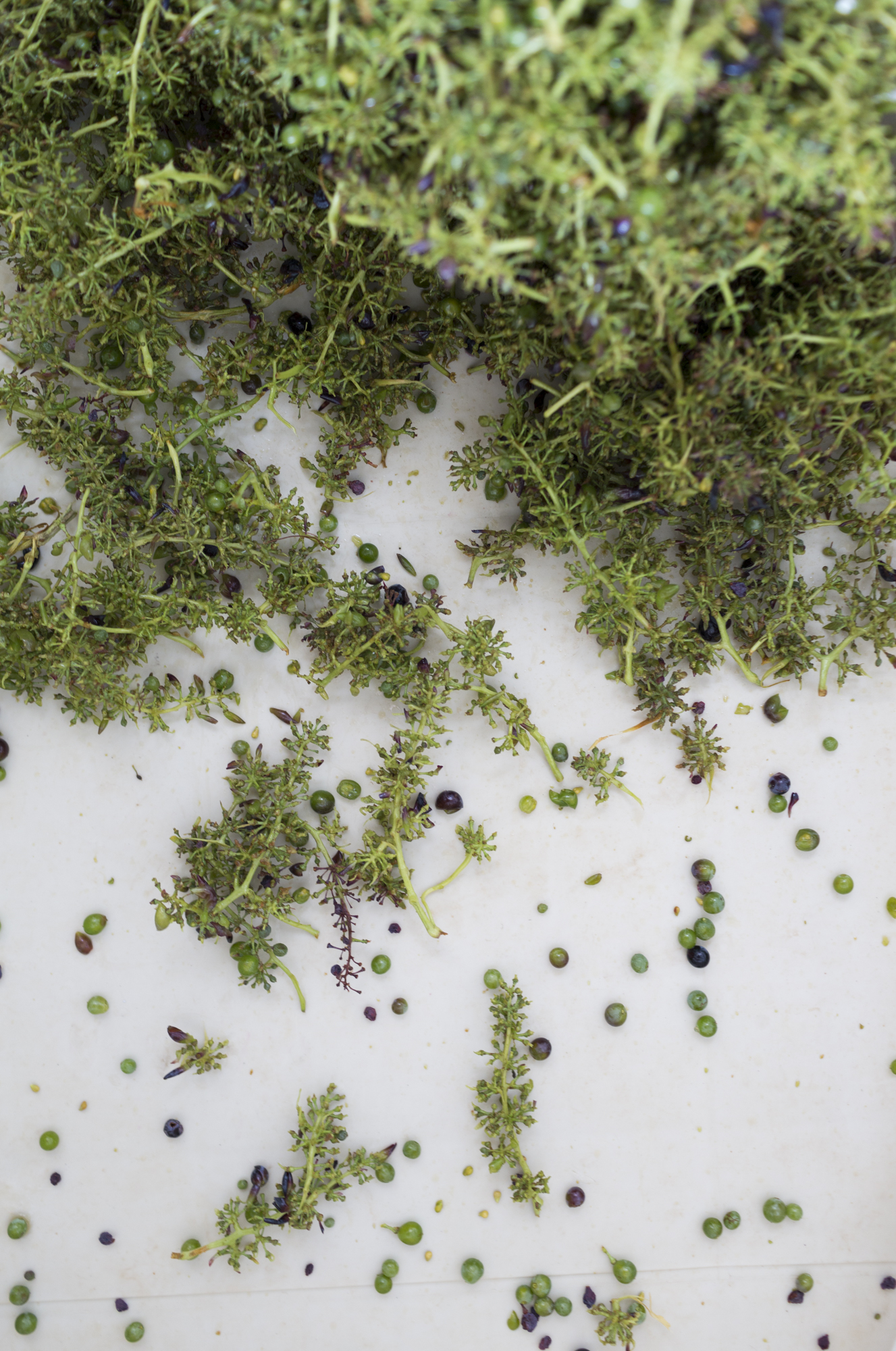 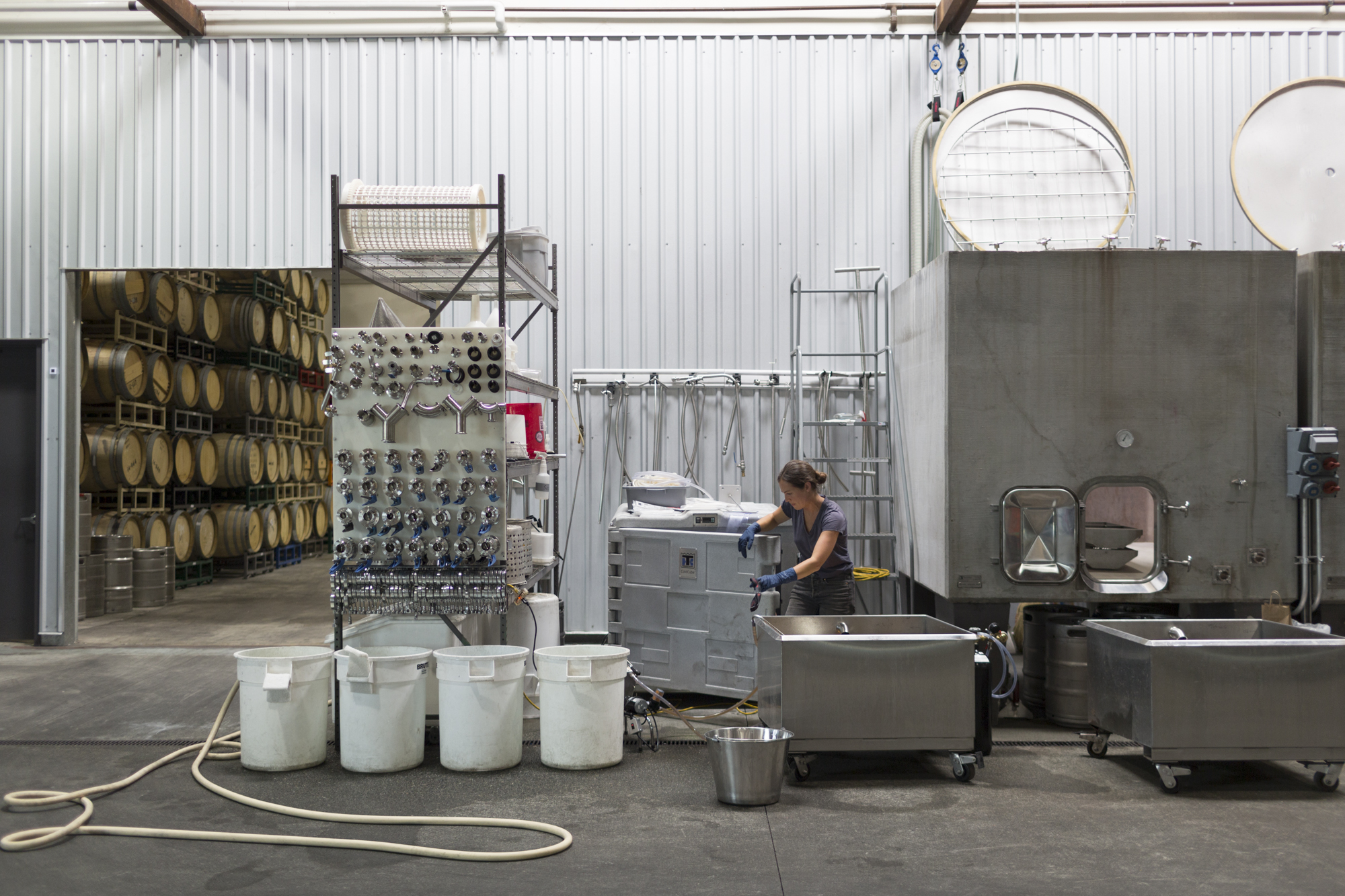 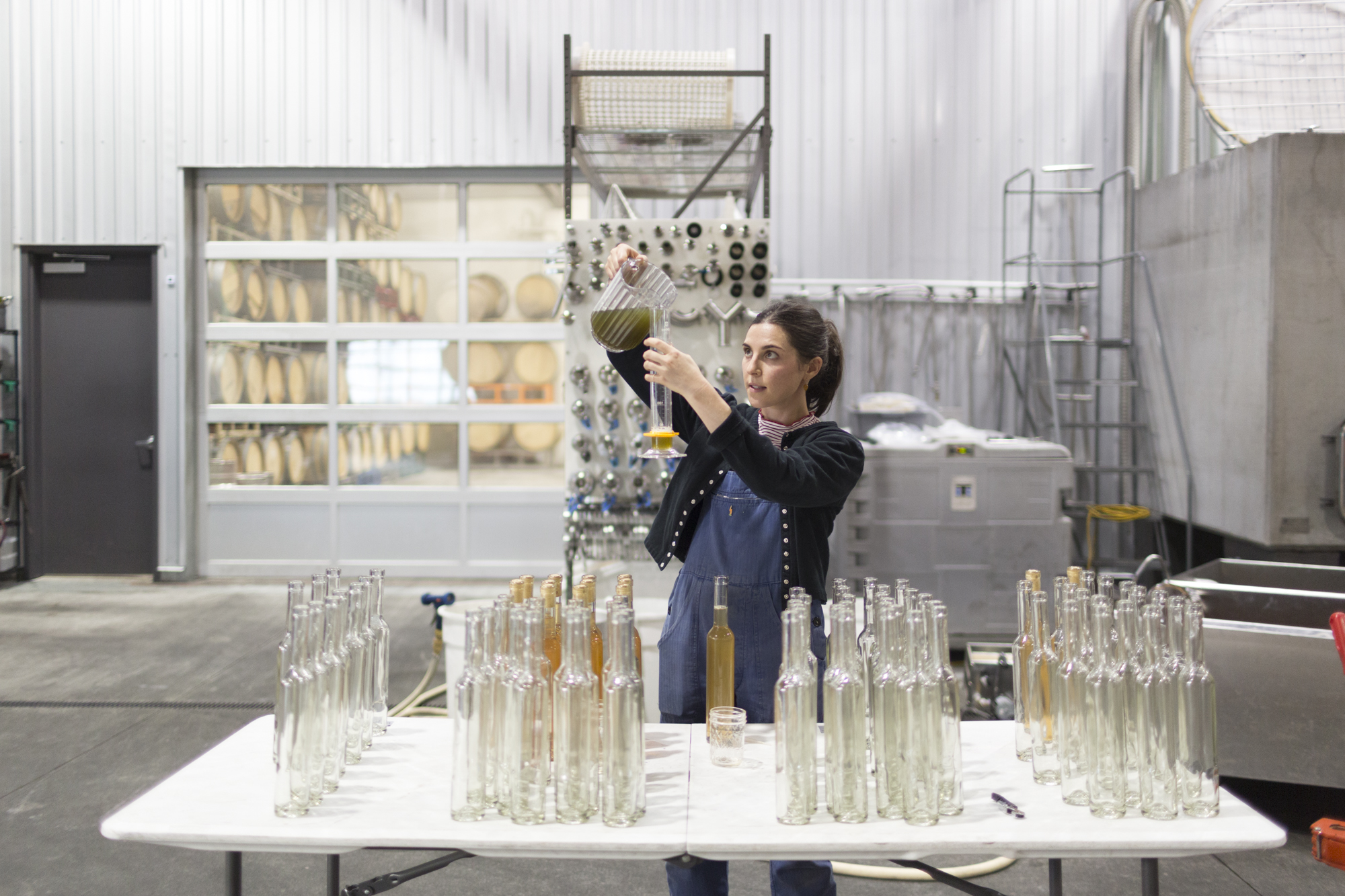 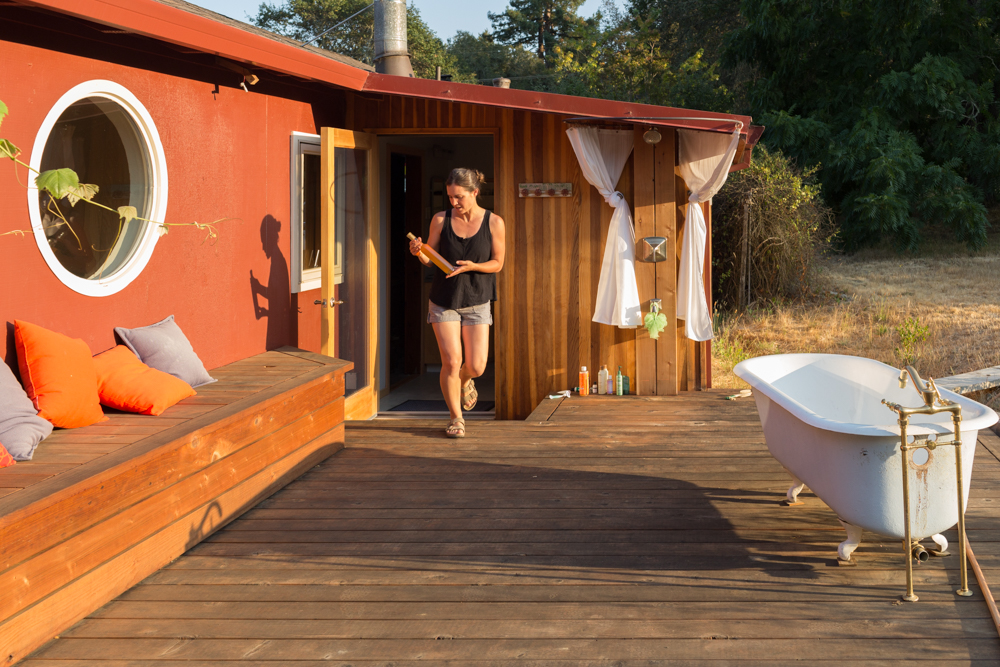 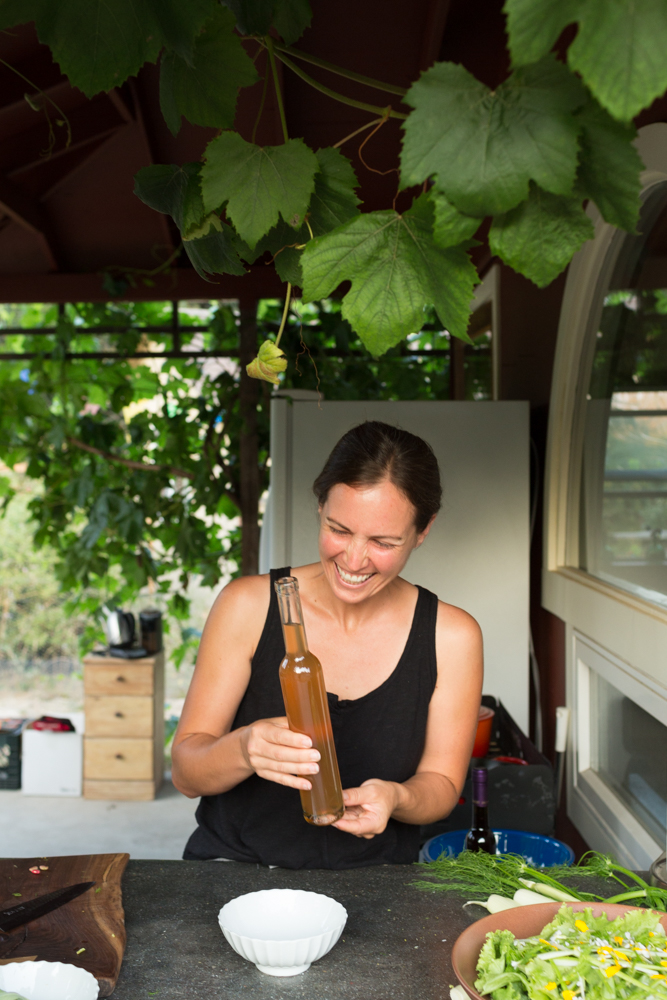 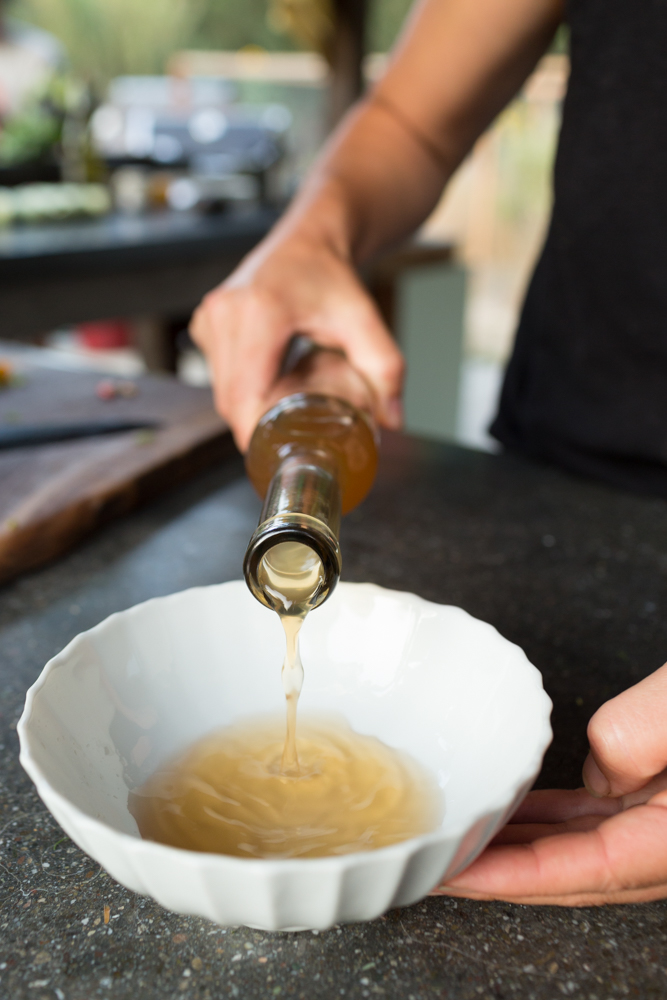 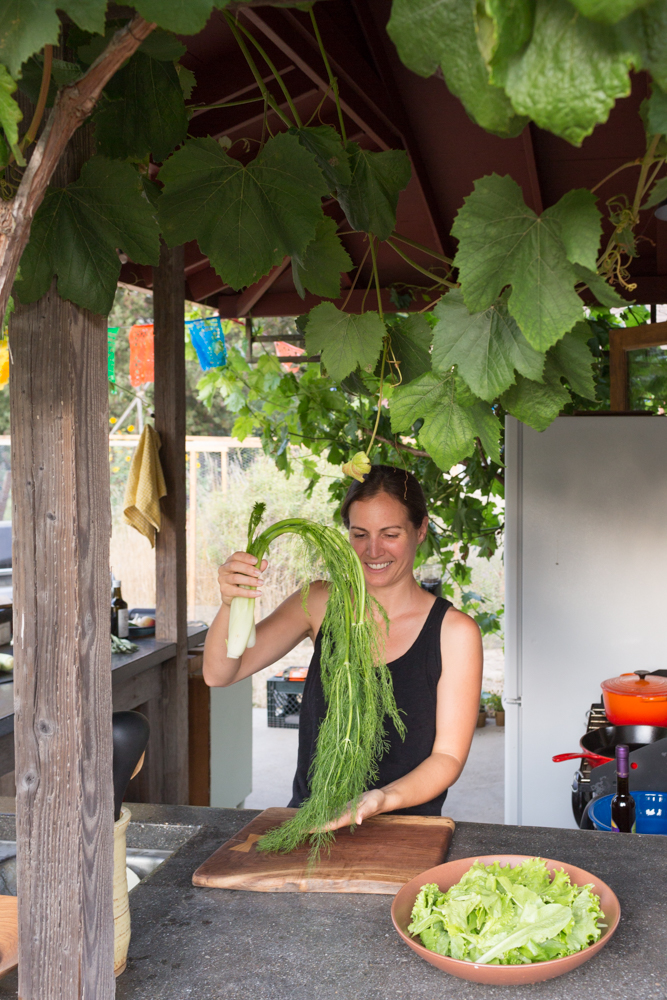 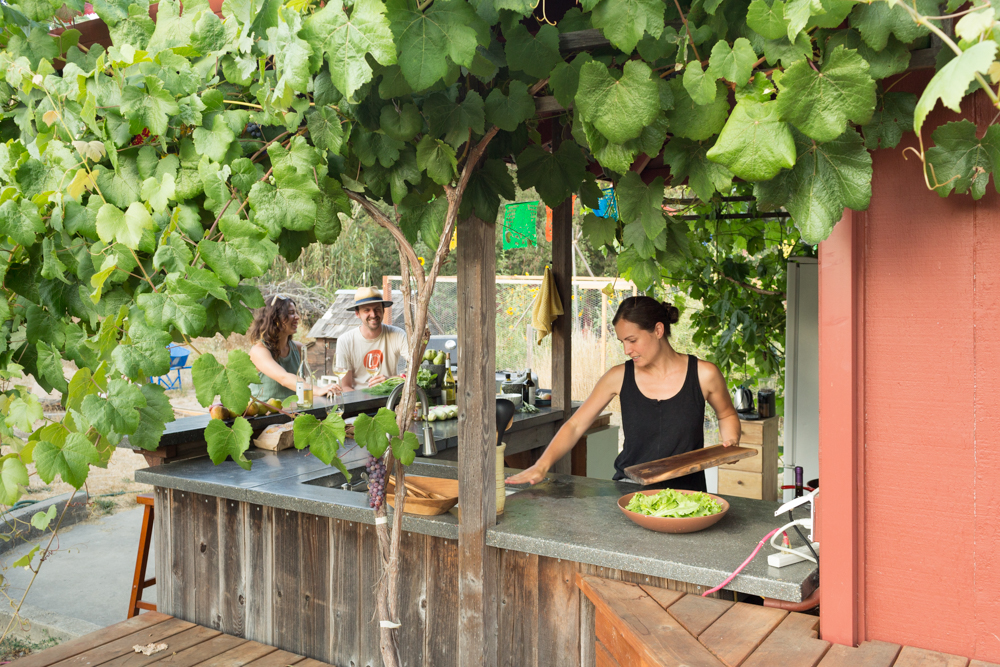 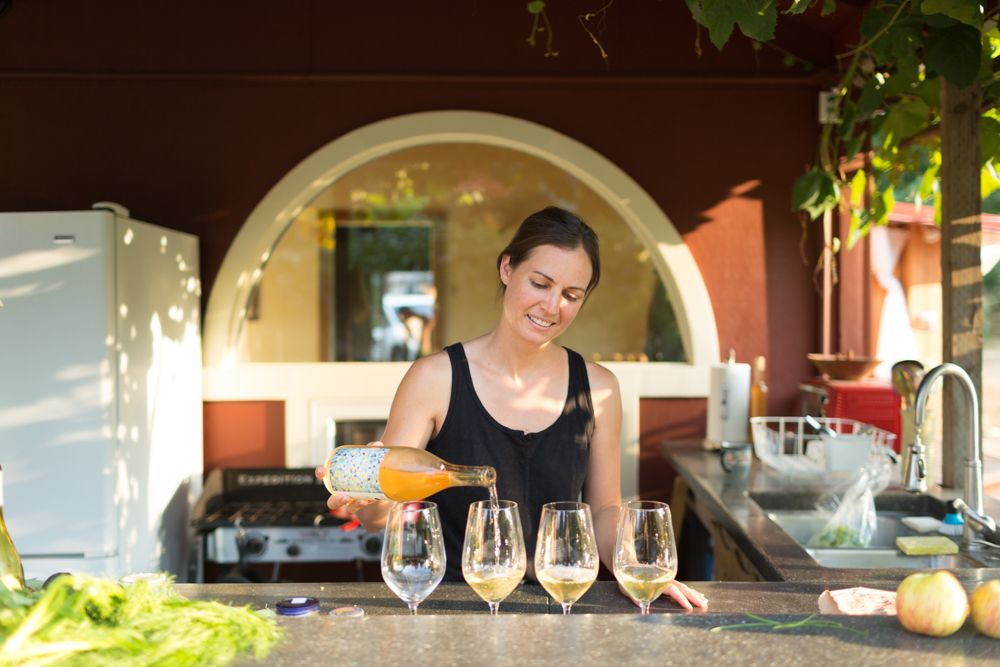 Verjus is a pressing of green grapes, sour, unfermented juice. It can be difficult to find, but look online, or, in your specialty food shop. It is often sold alongside vinegars.

In a small bowl combine garlic, Dijon mustard and verjus. Add olive oil in a slow and steady stream until emulsified. Set aside.

Just before serving, remove the garlic clove from the dressing and discard. Toss the salad with the dressing, season with salt and pepper and serve immediately.

In a small bowl combine garlic, Dijon mustard and verjus. Add olive oil in a slow and steady stream until emulsified. Set aside.

Just before serving, remove the garlic clove from the dressing and discard. Toss the salad with the dressing, season with salt and pepper and serve immediately.

“This is how I make salad,” vintner Martha Stoumen tells me, as she munches on the lettuce leaves of straight out of the bowl, preparing dinner in her outdoor kitchen. It’s just another variation of the kind of hands-on grazing and we’ve been doing for the past week, as I shadowed Martha through her dry-farmed vineyards and into her brand new Sebastopol winery. Martha and I are collaborating on project to produce our own verjus, a pressing of green grapes made from the discarded early-season prunings of underripe fruit. The tart, fresh juice is traditionally used in the place of lemon in French cooking, to make delicate vinaigrettes, and more recently, a favorite ingredient in cocktails and non-alcoholic beverages. Lucky for me, our project necessitates me shadowing Martha in her fascinating world of natural wine, soaking up every last drop of her deep knowledge while I can.

Martha’s interest in wine is an outcropping of her experience as an organic farmer — in her hands, wine is a way to bottle the sun, the soil, the deep character of a storied gnarly vine. It was her major in Environmental Studies and Italian minor at UCLA as an undergrad that led her to work on an Italian vineyard post graduation. “I was just trying to get a job, but I loved working with grapes so much, I ended up returning to school at Davis to get my Master’s degree in enology.” Soon, she was swept up into the international world of wine.

Young winemakers spend at least a few years “staging” for masters, learning the process from vine to bottle. In turn, they bounce around the wine regions of the globe, from South Africa to the Rhone, working in fields, sorting grapes, and doing an astounding amount of cleaning up. While it might seem like a lowly part of the job, it’s actually most critical — if you don’t clean really well, vinegar cultures spread and can contaminate the wine. “I started this when I was 21,” Martha says, “I’m done with the cleaning.”

Martha put in her time. She began her worldwide wine tour when she met an Australian winemaker while working a harvest in California, and together they moved to Australia’s Cape Mentelle. From there, she shipped off to Germany to work for a very small, traditional producer of Riesling. This was her introduction to the old-world way of making low-intervention wine. “The winery was a 498 year old facility, and it was so damp there, the entire ceiling was goopy with naturally occurring yeast. This yeast makes its way into the wine, so there’s no need to add anything to it.” The vineyard was set on dramatically steep terraced slopes. Their crew of international stagières built a monorail by hand, pounding stakes into the slate hillside. Martha describes the work as, “hiking Machu Pichu everyday.” And when the sun went down, it was her job to sort through the grapes, one by one, setting aside the fruit that had succumbed to “noble rot,” a desirable, naturally occurring fungus that attacks grapes in humid conditions. Those hand-selected shriveled raisins would be used to make Trockenbeerenauslese, a highly coveted, impossibly high-touch sweet wine.

“Nobody gets into wine for the money.” The financial pressures are great, and economic success is tethered to an increasingly fickle climate. As we picked her organic old vine Petite Sirah grapes, the wildfires were inching ever-closer, the visible smoke on the horizon threatening the crop, and ultimately, Martha’s livelihood. But it’s not difficult to understand where the appeal of this lifestyle might lie. During harvest, the sense of community is enough to carry through the rest of the year – hot days picking with new fascinating people from around the world are rewarded with world class wine and shared meals amidst the grapes. Vineyard work is a unique blend of manual labor, with access to white tablecloth restaurants, travel and a deeply knowledgeable sophistication. While there is little money to be had as a stagière on winery, but by the age of 29, Martha had lived in Tuscany, Sicily, West Australia, New Zealand, the South of France, and Germany. She tells me, “I grew up blue collar, but I still wanted a chance to see the world.”

In becoming the darling of the natural wine scene, Martha has not lost her youthful ambition to change our food systems and combat industrialized agriculture. Her long-term dream is to run a farm and learning center that might be financed by wine, but whose mission is to educate and impact California farming.

In the meantime, Martha’s wine is a teaching tool, an entré into critical environmental issues. Her grapes taste different because she farms without any irrigation at all, a highly unusual technique that forces the roots to reach further down into the earth in search of water at in earth’s deep mineral layer. Her yield is about one fifth of that of those industrial vineyards who use excesses of water, diluting the fruit and prompting winemakers to use additives to simulate any flavor at all. But as Martha and I picked 1000 pounds of her sculptural grape clusters, she tasted them at every stop, testing their sugar content and their acidity levels like a seasoned scientist with a incisive palate.

Moving from the vineyard into the winery, the crop dictates her every move. At each stage, Martha was always willing to reassess, to let the fruit tell us what it wanted to do, as we confronted each milestone en route to a bottled product. As her husband, Jon, a musician and wine enthusiast put it, “it’s similar to jazz. If you hit a wrong note, you can’t go back, you keep moving forward, keep evolving. There are a lot of expressions of beauty — Martha’s wine challenges our fixed ideas of beauty. ”