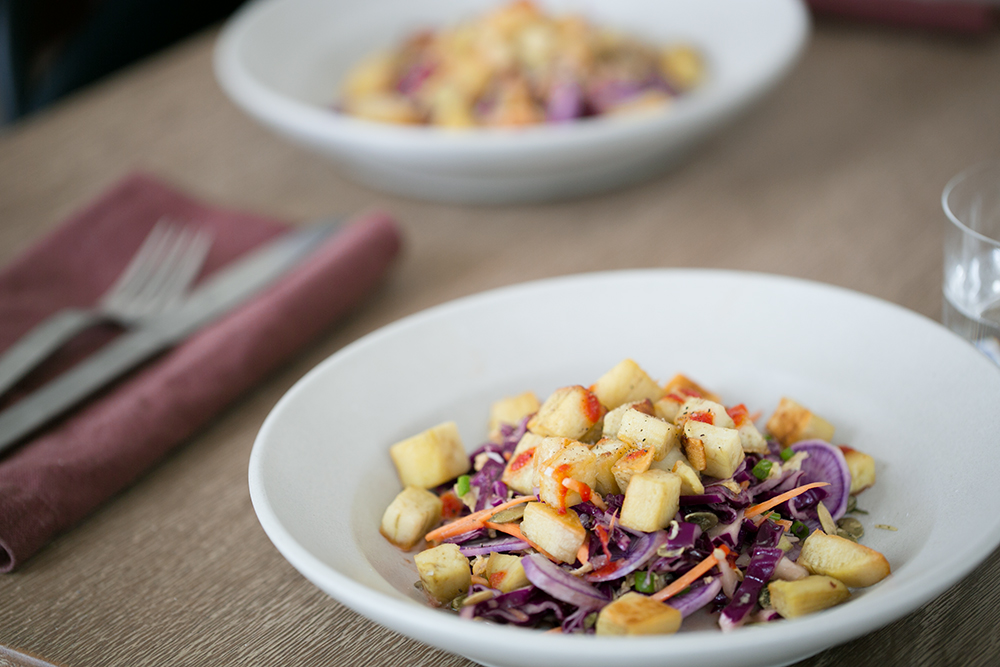 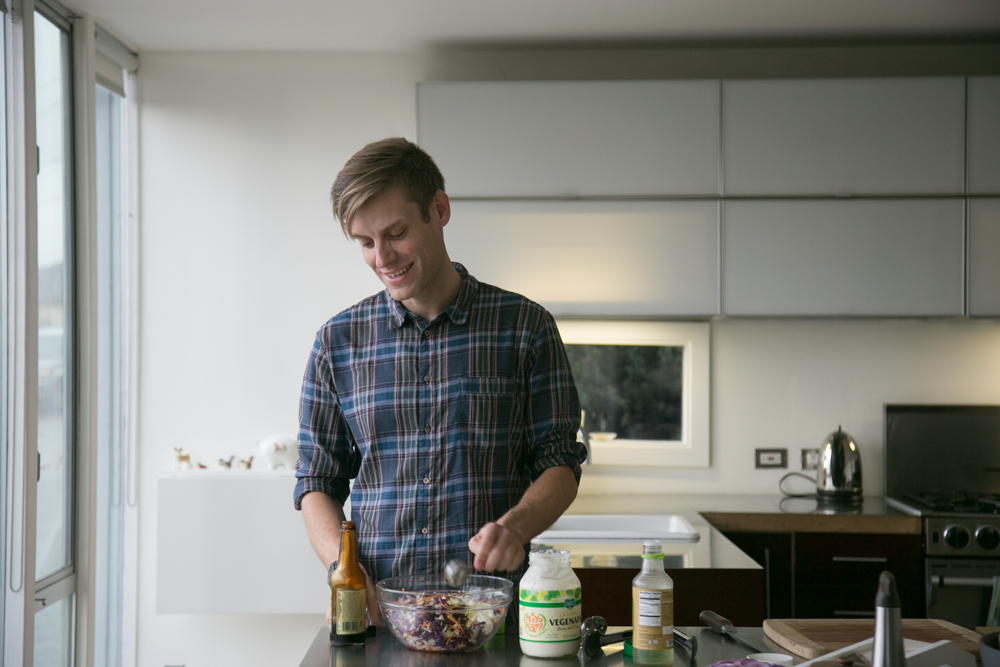 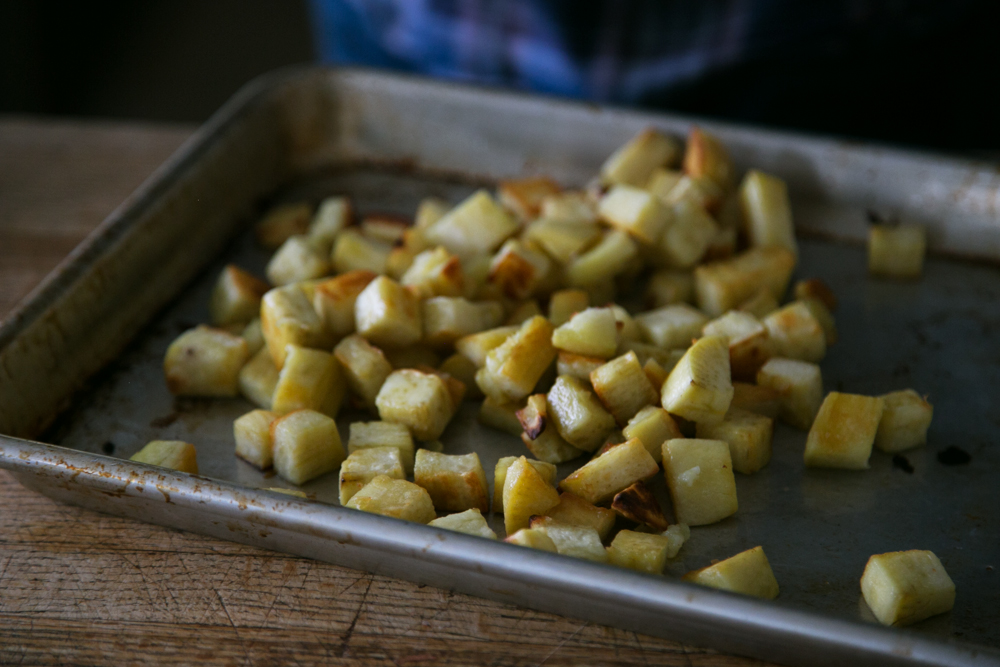 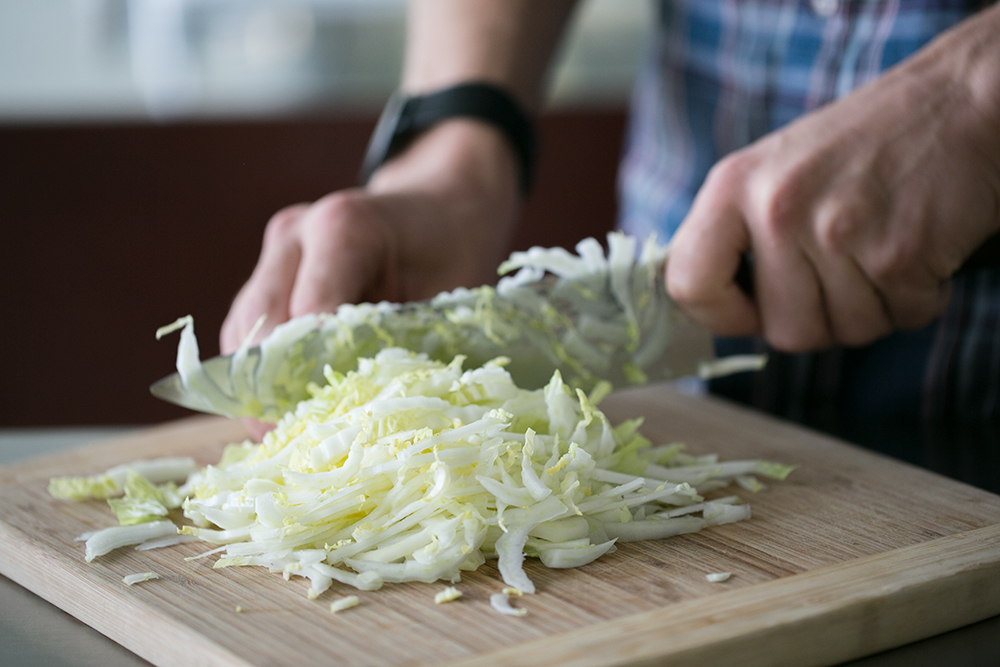 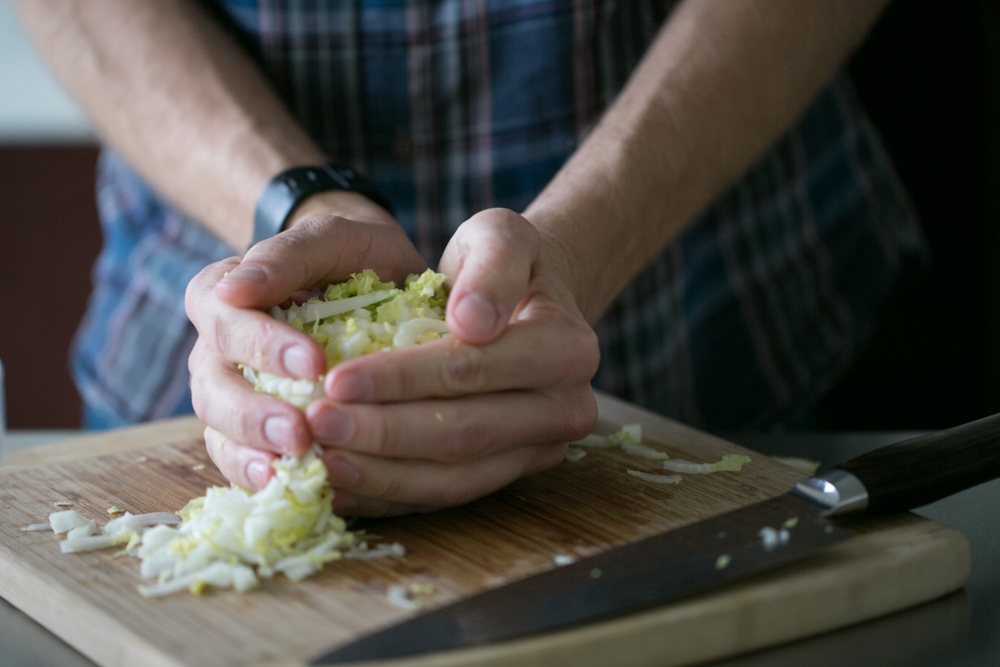 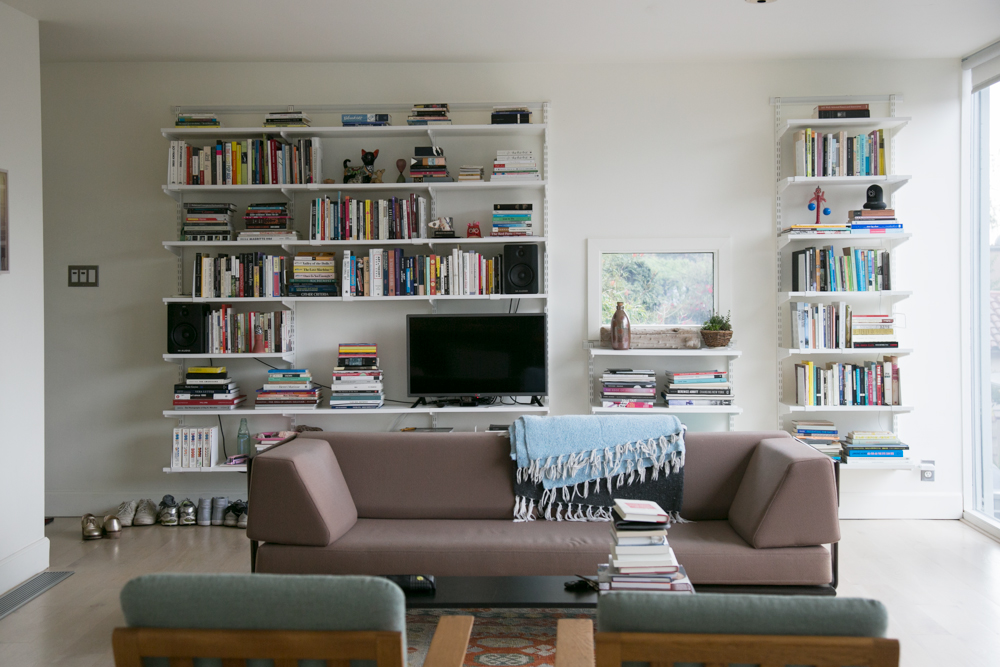 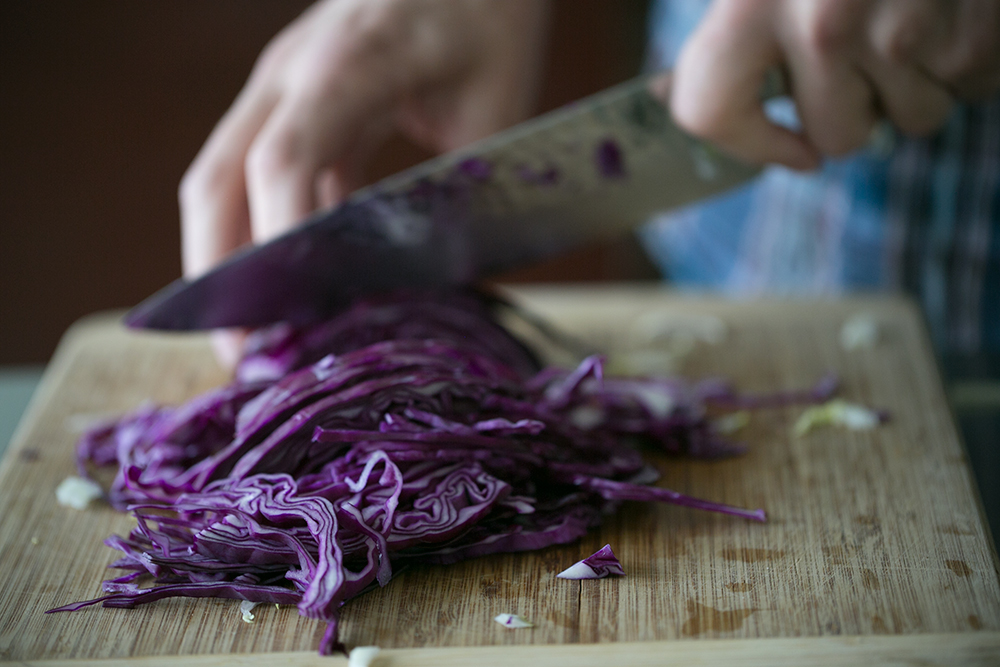 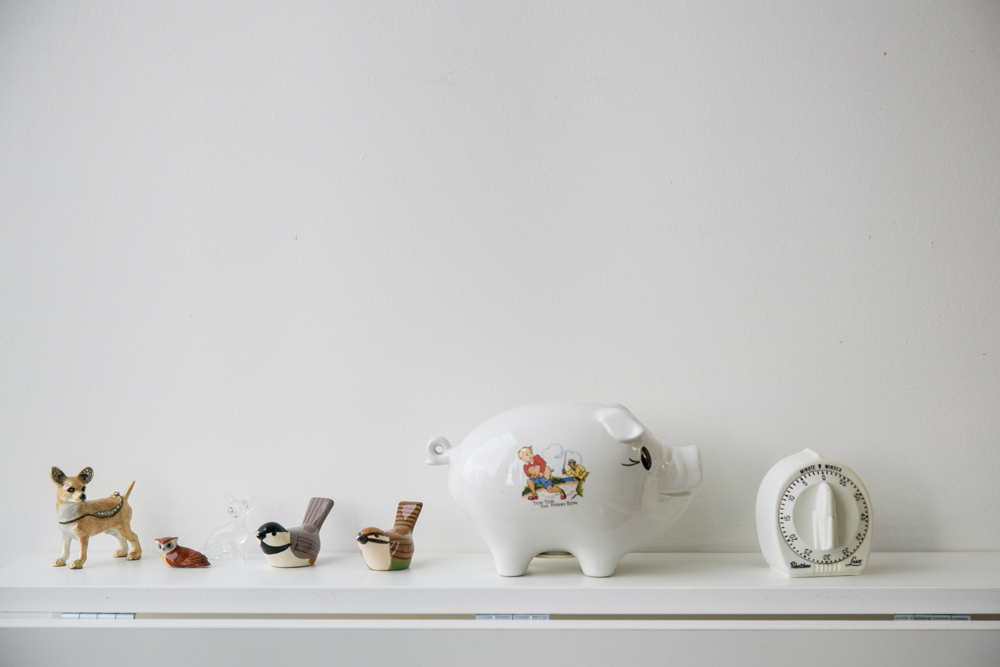 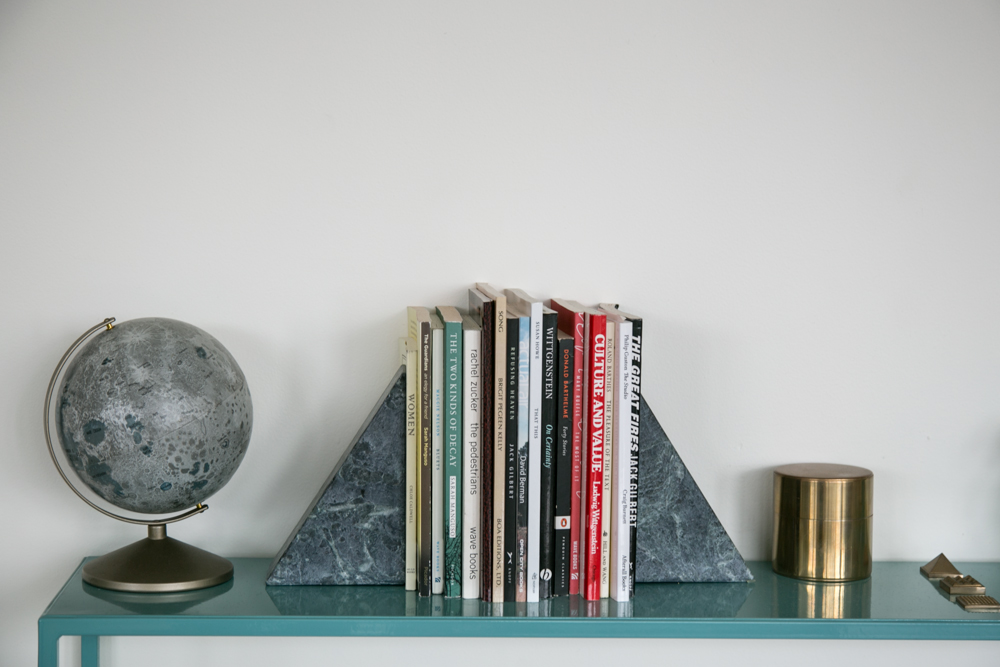 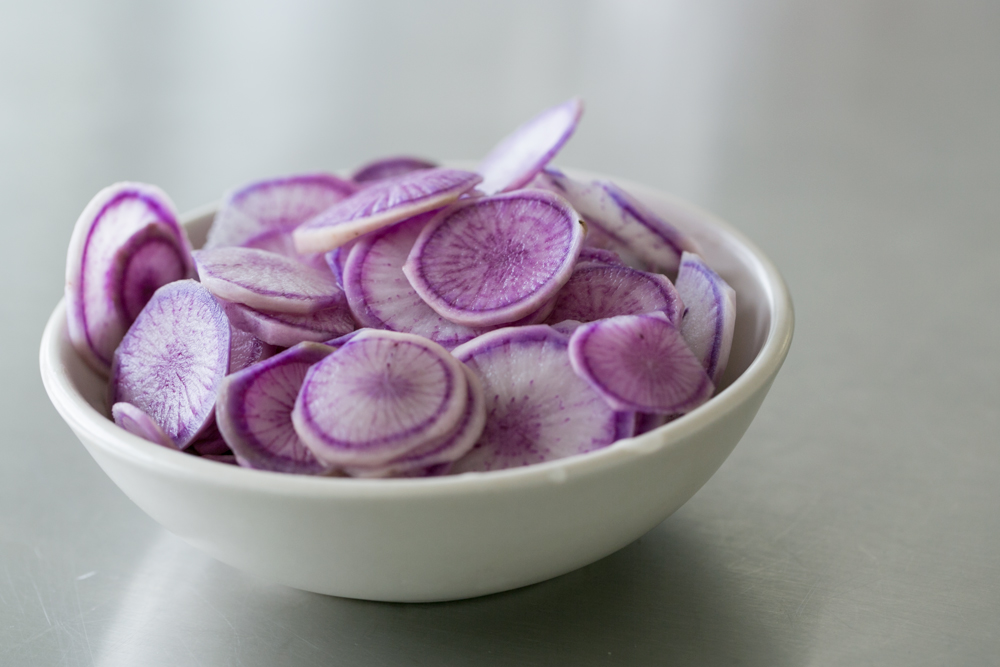 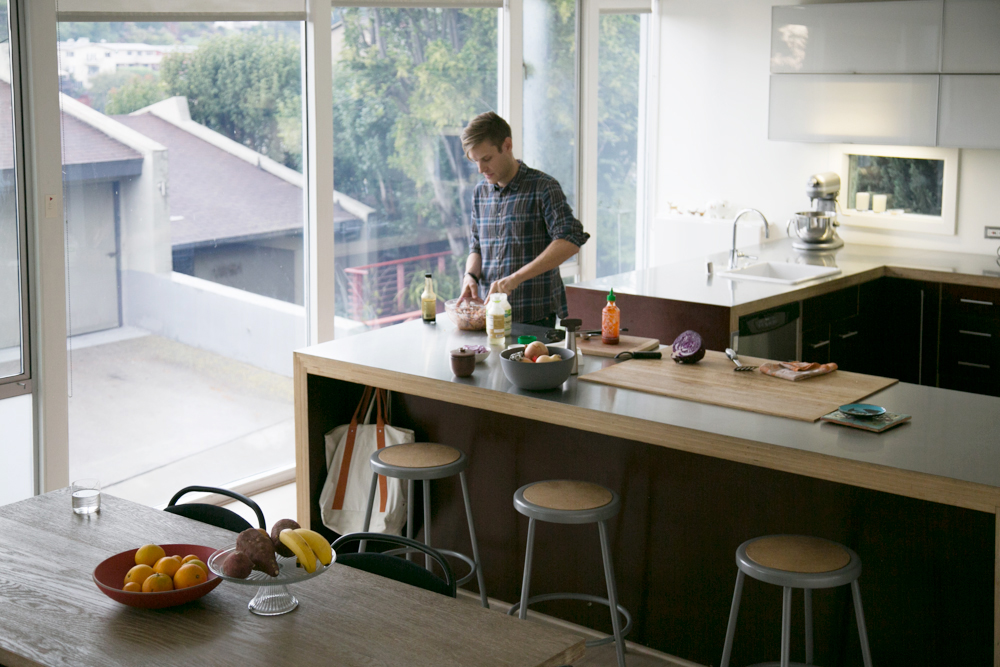 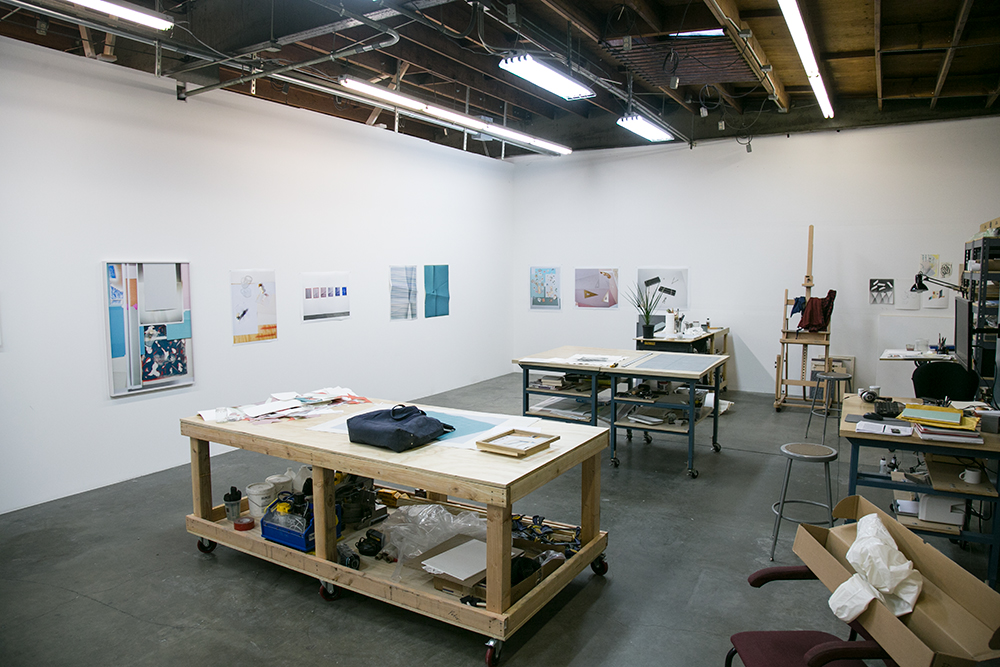 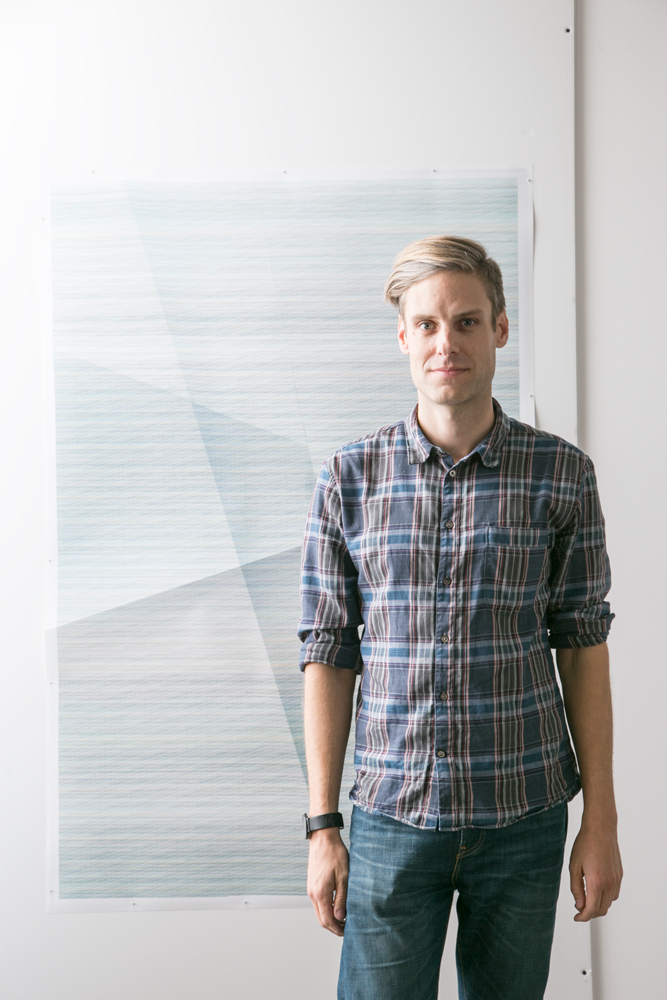 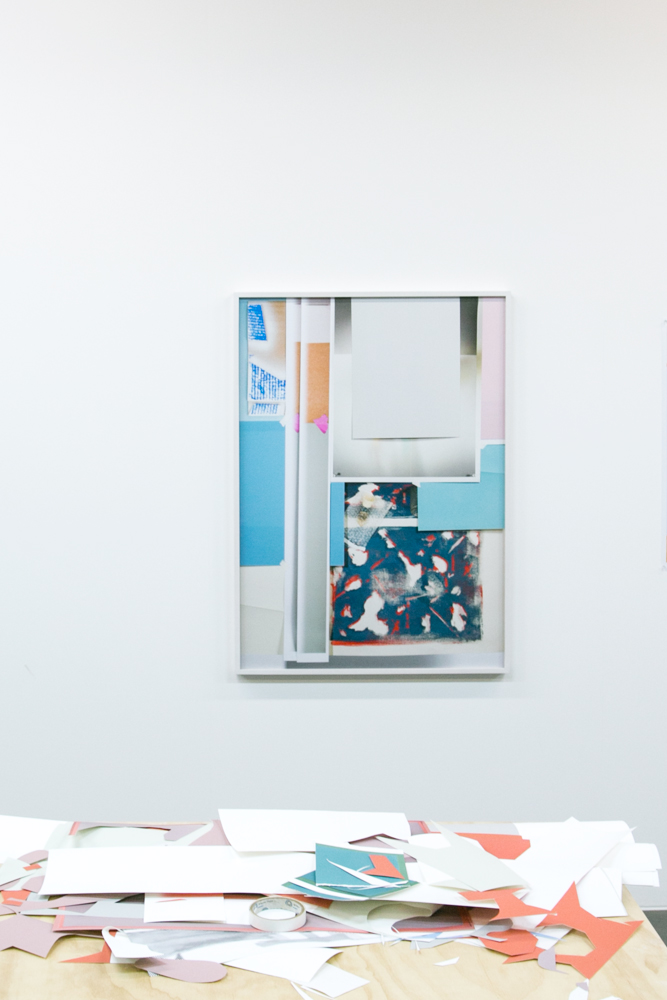 John uses shoyu, which is a Japanese wheat-based fermented soy sauce. Shoyu is a bit earthier, stronger and sweeter than soy sauce, but if you don’t have any on hand, soy sauce will do. Grape radish can be hard to find, substitute with daikon if that is available.

Preheat oven to 400 degrees. Cube the Japanese sweet potato and layer on a cookie sheet. Drizzle with olive oil, sprinkle with salt and pepper and roast for 25 to 30 minutes, or until tender and golden brown.

While the sweet potatoes are roasting, thinly slice the red and green cabbages, or shred in a food processor. Slice radish into paper thin disks on a mandolin slicer.

Whisk together the mayonnaise, sriracha, white vinegar and shoyu and set aside the dressing.

Toss the cabbage and radishes with the dressing, and once the potatoes have cooled to room temperature, add them to the mix. Top with sliced scallion and pumpkin seeds, and a dab more sriracha if a little extra heat is needed.

Preheat oven to 400 degrees. Cube the Japanese sweet potato and layer on a cookie sheet. Drizzle with olive oil, sprinkle with salt and pepper and roast for 25 to 30 minutes, or until tender and golden brown.

While the sweet potatoes are roasting, thinly slice the red and green cabbages, or shred in a food processor. Slice radish into paper thin disks on a mandolin slicer.

Whisk together the mayonnaise, sriracha, white vinegar and shoyu and set aside the dressing.

Toss the cabbage and radishes with the dressing, and once the potatoes have cooled to room temperature, add them to the mix. Top with sliced scallion and pumpkin seeds, and a dab more sriracha if a little extra heat is needed.

In 2008 I attended the The Mountain School of Art, an academic program for visual artists that held its classes in a Chinatown watering hole called The Mountain Bar. This was an artist-run school accepting 10-15 students a year. Half of the students were local to L.A. and the other half came from Europe for the 3 month program. Lectures were given by international human rights lawyers, editors of major magazines, world renowned artists and scientists. On top of that, the school was totally free… and did I mention our classes were held in a bar? Sounds like a dream, right?

Actually, it was sorta awkward. For some reason, the group didn’t quite gel, and our discussions never gained momentum. Turns out, sometimes it takes more than a few drinks to get some artists to loosen up. Luckily, John Houck was in the class with me, always a smiling face, and really super smart but never a know-it-all. If the group didn’t always manage to get the dialogue off the ground, John was always available after class. He has an unreal capacity for knowledge, having had careers in architecture, computer programming, cycling, academia (he teaches at UCLA), and he is currently a highly sought after fine art photographer. Despite all his diverse accomplishments, John is incredibly easy to be around; when your CV is this impressive, I guess you just don’t have anything to prove. He did work really hard on his salad, which was, not surprisingly, visually compelling, well executed and unlike anything that we have seen on the blog to date.

The day we shot was an unusually cold and rainy day in Souther California, so don’t be surprised if John reappears on the blog with a salad made from his kitchen garden. I guess I forgot to add “green thumb” to his list of accomplishments.

John Houck In His Own Words

JS: What do you do when you are not making art?

JH: Recently I have been obsessed with baking bread. Last time I was in San Francisco I had a piece of toast that blew my mind. I have been trying to recreate that bread here in LA. I like cooking that involves precision and baking bread fulfills this; weighing the ingredients, keeping the sourdough starter alive, and timing everything so the bread rises correctly. Unlike cooking a single meal, you have to keep checking in on your bread over several days. I also like that in order to keep the starter going, I bake more than I can eat and end up gifting many loaves. It’s a generative kind of cooking and reminds me of gardening and the persistence required to make a body of work, and in the end, you share your production with friends and give it to the world as a gift.

JS: Shit, had you told me that, I would have asked you to make me a loaf to go with our lunch!

JS: You mentioned that you could imagine your next career (when you tire of your success in the art world, of course) as a psychoanalyst. Why?

JH: I have been in analysis for five years and it has had a great influence on me and my work. I came to the art world after many years as a software engineer. Working with formal languages and highly logical systems colored my experience. In analysis, the work of reminiscence, dreamwork, and free association cracked open those rigid ways of thinking. When I become involved in something I tend to go all in. An important discovery for me in analysis has been the way I tend to lose myself in a world. Before my career as an artist, I had been a cyclist, computer programmer, and an architect. For a complex set of reasons I quit each of those fields once I became successful at them. So while I fantasize about becoming an analyst, a lot of my work in analysis has been about how I can remain an artist now that I have attained a certain level of success. Fortunately, art is a field where I can integrate my interest in analysis. The world of software didn’t have that latitude, it tends toward definitive answers. Maybe I’ll create a performance where I’m a psychoanalyst.

JS: You have had a very busy year. How has commercial success affected your daily practice?

JH: I bristle a bit at the word commercial. Commercial implies a broad acceptance and perpetual growth. I’m fortunate that I have found support for my work, but it’s such a small and specialized market, I think it’s both non-commercial and in some ways transcends the commercial. Prior to this support I worked contract software jobs to fund my studio, now I’m in the studio all of the time. It’s an incredible feeling and it seems like the sweet spot. I have the resources to live and make my work, if I made a  bunch more money or a lot less than it would be much more complicated.

JS: Now that your work is being collected, do you think about where it ends up and about who owns it?

JH: It is a consideration for me, but my gallerist in New York, On Stellar Rays, does a brilliant job of navigating those shark infested waters on behalf of me and my work. Getting to know some of my collectors has been a heartening experience. There are some sharp collectors out there that I have learned a lot from. In the past two years my work has been acquired by several museums and this outstrips my concerns about any nefarious collectors out there.

Julia: Now that you are a famous artist, I like knowing that I gave you one of your first shows. You were the first artist I showed when I ran my artist run space in L.A., Workspace. What was that project all about?

John:  You gave me my first solo show! I haven’t thought about that piece in a long time. I’m reminded of it occasionally because it still shows up in search results. I created that sculpture layer by layer by tracing sections of a digital 3D model of a lion onto sheets of styrofoam. I then glued the sections together and carved into it. At the time, I was living on the west side of LA and coming over to visit workspace was an entirely new world to me. I explored the neighborhood and was taken with those sculptural lions that guard everything from residences to auto body shops. I was also referencing the end of Mike Davis’ book City of Quartz, where he talks about LA’s disregard for its past with the example of the original LA Zoo lion sculptures that ended up in a wrecking yard in Fontana. I also created a cage for the lion, placed it in the center of the gallery and then cut out paper shapes that corresponded to the negative space between the lion and its cage, from various perspectives, and placed those on the wall. That project was about tracing things from multiple perspectives and the collapse of spatial models into two dimensional projections. It was a formative project for me.

JS: Can you describe the way in which your father influences your work (I am thinking about the paintings, but other ways as well)? How that relationship inspires you, but also might create an unusual family dynamic?

JH: Growing up my family was quite close. When I was in elementary school we lived in the mountains of Colorado at ten thousand feet elevation in a double wide trailer. We had to rely on each other because there weren’t a lot of other people around. However, with that sense of closeness can come a feeling of cultural isolation. There wasn’t much of a world outside our family and we did all of the same activities. One example is that since I was very young I periodically get interested in painting and drawing, and each time I make this effort in earnest my Dad mirrors it by also starting to paint. This creates a tremendous amount of competition between us but also a kind of closeness. This is further complicated by the fact that my father’s paintings are quite good, despite having no training or experience of art. I’m currently working on a body of work that explores this oedipal struggle through painting and the confusion of intimacy with mimicry.

JS: You and I had similar experiences where our parents purged our childhood belongings, which in turn made their way into our art. Can you tell me about how that came about and why you are compelled to use these very personal objects as material in what turn out to be somewhat formalist photo-collage?

JH: My parents started giving me objects from my childhood in a ceremonious way once I was in analysis. I think it was a way for them to say, “you are now grown up, get this shit out of our house,” but also, “look at these things, they prove you were our child.” Over the last five years, each time I saw them they present me with one of these objects. These ambivalent gifts mirrored the work I’ve done in analysis to feel psychically free from my parents. As these objects accrued in my studio it occurred to me that rephotographing them in the way I made my prior body of work would be a good starting point as the way I make my photographs by re-photographing them is not unlike the act of remembering. The other day, I overheard an older gentleman say that you spend the first half of your life acquiring objects and the last half of your life trying to get rid of them. It seems like being in your thirties is the point of inflection from acquiring to letting go.