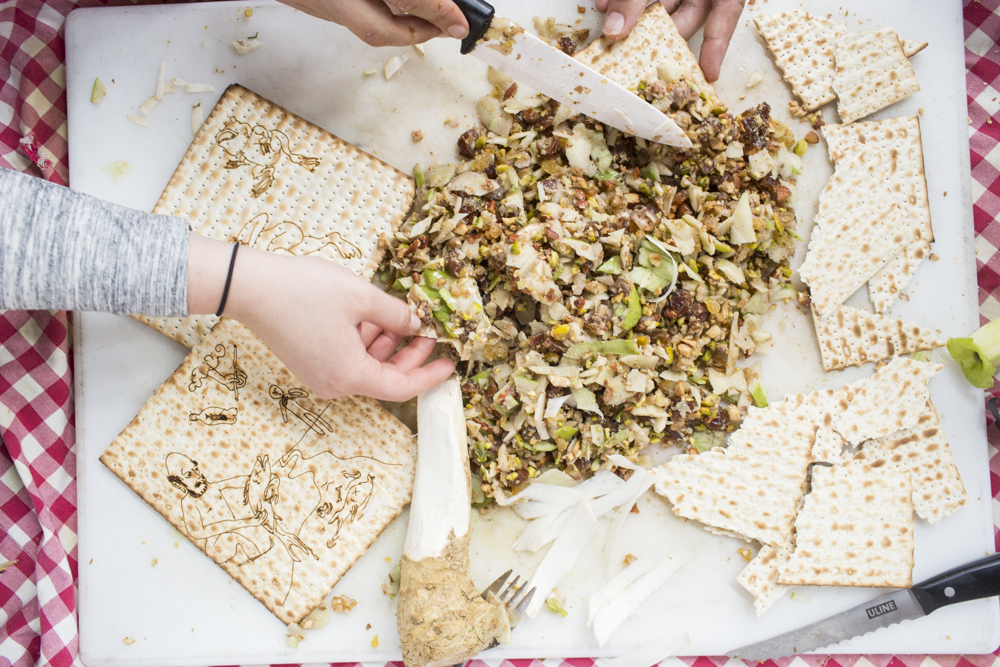 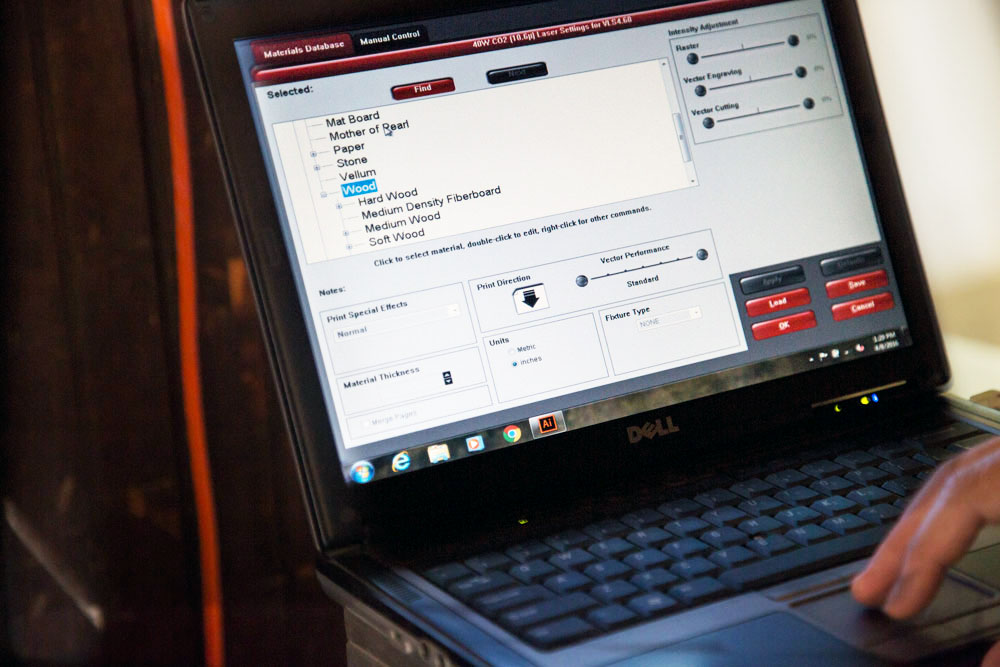 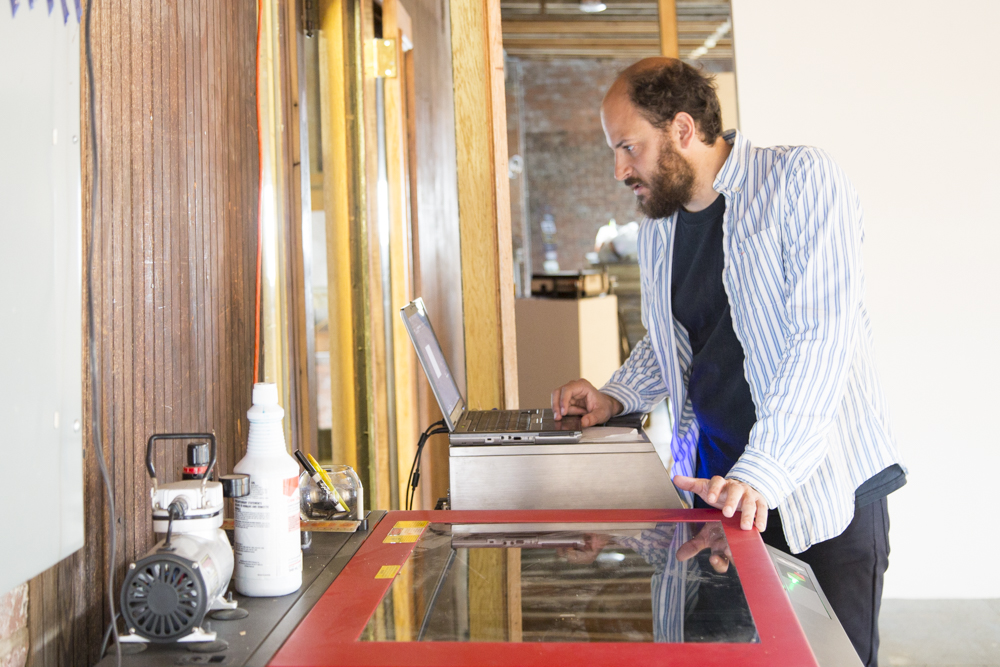 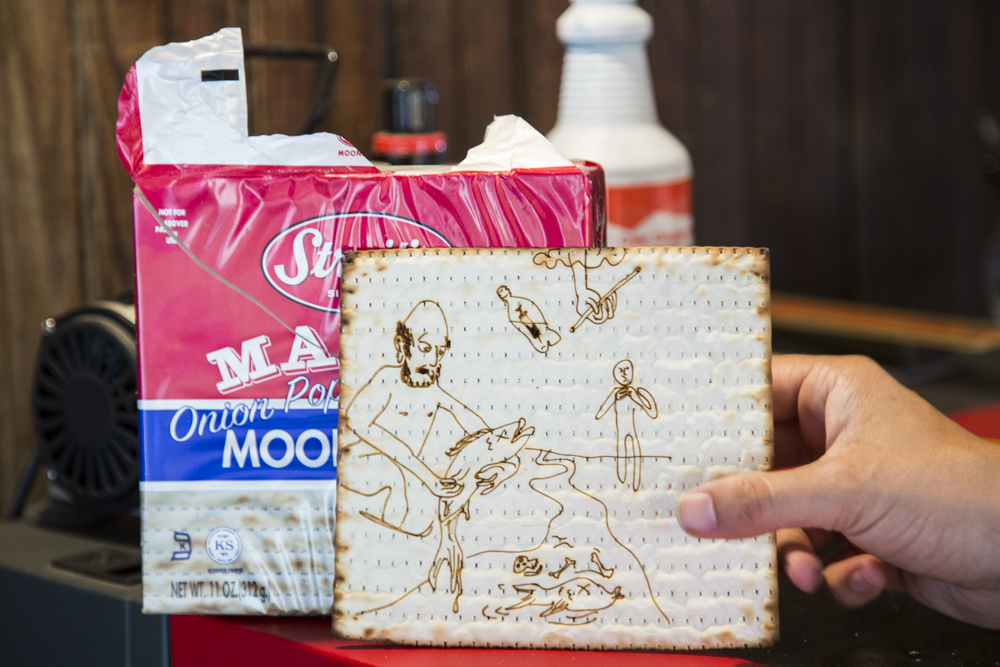 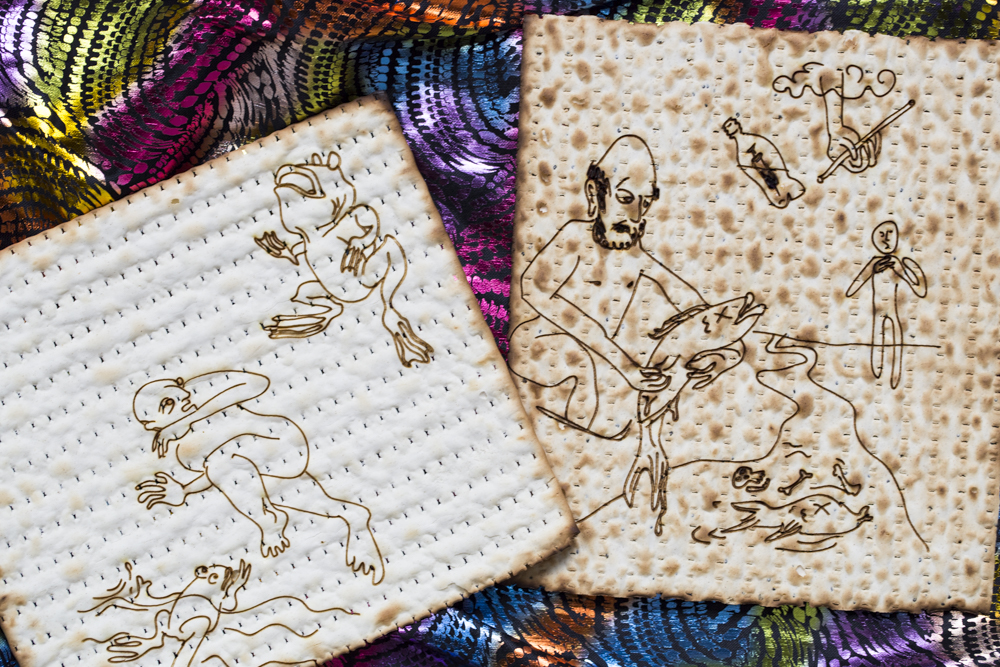 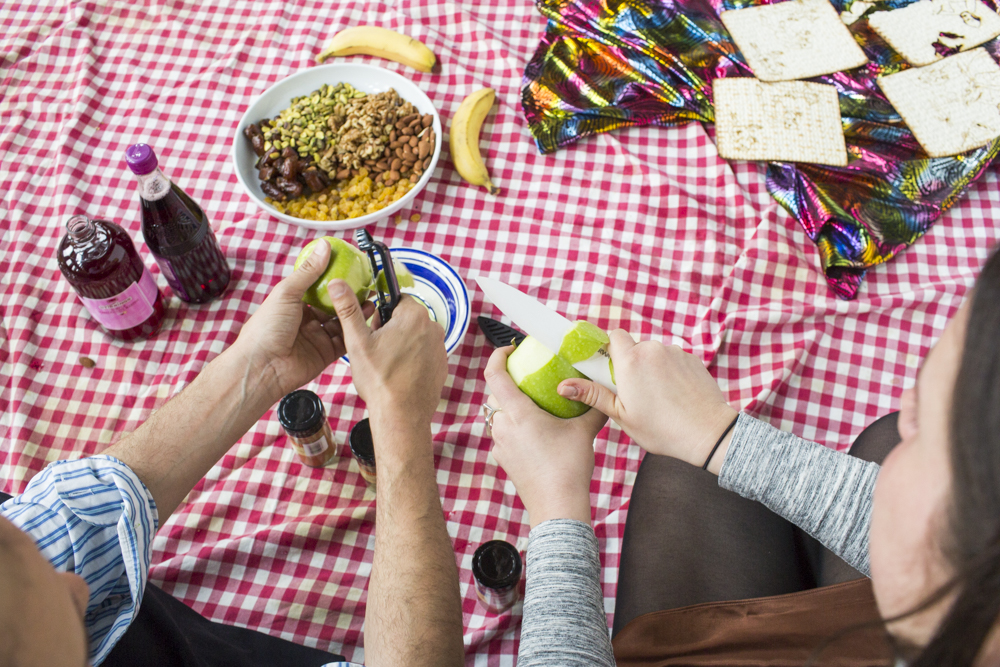 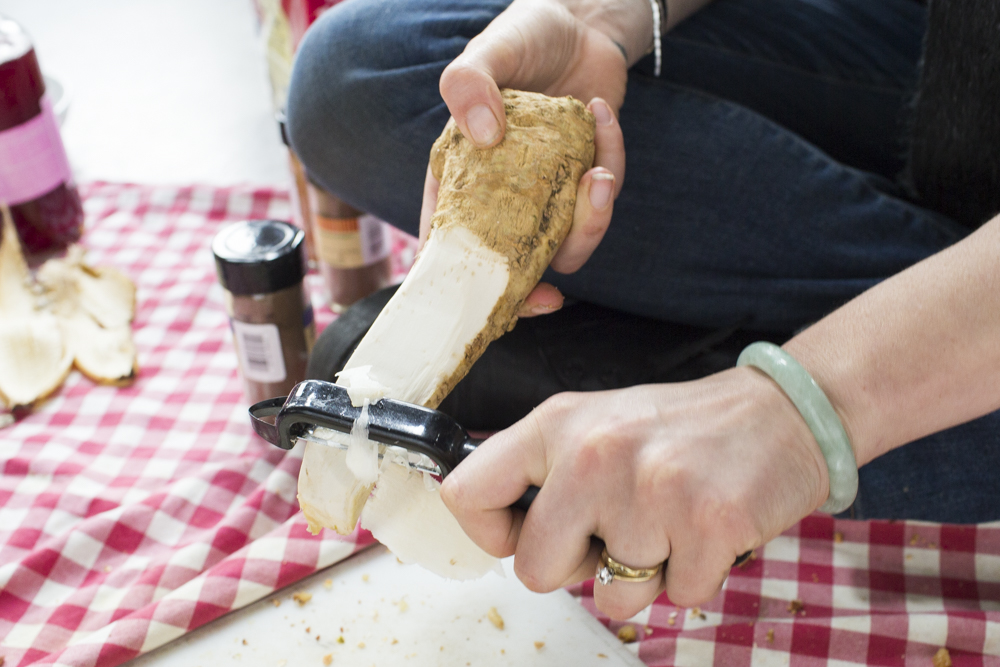 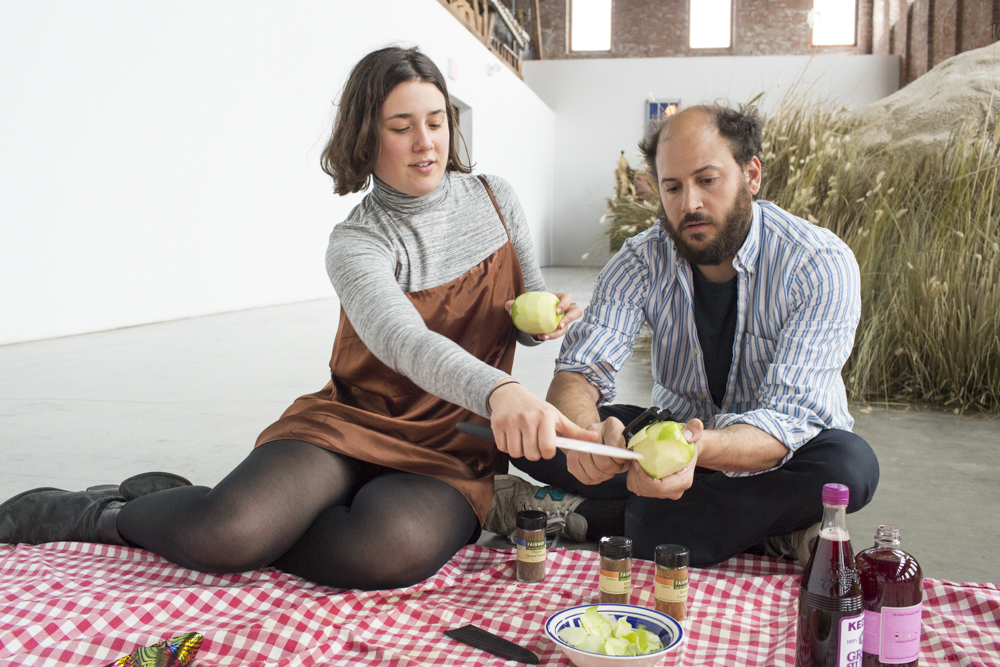 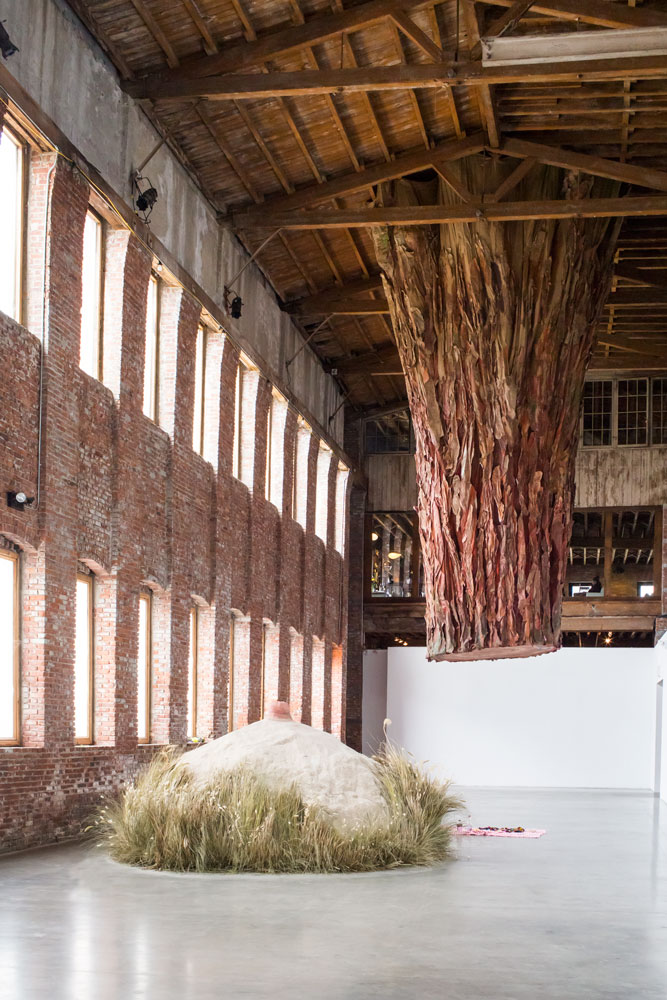 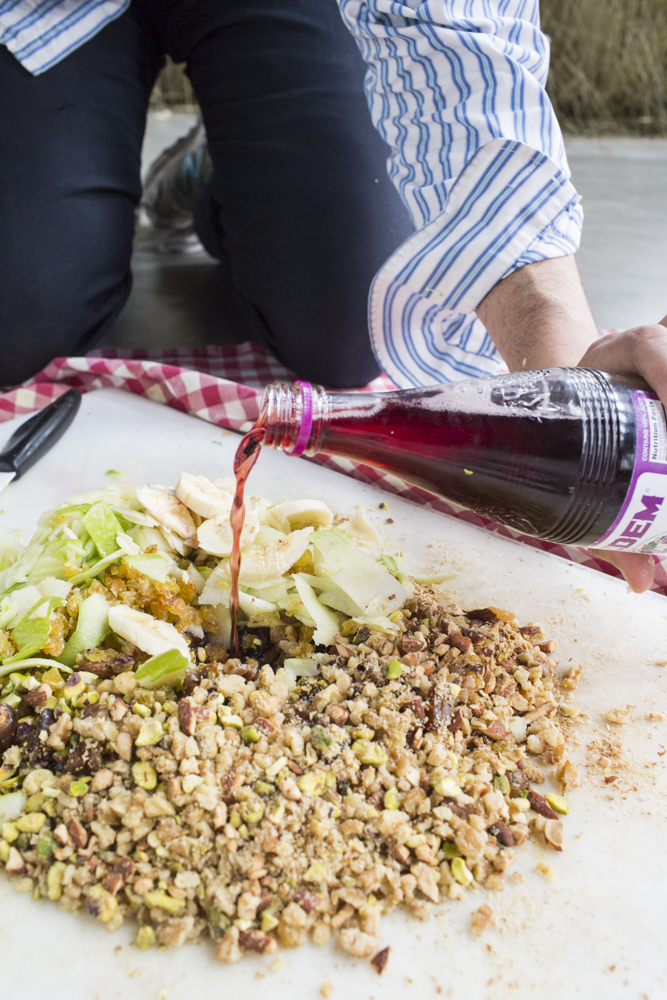 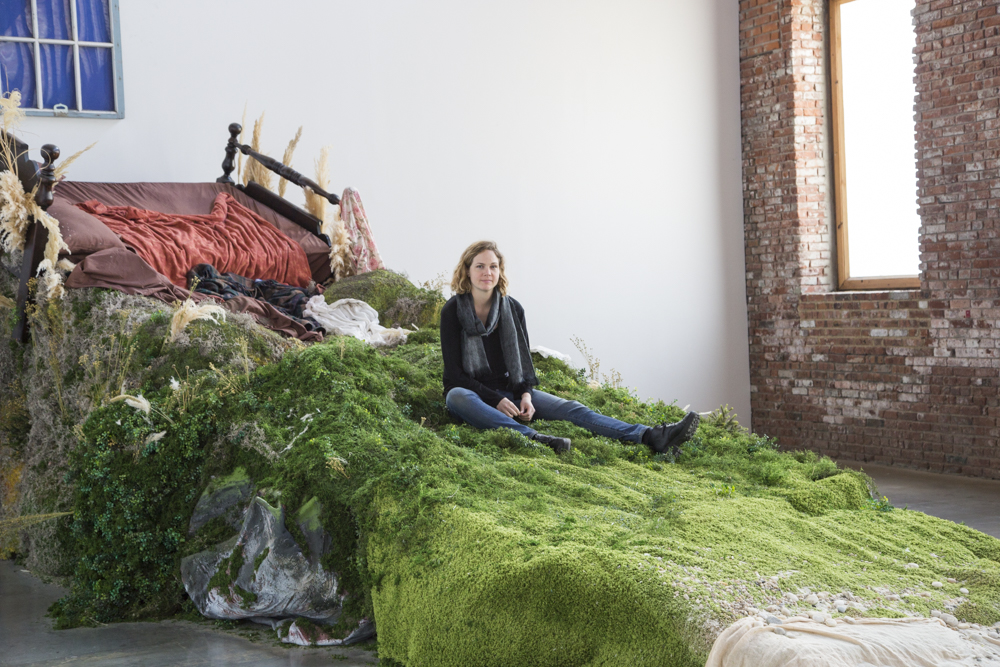 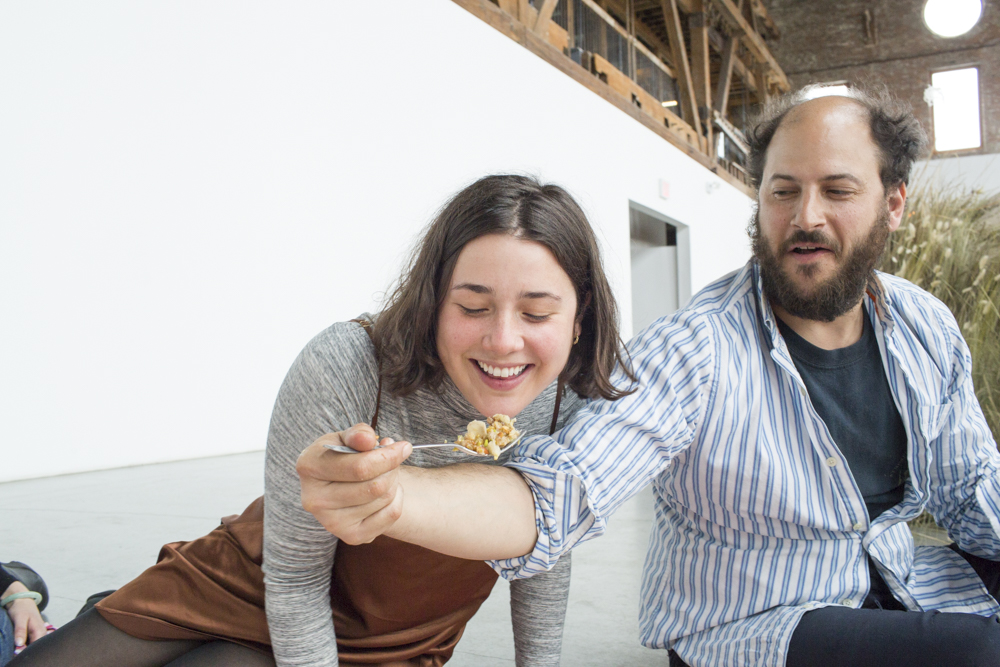 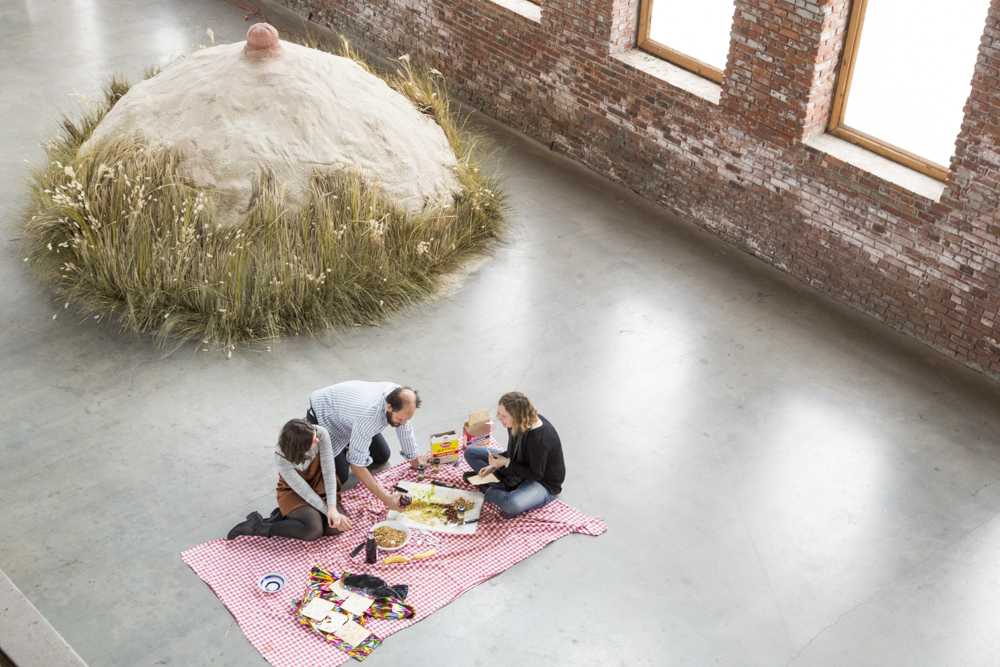 Charoset (pronounced “ha-row-set”) is an essential component of any Jewish Seder, but every Passover I wonder why we don’t this make this salad year-round. Charoset is the by far the best part of the Seder plate, and not just because the other options are lamb shank (just the bone), a hard boiled egg and curly parsley dipped in salt water. This sweet and nutty topping for matzoh is, like most things involved in this holiday, interpreted differently in every home, and Joey’s was certainly the first I ever tasted that included banana. Like all the foods we eat at the Seder, Charoset is a symbolic part of the story of Exodus. Eaten between two pieces of matzoh with a smidge of the “bitter herb”(horseradish), this symbolizes the brick and mortar our enslaved ancestors were forced to use when building Pharaoh’s empire. On one level we recall the affliction of our ancestors, but on another, the apples and nuts remind us of our sweet eventual freedom. With some Seders lasting hours, we thank God that this symbolic sandwich happens to be delicious. Joey was missing nearly every tool needed for this recipe, so we improvised, you know, like the Jews would have done in the desert…We used a simple vegetable peeler, a chef’s knife and a large cutting board (ours was 18″ x 30”) to make the Charoset. Short on plates, we dove in, sharing the sweet pile of goodness right from the cutting board and scooping it up with our illustrated matzoh. If you are serving this like a normal person at a dining table and not on the floor of a gallery, I suggest chopping ingredients one at a time and adding to a large mixing bowl to combine.

Using a vegetable peeler, shave thin slices of the apple onto your cutting board until you reach the core. Pile nuts, dates and raisins on the board and chop until you have pea-sized pieces. (Joey used the bottom of a bottle to chop the nuts, which actually worked quite well). Make a dent or a well in the center of the chopped nuts and fruit pile and pour the sweet wine inside. Mix using your knife.  Slice super thin pieces of banana on top and stir gently to combine. Sprinkle cinnamon on top. Using your vegetable peeler, shave a pile of fresh horseradish on the side and serve with matzoh.

Using a vegetable peeler, shave thin slices of the apple onto your cutting board until you reach the core. Pile nuts, dates and raisins on the board and chop until you have pea-sized pieces. (Joey used the bottom of a bottle to chop the nuts, which actually worked quite well). Make a dent or a well in the center of the chopped nuts and fruit pile and pour the sweet wine inside. Mix using your knife.  Slice super thin pieces of banana on top and stir gently to combine. Sprinkle cinnamon on top. Using your vegetable peeler, shave a pile of fresh horseradish on the side and serve with matzoh.

Joey Frank is the kind of person that is nearly impossible to pin down down, but who you love to run into; luckily, he seems to be everywhere — I bump into him on planes and at openings, and on any given street corner in Red Hook Brooklyn. Joey is a modern day flanneur, and he is even a muse to some. He is the kind of artist who is always thinking, consumed by the slightest prompt, using every opportunity to make something new with no parcity of effort. Joey has been working on the idea of a laser-cut illustrated matzoh for months, postponing our salad session thrice in need of more time to R&D. The laser cutter is a delicate but powerful tool, shooting a beam of light onto delicate matzoh that can easily burn if not controlled. Joey had to get this just right, so he wouldn’t mar his detailed drawings of the plagues. He had re-imagined these parables with himself as the main character, facing zombie frogs, used needles and fish dripping with blood (clearly some creative license was employed here). This would be a personal telling and interpretation of the story, and lucky for us, he is working on the other eight as we speak.

Joey is the editor-in-chief of Intercourse magazine and a curatorial advisor at Pioneer Works, the 25,000 square foot non-profit arts space in Red Hook, Brooklyn. This arts center is a world unto itself, with studio spaces, and a daily schedule of performances, events and exhibitions, like the one the show that is currently on view by artist Molly Lowe, another magical creature and dear friend who joined us for our holy picnic.

Joey Frank In His Own Words

Julia Sherman: What does the story of Passover mean to you? Why were you inspired to reinterpret it for our salad shoot?

Joey Frank: The story of Passover always seemed like a sort of Jewish Thanksgiving for me, though the central story of bondage makes it feel more like the Jews’ history of being slaves in Egypt and makes me identify the Jews more with the Native Americans than the Pilgrims. Part of the storytelling aspect of Passover also appeals to me as a participatory dinner way of storytelling–the participation aspect reminded me of your whole salad thing.

JS: Charoset is so fucking good. Do you really think it counts as a salad?

JS: What do you do at Pioneer Works? If you didn’t work there, where would you work? I actually can’t imagine you anywhere else!

JF: Well, I have been involved with Pioneer Works since its inception, that’s why. When Dustin bought the building I asked if I could use part of it as a studio while it was under construction, so I actually worked in there before the plumbing and electric, before there was any glass in those beautiful rows of windows. The suite of paintings and connecting sculpture that I built on the third floor was one of the first exhibitions in the main cathedral-style hall of Pioneer Works (it was called “Intercourse” at that time) and it was those paintings and that figure 8 train track that were hanging when Superstorm Sandy hit Red Hook. I have been living in the neighborhood for 8 years now and have helped shape Pioneer Works along the way with curatorial input and editing the magazine Intercourse. It’s been a light touch, mostly just watching everybody work to make it what it has become.

JS: When I first met you, you had no shirt on and half a beard. We were seeing a film screening in a church. What inspired that look, and is embarrassment an emotion familiar to you?

JF: Yes, I remember, it was just after my first solo show in 2010 actually; I was still coming to terms with feeling embarrassed about my need and want to make art. I had this success in producing a documentary film “Manda Bala” which had taken me six years of working with my friend Jason Kohn and which won Grand Jury Prize for documentary feature at Sundance in 2007.  It was such an early and large professional feeling of success that I became embarrassed about not moving to LA but instead wanting to make artwork in NYC. When I had that half beard, it was because my first show, “Closets: the Inequality of Experience,” was sort of unfinished-feeling and I wanted my face to look that way too. That show was all about my nascent shyness, me coming out of my closet to myself as an artist. It actually started when I wanted to make paintings of this pewter World Trade Center statuette and feeling totally guilty and embarrassed and needing to build a freestanding closet, complete with hanging clothes, as an enclosure to hang those paintings.  There were six free standing closets in that show. Adam came and saw them!

JS: You are an artist. How would you describe your work?

JF: My work has continued with humor about construction and about making craftsmanship naked enough that it can become its own figure for the viewer. To anthropomorphize the construction so that it can be a character on plane with the cartoon or figure content of the work.

JS: You are also a muse! Is that something you identity as? Tell me what you are doing in Zurich right now!

JF: So sweet, Julia! Yes, part of me has always been a performer; I’m writing you from Zurich the morning after a very successful performance with Shana Lutker of her theatrical lecture at the Cabaret Voltaire. The program was part of the 100-year celebration of Dada. To identify as a muse seems connected with that particular charismatic need to perform for different levels of audience comprehension simultaneously.  It doesn’t hurt to be as handsome as a fawn.

JS: Your Instagram handle is sphynxtits. Sphinx tits have appeared in your work? What’s up with your thing for sphynx tits?

JF: Yes! The tits of the Sphinx where mystifying to me.  Something about puzzlement of casual consideration of ancient history appeals to me.  All over art and architecture from antiquity there are these beautiful sphinx, with their firm pectoral breasts. But wasn’t the sphinx Egyptian? The huge Sphinx of Giza has no tits! It was actually the Romans or Greeks that slapped tits on the sphinx and made the half-lion creature female. It might have begun as a sort of Western slander of Ancient Egypt–the real mindfuck is that Sphinx of Giza was built more than 2,000 years before the Roman Empire, so the distance between the first person to put tits on sphinx and the ancient Egyptian Sphinx is roughly 2,000 years, the same as the amount of time that has passed between the Roman Empire and me using @sphynxtits as my Instagram.

JS: Tell me about the two plagues you depicted on the matzoh for us. What do you want my readers to take away from the Passover story?

JF: Matzoh seems like one of the most important parts of Passover, that there wasn’t time for the bread to be leavened so we eat these square crackers in honor of those unrisen loaves.  Naturally I would want to laser-cut all ten plagues on matzoh but only got around to drawing the first two: “Water into Blood” and “Frogs.” The plagues were the “language” God used to “convince” the Pharaoh of Egypt to release the Israelites from slavery. It seems that the Passover Seder functions both as a metaphor for our own personal feelings of enslavement but also a reminder of people in war-torn places on Earth, or in “peaceful” industrial slavery today. I’m a very secular Jew, but the message of Passover seems to be that personal and global emancipation begins with health and community.