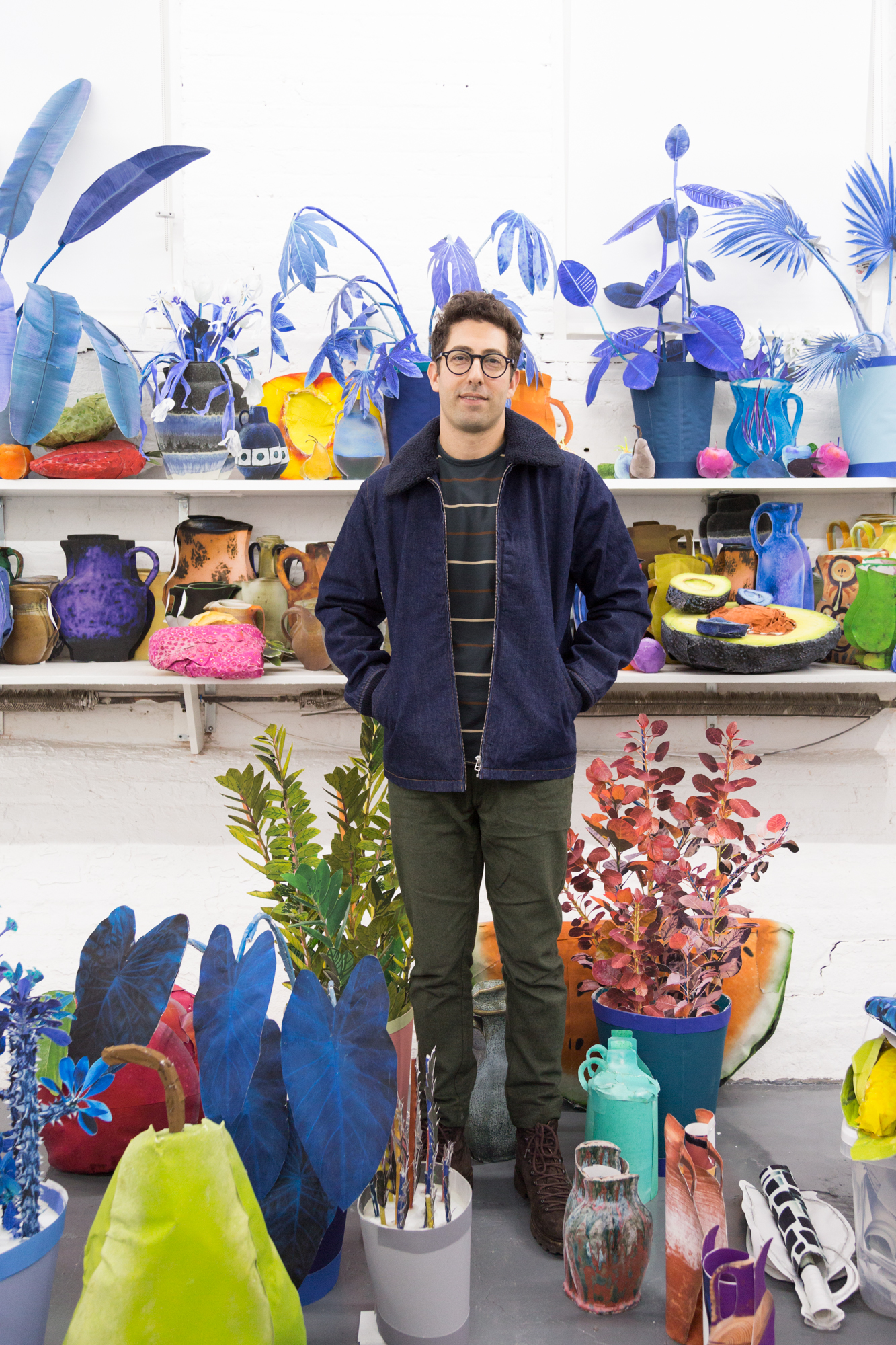 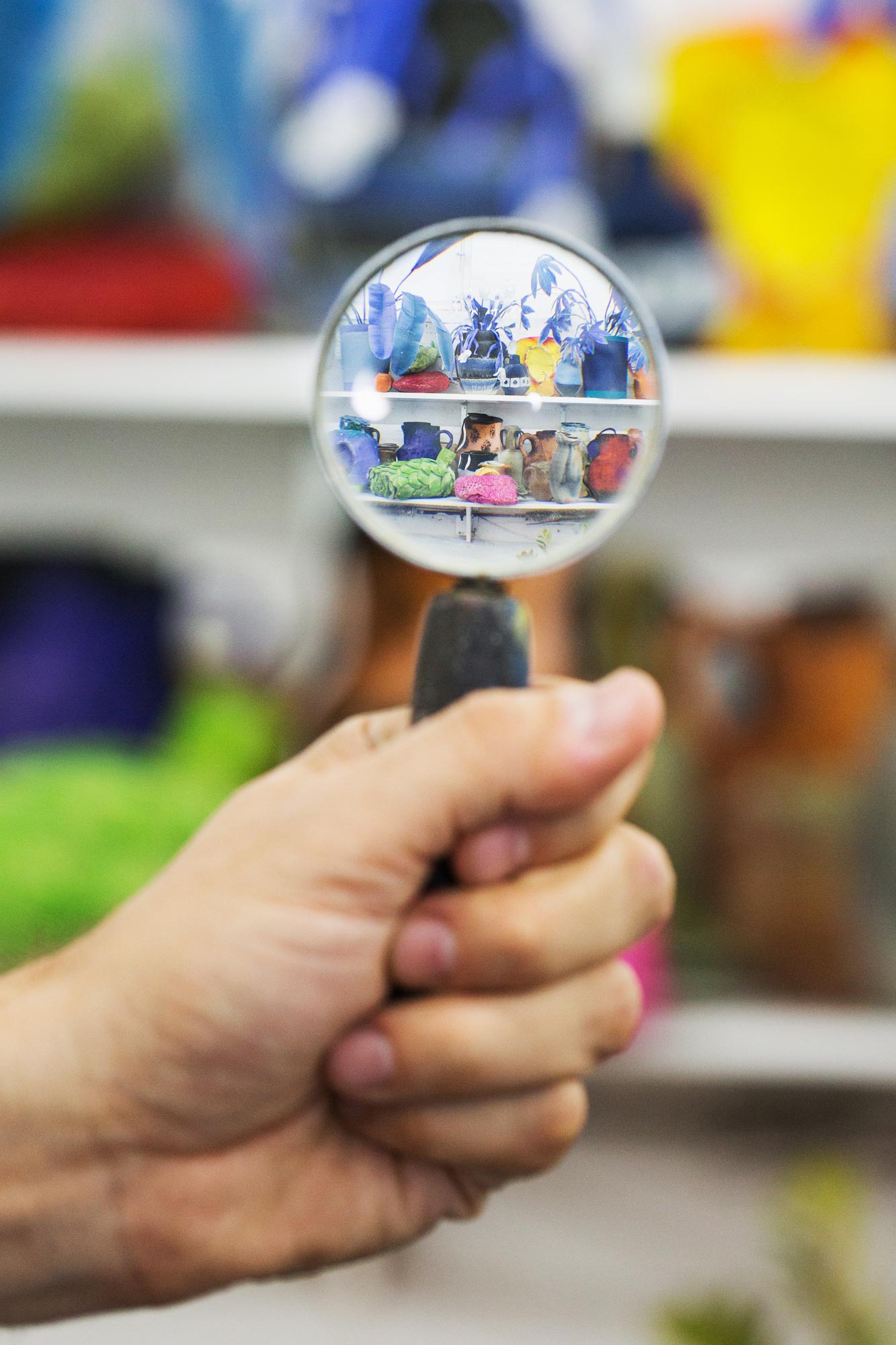 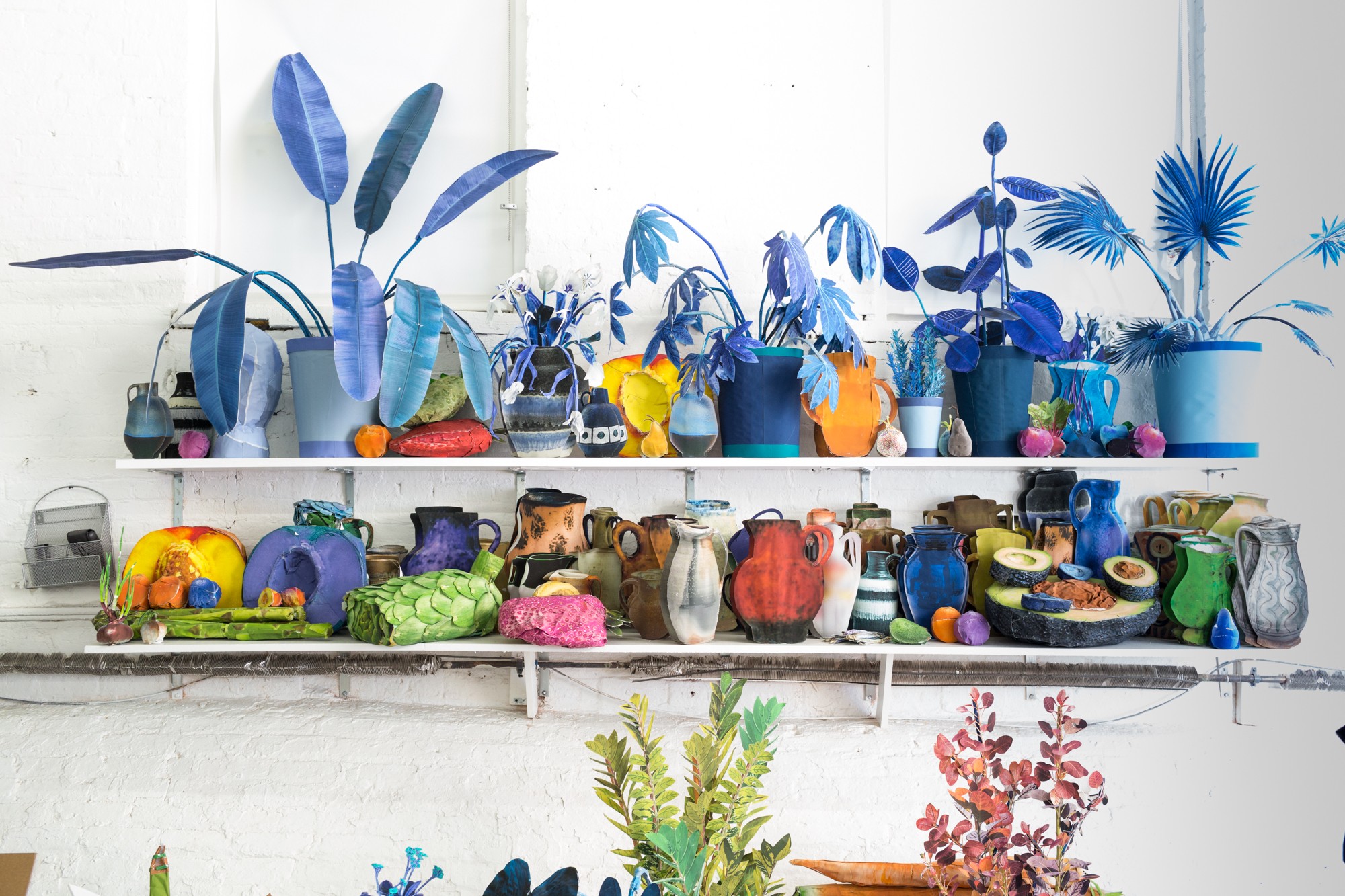 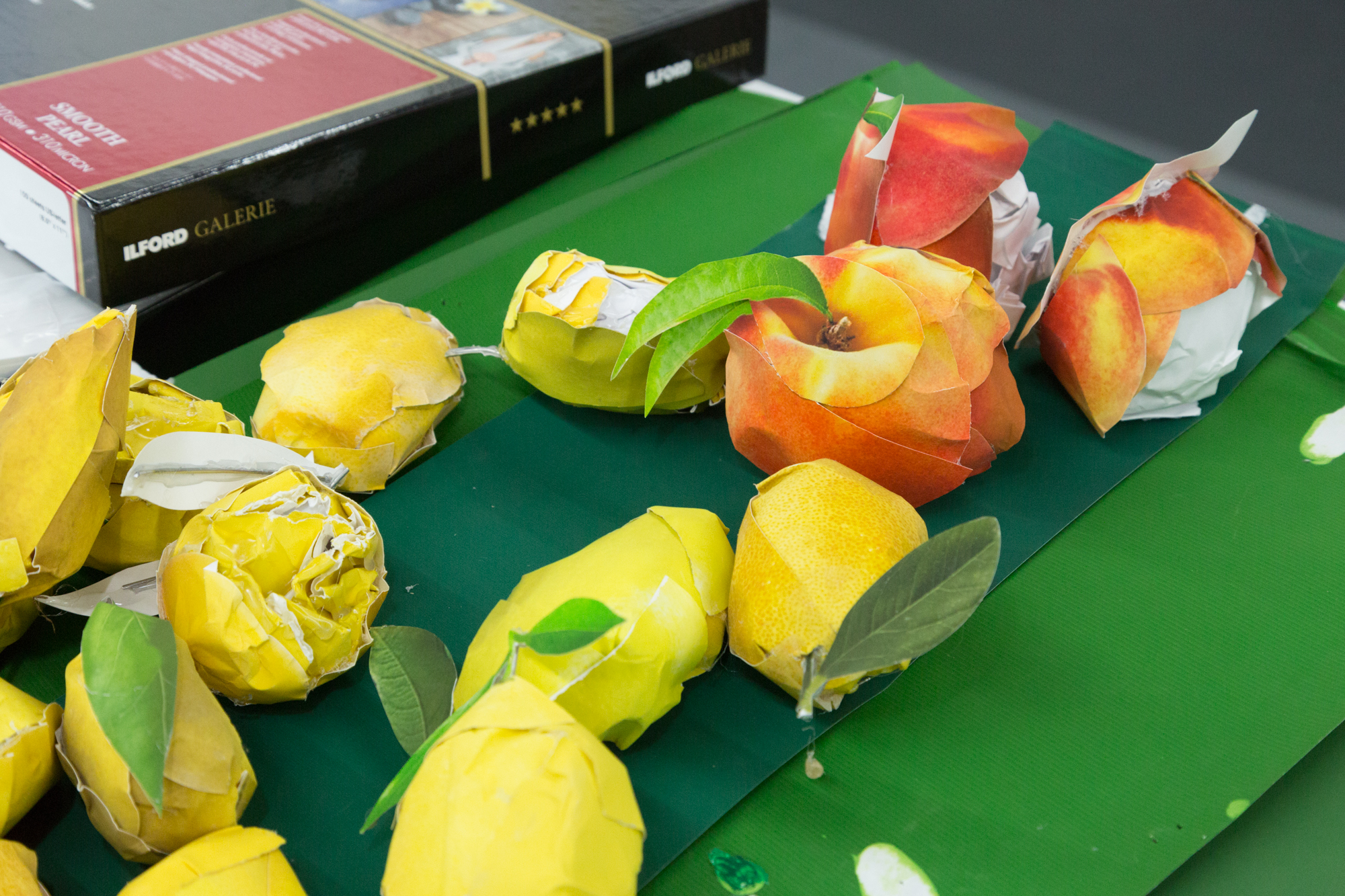 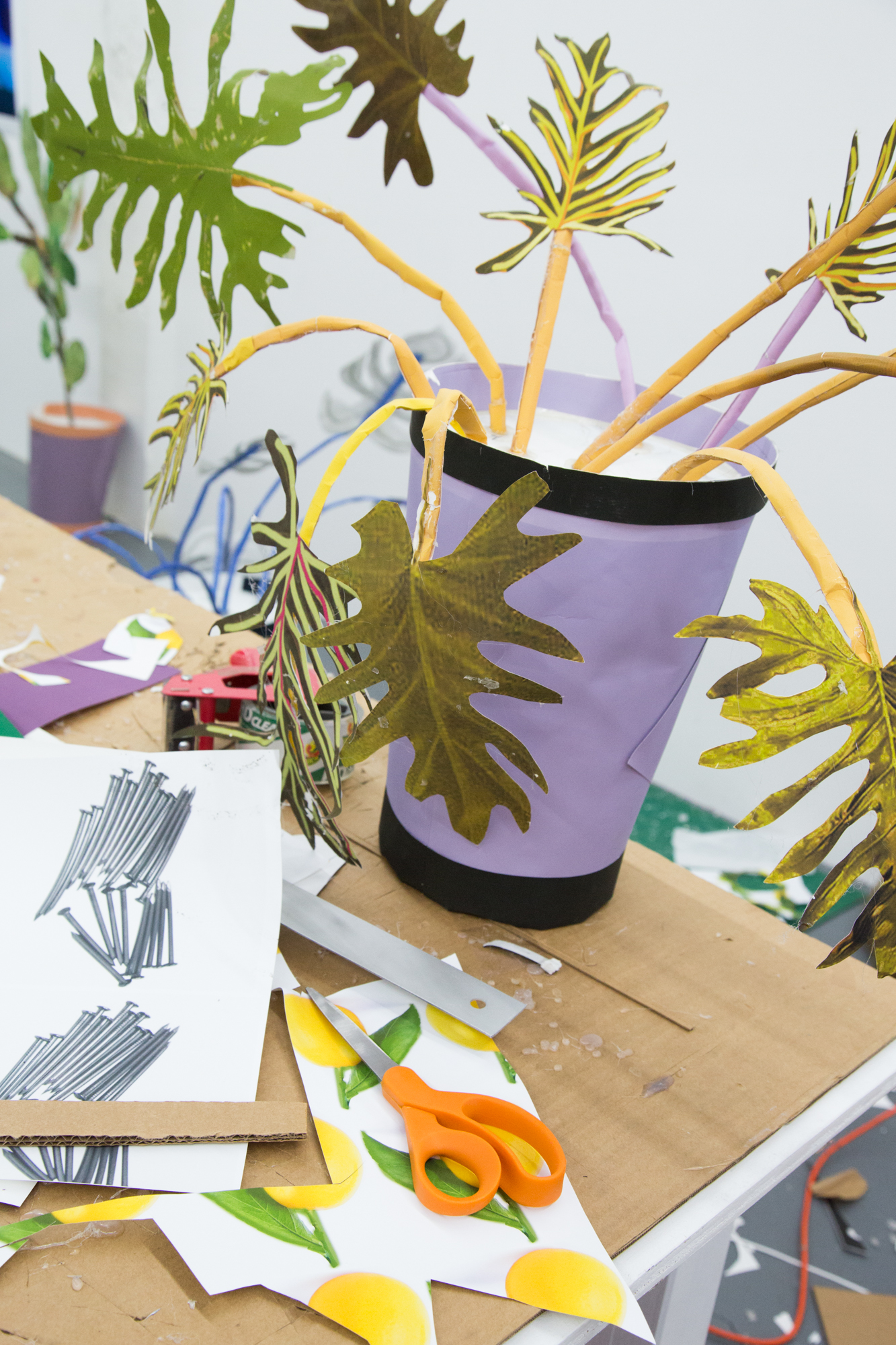 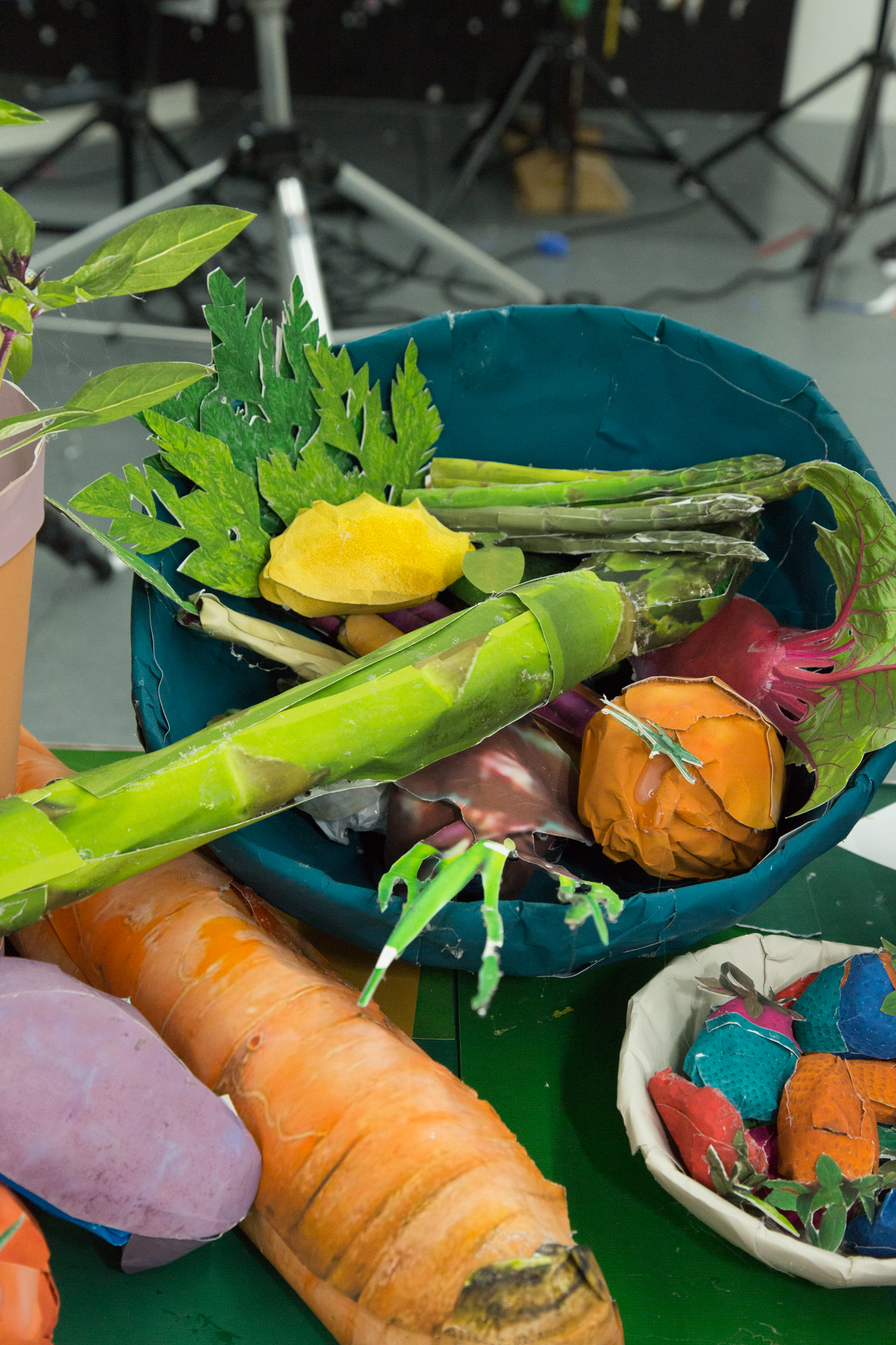 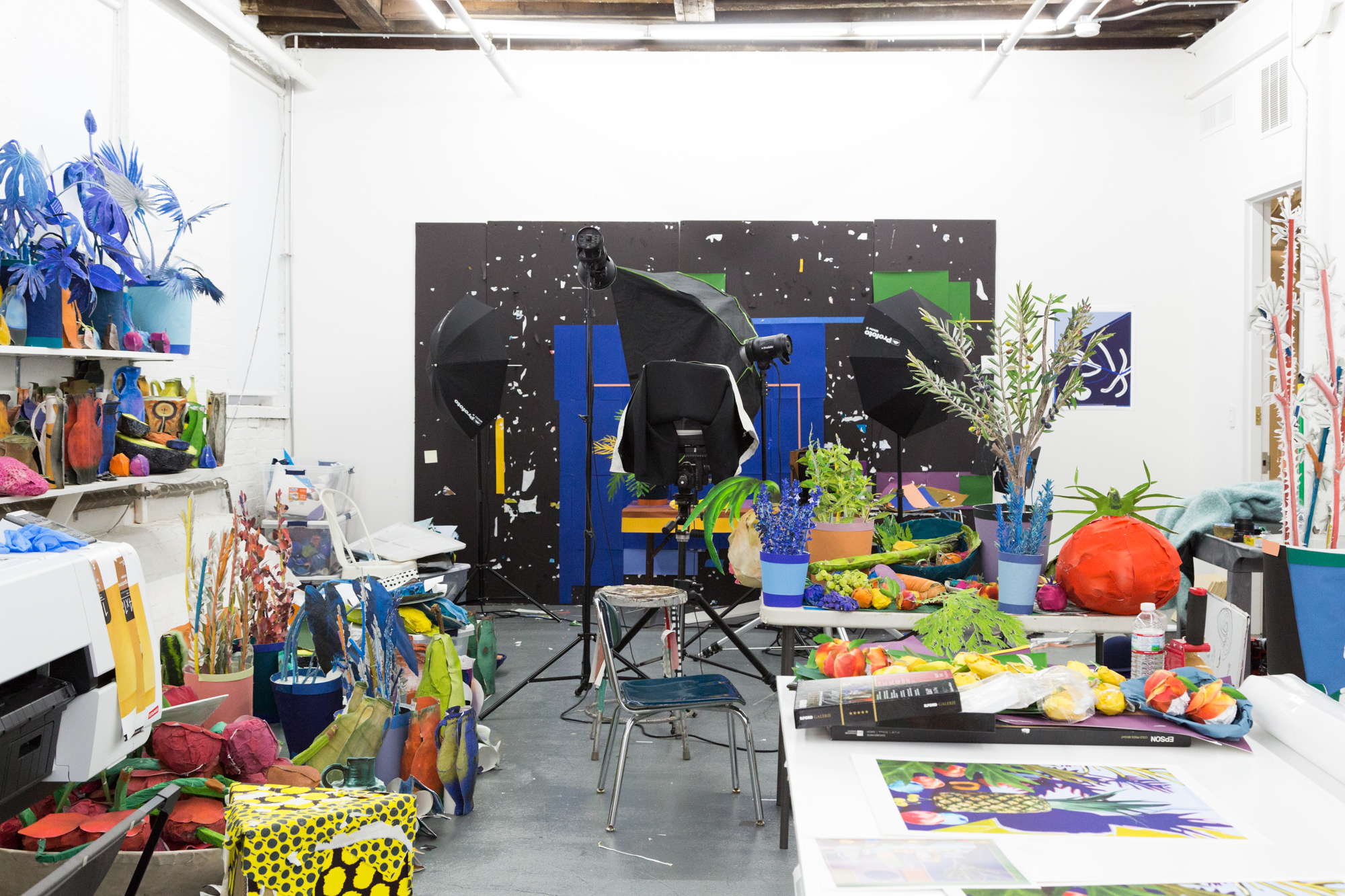 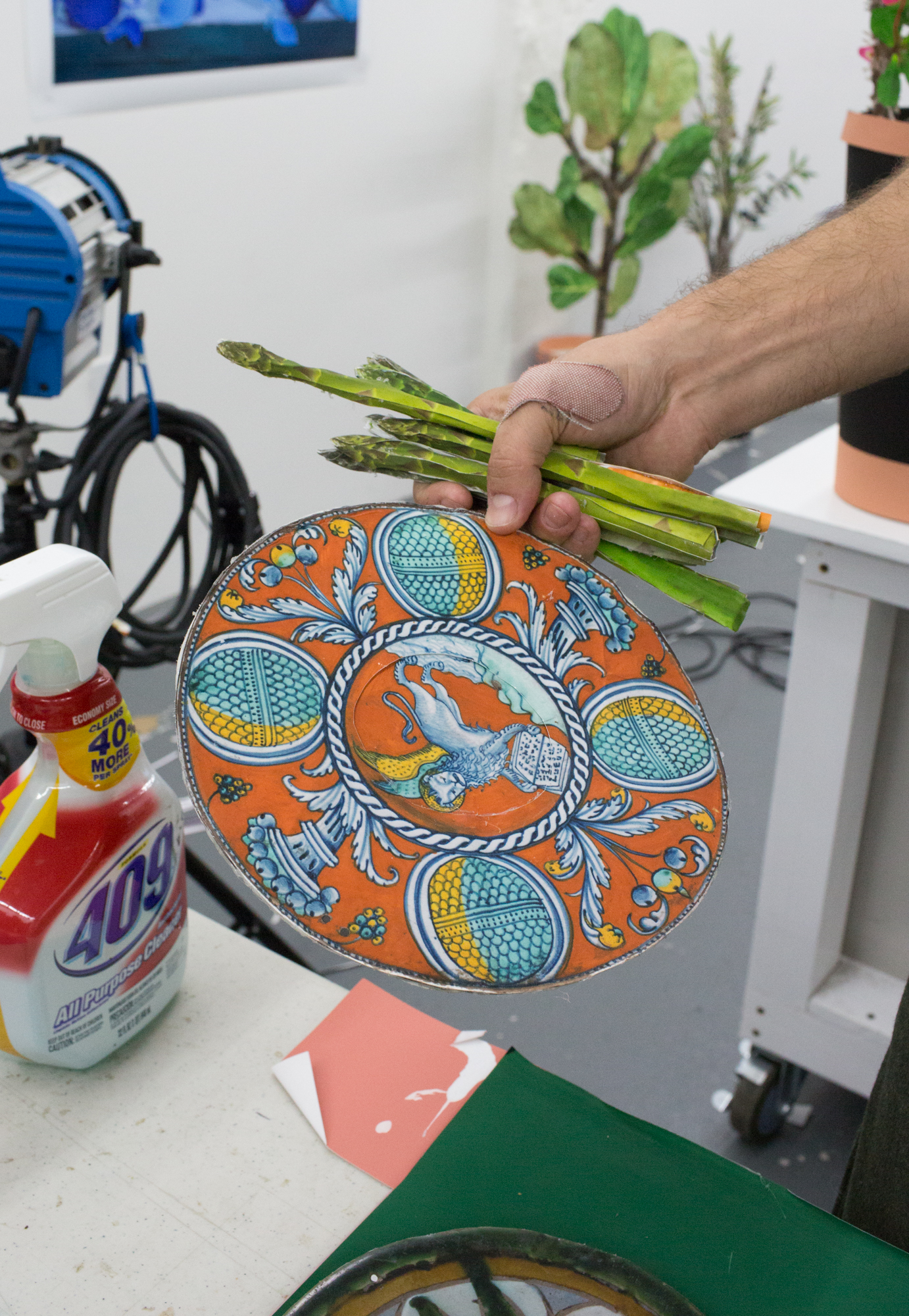 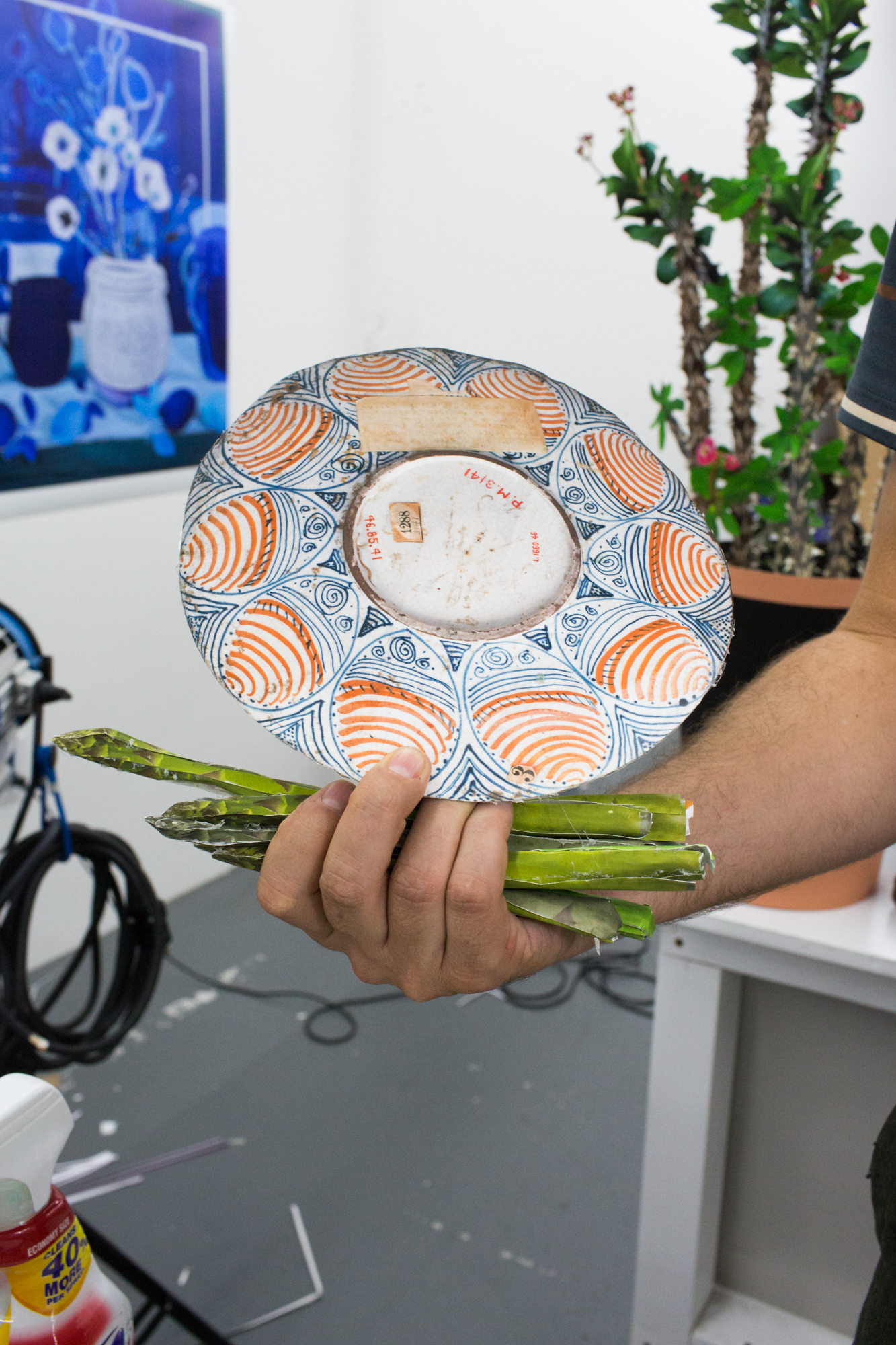 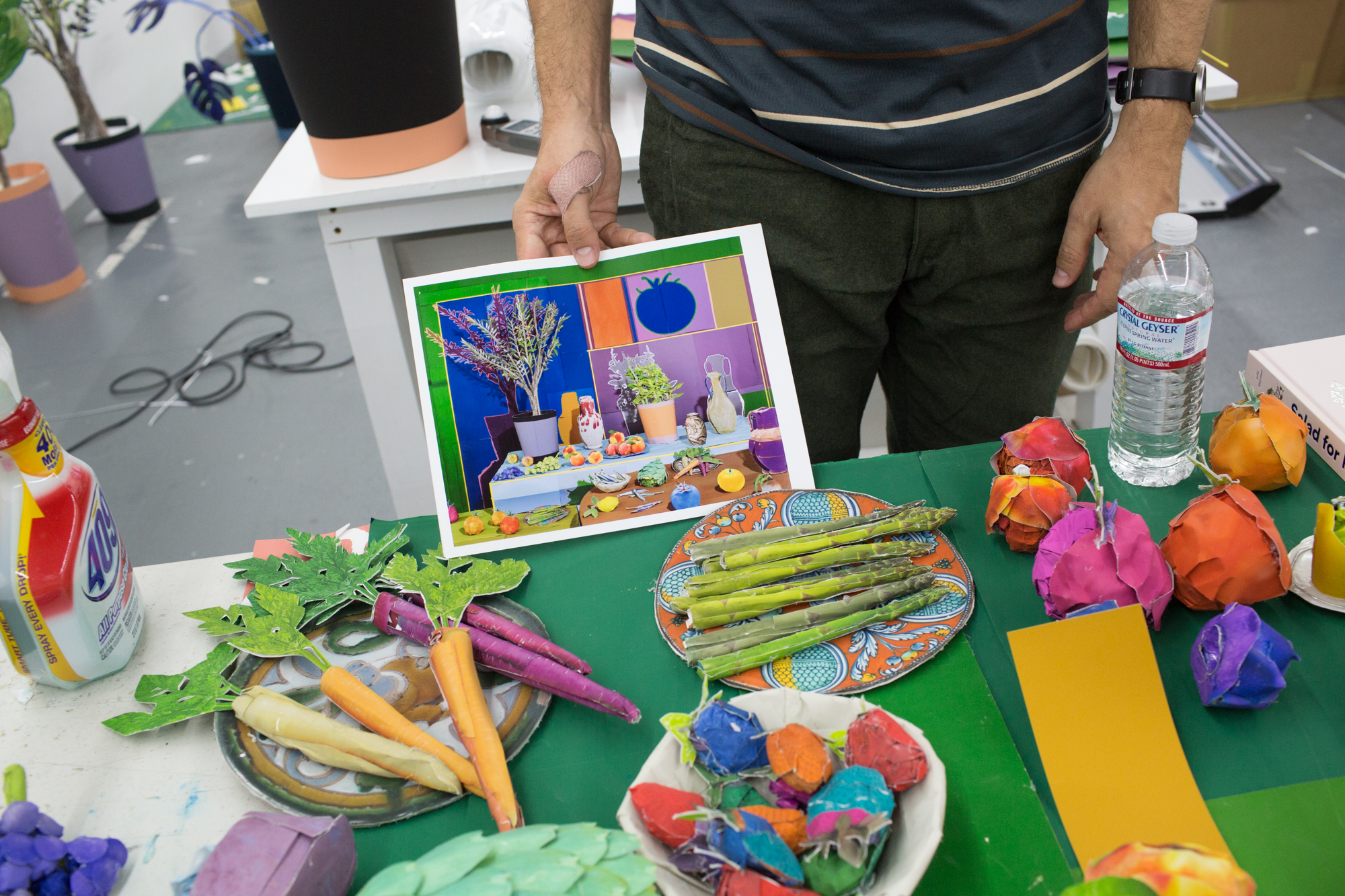 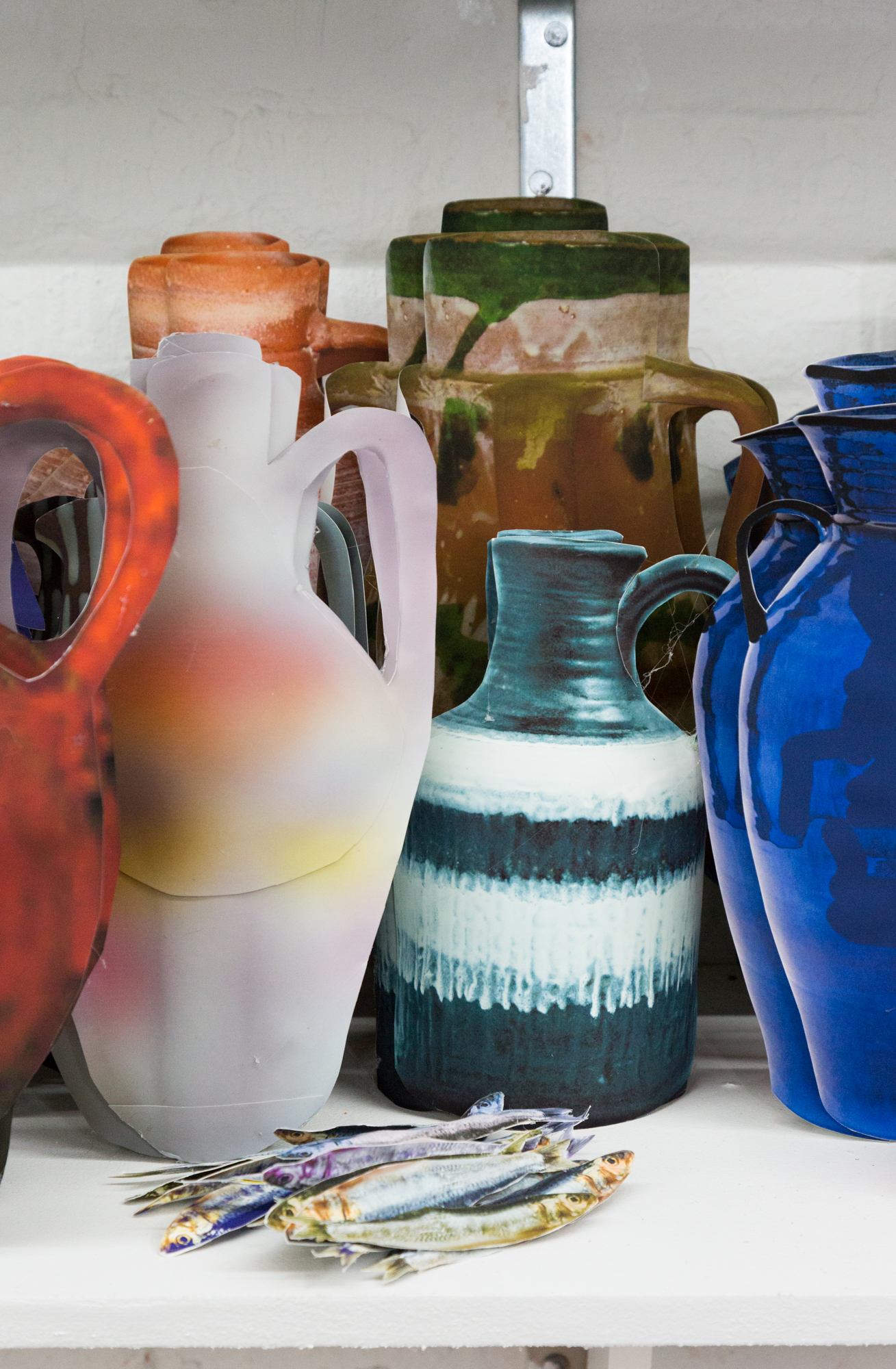 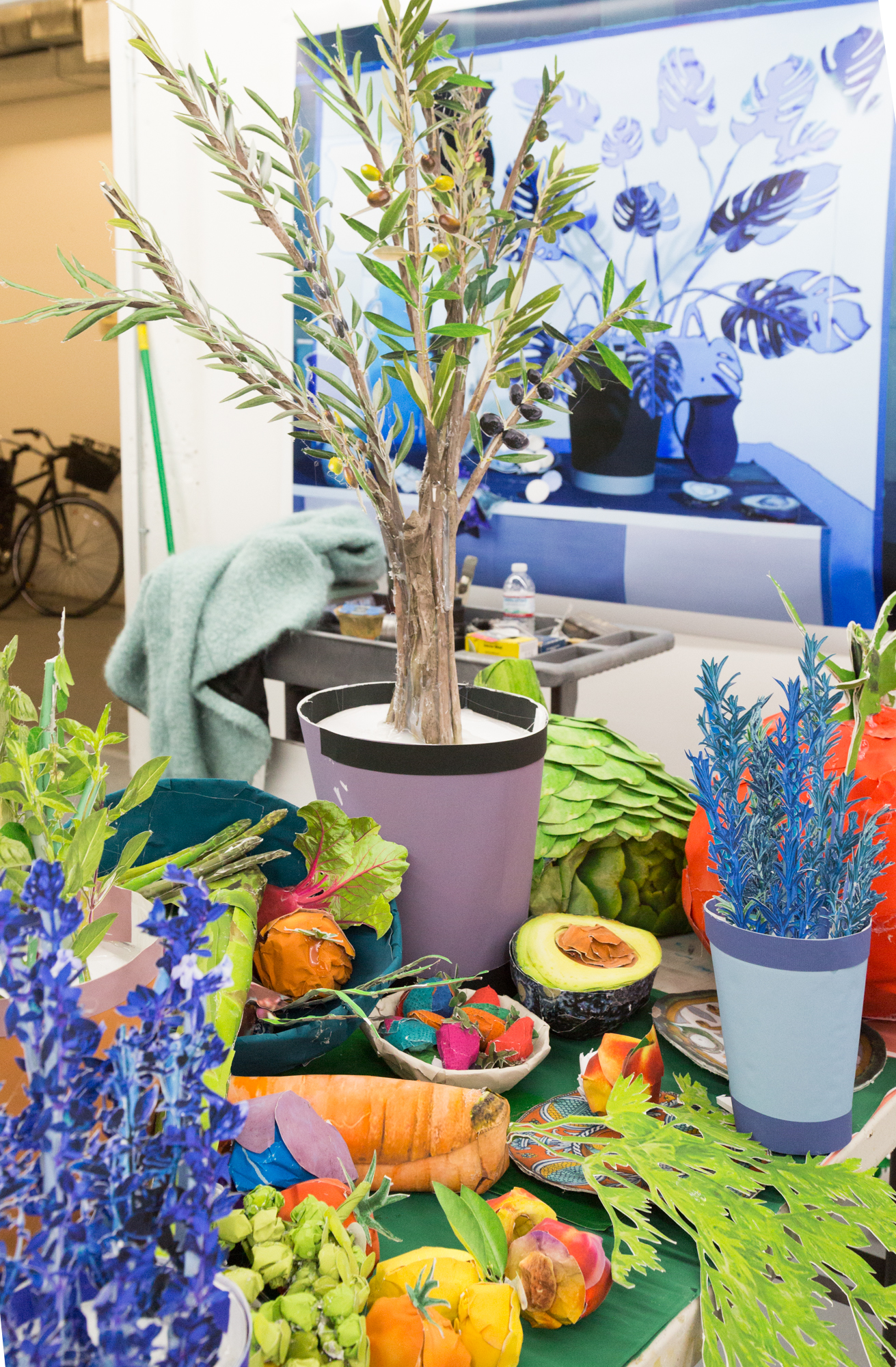 Sorry! No recipe for this salad, just raw inspiration. Unless you want to get out your scissors and glue.

Sorry! No recipe for this salad, just raw inspiration. Unless you want to get out your scissors and glue.

Arriving at artist Daniel Gordon’s South Slope Brooklyn studio, it dawns on me: neither of us really know what exactly I have come here to do. The pretense of my visit was to “make a paper salad” using Gordon’s signature collaged fruit and veggies sculptures, but it is immediately evident that neither of us knows what that really means. Regardless of our murky objectives, I have longtime been a fan of Gordon’s work– large format photographic still lives, composed with a trippy array of trompe l’oeil produce and everyday objects. As I banter back and forth with Daniel and his charming wife, artist Ruby Sky Stiler, Daniel plays the good sport, graciously adding highly inedible “ingredients” such as a gigantic asparagus spear, onions, and beets to a large purple painted paper bowl of his own creation. Ruby’s studio is just next door, and the boiler room serves as their own project space, an appointment only gallery called Downstairs where the couple hosts parties and exhibit work by artist friends. Once again, salad has served as the thinly veiled entrée into the private world of an artist I admire.

Gordon has been making digitally printed fruit and veggie sculptures as props for his large format photographs since before the dawn of Google image search. Before image search, he parsed manually through books and magazines, collecting and photocopying images of produce, house plants and everyday objects, cutting them out and collaging them onto roughly hewn three-dimensional paper forms. The resulting sculptures feel as if they were plucked from a psychedelic Cubist still life — the color on a potato might be shifted to an impossible lavender, or a strawberry made electric blue, its shapes and shadows refracted. Even with the aid of modern technology, the hunt for the image is still part of the fun for Gordon (it’s no surprise I would get along so well with a guy who spends his days pouring over images of vegetables). He shows me a colorful Etruscan plate, printed t0-scale on both sides. He recently discovered The Metropolitan Museum’s open source catalog of objects, a two-dimensional archive of precious objects that might as well have been created expressly for his use.

The studio, while very serious with its large format camera and strobe lights, is nonetheless any child’s dream, collage in progress on every surface, scraps of paper strewn about the floor, and oversized strawberries just begging to be handled (Stiler and Gordon are in fact hosting their son’s 5th birthday party in the studio this year, complete with a Brooklyn-based children’s’ band). Once these elements are placed in front of Gordon’s lens, the handmade tableau is precisely layered and structured, departing from the studio-as-tutti-frutti-fruit-salad effect you get upon entering the space. The Willy Wonka chaos of the studio is distilled into a single work of art in one decisive moment.

To see more of Daniel’s newest work, check out his current show at One Star Press in Paris, France.