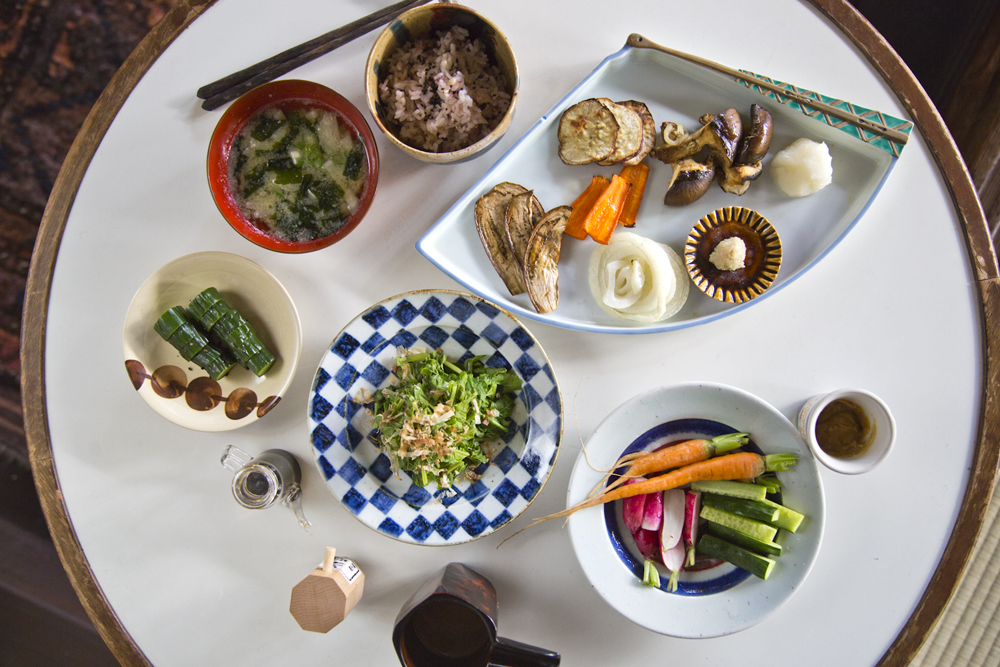 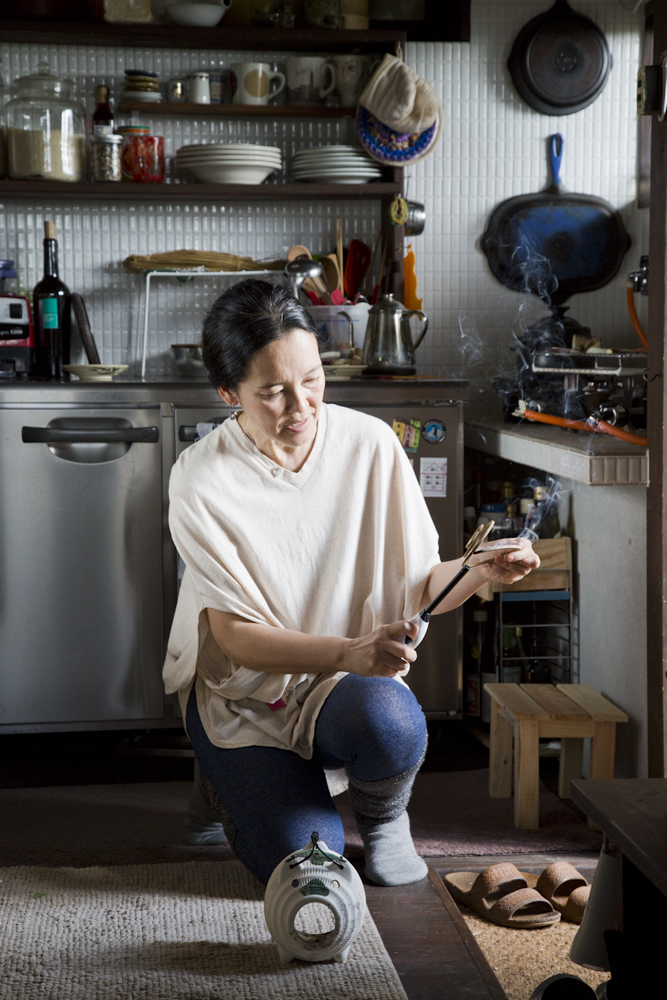 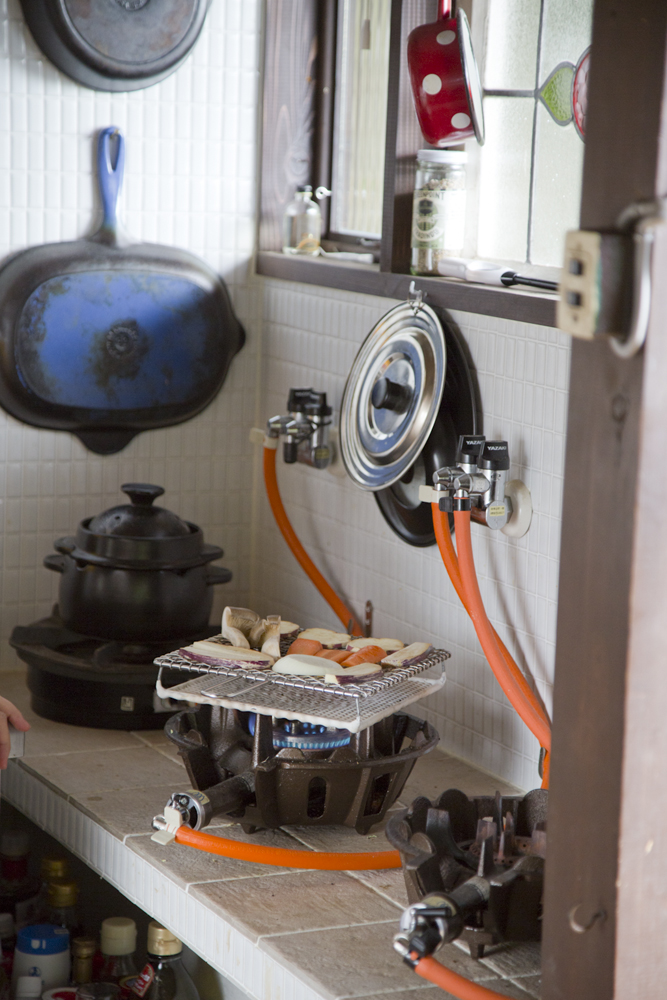 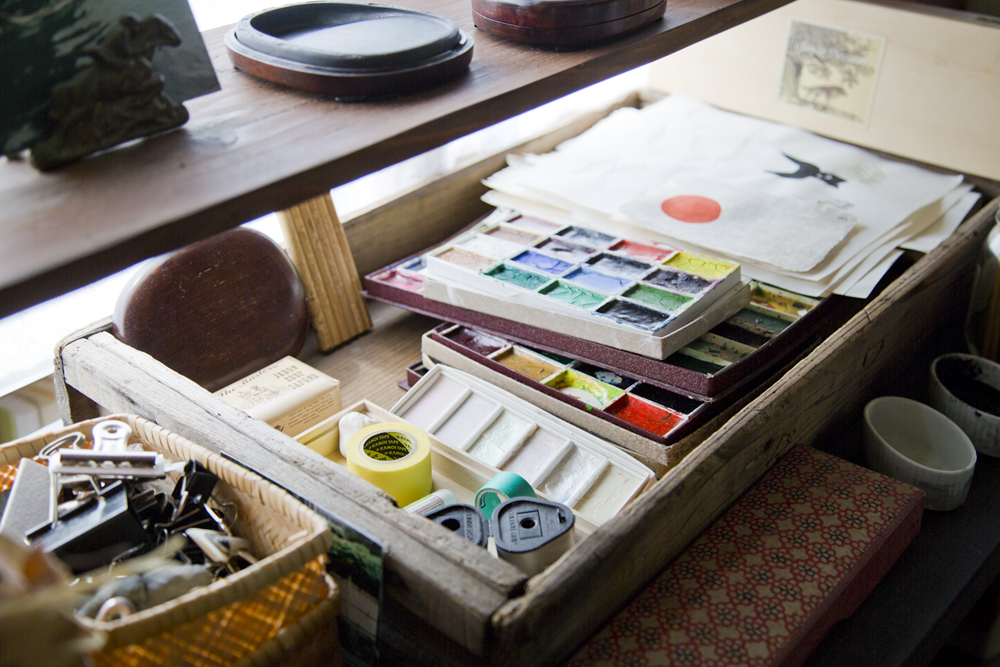 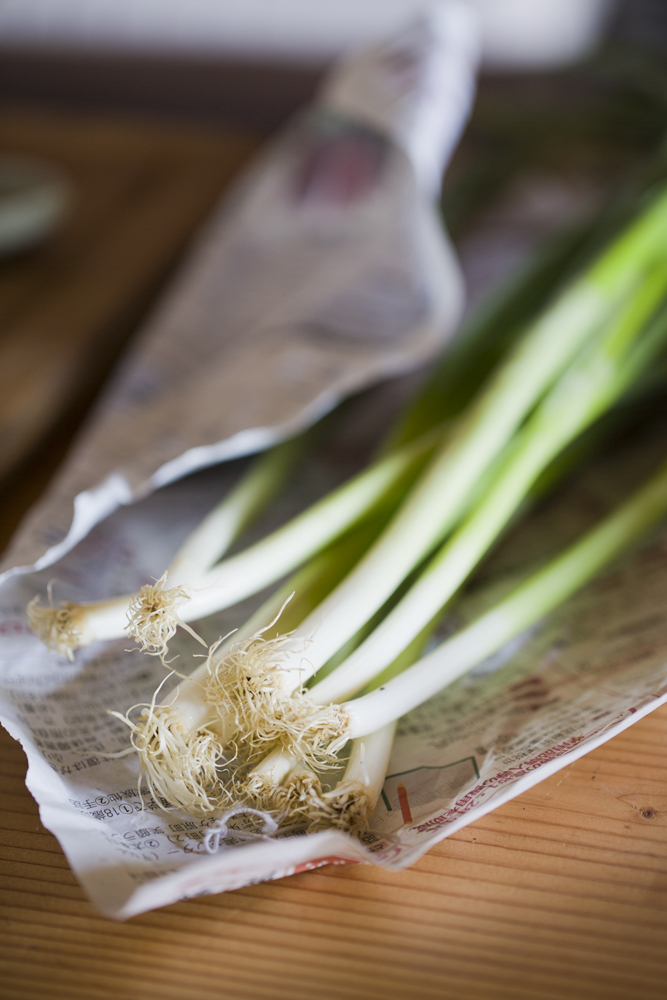 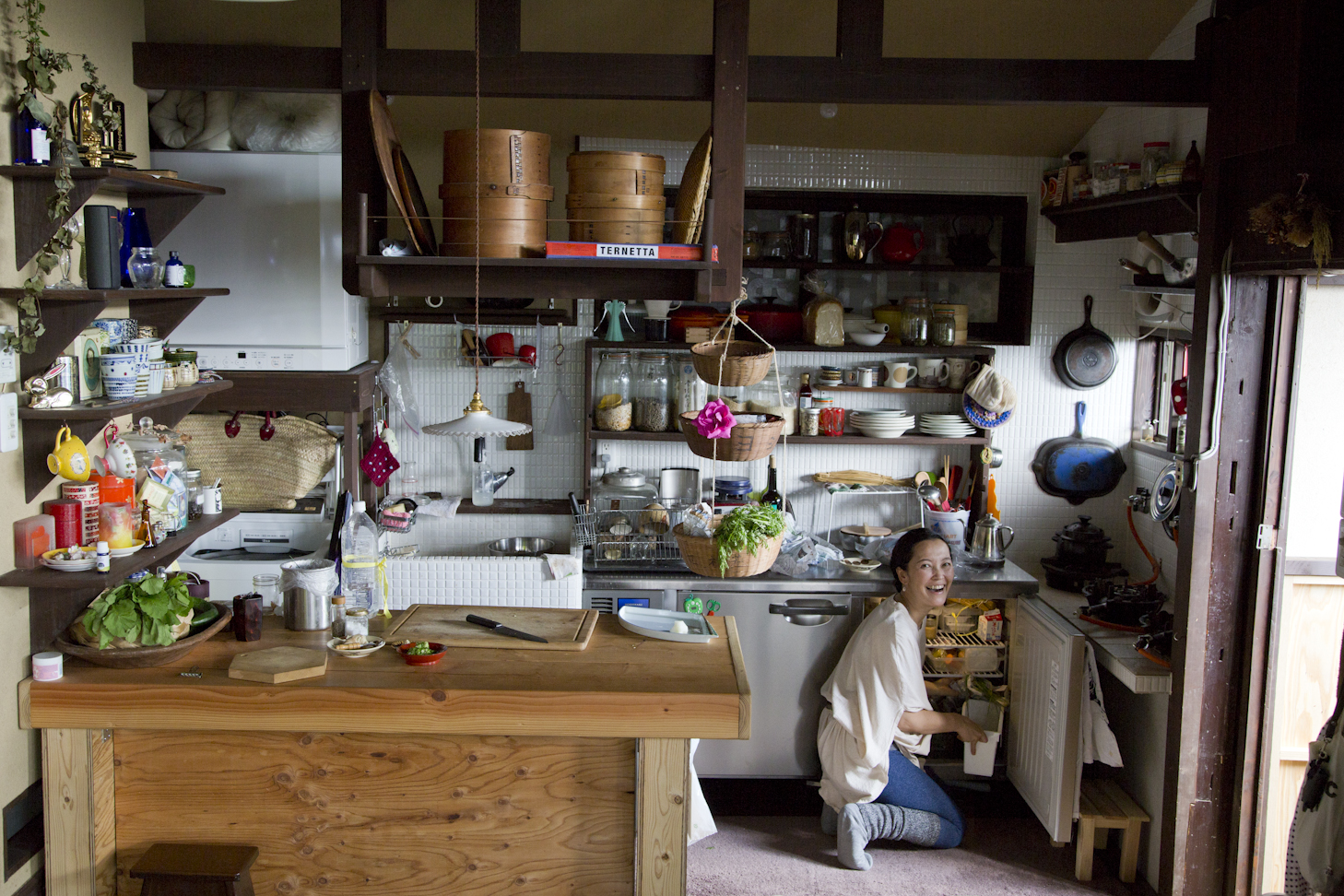 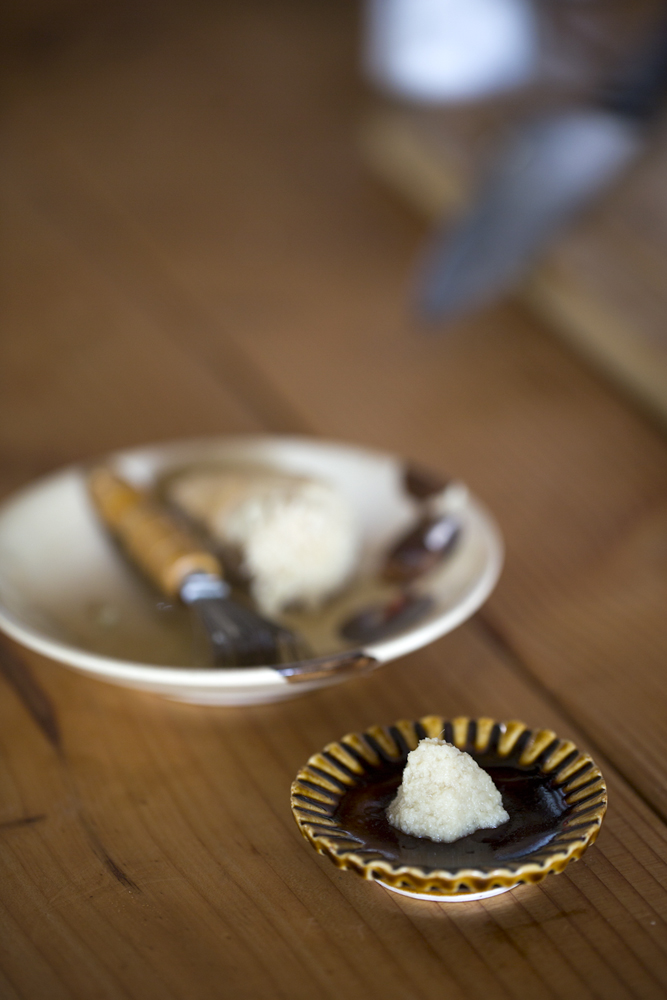 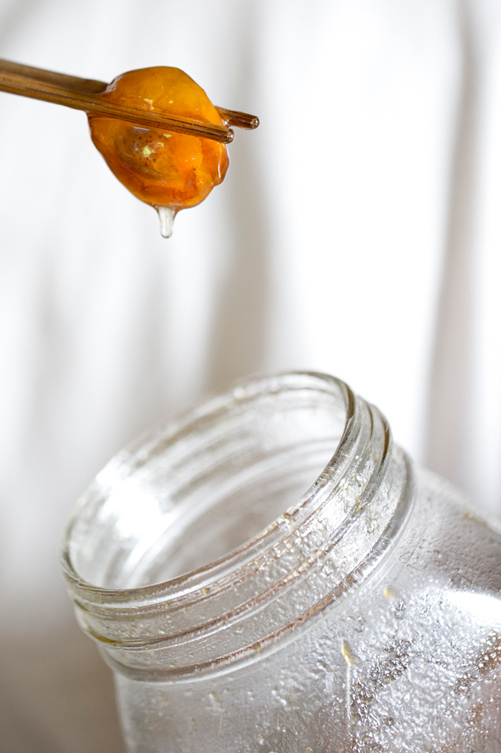 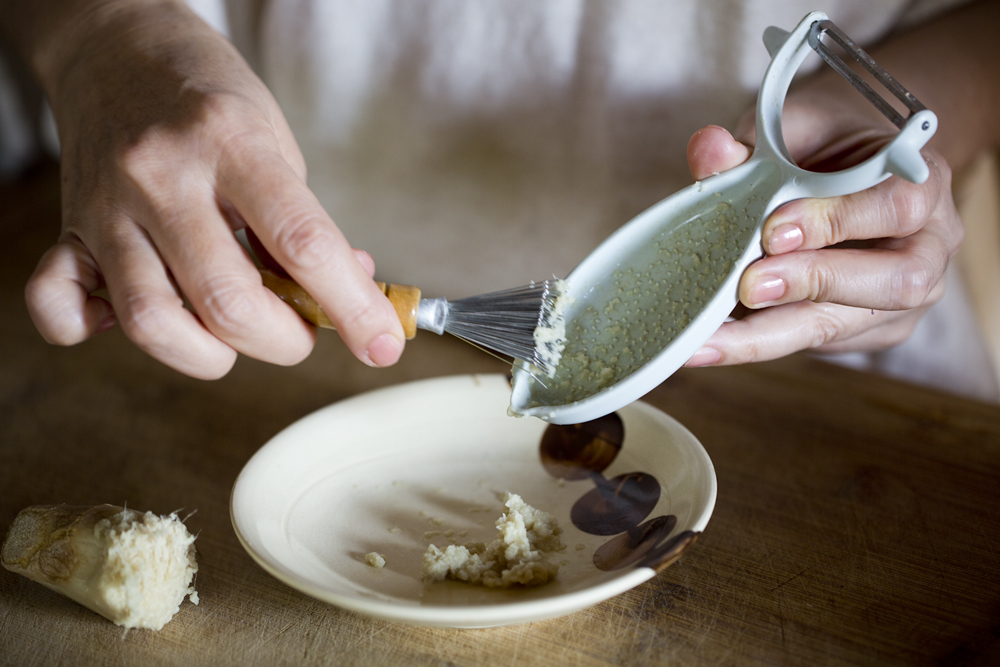 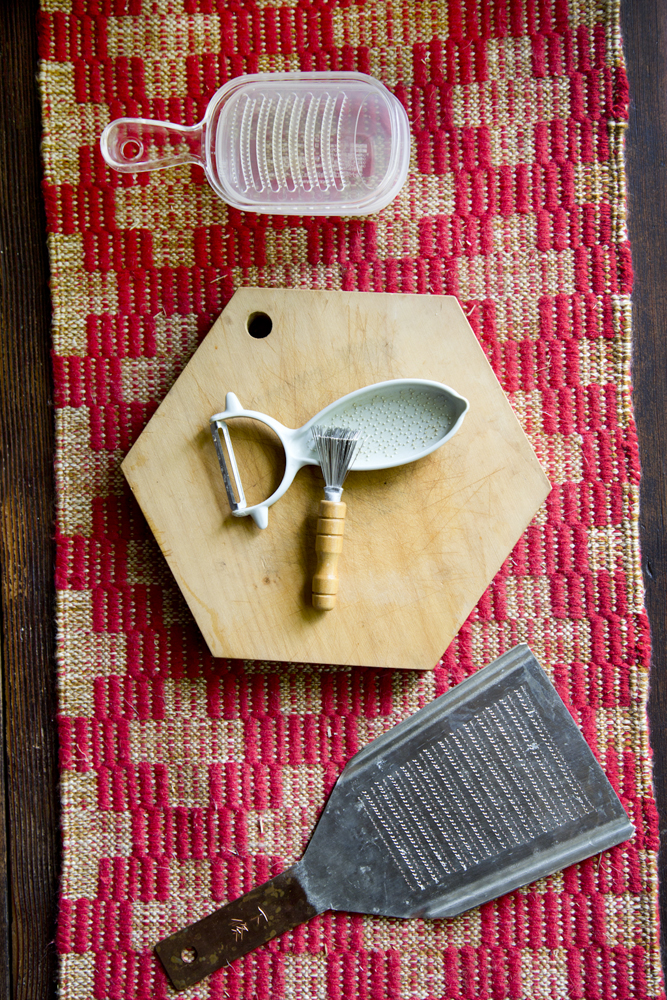 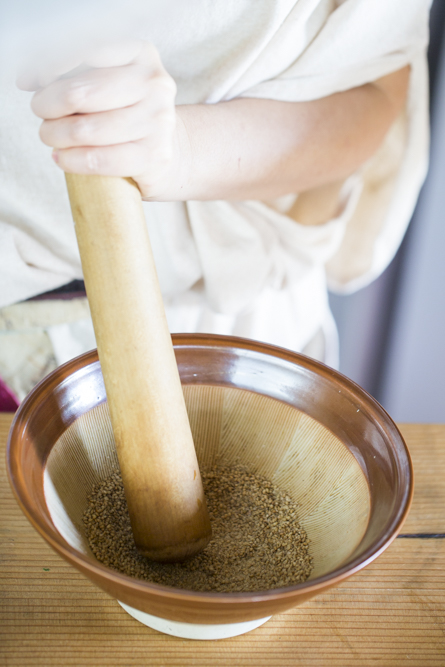 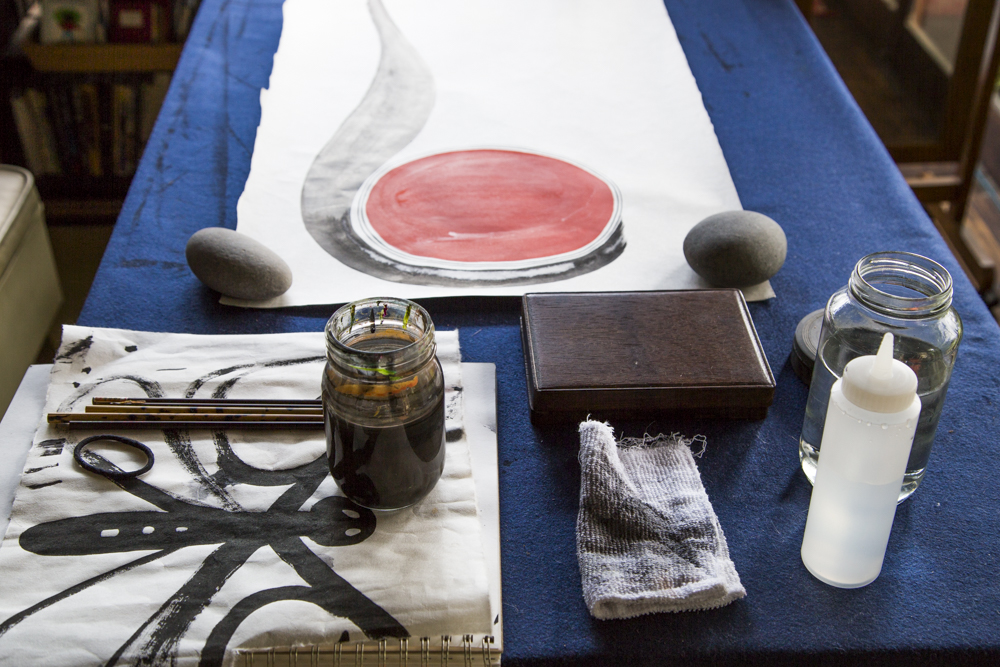 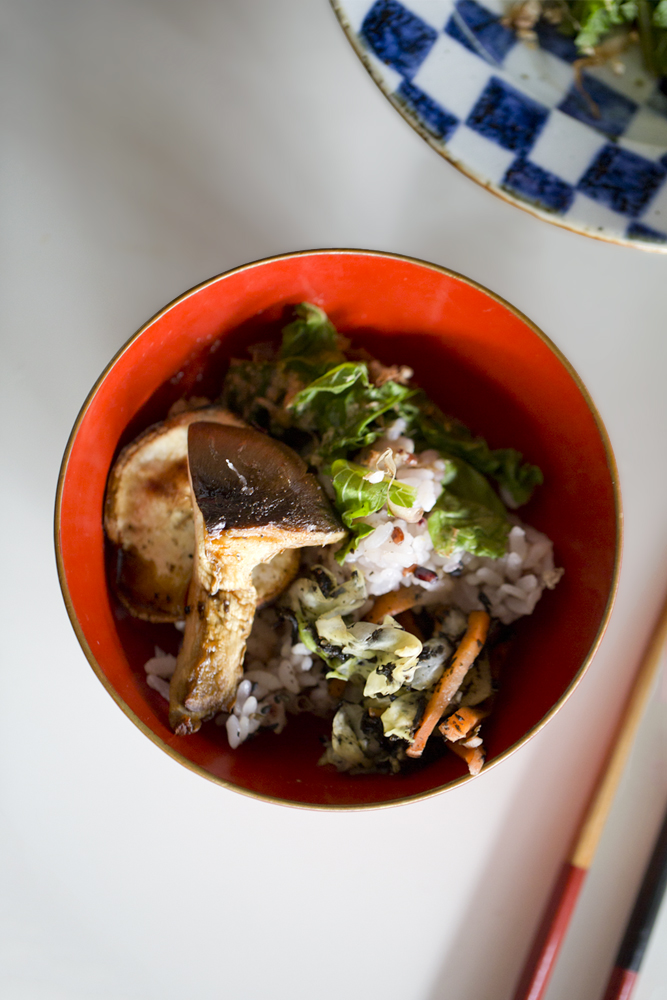 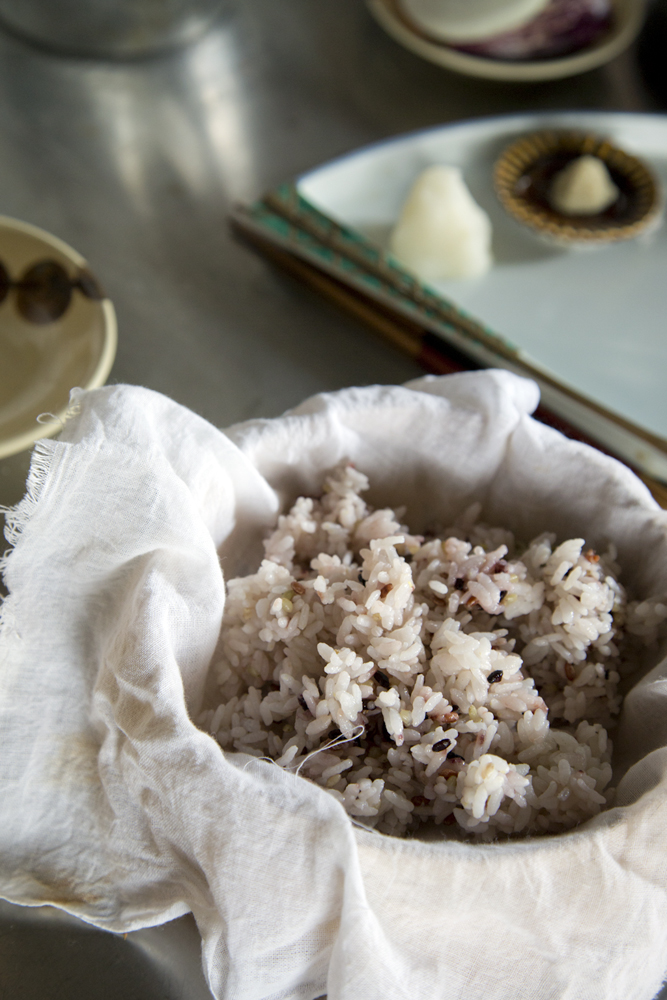 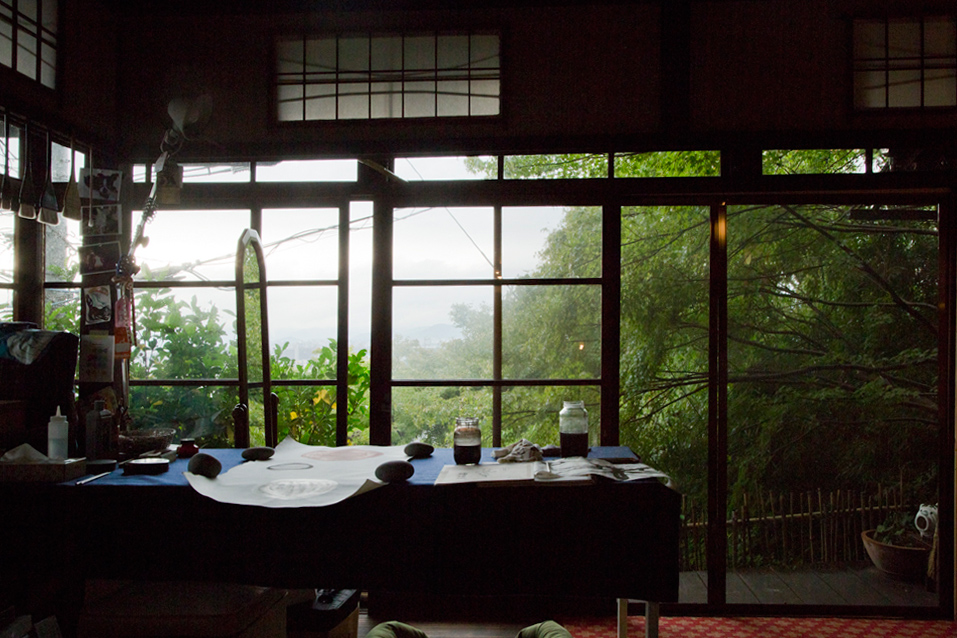 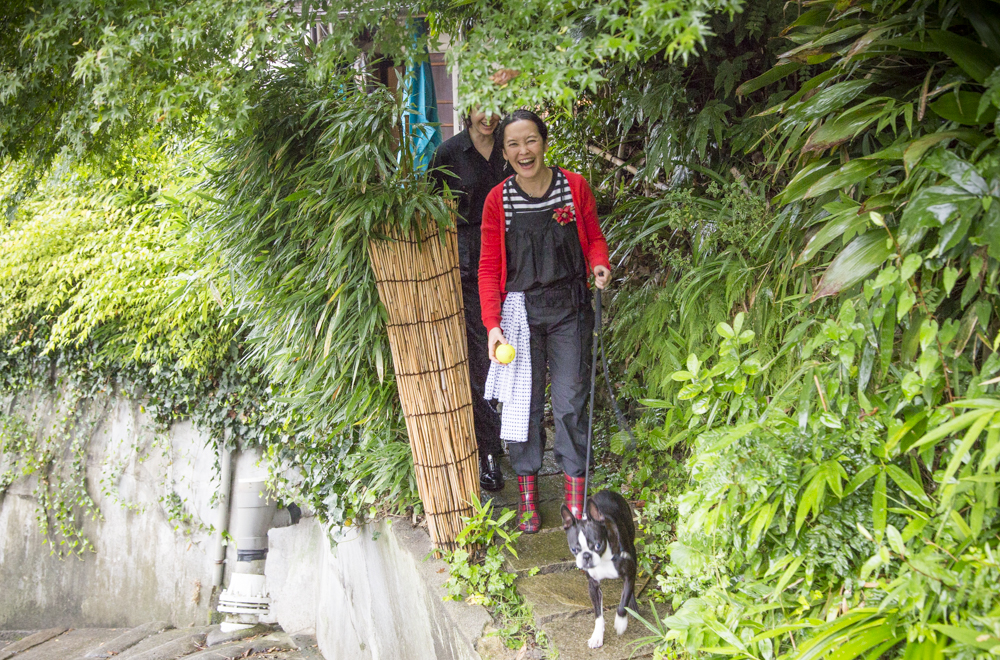 Grind the sesame seeds either by hand or

Yuri used a common Japanese kitchen tool called a suribachi to grind her sesame seeds. This is a ceramic bowl with an unglazed interior and a rough, grooved texture. This is better than a western mortar pestle when it comes to grinding sesame seeds and spices. This is a great, cheap kitchen tool, but if you don’t have one, you can use a spice grinder or, better yet, buy surigoma, ground sesame, at any Japanese supermarket or Asian grocer. You can use any seasonal veg for dipping in this sauce. If using cauliflower or broccoli, I suggest a quick dunk in boiling water to blanch them first.

Yuri also made me a delicious fermented plum soda. She says, “You basically mix 1 part fresh picked plum to 1 part granulated sugar (700g fresh picked plum : 770g granulated sugar). Add to a sterilized glass container, and mix it twice a day with your clean hand for at least 1 week, until you start to see enzyme bubbles.” She pointed me to this website for more info…

Peel your carrots, leaving the tops on. Scrub radishes, leave some of the green top on those as well. Slice cucumber into quarters and serve all the vegetables on a platter alongside dip.

Peel your carrots, leaving the tops on. Scrub radishes, leave some of the green top on those as well. Slice cucumber into quarters and serve all the vegetables on a platter alongside dip.

When mutual friend artist Adam Fuss, introduced me to Kyoto based artist Yuri Shimojo, he warned me that she might be burnt-out on visitors.  He himself had visited in the last year, and Yuri has taken him on countless adventures in the hills of Nara, to see master potters, to eat mind-blowing food and walk in peaceful temples. So, taking heed, I made contact with Yuri, asking some advice and hoping to meet for a meal, but not expecting much more than that.

In our first exchange I asked Yuri if there was anything in particular she suggested we check out, to which she replied, “sake is religion, mushrooms will be the season, Teishoku is plate lunch, there is sushi like gemstones and crazy Izakaya serving Japanese Soul Food … etc etc.” Clearly Yuri knew the Kyoto I was dying to access, but it wasn’t until we had consumed many bottles of sake at her friends’ restaurant, Yoshidaya, that I knew Yuri wouldn’t let us flounder. In fact, she would make it her personal mission to entertain us and introduce us to chefs, farmers, artists and book dealers. Why? Well, as much as Yuri knows and loves Japan, she will always consider herself a New Yorker. She is one of us, but her life just got an upgrade.

Aside from being a fabulous hostess, Yuri is a seasoned artist, writer and illustrator. She was a seminal member of the NY art collective, The Barnstormers, and published her own memoir at the age of 29 (cover image from the book is in the slideshow above, and pictures Yuri as a young girl, wearing a kimono). Yuri even hosted a popular 90s tv show in Tokyo, one that she can only compare to Wayne’s World. These days, Yuri finds herself perched in her home/studio on a mountain in the outskirts of Kyoto, where she paints everyday, walks her dog Rudy on a sacred path, and recently had a solo exhibition at a nearby shrine.

Yuri Shimojo In Her Own Words

Julia Sherman: Tell me about your upbringing.

Yuri Shimojo: My childhood in Tokyo was a very unconventional. My family descended from Samurai, so as a result, I practiced the Japanese traditional arts since I was at three years old: tea ceremony, flower arrangement, Kabuki and Noh theatrical dance. This was unique for a modern Japanese kid. At the same time, my late “flamboyant” parents also wanted me to travel abroad and access a whole range of social events, so the combination of all of these colorful experiences have influenced me as an artist.

JS: Wait, your ancestors were samurai!?! What exactly does that mean?

JS: Can you make sense of how you spent your formative years studying the traditional Japanese arts, but ended up in a street art collective?

YS: Not really. (laughs) But, my parents were both rebels; disobedience must be in my blood. My favorite quote is “Life is what happens while you are busy making other plans.” And this is absolutely true.

JS: Alright, how would you describe your career as a television personality? This is fascinating to me!

YS: In Japan it’s kind of easy to become some sort of pop icon if you are in the scene. I used to be “a party girl of Tokyo,” and was in a bunch of magazines etc. My TV show was on a satellite music channel all about subculture called “Bum TV.” We had a weekly live show chitchatting in the living room style. It was like Wayne’s World, but with turntables and DJs. We had famous or obscure guests from all over the world. It was a luxurious public playground before YouTube.

JS: What inspired you to write an autobiography when you were just 29?

YS: I was offered a book deal by an editor who had read some of my various essays in magazines. She encouraged to write a memoir of my unique upbringing. My entire family had died in the preceding years, and the process of writing that book taught me to dig deeper my inner self. I was shy at the beginning, since I wasn’t a “professional” writer, but the process was so raw and direct,  it inspired me to paint abstraction that came from a place deep within me, instead of illustrating somebody else’s story.

JS: How did you end up in Williamsburg in the 90s?

YS: In mid 90s I lived in Tokyo, but I was working on an animation project for a Japanese client with a NY team. On my flight from Tokyo to NY, I sat next to a young gentleman with funny hair. He asked me what I did and I said, “I paint.” He asked me what kind of painting I did and I said, “jellyfish.” (I was working on a children’s book about jellyfish at that time). He said, “I paint squid!” We went on a date and I moved to NY the next year to live with him…that was in Williamsburg. Williamsburg in mid 90s reminded me of my childhood neighborhood Kichijoji , a bohemian artist community about 30 minutes from central Tokyo.

JS: What is the story behind this amazing house? How did you find it, and what did you have to do to get it to the state it is in today?

YS: The house found me. I call this little house, “Chogyo-An,” which means, “Mountain Atelier of Birdfish.” It’s located on the old pilgrimage path of monks and esoteric practitioners. I thought I’d never live in Japan again but this house brought me back. I was going to just do some remodeling, but I ended up restoring the entire house. It took more than a year, and we are still working.

JS: You recently designed the devotional offerings for the temple. How was this project different for you than previous projects?

YS: What could be a greater honor than designing something represents hope through people’s prayers? It’s humbly ecstatic.

JS: And where did the design for the offering come from?

YS: It is based off of a mural I made at Picture Farm Gallery in Williamsburg in 2014. The image represents The Year of the Horse.

JS: And that is an ongoing project right?

YS: I’ve been painting mural of zodiac at Picture Farm Gallery in Southside of Williamsburg since 2013. I go back to re-paint it every year. I love knowing that my work is always there in my old neighborhood. It’s my passion and sentiment.

JS: When we first met, we talked about how you may be Japanese, and may have moved back to Japan, but you still identify as a New Yorker. What does that mean to you, now that you are back in your mother country?

YS: After I experienced my family’s death, the fairytale of my party life in Tokyo was over; I wanted to pursue reality. In NY in 80s, people were struggling but they were real. I missed diversity of community. So I left Tokyo and moved back to NY again. NY makes you tough but there is also some essential goodness about humanity in there too. Once you are a New Yorker, you are a New Yorker for the rest of your life, I think.