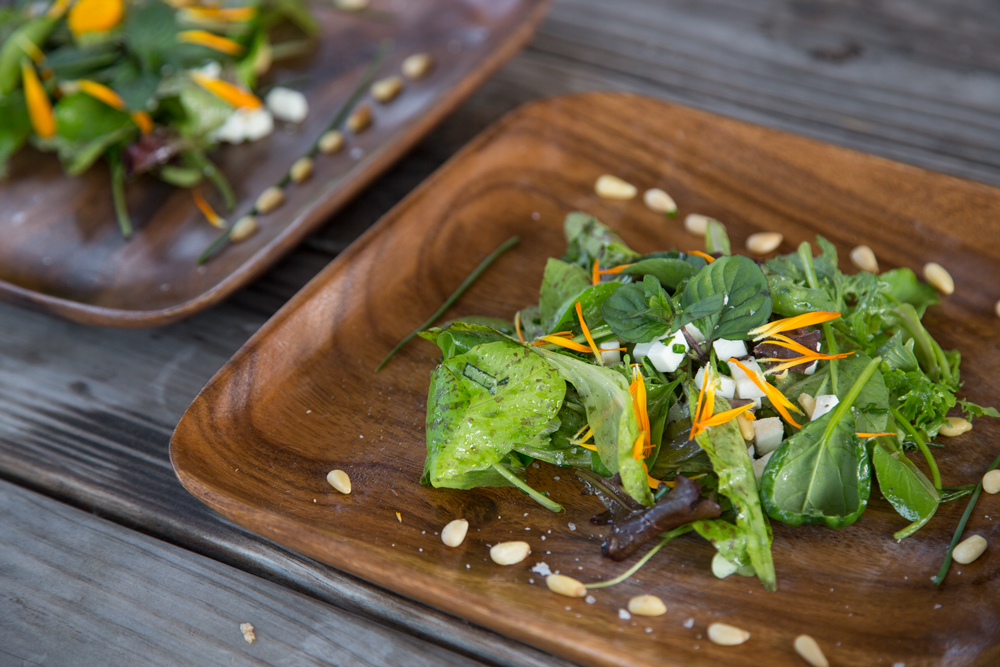 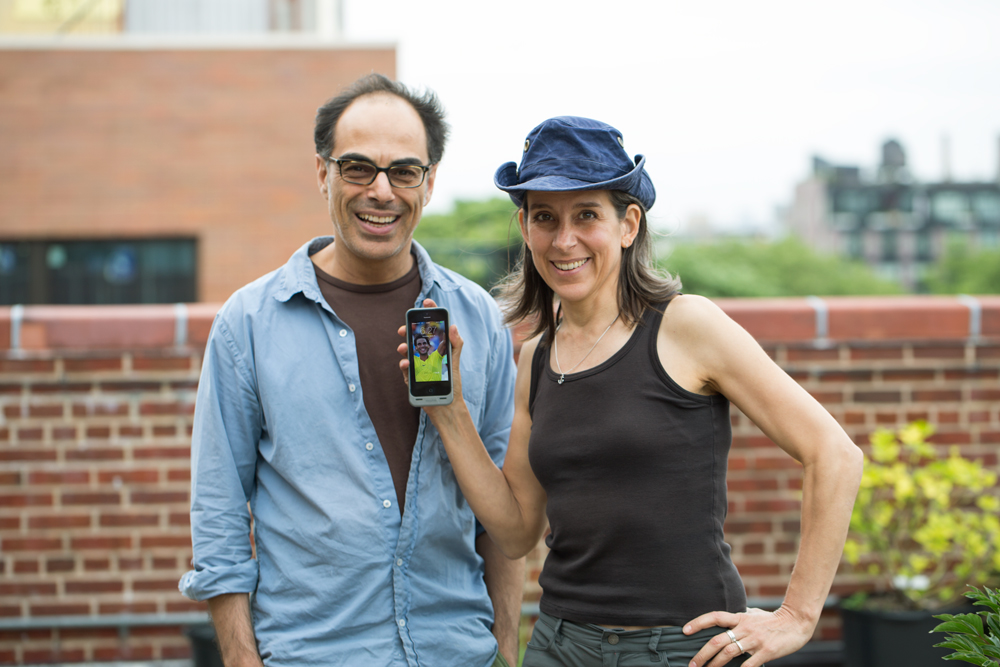 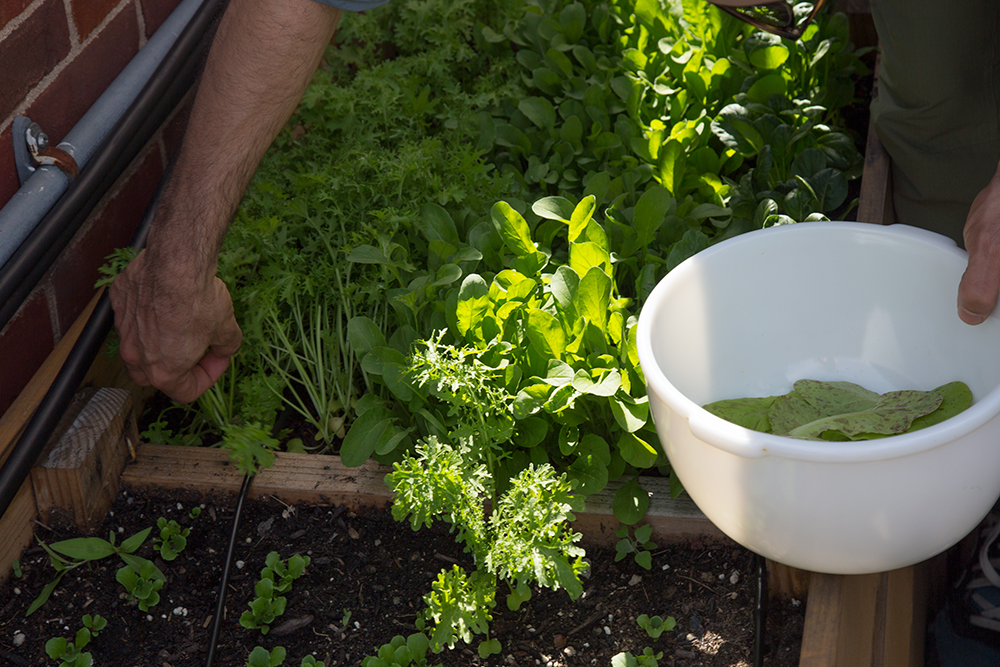 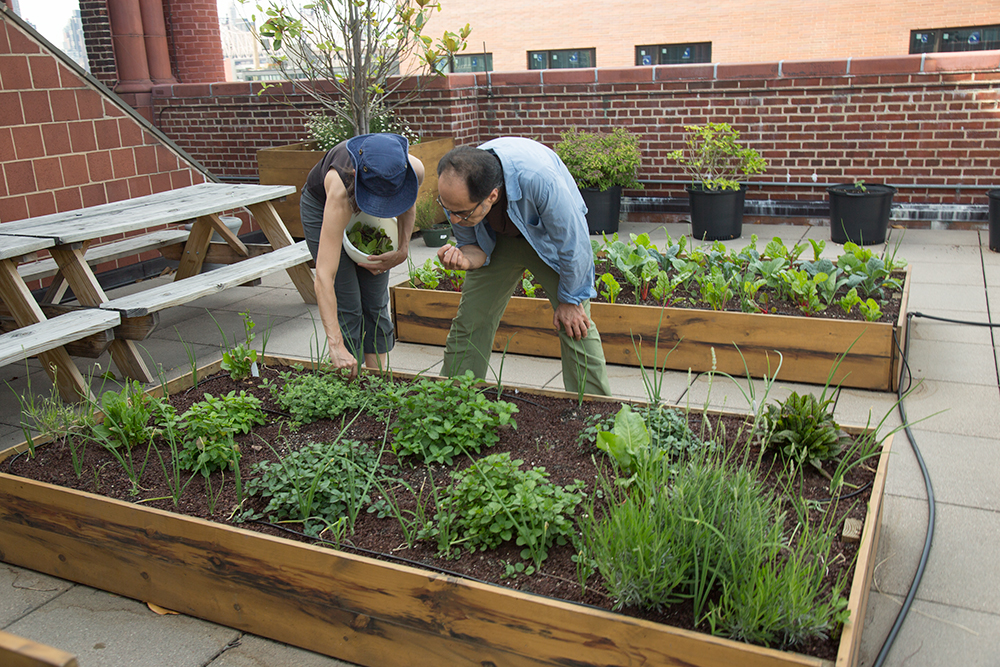 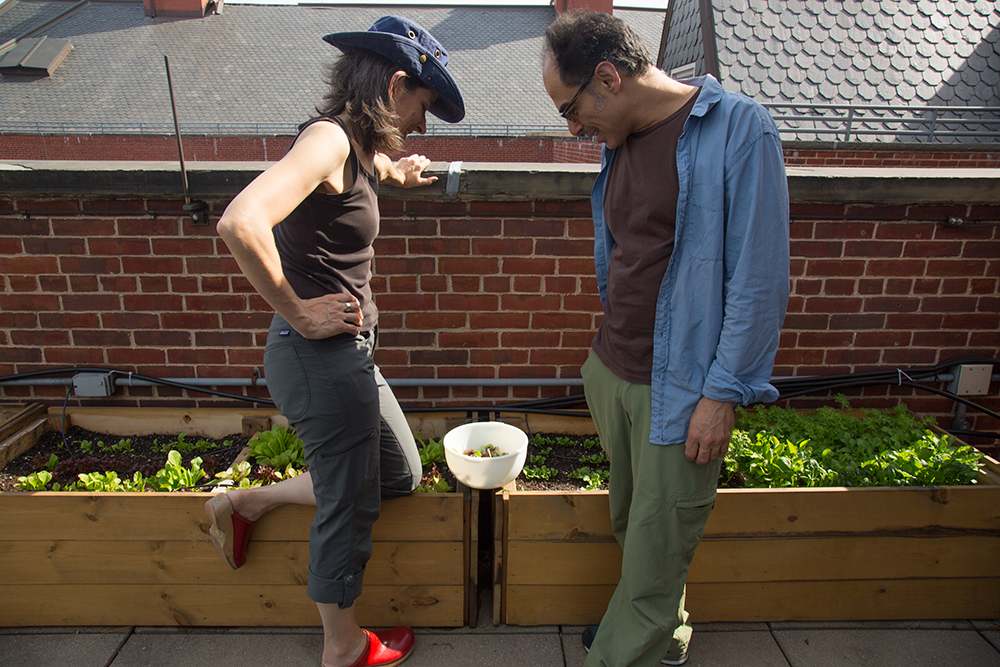 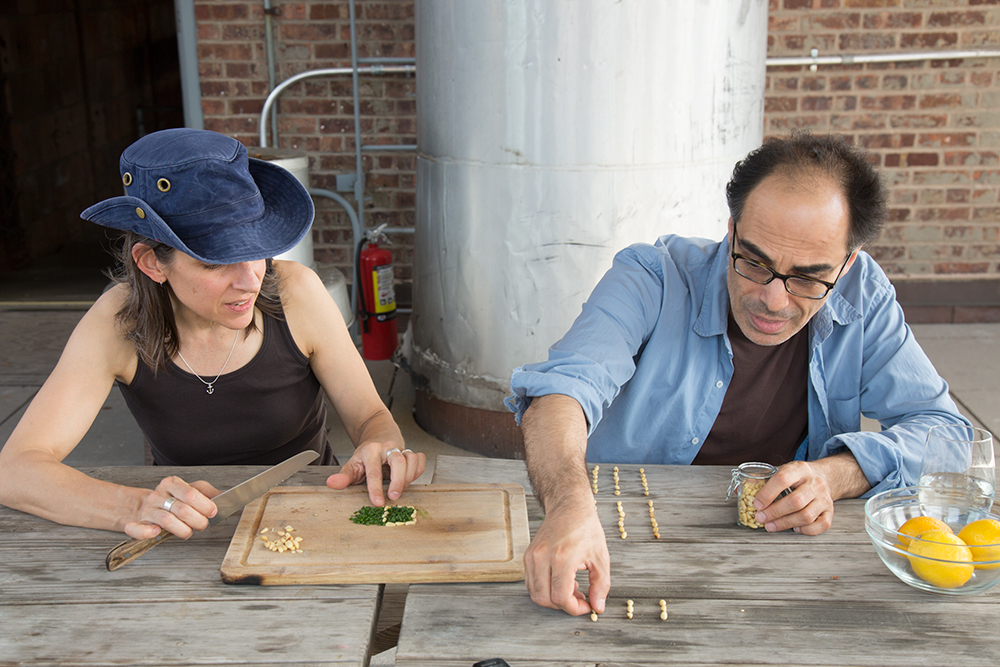 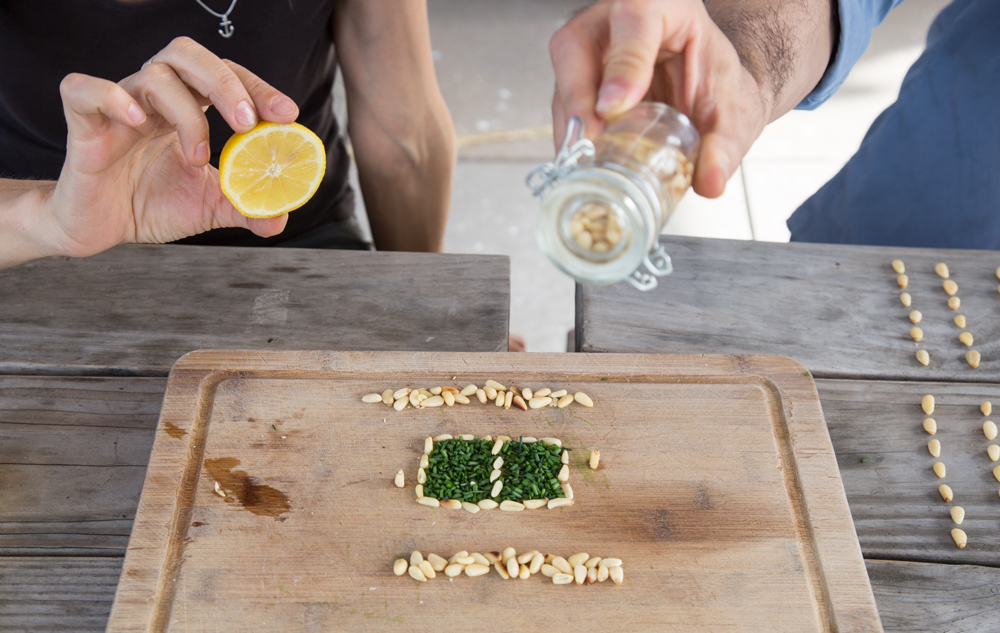 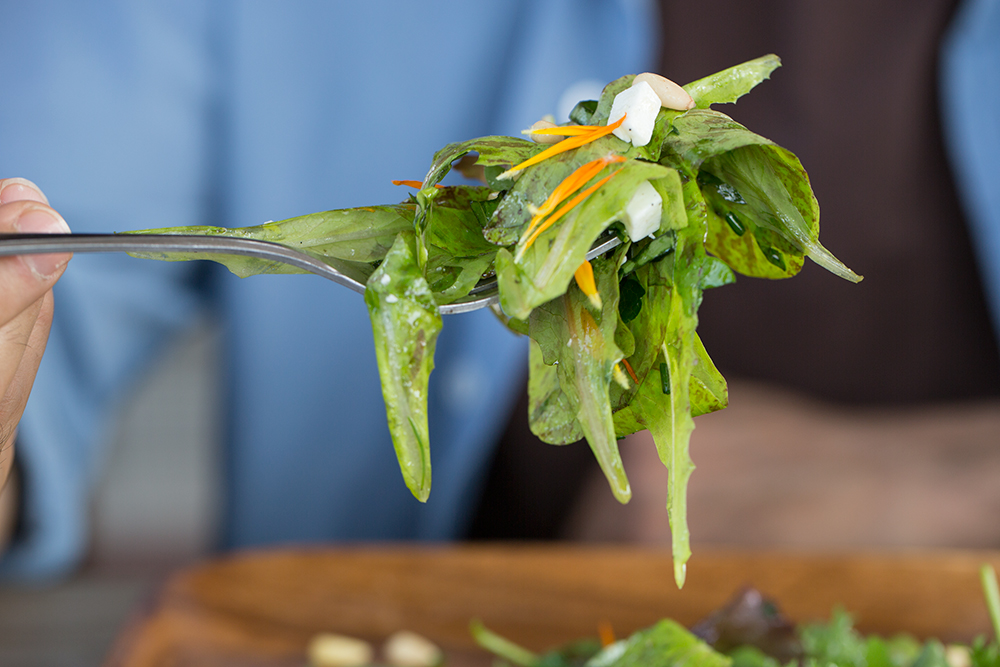 Toast pine nuts in a pan on low heat, moving every 30 seconds until they start to brown. Keep an eye on them, this happens fast.

Wash and spin your lettuce.

Mix lemon juice and olive oil in a small dish. Toss greens with dressing, season with salt and pepper and sprinkle chives and pine nuts on top. Add edible flowers (such as calendula) for garnish.

Toast pine nuts in a pan on low heat, moving every 30 seconds until they start to brown. Keep an eye on them, this happens fast.

Wash and spin your lettuce.

Mix lemon juice and olive oil in a small dish. Toss greens with dressing, season with salt and pepper and sprinkle chives and pine nuts on top. Add edible flowers (such as calendula) for garnish.

Nina Katchadourian, mixed-media artist, and Sina Najafi, founder and editor-in-chief of Cabinet Magazine, are no strangers to the notion of collaboration. Yes, they happen to be married, but they share an uncanny way of synthesizing the world: no historical anecdote or everyday material is too small to inspire either of them. Just glance at the index of the most recent issue of Cabinet featuring articles with subtitles such as “The culture of celebration at Çatalhöyük,” or “The martial moment of Israeli New Year’s cards.” And then do yourself a big favor, and watch this slideshow of Nina’s Seat Assignment photographic series. In this inexhaustible body of work, she transforms the mundane materials readily available to her as an airplane passenger, into playful, transcendent works of art. Think peanuts cum rainbows, and toilet seat covers intricately folded into headpieces for self-portraits in the style of 15th century Flemish painting, furtively photographed in the on-board lavatory. Not surprisingly, Sina and Nina, two of my first guest salad-chefs at the MoMA PS1 Salad Garden, are no less imaginative when their medium was salad itself. It was a special day for them — their tennis hero Rafael Nadal had just won the French Open. They arrived, elated, with pine nuts and feta cheese in hand, and we used the Salad Garden as a resource to explore and pay tribute to their shared role model.

Sina and Nina on Salad Then and Now

Julia: So, what is your favorite salad to make together at home?

Sina: Whatever we have in the fridge.

Nina: We make a lot of “Garbage Salads,” we throw a bunch of shit in a bowl. It is always good.

Julia: Sina, has anyone ever written a piece for Cabinet about salad?

Sina: Elena Sorokina wrote a piece about “Salad Olivier,” an ideological salad recipe included in a cookbook that Joseph Stalin published in the 1920’s. The salad illustrated the successful coexistence of the various cultures and territories under the Soviet Union. Olivier had been the chef at a high-end restaurant in Moscow before the Russian Revolution, and his original recipe included fish roe and lobster. In the Stalinist cookbook, the salad was transformed into a “humble,” salad. Lobster was replaced with carrots, since they are the same color —

Sina: Strangely, I ate a lot of Salad Olivier growing up in Iran. The humble version, which was potatoes, eggs, chicken, carrots, cornichons, boiled peas, and mayonnaise sauce—it is still the one foreign salad that middle class Iranians eat.

Julia: Nina, you spend a lot of time in Finland, and make artwork about that place, as your ancestral homeland. What is a typical Finnish Salad?

Nina: I spend time on a Finnish island. Food is complicated there; we think about it a lot. Because there are no roads, no cars and no shops, we rely on a “Shop Boat” — an ingeniously designed boat that sells everything imaginable; it is like the best NY deli. This is the last shop boat in Finland. Shopping there is a ritual.
I once accompanied them on their route starting on the mainland and stopping at the 20-25 coastal islands.
Even with the shop boat, it is hard to get a lot of fresh vegetables, so we tend to eat fewer green salads. It is more about dill, potatoes and fish.

SINA AND NINA ON RAFAEL NADAL

Sina: Today’s salad is less about us, and more about our sporting hero: tennis player Rafael Nadal. He won his 9th grand slam in the French Open this morning.

Sina: If he had lost, we would have all sat around an empty bowl. But, he won, so we will make a “tribute salad.” We will emphasize three of Rafael’s most prominent characteristics: wisdom, humility and obsessive compulsion. As soon as he wins one match, he begins training for the next match. He doesn’t stop to gloat. What do we have in the garden that could represent “resilience?”

Julia: Mint. It is impossible to kill. Luckily, it pairs well with feta and pine nuts, the extra ingredients you brought with you today.

Sina: Perfect. Nadal is the 2nd best tennis player of all time, but he still lives with his mother. He has made over 200 million dollars, but we love him because he still flies commercial. How can we represent humility in the salad?

Julia: Maybe with basil, an herb that is so common, so familiar to us all.

Nina: Yeah, basil is always important. Nadal is also known for his compulsive ticks and rituals: he pulls on his shorts, touches his nose and his ears in sequence before each set. People love to tease him about that.

Sina: We just need hints of Rafael Nadal in this salad?

Nina: What do you mean hints? Let’s go all the way. Maybe I can chop the chives in a very exacting way?

Sina: Is this too much information?

Julia: Not at all!

Sina: I will arrange 42 pine nuts in a perfect line, to represent his wins (and OCD).
French open is the first one, then he won another French open…
(Sina obsessively counts each pine nut to add to our plates, naming all of Rafael Nadal’s wins in chronological order)

Nina: (Intensely focused on her cutting board) I am arranging the chives into the shape of a tennis court, the pine nuts will make the lines of the court and the net. See, you are getting a sense of the way I arrange materials in my Seat Assignment series here.
Nina (cuts a lemon in half and holds it over the chive/pine nut tennis court) Look, the sun is shining over the stadium!
(Sina holds up the tiny jar of pine nuts over the tennis court)

Sina: Oh, and this is the blimp taking aerial photos of Wimbledon!

ON OPTIMISM, ROLE MODELS AND TAKING A CLOSER LOOK

Julia: This is a strangely appropriate way to gain insight into your practice… But, then again, I tap into the same pool of energy when I make art, as I do when I make a salad or a garden. I have been thinking a lot about how artists/creatives allocate their energy reserve.

Nina: An artist must also be a listener. An artist has to pay attention to where their obsessions and curiosities lead them. Play without rigor doesn’t get you very far. It is all about the follow-through, and having the nerve to take your own curiosity seriously.

Julia: Nina, in your work you always find something in nothing — in the mundane space of an airplane, or in your impulse to mend a broken spider web. Just because it’s funny, doesn’t mean it can’t be poignant. That same logic applies to the work you choose to publish in Cabinet, Sina.

Sina: Although I am not an artist, my job as a magazine-maker is also to listen, and to make space for as many voices as possible. But, I don’t think I bring the same passion to my work as I bring to watching tennis. I work harder at my job than I do at watching tennis.
(Nina Laughs)

Nina: Well, you worry equally about both.

Sina: A lot of creative people my age have become obsessed with sports. As soon as the match this morning was over, [art historian] Hal Foster sent me a congratulatory email. When you have been intensely focused on one discipline in your life, whether it was Art History or Literature, sports become a space where passion can emerge easily at our age.

Nina: It is embarrassing, but Rafa is a very useful role model for me as an artist.

Sina: John McEnroe thinks of Nadal as the “Leonardo” of tennis.

Nina: Rafa is serious about his craft, and performs at a million percent every time. There is a deep optimism there. My work is essentially optimistic about how intriguing the world can be if we just look a little closer.
But, sometimes I feel apologetic for my own optimism. Optimism isn’t always so fashionable in the art world, and certain versions of Social Practice have produced a very predictable type of sincerity… So I find myself looking for examples of optimism elsewhere.
As a child, I never thought I would become an artist. Eventually, I figured out that “artist” is the best umbrella term for everything I want to do in life.
Julia, do people assume that this garden is a “social practice” project?

Julia: It is important to me to distinguish that this is a garden, not a “conceptual garden as art project,” but a garden. That is interesting in-and-of-itself.

Julia: That is what has always attracted me to Cabinet Magazine. You two (Sina and Nina) also have this perspective in common — a knack for finding inspiration in weird places, and trying to process the world without committing to a single answer.

Nina: Oh look, a whole cluster of balloons that have been let go on the horizon! (Nina point off into the Manhattan skyline)