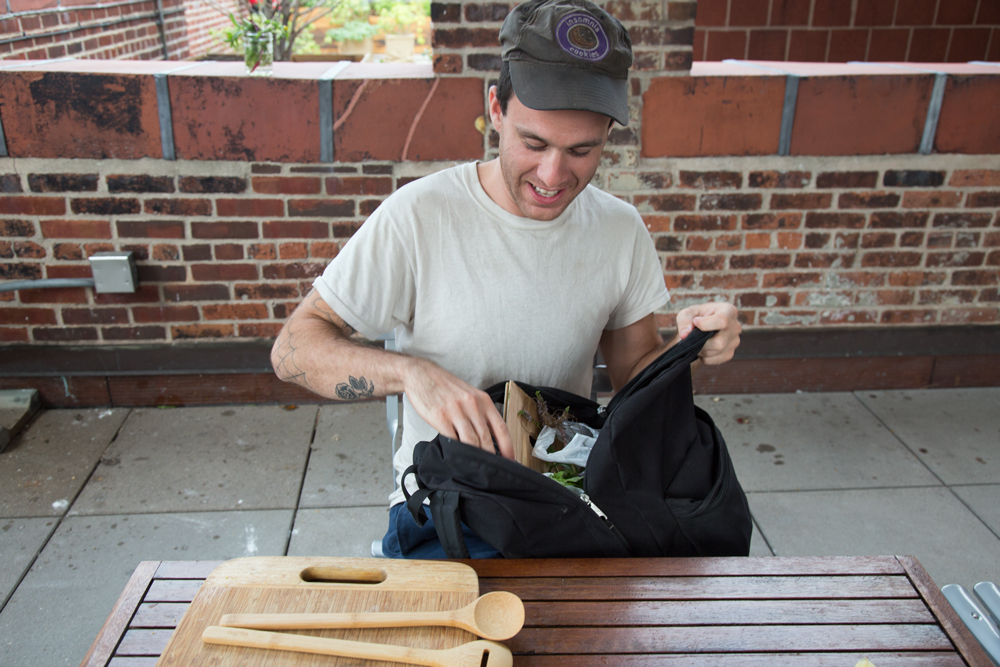 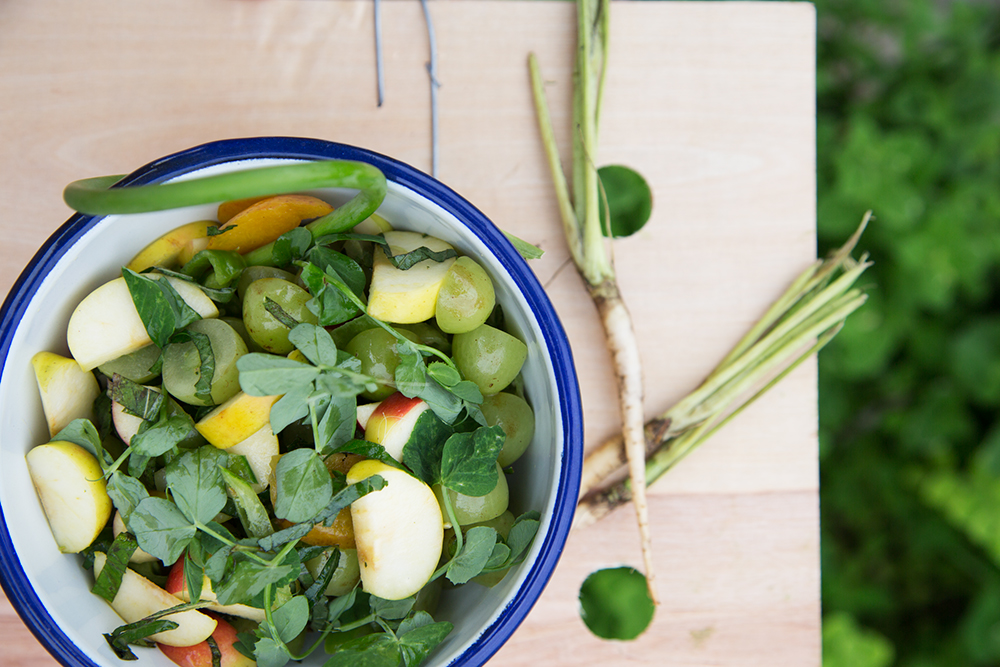 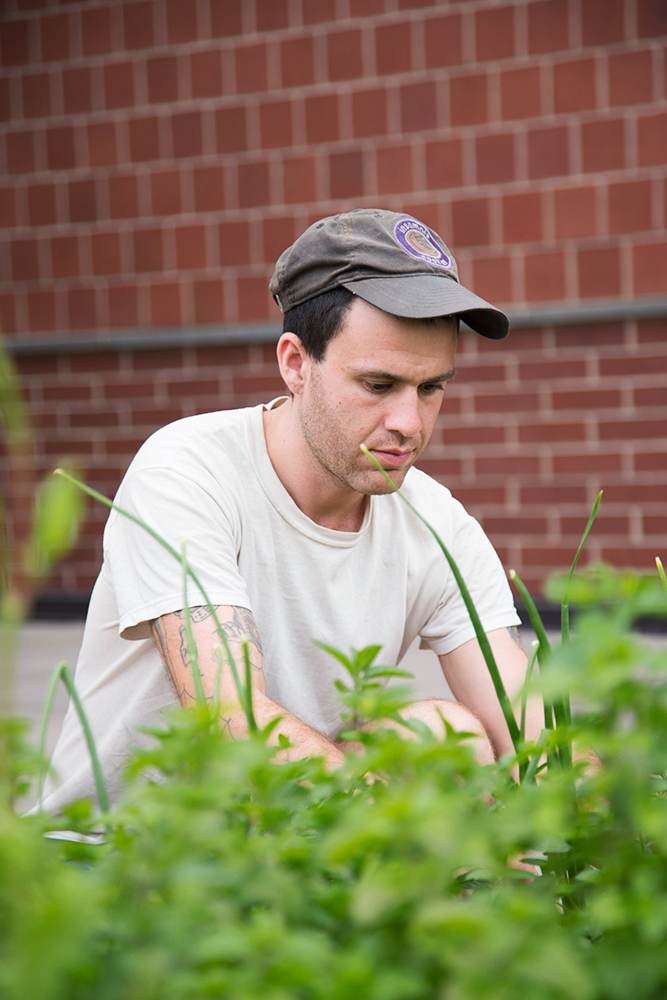 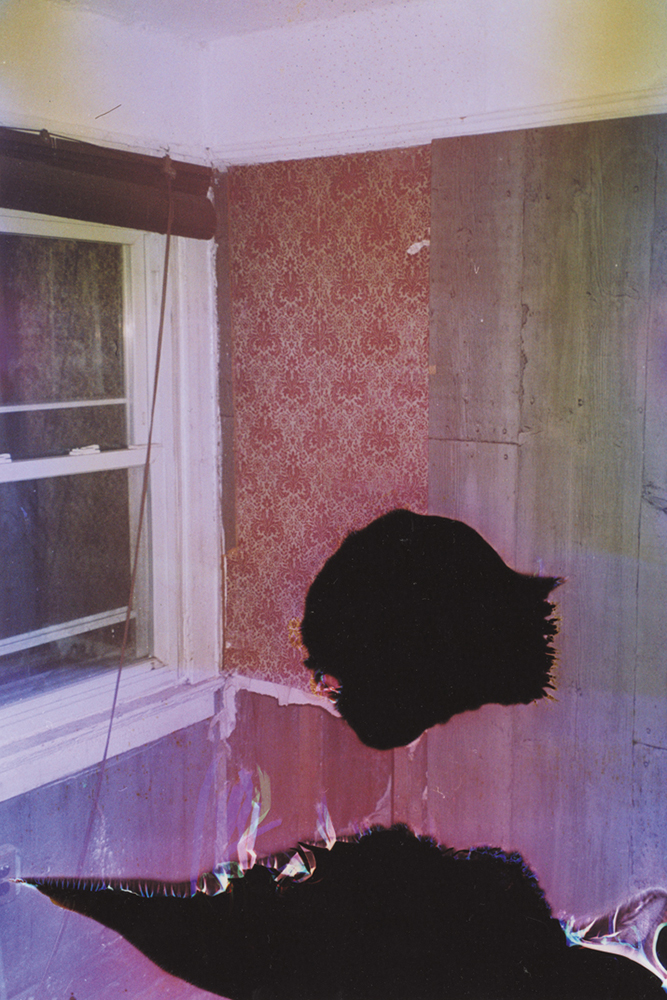 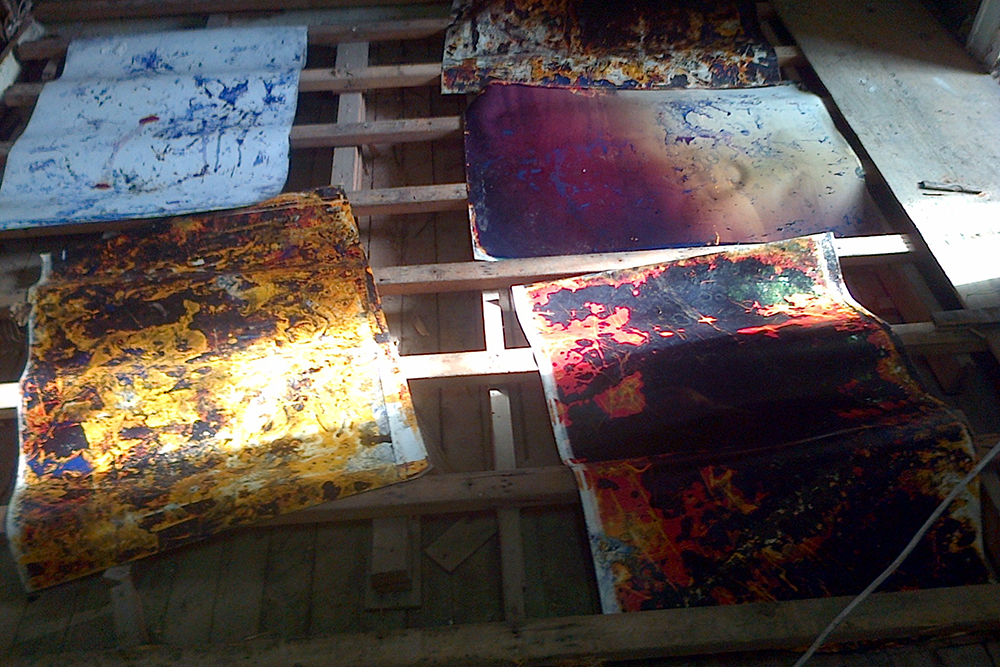 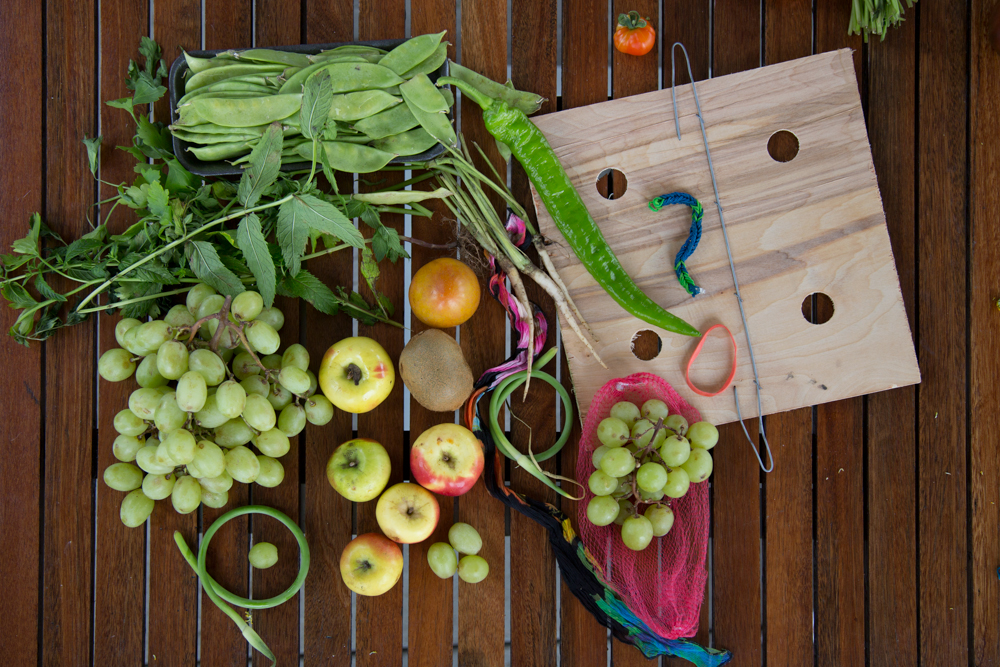 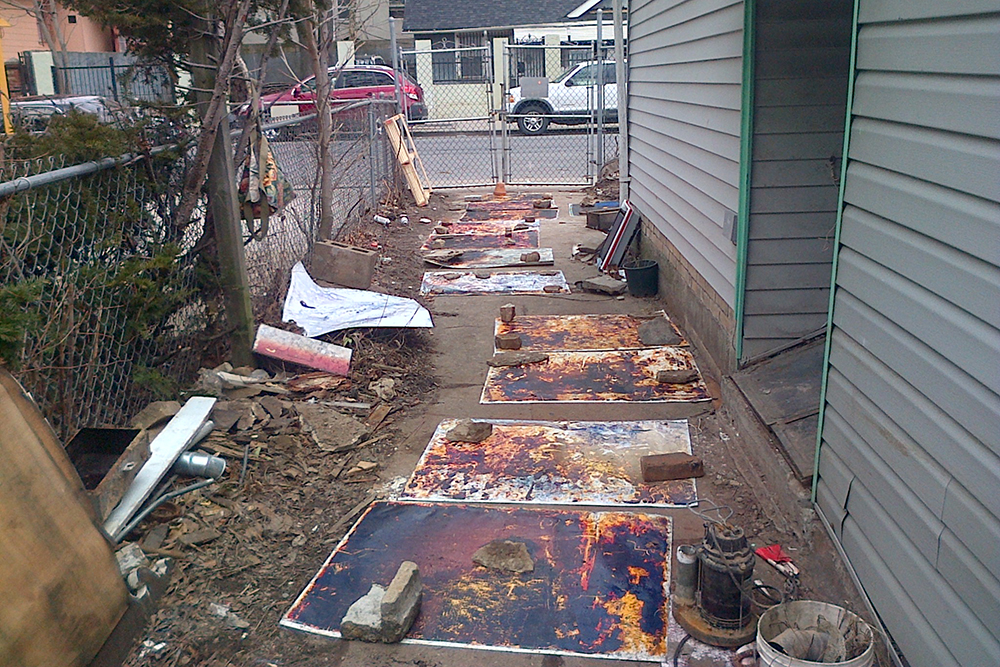 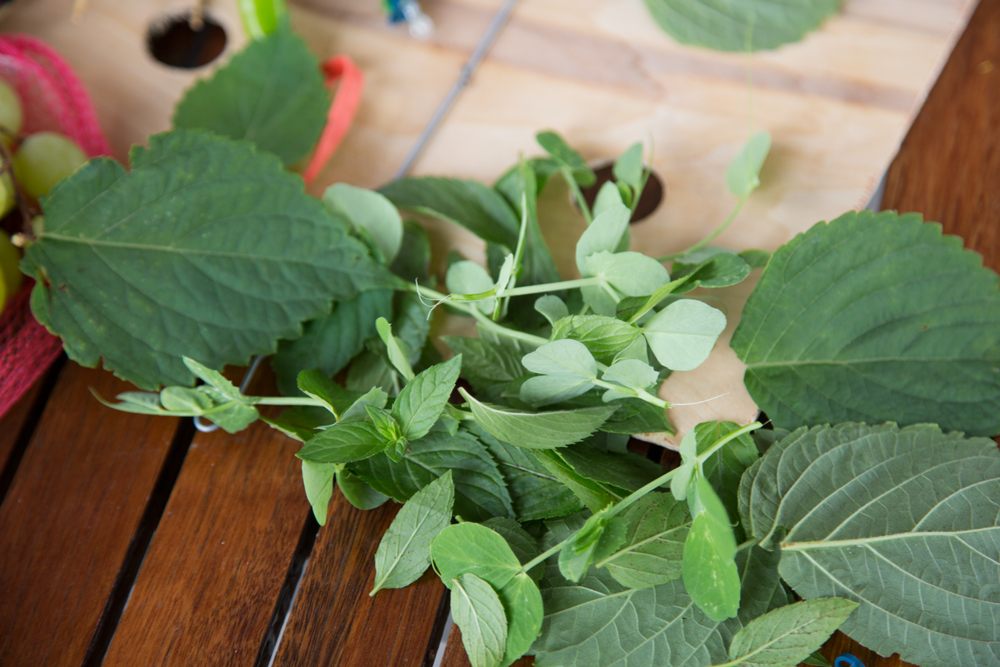 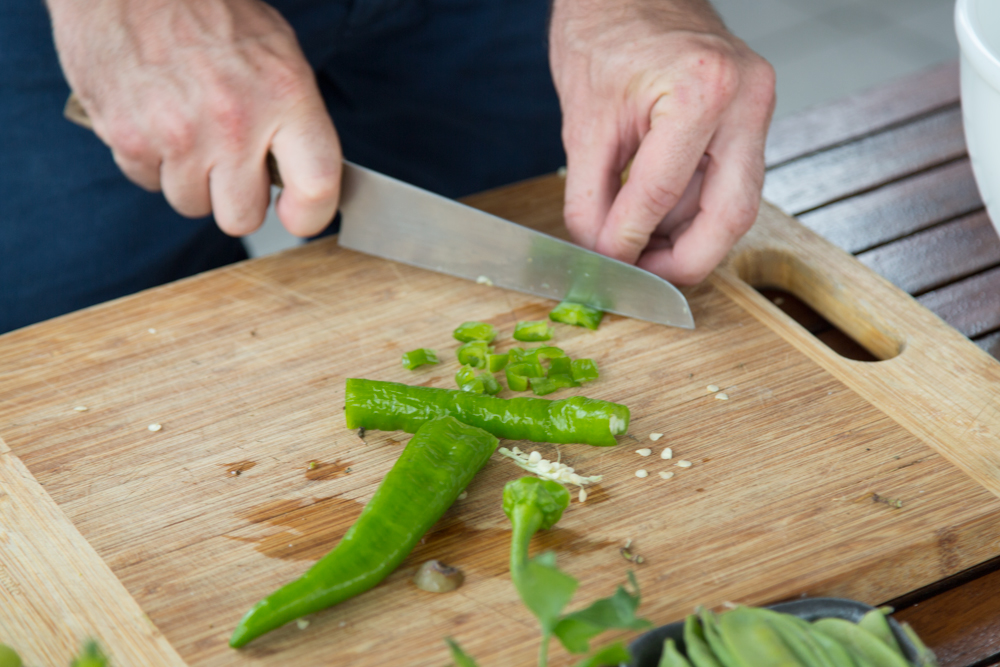 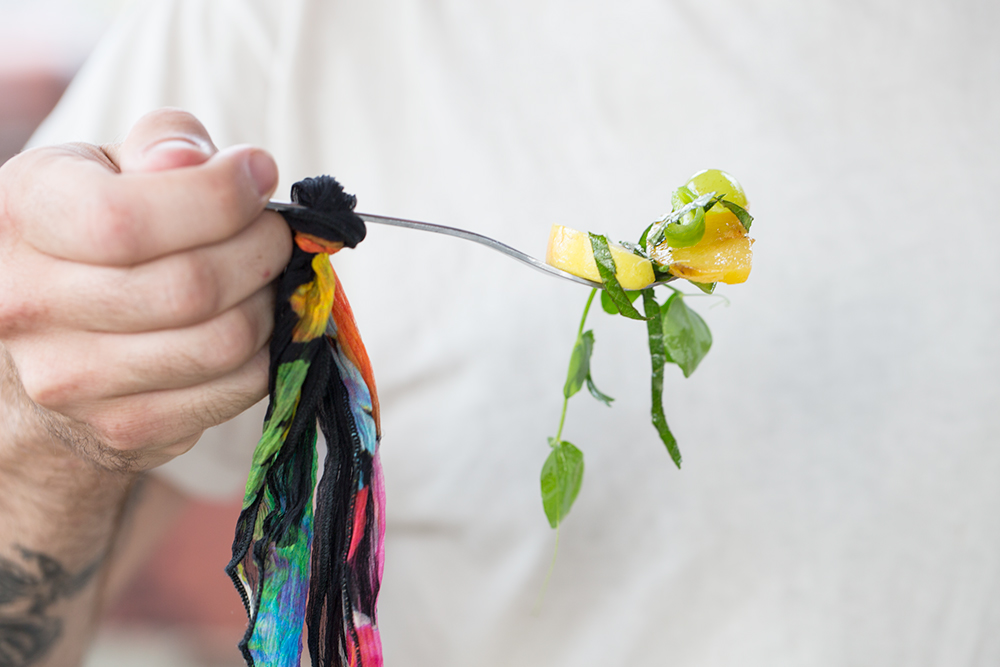 For this salad, we worked within the bounds of what Ryan could find in the dumpster that day. But, this salad would be best made with watermelon instead of grapes, crab apples and plums.

Cut all fruit into 1″ pieces. Submerge apples in a a bath of ice water and lemon juice if not serving immediately.

Mince hot pepper and finely chop shiso and mint. Toss with fruit in a serving bowl.

Whisk together dressing ingredients until the oil is emulsified. Toss with fruit and pea shoots, season with salt and pepper to taste,  serve.

Cut all fruit into 1″ pieces. Submerge apples in a a bath of ice water and lemon juice if not serving immediately.

Mince hot pepper and finely chop shiso and mint. Toss with fruit in a serving bowl.

Whisk together dressing ingredients until the oil is emulsified. Toss with fruit and pea shoots, season with salt and pepper to taste,  serve.

Ryan Foerster is fucking with you. But he is doing so with the best of intentions.

Ryan and I met when he participated in an event I organized this past winter called the Artist Tag Sale. 45 contemporary New York artists assumed a pseudonym and sold off their early work for $50 or less. Collectors, passersby, and hoarders alike were lured to the site with the promise of high art at low prices, but they had to discern for themselves what was worth buying, since the name and pedigree of the artist would be concealed. But, Ryan chose to go by his own name, shirking anonymity.  He sold a bunch of old t-shirts and ripped out pages from magazines with the name “Robert Jantiz” messily scrawled in red paint on them (Robert is an artist and close friend of Ryan’s). He stood by as people frantically purchased this trumped-up detritus, eager to own a piece of Ryan’s “work.” Just months later, these same pieces were being flipped, sold for 100 times the original sale price, at which point, Ryan stopped making them. The joke was over. Sorry Robert.

Ryan is not a culinary genius by any means, but I like his style. He refuses to live at the whim of the market… any market really, not just the art market. Ryan rescues food from the dumpster, salvages materials from shuttered dark rooms and (lazily) grows his own food in his house in Brighton Beach. This resourcefulness is compelling, even if it does not always result in gourmet meals, it generally results in good art. Ryan and I collaborated for this recipe.  The fruit was salvaged from the dumpster of his local grocery store, and my herbs and greens from the MoMA PS1 Salad Garden. An unlikely, but happy pairing.

Ryan Foerster in His Own Words

Ryan: [Unpacking his backpack full of vegetables and fruit] This produce comes from the dumpster in my neighborhood, but I think we could make something good with it, maybe a sweet and spicy fruit salad? At the end of the night in Brighton Beach [Brooklyn], there is so much to dumpster dive; it gets competitive.

Julia: Do you see the same faces every time you go?

Ryan: There are always about 10 old ladies crowded around the garbage as soon as they put it out, some of them are regulars.

Julia: What’s the best thing you have found in the dumpster?

Ryan: I can’t answer that question, because even when you find something good, it is tossed out in such massive quantities, that you get sick of it.

Julia: I like the idea that you barely purchase anything new, but somehow, you live in a state of overwhelming abundance.

Ryan: Yeah, I used to live on a diet of coffee for breakfast, fresh air for lunch, pizza for dinner and beer for dessert, so this is a step in the right direction.

Julia: I see you salvaged a few non-food items, what are those?

Ryan:  I have been taking these nice wooden objects out of the dumpster (Ryan holds up the thin wooden panel sides of the vegetable crates). I also found a rubber band bracelet and a little scarf. I just like them. I also brought a few things from my garden for the salad. This year, we are practicing “anti-gardening.” We let everything grow on its own, without encouragement. Somehow, we have sunflowers, string beans and 25 tomato plants. I don’t even stake them so they just grow like wild vines.

Julia:  That annoys me, do you know how much work I put into the garden?

Ryan: I know! But, I can’t get too attached to the plants because people steal the flowers — they rip their heads off. I haven’t even watered the garden once this summer.

Julia: I have always thought it was weird that people didn’t steal plants more often. They are high on my list of things worth stealing.

Ryan: Well, ripping the head of a sunflower off is a lot of work, without a knife…

Julia: Wait, the plant burglars don’t even use a knife???

Ryan: No, it’s just some crack-head in the middle of the night. They tear the thing to shreds.

Julia: When did you move to Brighton Beach?

Ryan: 3 years ago. I can’t say I love it there, but it never gets boring.  It feels worlds away, yet I can be in the city in 45 minutes. It’s colorful, to say the least… On my way here I saw a drunk, old lady lying face down on the subway stairs. People were just stepping over her. I see her all the time. There are lots of people taking shits on the sidewalk too.

Julia: Huh, I haven’t seen that side of Brighton Beach, but I only go there to drink beer, eat pickles and visit the Russian nightclubs…Why did you move there?

Ryan: The house I live in belongs to an older artist friend; it was her summer studio when she was younger. I was totally broke, and she said I could stay there if I paid the utilities, so I moved there in the middle of the winter. Now, I live there free of charge, because I renovated the place after Hurricane Sandy. It took me 7 months to fix the place up.

Those 7 months were productive for me – I made a whole body of work alongside the renovation. So many of my prints were destroyed in the flood, so I found a way to restore both my artwork and the house, simultaneously. I would bring photos inside and drape them over the exposed, moldy floor beams to dry them out. We had de-humidifers going for a month and a half.

Julia: Have you ever done any projects that involve food?

Ryan: My friend was dating a girl who worked at a glass-blowing studio. I told everyone that they were collaborating on artworks when they hang out there late at night — she blows glass bottles and he puts his leftover sandwich inside. Everyone was like, ‘ what the fuck?’ I kept spreading the rumor, and then for the Art Book Fair at MoMA PS1, I bought 40s, cut off the bottoms, and shoved the ends of deli sandwiches inside. Then I glued the bottoms of the bottles back on. I sold them at the fair, entitled, Sandwich In A Bottle.

The sculptures were priced according to the value of the sandwich, anywhere between $5-$10. Some were cheese and pickles, and some had meat in them. I often buy shitty deli sandwiches that are so huge, I can only eat a half at a time, and so I end up with the butts of multiple sandwiches sitting in my fridge. These things became the hit of the art fair. Maurizio Catalan bought all of them and was walking around the fair handing them out. So, I pulled an all-nighter, and ended up flooding the market with 25 of them the next day. The gallerist only managed to sell half of them, and their value plummeted.

Julia: Well, you shouldn’t have put them all out at once. They are each unique work, no two sandwiches are the same.

Ryan: Well, yeah, but they explode in about a year. The bottles were resealed, so the ones with meat eventually combusted, leaving shards of glass and rotten food all over people’s living rooms.

Julia: What are you working on now that the market for sandwiches in a bottle has collapsed?

Ryan: I used to work at The Camera Club of New York in their darkroom. They recently closed, and I took all of their old darkroom materials. I don’t want to buy anything new, I just want to reuse people’s leftovers. I don’t even know what most of the photo chemicals are since their labels have faded away. I brought it all to Brighton Beach so I can experiment with them outside. But, it is hard for me to motivate in the summer…Right now, I am focusing on my driving lessons, it’s really satisfying and funny to learn to drive at the age of 30. I finish my lessons at 10am, and I’m like, ‘alright, I’ve accomplished a lot already, days’ over!”