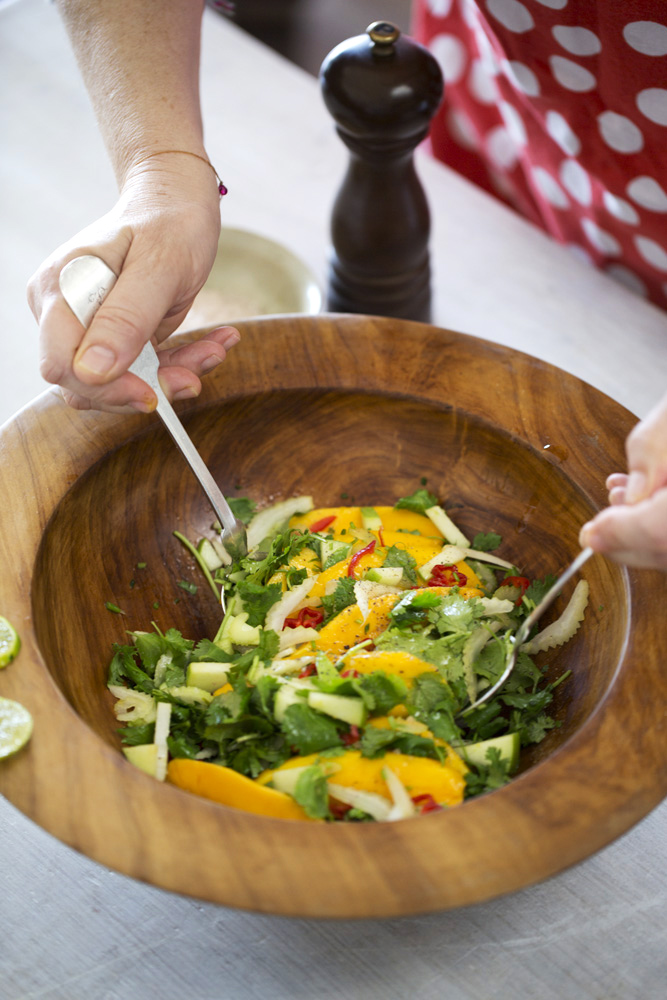 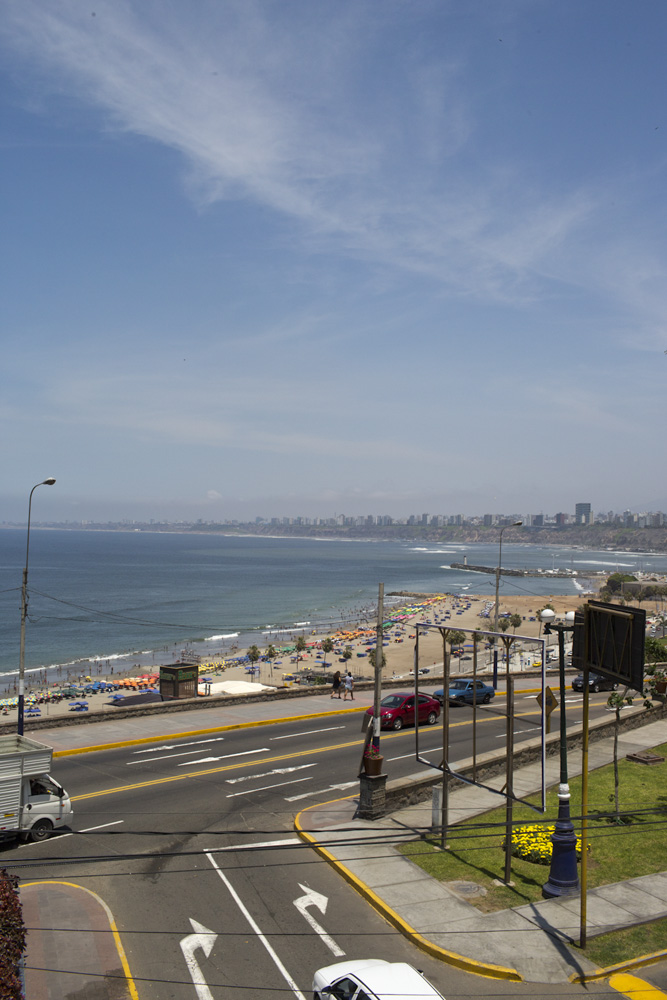 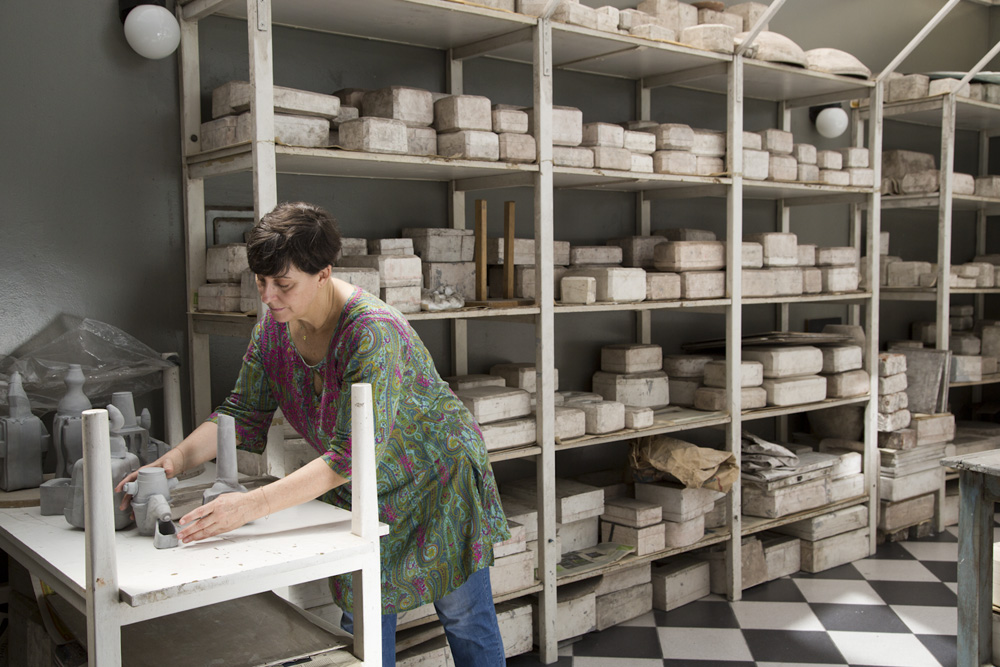 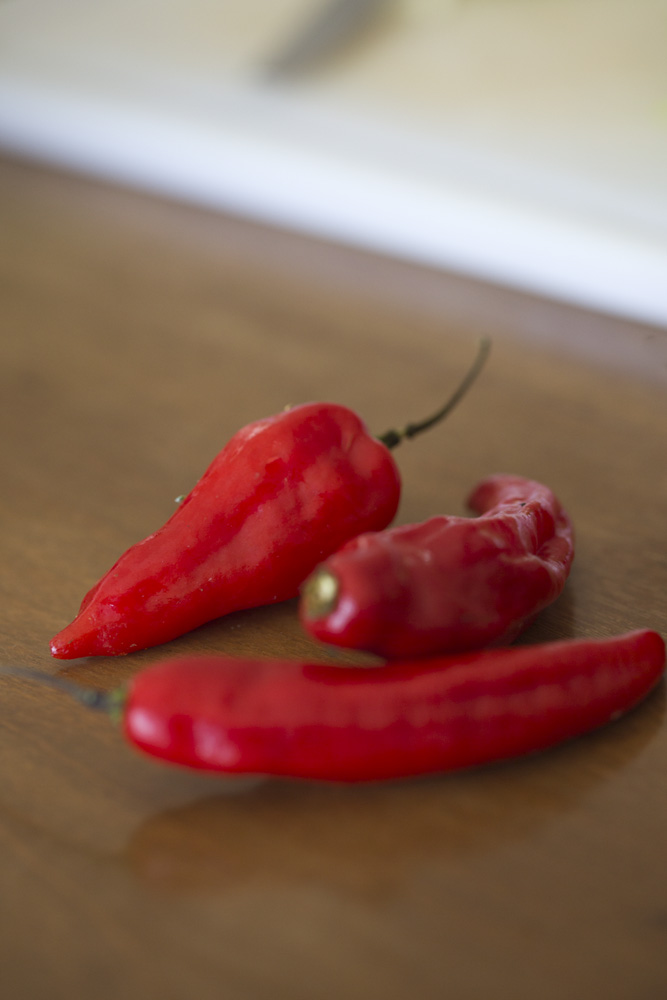 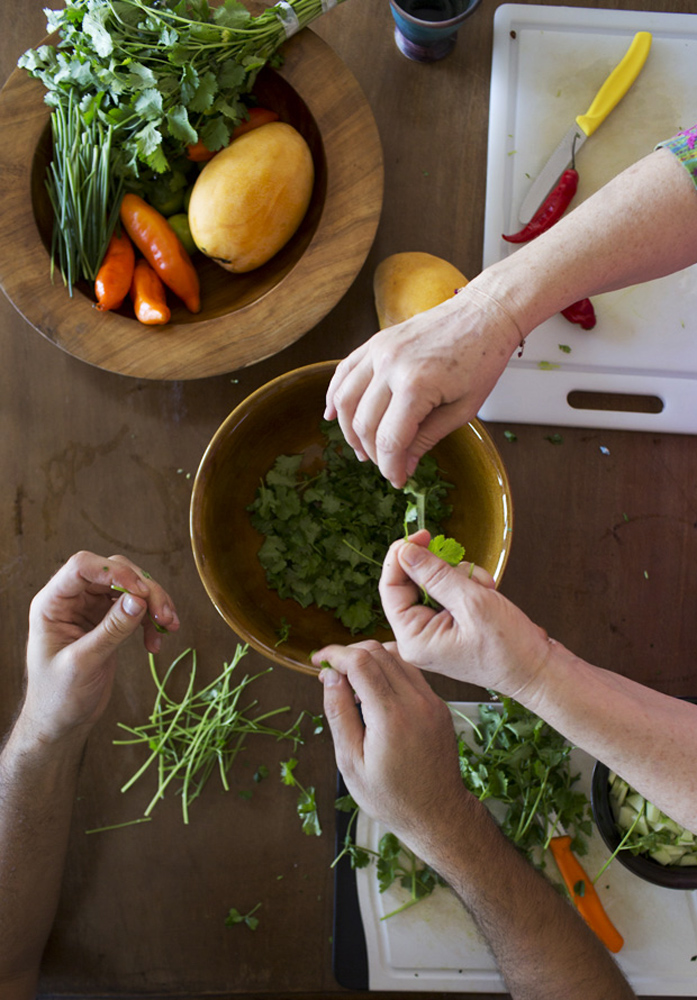 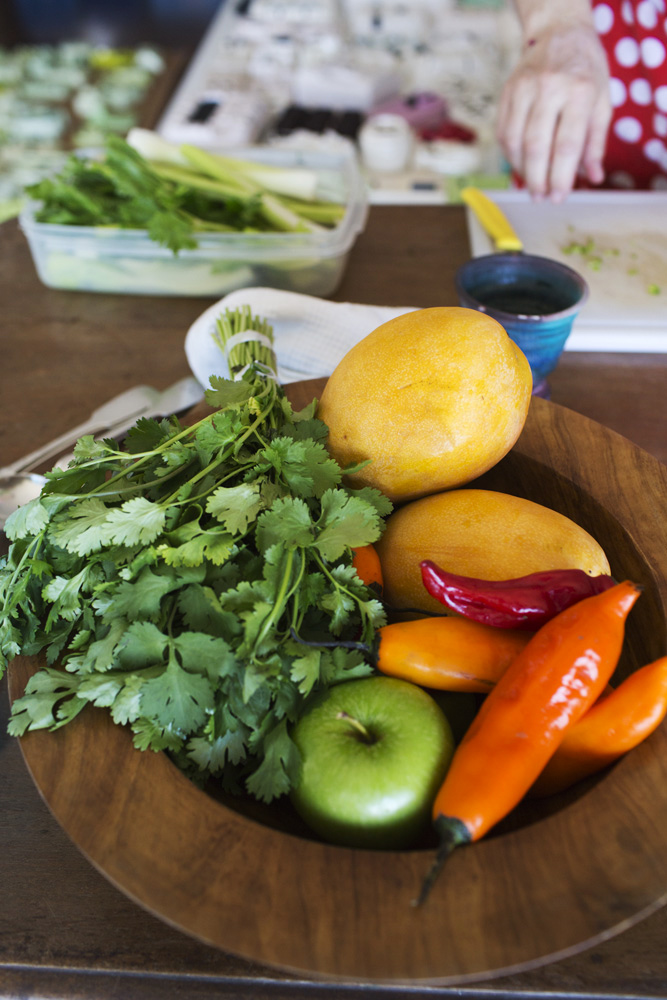 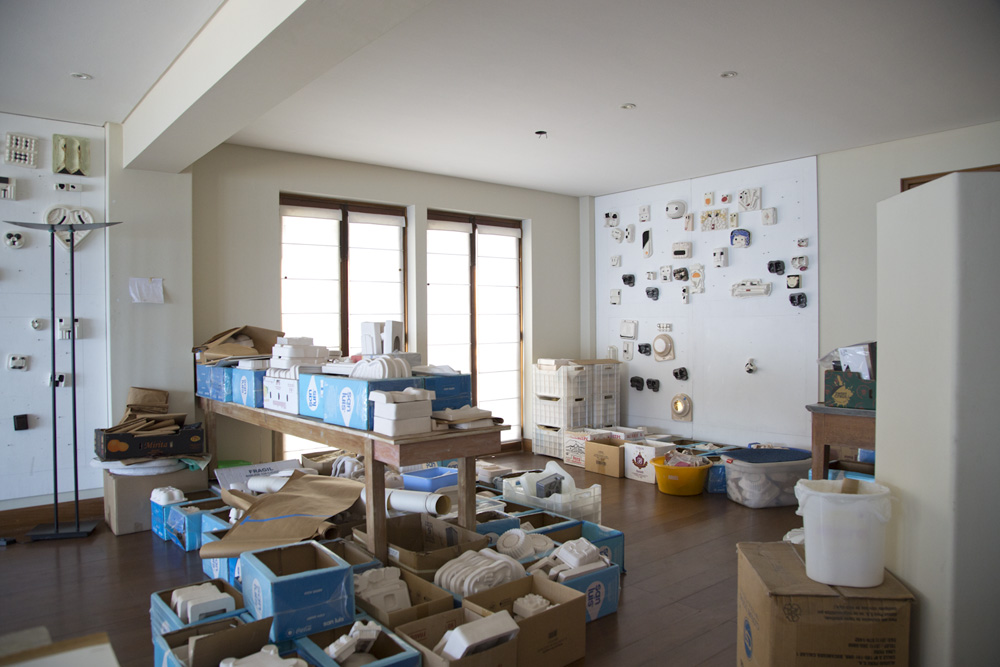 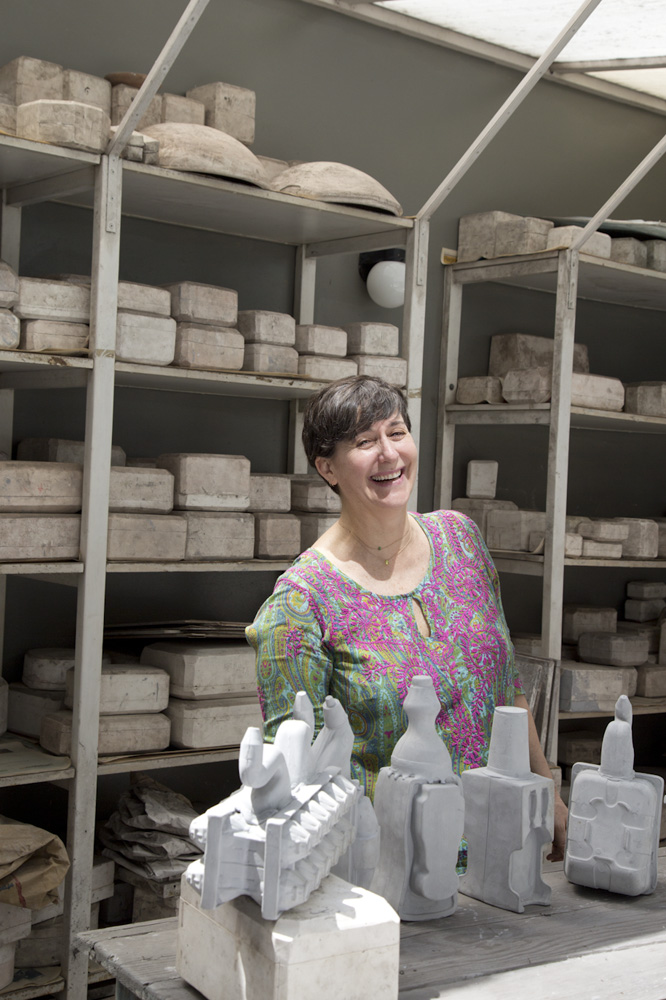 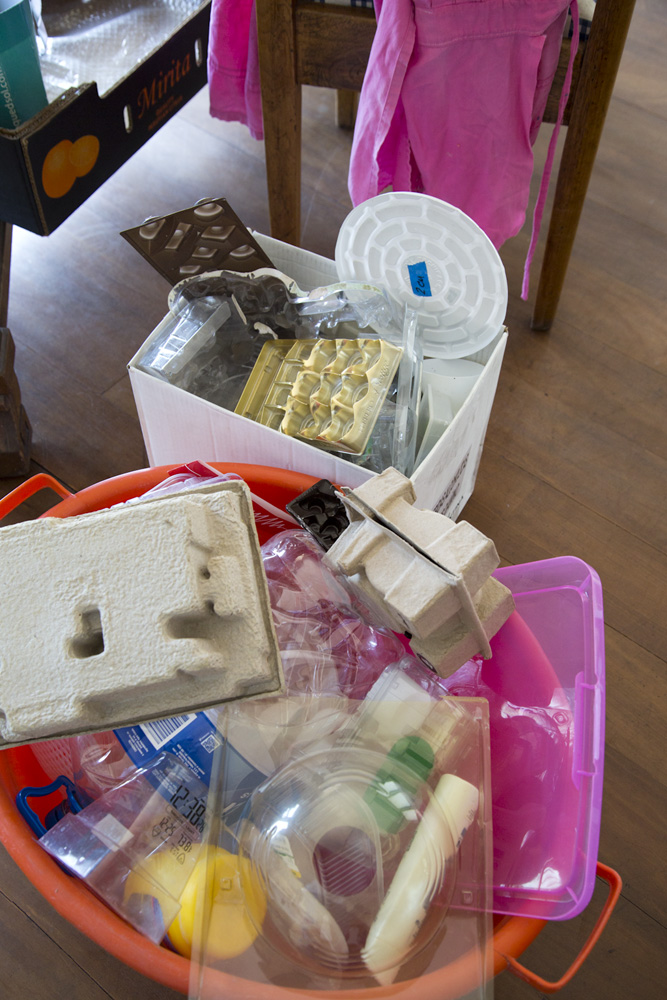 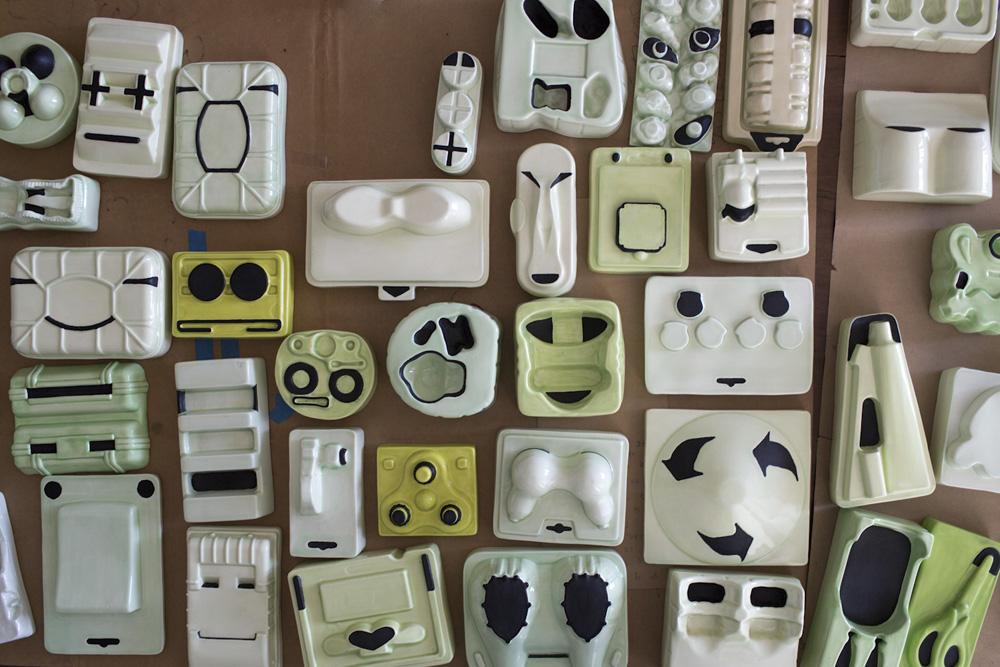 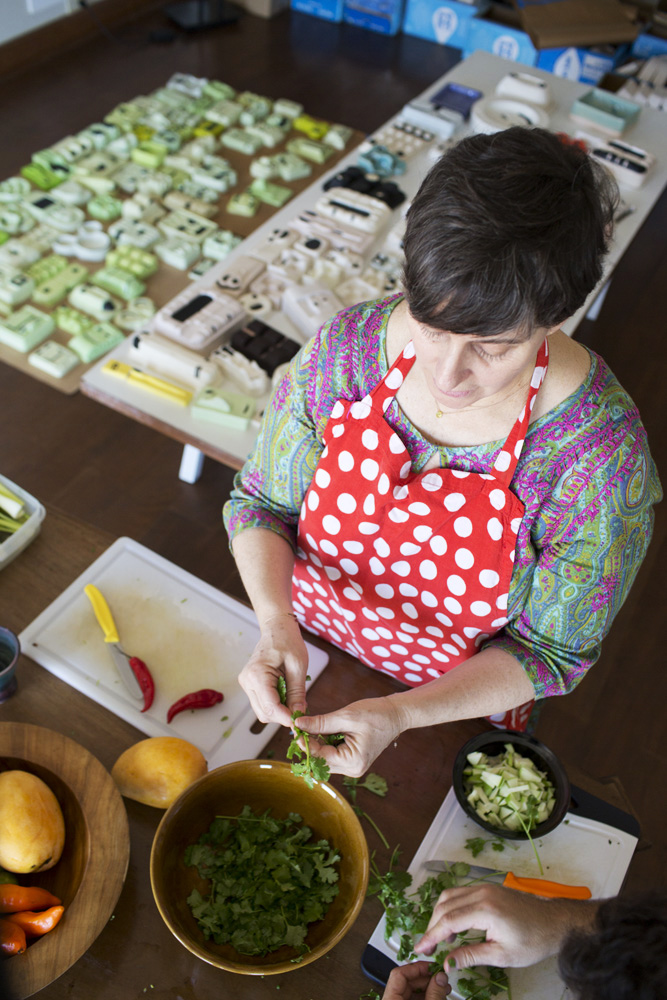 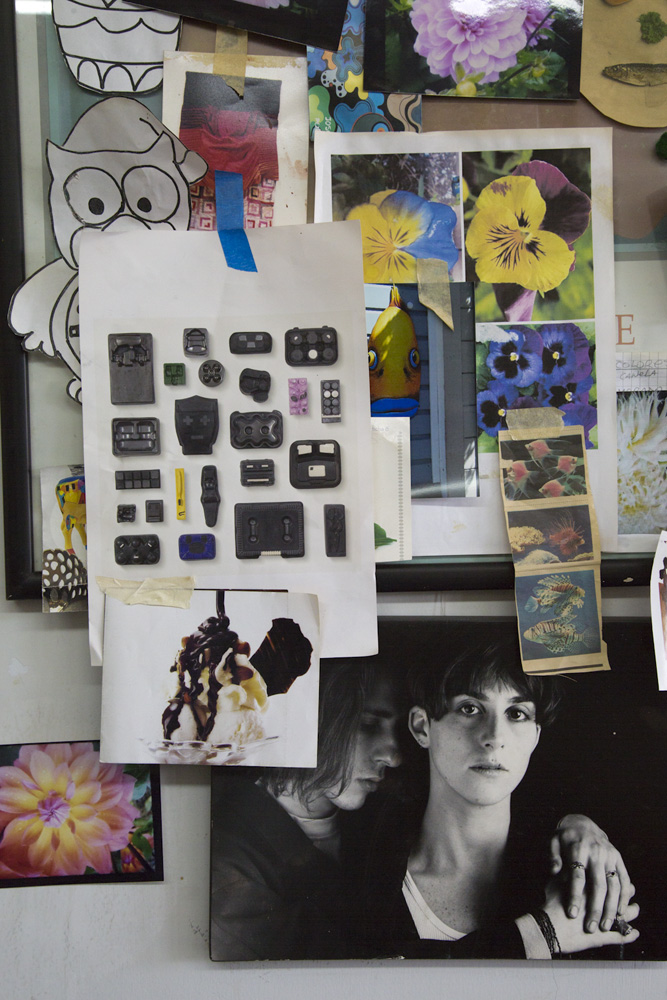 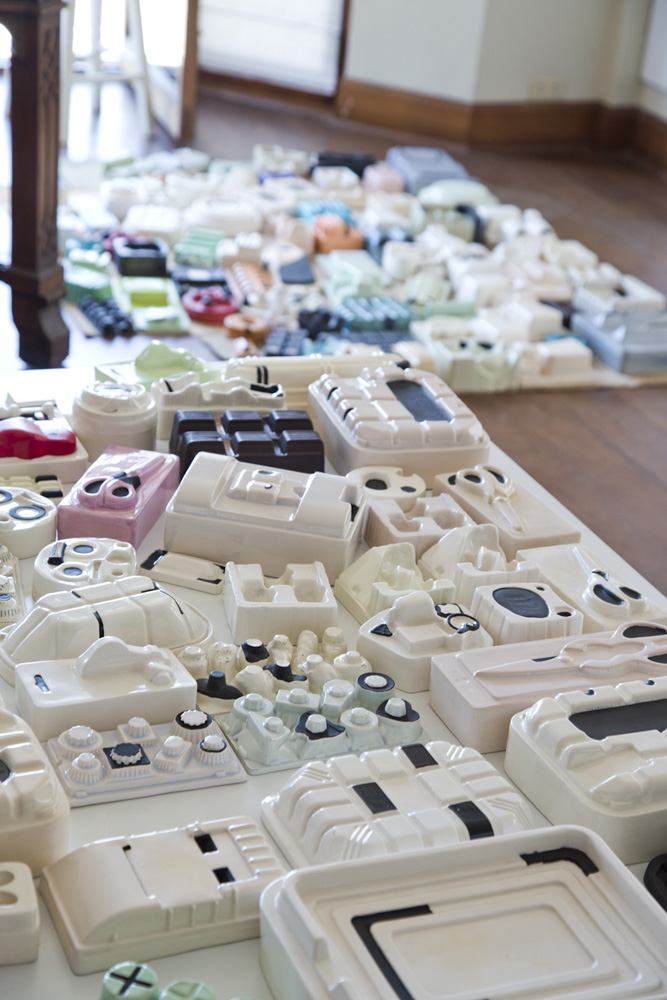 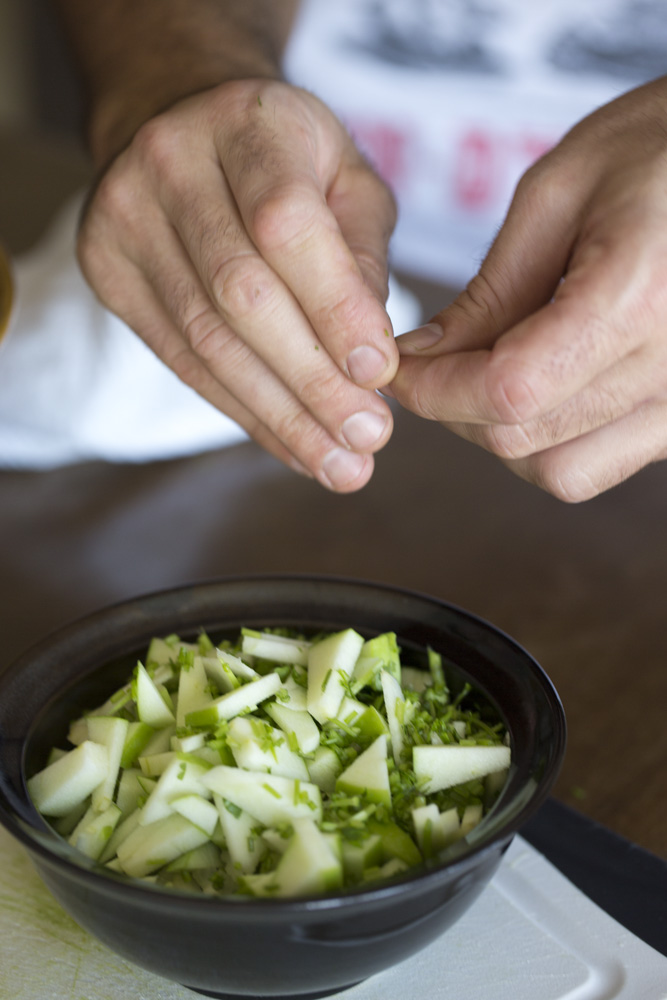 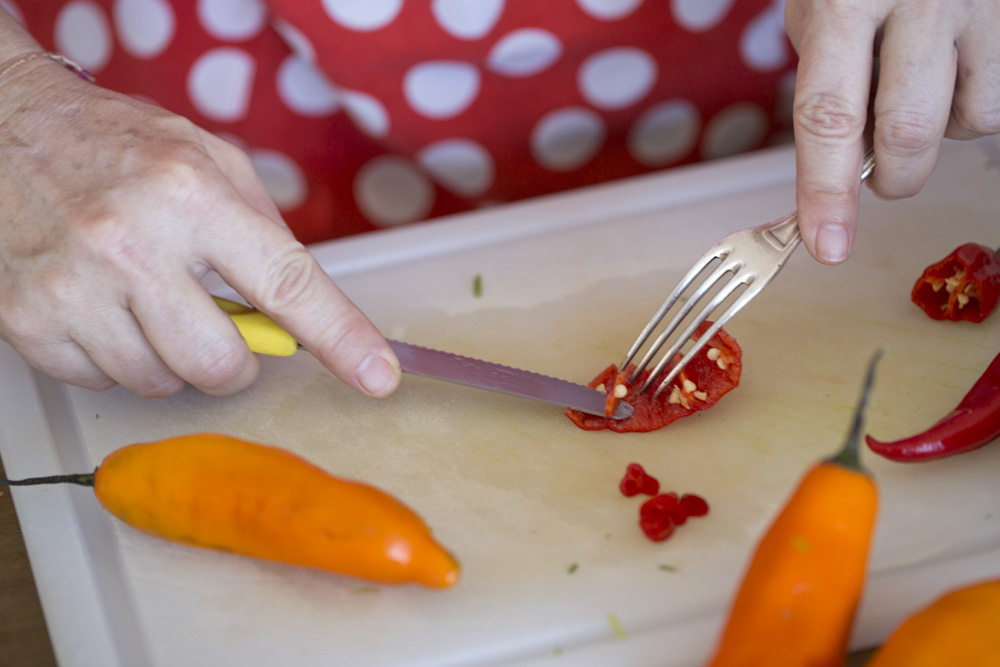 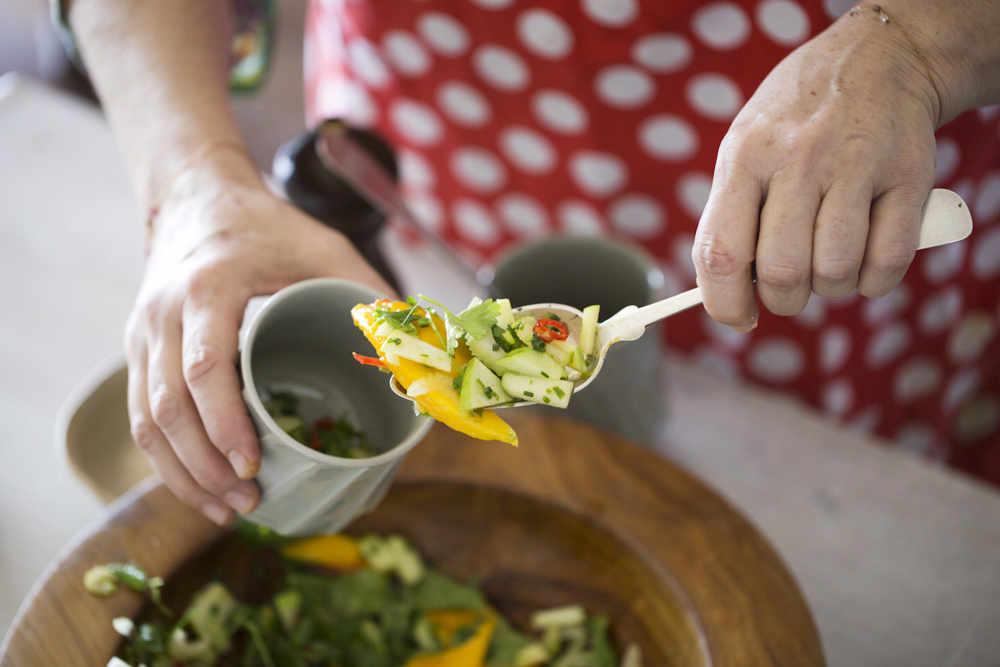 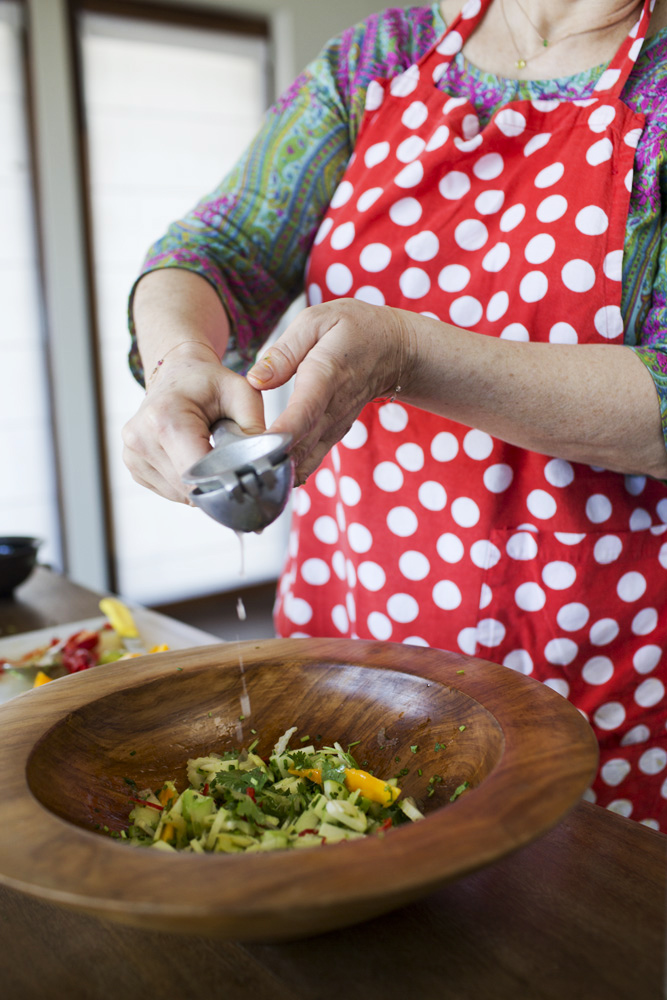 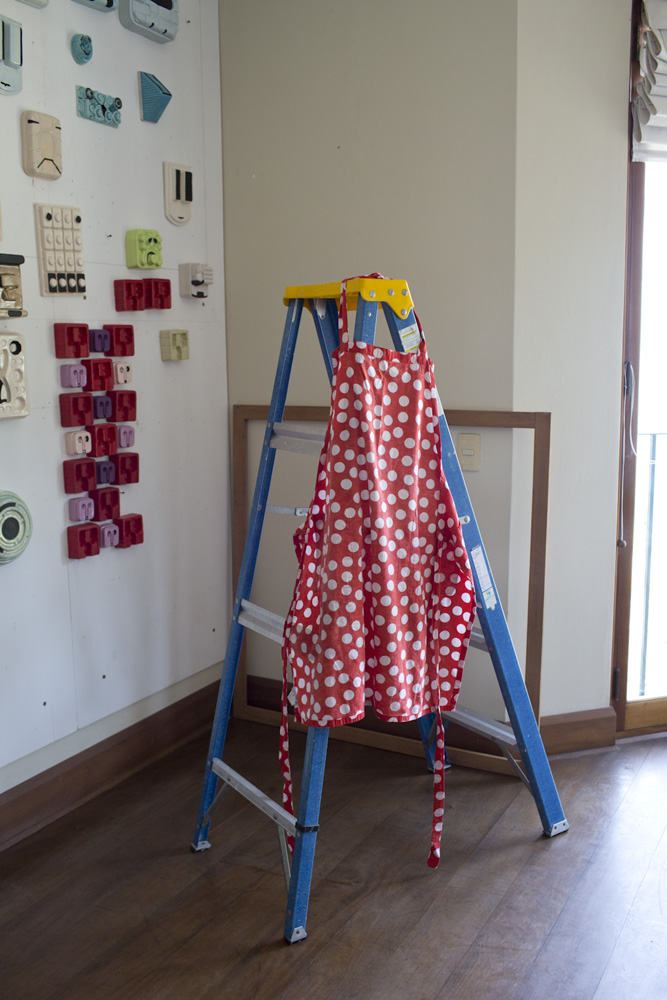 A spicy refreshing salad, with the feeling of a vegetarian ceviche, with lots of lime, chile and cilantro. If you are not in Peru, where the mangos are transcendental, use Ataulfos mangos from Mexico that come into the market early March through July. They are the smaller, yellow ones that are ready to eat when the skin appears a bit wrinkly. Aji peppers are the cornerstone of Peruvian cuisine. You can find these at Latin markets, and the trick is to remove the veins, as Pati does, just shaving the top layer of the inside of the pepper, where the seeds have left their spicy oils behind. If you cannot find Aji Limo, substitute Serrano peppers, or buy Aji Limo in a jar, adding a touch to the salad and mixing thoroughly.

Peel the mango fruits and remove the pit. Cut into 1/2″ slices and set aside.

Cut the sticks of celery horizontally into thin half moon shapes and coarsely chop the leaves.

Separate the cilantro leaves from the stems. Set aside. Trim and discard the bottom 2″ from the stems, and then finely chop the nice green cilantro stems.

Add celery, apple, peppers, apple, chives and cilantro stems to the salad bowl along with half the cilantro leaves.

Add 3 tablespoons of olive oil to the bowl and mix. Squeeze the lime juice straight into the bowl. Season with salt and pepper and toss to combine.

Peel the mango fruits and remove the pit. Cut into 1/2″ slices and set aside.

Cut the sticks of celery horizontally into thin half moon shapes and coarsely chop the leaves.

Separate the cilantro leaves from the stems. Set aside. Trim and discard the bottom 2″ from the stems, and then finely chop the nice green cilantro stems.

Add celery, apple, peppers, apple, chives and cilantro stems to the salad bowl along with half the cilantro leaves.

Add 3 tablespoons of olive oil to the bowl and mix. Squeeze the lime juice straight into the bowl. Season with salt and pepper and toss to combine.

Pati Camet sees faces in everything from the take-out rotisseries chicken container, to the plastic packaging on your Apple headphones. In her light-filled studio over-looking the beaches of Lima, Peru, Pati rescues the detritus of our consumerist culture, personifies it and transforms it into something all her own. Making molds and casting ceramics, Pati is building an endless archive of what she calls her Emoticon sculptures, and after an afternoon viewing the material world through her eyes, I began to see the faces too. A project rooted in anxieties over the endless waste in our everyday lives, there is an optimism to her to perspective that is contagious, and happily so.

Pati Camet in Her Own Words

Julia Sherman: You have an impressive collection of trash here.

Pati Camet: Being an artist, I kept thinking that industrial design of all of this packaging is amazing, but at the same time I had mixed feelings about its impact on the world. I thought, maybe I could contribute with at least one little grain of sand if I used this trash to make my art. I kept saving more and more material, and then one day I realized I had run out of space. Everything was stacked perfectly in my closet, and I decided to toss all of it away. But when I took a closer look at piece of trash, I saw they had faces; they were talking to me about protecting the environment. So, I did this huge exhibition, which was 70 square meters.

Julia Sherman: Very nice. How do you sell them? Do people have to buy the entire installation, or are you open to creaking up the group?

PC: I think displaying them in a grid gives the work a pre-Columbian feeling, like Peruvian textiles. Since then, I have been selling the work by the square meter. There is a Mickey Mouse one that tends to be people’s favorites in Peru. I make sure I don’t sell the Mickey Mouse on its own. I don’t want to sell it to someone just because someone likes Disneyland. They have to be sold as a group. [Pointing to a plastic package] I didn’t have to do anything to it. It is just smiling at me. It was saying “save me” or something. Look at this one. This is the sandwich that they sell in a gas station in the little packages. Look at that beauty. I didn’t invent it.

JS: I love that one.

PC: So, everything is beautiful and it’s not made by me. Its some industrial designer. [Pointing to another package] This is how the avocados are transported to America. It’s beautiful. Doesn’t it look like Betty Boop?

PC: So, yes, a lot of it is related to food. That is the top of a rotisserie chicken container. Let me find the bottom because it is beautiful…A lot of them are packages for toys, for example, the handcuffs.

JS: Are your parents Peruvian?

PC: My father was born in Peru, but his family comes from Russia and Italy. My mother’s family were Jews, but they were more into politics than Judaism. They moved to Detroit in 1936, before World War II.  My grandfather was the first Ford Motor Car representative in South America– in Brazil, in Panama, and in Paraguay.

JS: Wait, your grandfather was the first to bring Ford to South America?

PC: Yes, at age fourteen he heard that his uncle was doing really well in America. So, he got on a boat without telling anyone. He arrived in New York and the uncle was in Brazil. But he had no idea because he was a fourteen-year-old kid who wanted to be in America and didn’t realize that the uncle was in America, the continent, but in Brazil. In Detroit at that time, they needed Spanish speaking workers and he spoke Spanish, so he moved to Detroit and started in the assembly line of cars and ended up being the first representative in Latin America for Ford Motor Company– he was the first salesman. He knew everything about the engineering and the mechanics of the cars, so it was great for him. He became rich in Peru.

JS: So he just stayed there?

PC: Yes, he just stayed and then he died in 1968 when there was a military dictatorship revolution. He died because he couldn’t bear losing all his life’s work.

JS: They took everything?

PC: Yes, and they did the same here in Peru with all the land. The government took everything by military force. I was seven years old. This is when my grandfather died of sadness. That happened to a lot of people. They were very shocked with the loss of their life’s work. You Americans are so fortunate. Not everyone has those problems.