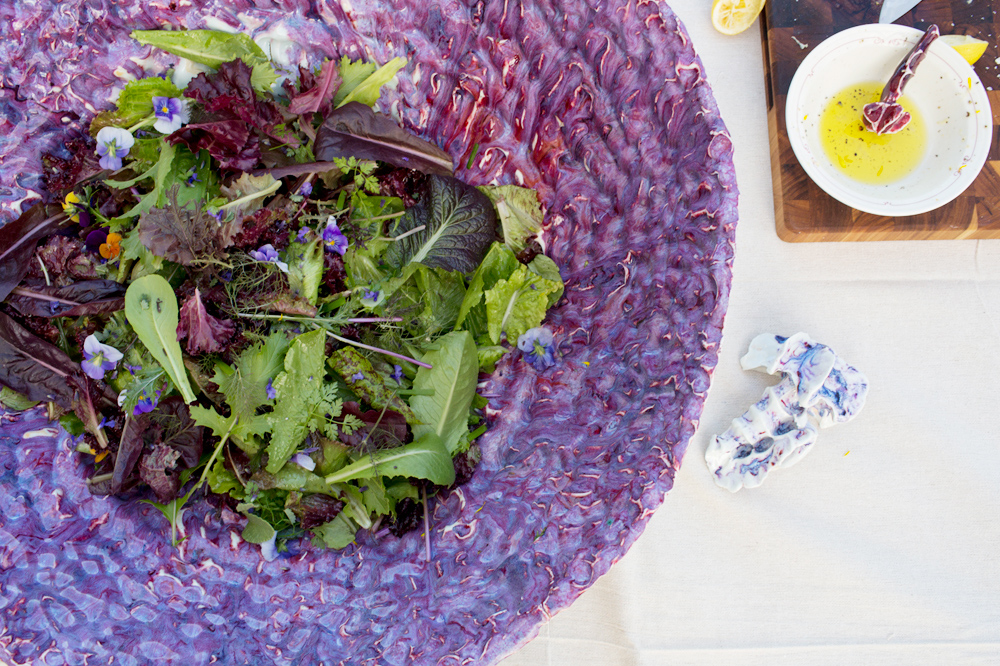 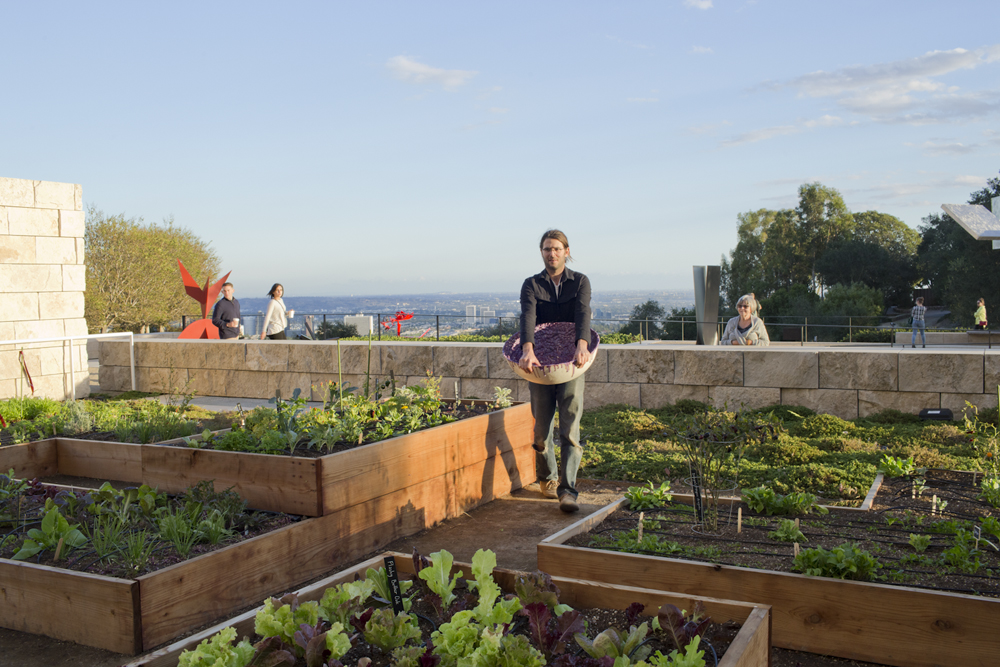 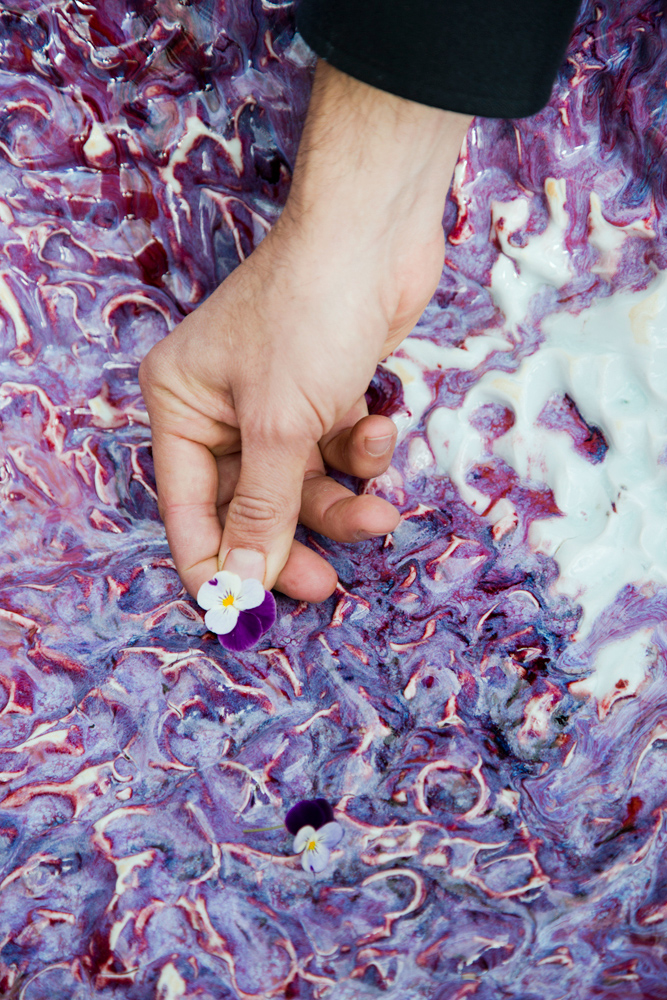 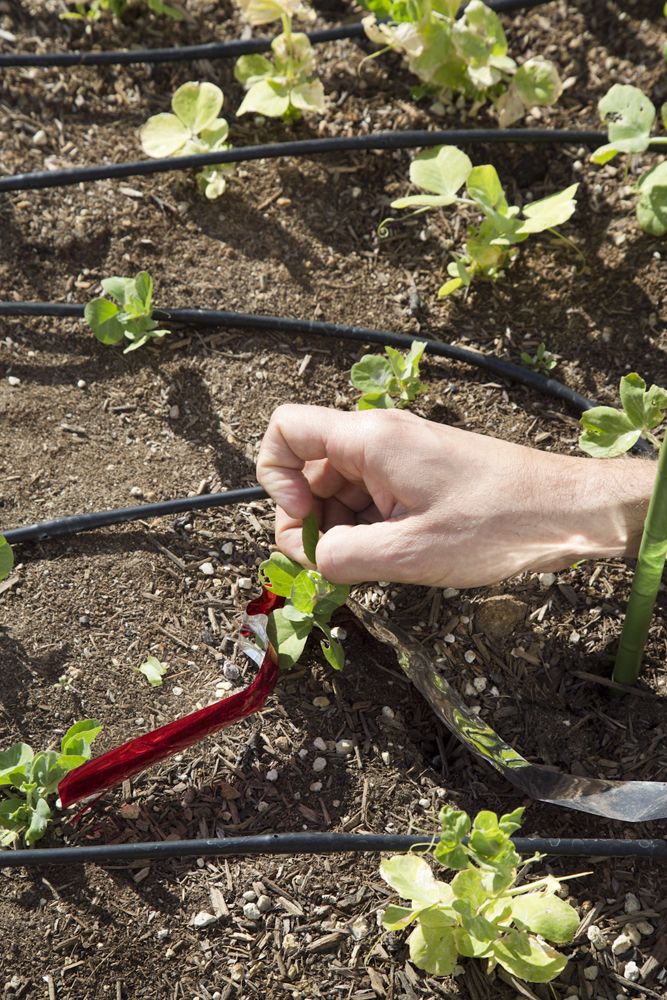 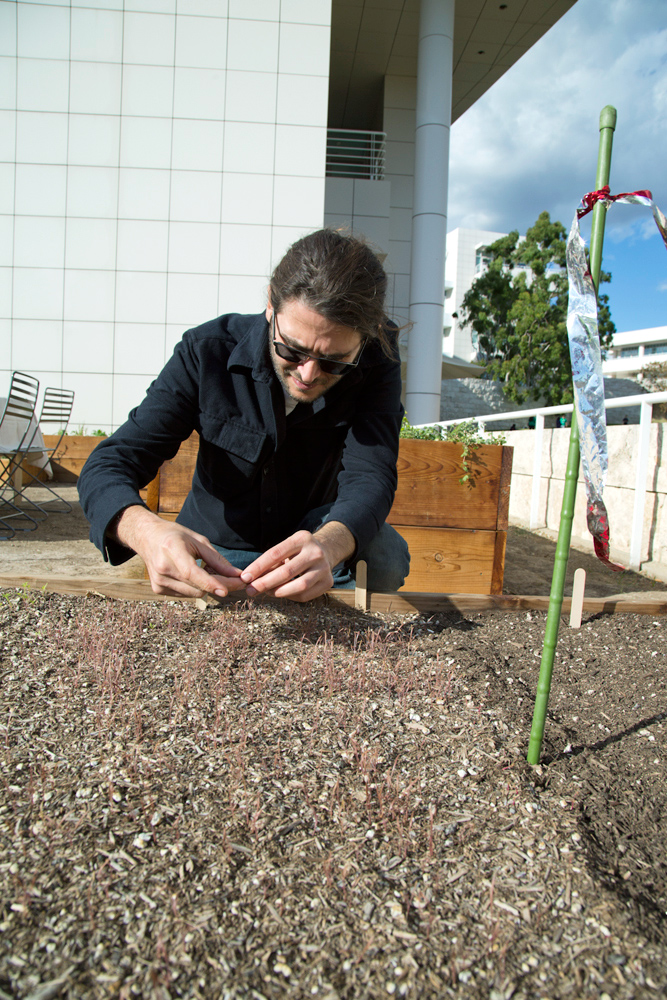 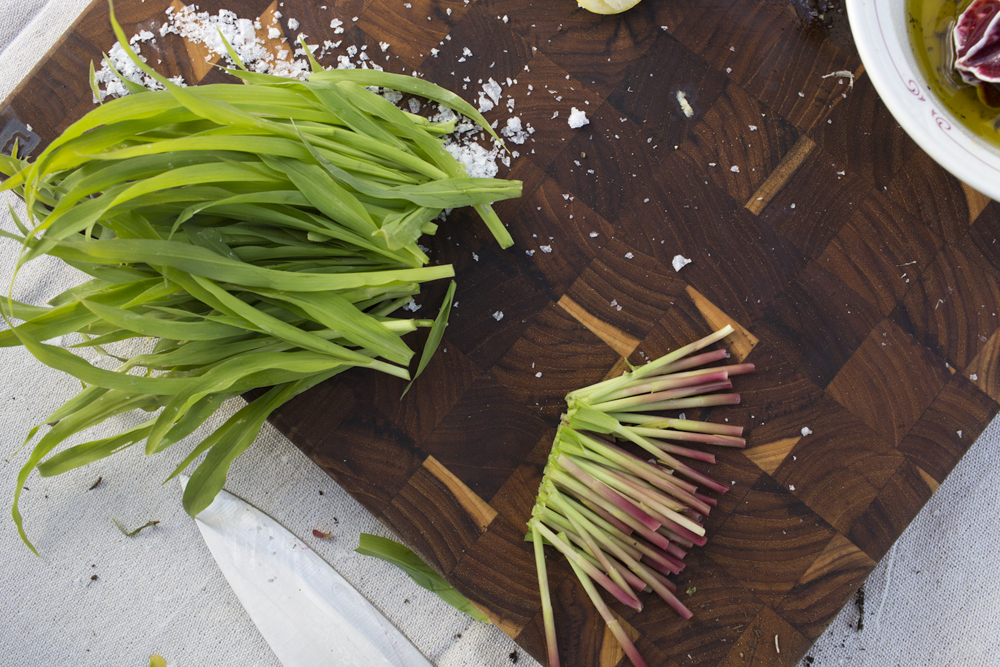 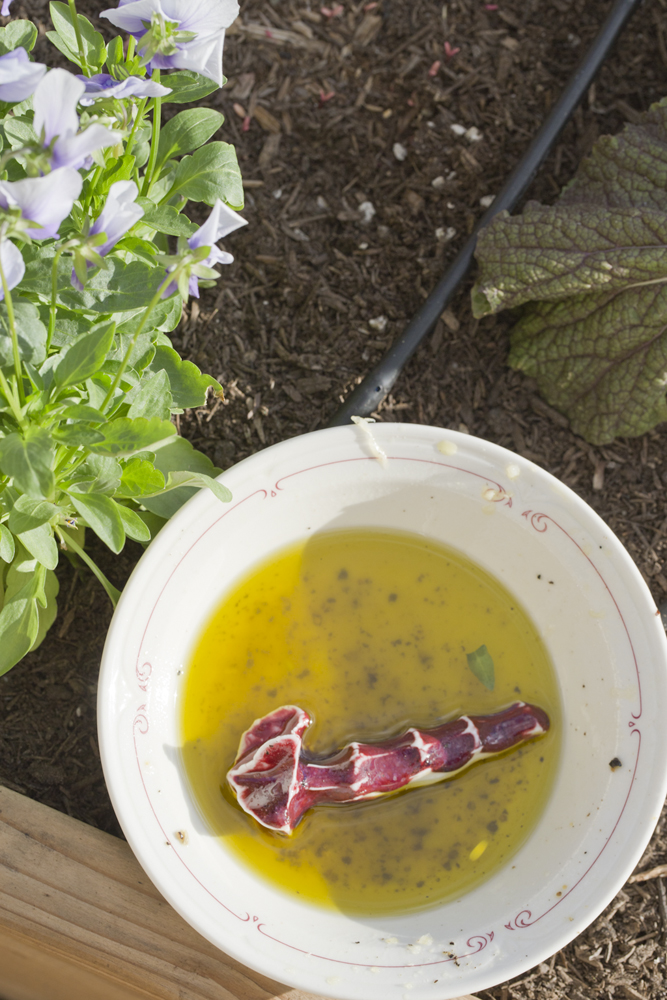 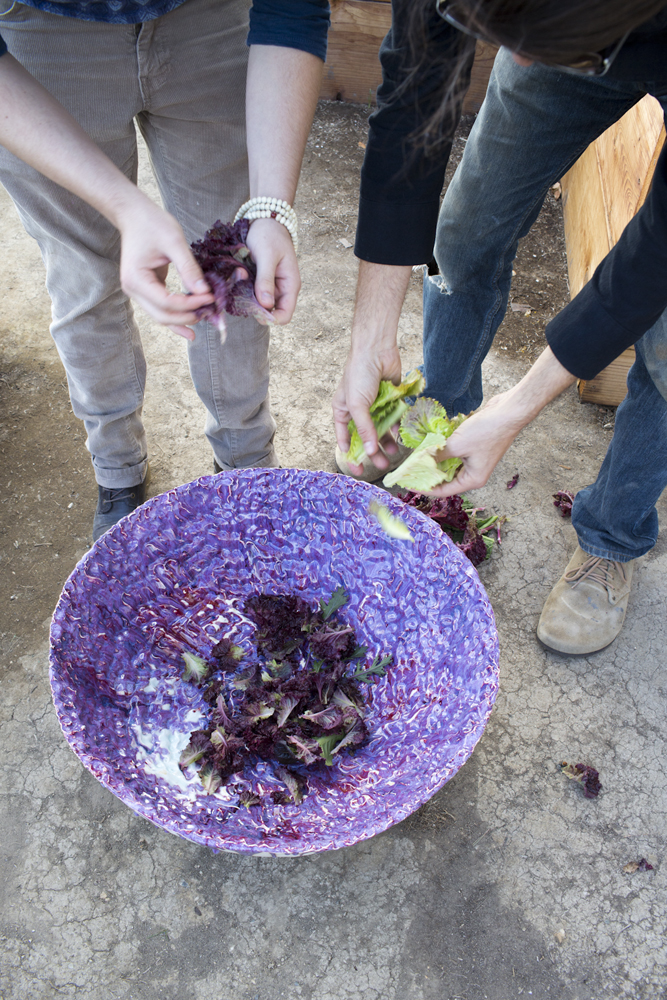 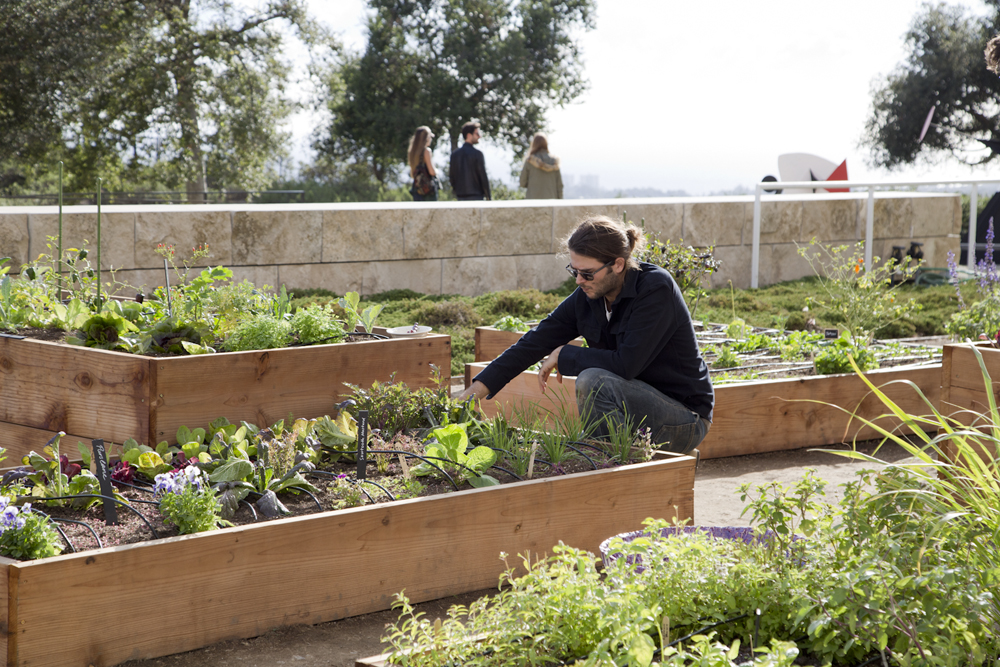 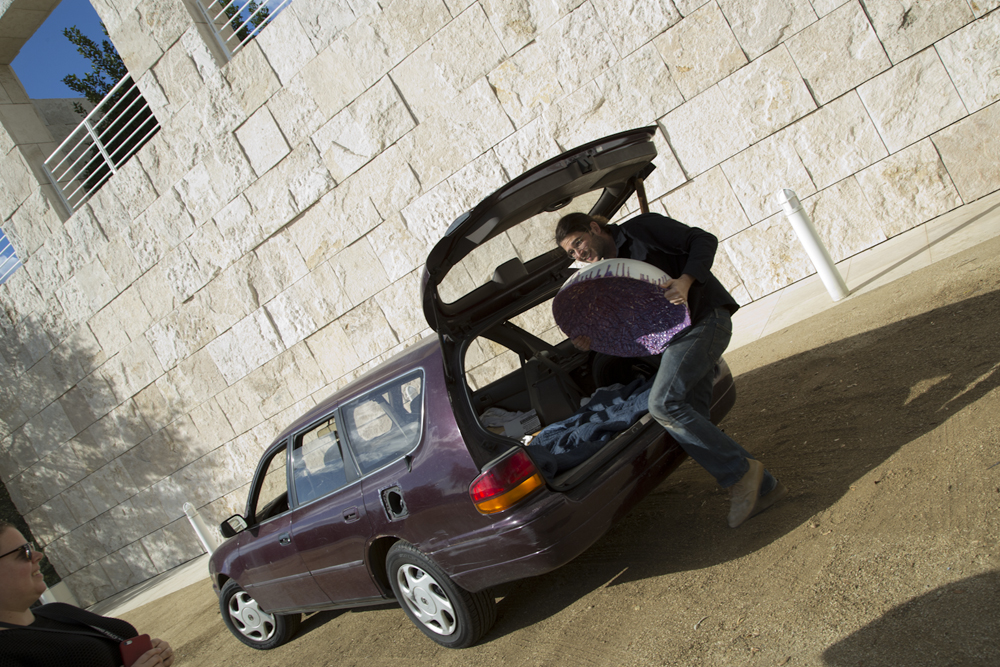 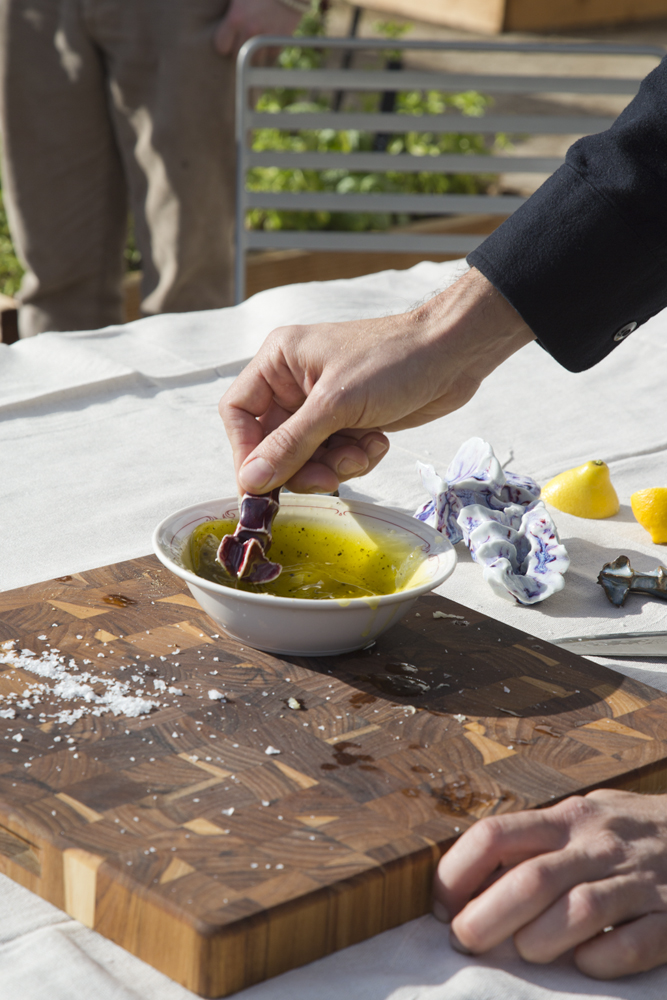 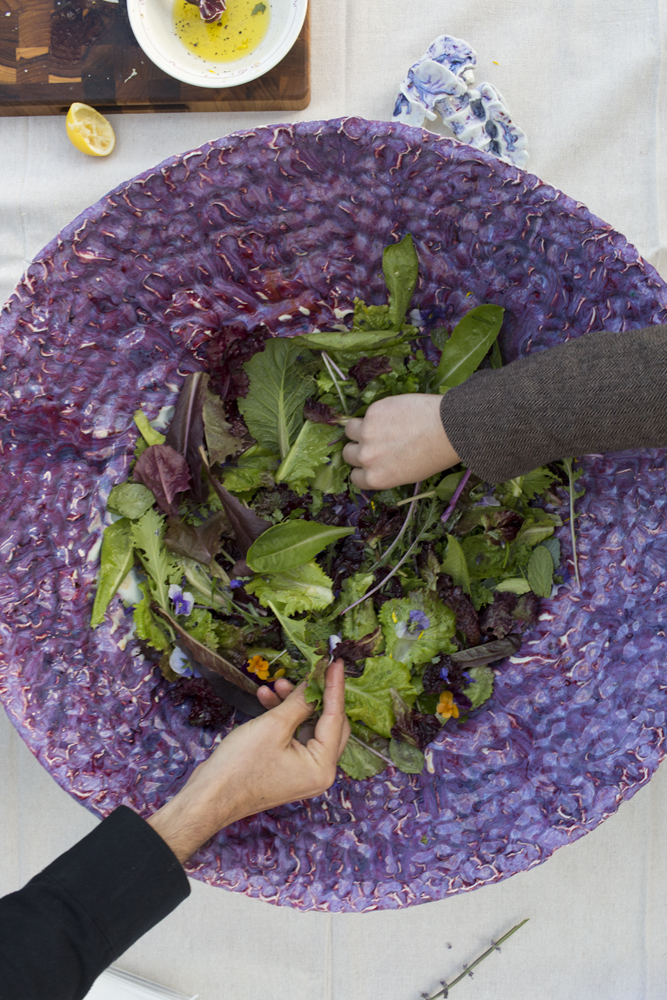 Although Michael’s salad was clearly more of a conceptual approach than a “recipe” per se, in the end we had something undeniably delicious — bitter greens with a sweet lemon vinaigrette.

Tear greens into bite-sized pieces and toss in a (gigantic) bowl.

Whisk together the ingredients for the dressing and toss with the greens just before serving. Season with sea salt and cracked black pepper and serve.

Tear greens into bite-sized pieces and toss in a (gigantic) bowl.

Whisk together the ingredients for the dressing and toss with the greens just before serving. Season with sea salt and cracked black pepper and serve.

Michael Parker is my favorite kind of artist – the kind who does not distinguish between “work” and play, who diligently follows his curiosities allowing them to sometimes result in an artwork, or maybe not. You get the sense that art is a bi-product of Michael’s unending study of people and communities that pique his interest. Michael wears the “hat of the public amateur,” as he goes so far as to immerse himself in trade school with power-lines technicians, or collaborate with the youngest of the three living Shakers in the U.S. in the name of art. And when he is not poking his nose in other people’s business, Michael somehow finds a way to reimagine his private hobbies for the public. Like when he built a mirrored, egg-shaped sauna in his loft, eventually transporting it into the gallery space where visitors were invited to strip down and take a schvitz.

I should have known that Michael would turn the invitation to “make a salad” into an exploration all his own, but I did not expect him to bring a 50 lb ceramic bowl, and insist we systematically taste EVERY SINGLE plant in the garden before we actually tossed together some semblance of a meal. What was even better was that Michael brought along a few artifacts from his recent performance, Juicework, a five-day installation, inviting visitors to juice citrus using hundreds of Michael’s handmade tools. The installation was lit by porcelain lamps, hand pressed from a mold of the ugliest watermelon Michael could find in the summer of 2014. So, in short, this was not the artist’s first foray into the world of salad inspired art.

To read an in-depth description of this laborious process, check out this article on NPR’s blog, The Salt.

Michael Parker in His Own Words

Julia Sherman: Tell me about the big bowl you brought with you to the museum. Did you make it yourself? Is this a work of art, or are you experimenting with home goods?

Michael Parker: This is the largest bowl-typology I’ve made so far, and yes, this purple thing is a sculpture. It is part of my ongoing Juicework project for which all the clay forms I make are squeezed, pressed, pulled, punched, pinched, coiled, raked, scraped with my own hands. Though it is very important to note that while making sculptures at this scale, a second, third or even 6th set of hands is often needed, particularly when anything is being moved. In this case, I just pulled this beast out of the kiln, and I figured, why not “exhibit” it at The Getty?

JS: What is with your fascination with ugly fruit? Where did it stem from and how has it made its way into your work/everyday life?

MP: Ugly fruit frequently tastes the best.  For example, if a bird picks a few bites into a peach, well, then, the bird just told me its ripe. So when Mud Creek has a pomegranate that’s split open with a moldy crack, well, its fully ripe… just avoid the mold. I have some hidden projects, but most recently I have been making cup-typology-sculptures from cherimoya and atemoya. I make molds and use a combination of pinch pot construction to make these odd shapes into handheld hydration stations.  Also, I made a mold from the ugliest watermelon last summer grown by my citrus farming buddies at Mud Creek.

JS: I think we have a similar way of using art as a way to meet unlikely people, or gain access to unfamiliar situations. Does that resonate for you?

MP: The artist can take on the “hat of public amateur,” a term coined by Claire Pentecost. Wearing that hat we can delve into worlds outside of our expertise. That idea resonates with many of my projects.

JS: Do you keep in touch with any of the pole yard dudes you met at the training course you attended to make that project?

MP: For sure. And the term is Lineman!

JS: You made a series of sculptures using preserved ugly fruit. There are two of your salted melon sculptures in our family collection. How did you make those? I have been dying to ask.

MP: The ones you have were made circa 2005 and came about as I tried to discover if a discreet object that changes during its lifespan could have the quality of both doodling circles and squares, and also contain the quality of a geologic earthwork. After consuming the inside of a melon, I would pack the hollowed rind with salt. Over the next months/years the salt finds the tiny pores of the evaporation-proof rind and extrudes these fine filament crystalline spiraling hairs. The globular surface of the former melon becomes a landscape.

JS: Your piece, The Steam Egg, was something you originally made in your home, and then it became an art piece, correct? Or was it always an art piece? Or does it not matter?

MP: The Steam Egg is a sculpture that is also a fully functioning sauna. It’s really tough to move. That’s why I made Steam Egg 2. This one is currently starting its second year of public and private residencies. It was operated for five months by the art majors of Pomona College, then it filled the Armory in Pasadena this summer for a show. It is currently in an artist couples’ plant-filled driveway.

JS: Now, your idea for your salad was to not make a salad at all. Was this a tiny protest, or just creative thinking?

MP: It was both a tiny protest and a curiosity of thought. The Getty Research Institute has amazing archives of foundational New Genres art practices, including works by many Fluxus artists. There is a poster by Alan Kaprow of brown paper balled up. When folded up, the ball is about the size of a fist.  As it unfolds the paper ball keeps doubling in scale. After a dozen or so unfolds the brown paper ball is huge.