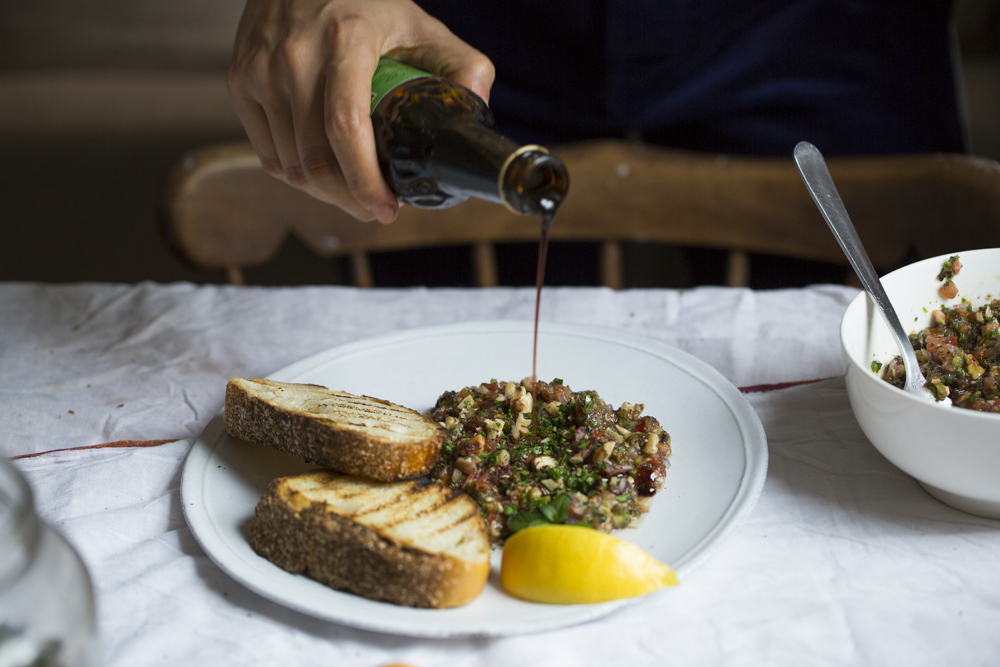 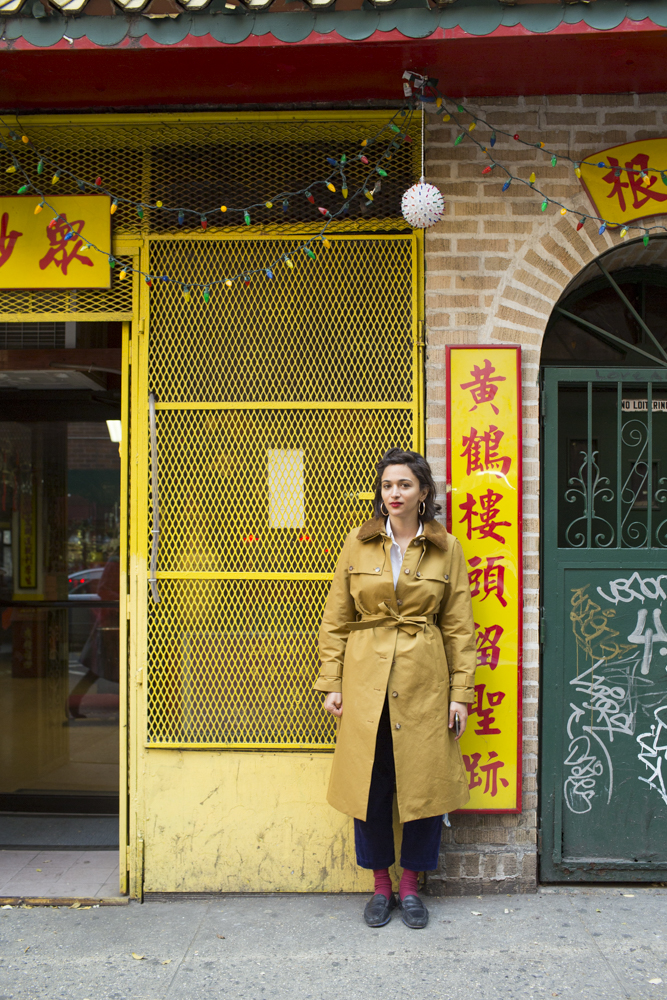 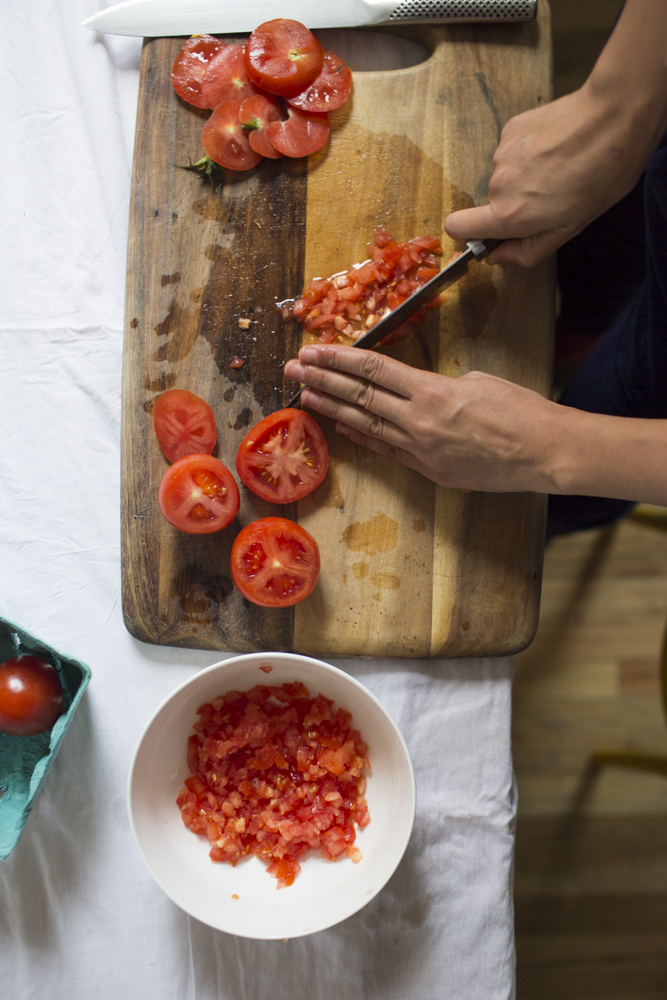 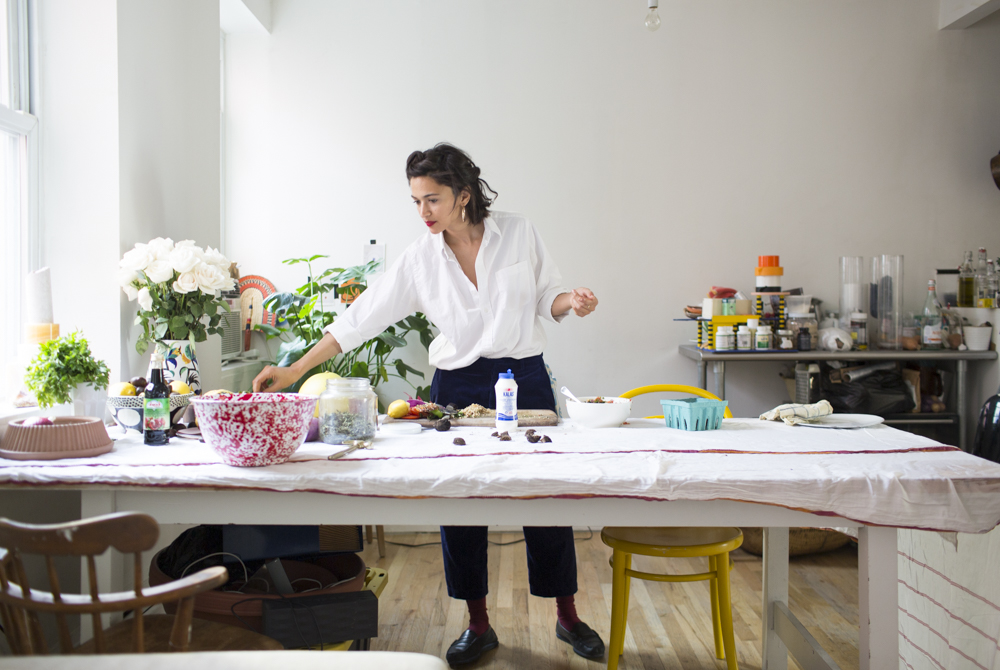 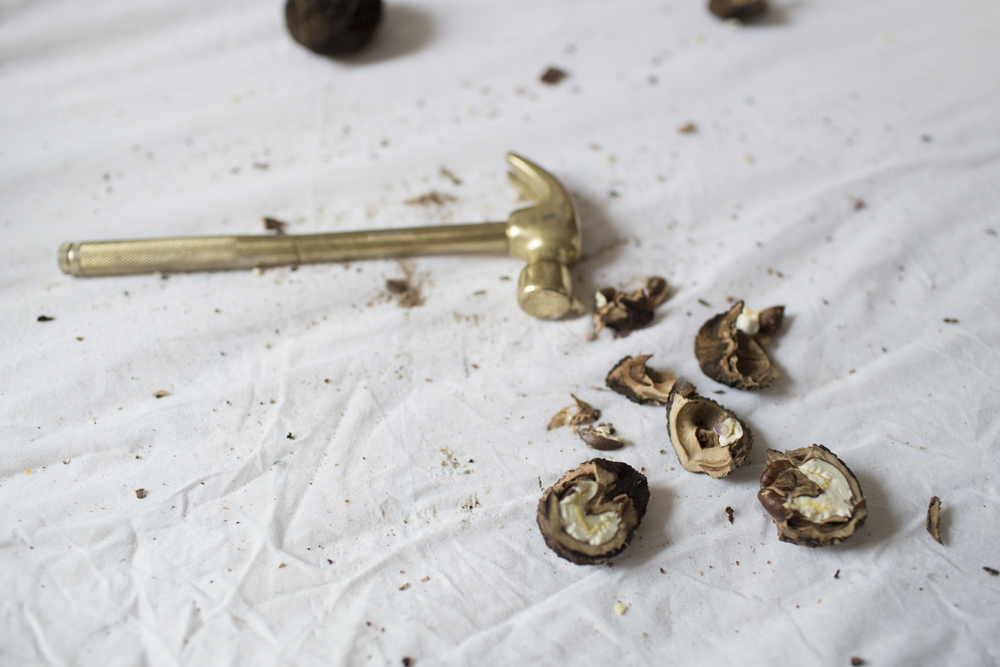 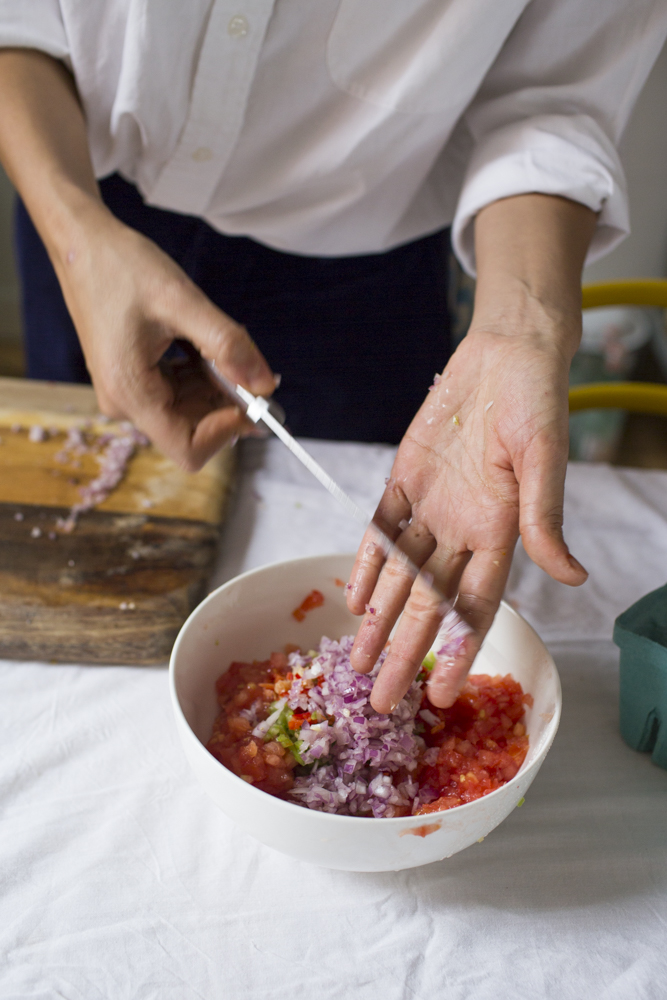 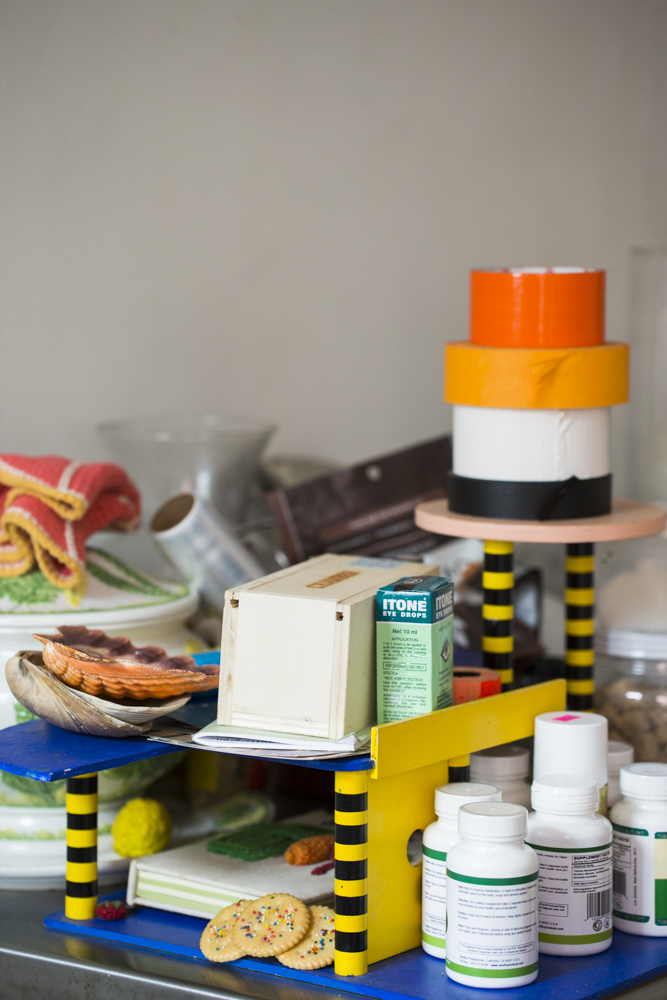 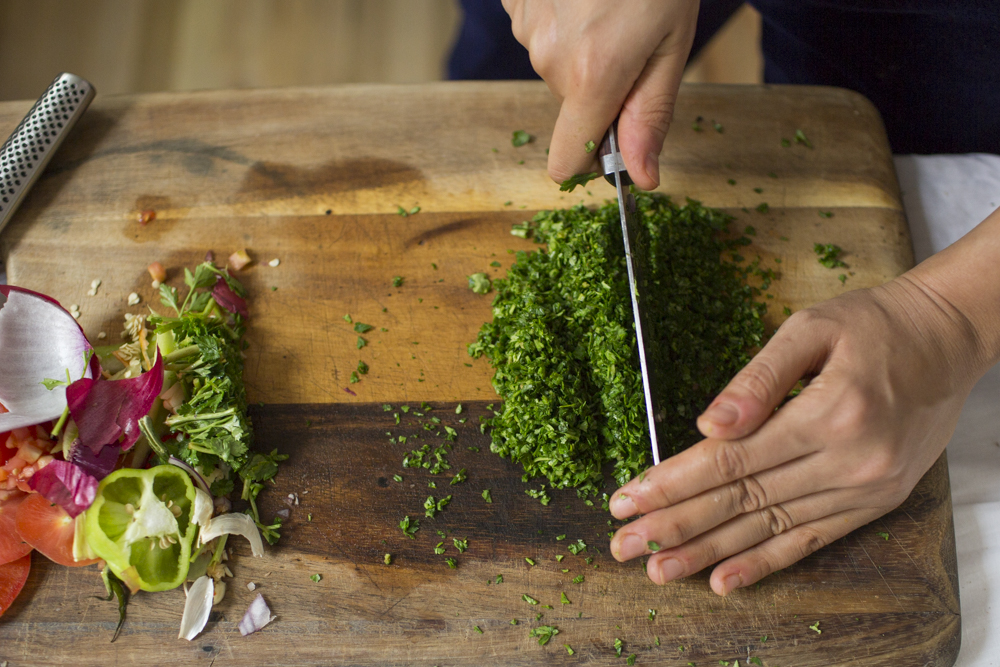 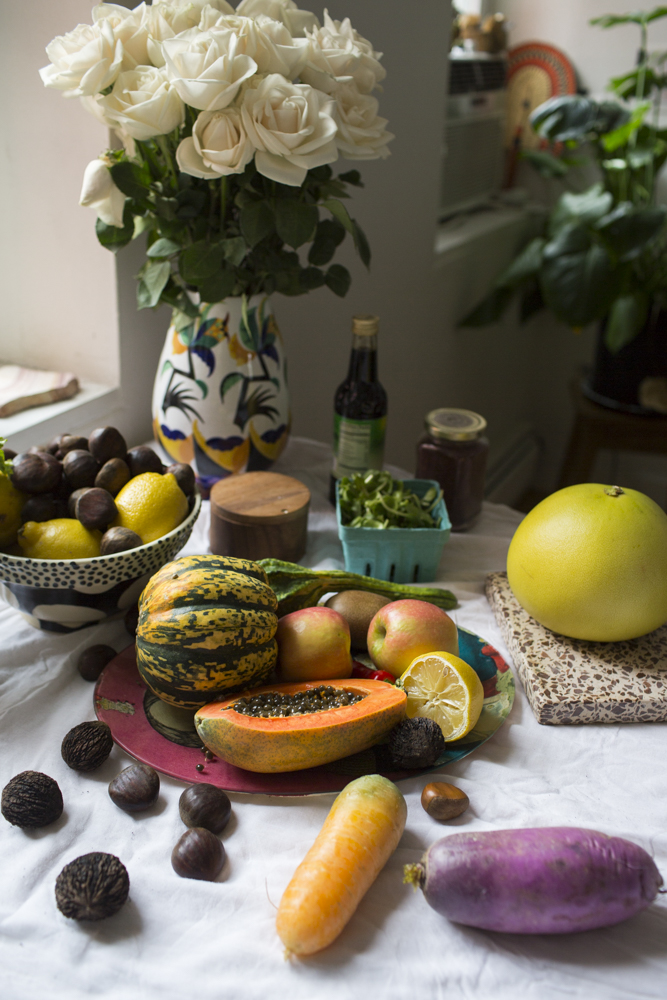 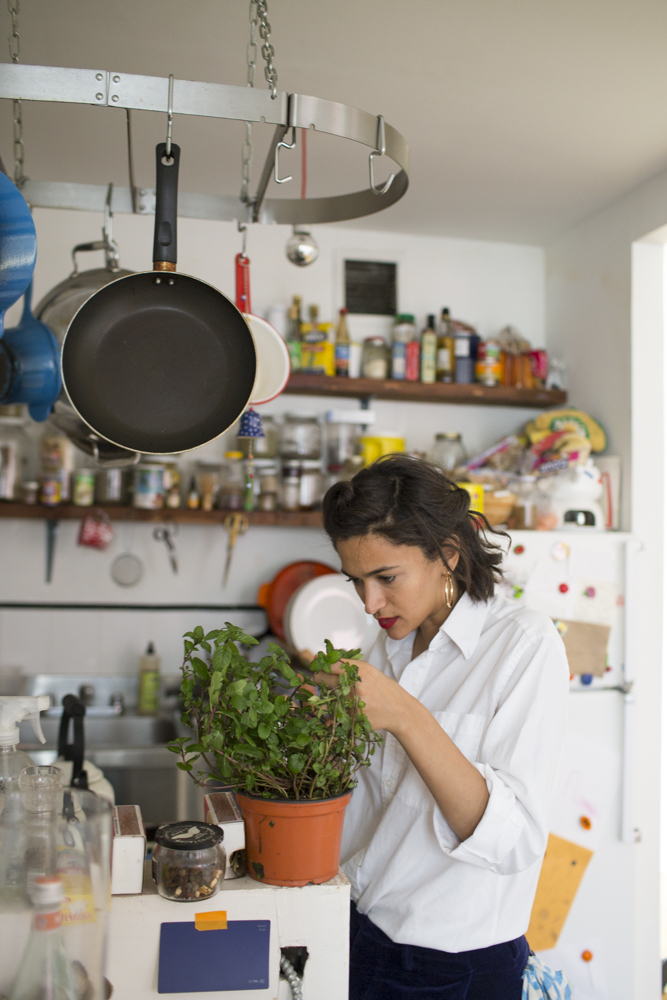 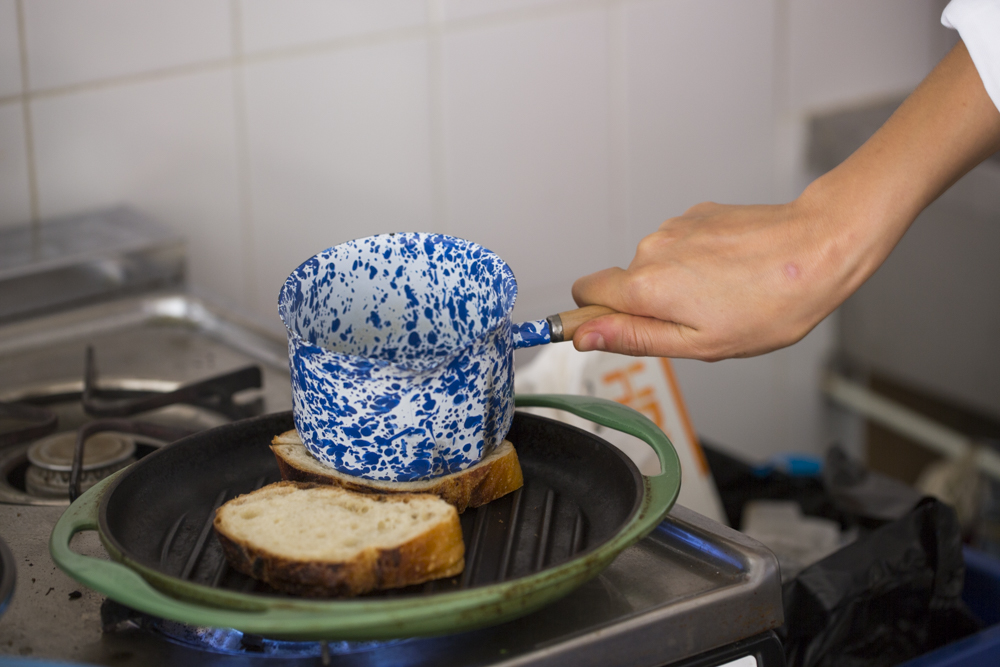 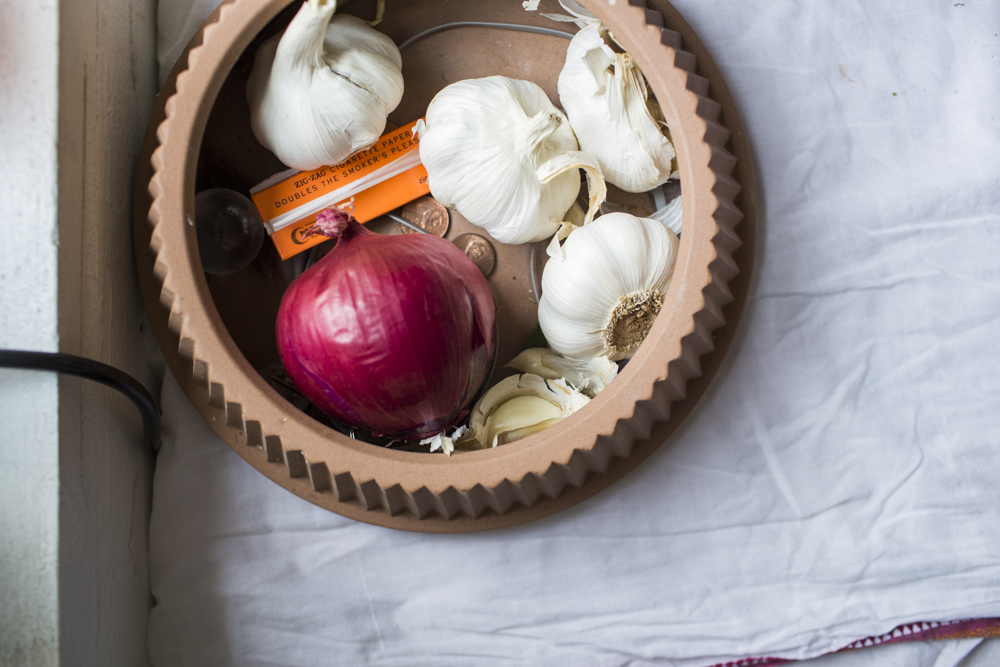 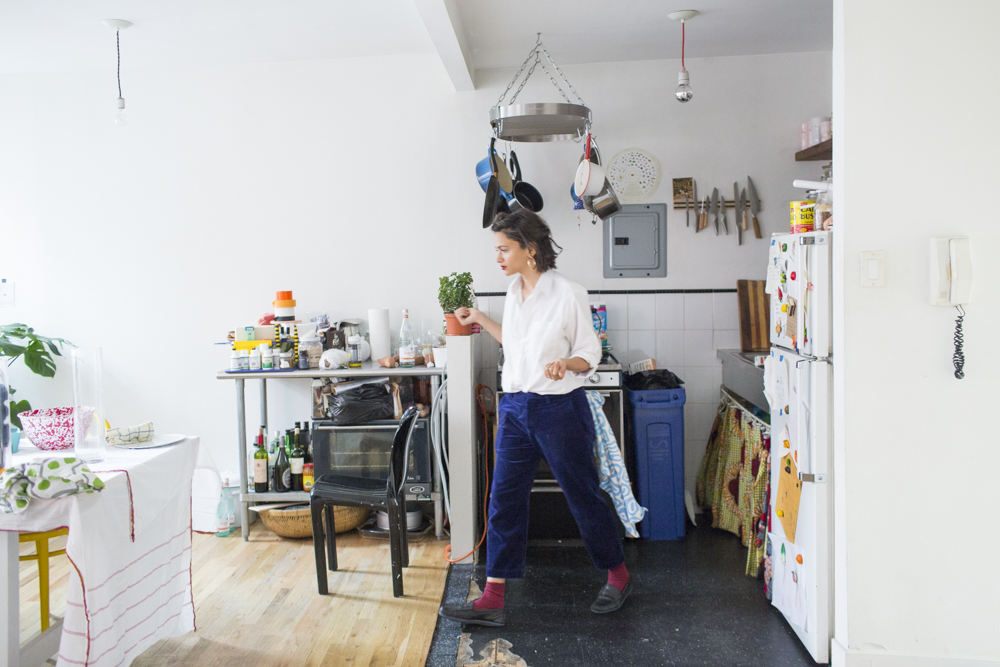 This is a common salad in Turkey, where Laila’s mother’s family comes from. It’s generally eaten as a mezze and served with tons of lavash bread to soak up all the runny tomato juices. The salad is sort of like a tangy salsa and is obviously best with ripe summer tomatoes. If you use black walnuts, try using a corn sheller rather than a hammer to crush them (we found this out later).

2. Whisk together lemon juice, pomegranate molasses, and olive oil. Add the dressing to the salad bowl and toss gently to coat. Season with chili flakes and salt to taste, and serve alongside toast.

2. Whisk together lemon juice, pomegranate molasses, and olive oil. Add the dressing to the salad bowl and toss gently to coat. Season with chili flakes and salt to taste, and serve alongside toast.

Laila Gohar is just my kind of cook — she makes approachable, fresh food but considers each meal an opportunity for an unexpected sensory experience. Whens she is catering fashion and art events the food is always presented as an fantastical installation. For Tiffany’s she created a giant ball of cotton candy, for designer Jason Wu a sculptural tablescape of bread, served alongside a paint-your-own entrée for guests. A palette replaced the plate and paintbrushes were used to apply sauces to colorful food. Laila brings aesthetics and playfulness to the table.

Born to an Egyptian father and a Turkish mother, when Laila cooks at her Nolita home, she makes the most approachable, bright and healthy food that speaks to her roots. It involves lots of olive oil and fresh vegetables, and like this salad, it is healthy and generous.

Laila Gohar In Her Own Words

Julia Sherman: Tell me a bit about where you are from and how you grew up?

Laila Gohar: I’m from Cairo, Egypt. I grew up there. My dad was the cook of the family. My mom mostly cooked out of necessity (so it wasn’t that good…) My dad was really exploratory in the kitchen. He would make stuff that everyone else in my family thought was weird, like fish pâté with some sort of strawberry reduction. No one ever wanted to try it except for me.

JS: How did his cooking influence your own approach?

LG: My dad loves saying that he doesn’t have any recipes and has never cooked the same thing twice. Aside from the weird shit, we ate a very typical Mediterranean diet — lots of vegetables swimming in olive oil, grains, fish, and sometimes meat, but not so often. I still eat the same way. Bread was, and still is, my favorite food.

JS: So culinary experimentation is somewhat of a Gohar tradition?

LG: Oh yes. When I was really young I would cook for my sister really late on the weekends. I was the cook and she was the clean-up crew. Not a lot has changed. We’d plan these elaborate 3 course meals at 1 AM, but they were a kid’s version of “elaborate,” not at all high-end. Courses would include things like deep-fried chicken teriyaki, but since soy sauce was scarce in Egypt (we couldn’t get it till some years later) I’d have to invent my own version of what I thought the flavor profile of soy sauce would be. The only sesame seeds I knew were in the middle eastern spice za’atar, so chicken teriyaki became chicken za’atar teriyaki. Ha!

JS: Together, we recently tried to explain the difference between a “chef” and a “cook” to a friend. Can you explain how you think about your own job title? (I assume, like me, you end up doing a lot of explaining when people ask what you do).

LG: I feel it would be arrogant to refer to myself as a chef. I refer to friends that own restaurants as chefs, or people that are chefs at restaurants. I’m a cook.

JS: Have you ever experimented with other media? Do you consider what you do “food as art?”

LG: Food has always been my medium. I like that it is practical. I have a hard time when people suggest that food is art; it sounds a little pretentious to me. I totally respect other people’s opinions on the matter, but I can’t say it doesn’t make me roll my eyes. Because of that I have a hard time defining the work that I do.

JS: What are some of the challenges you have encountered in trying to make unusual food experiences?

LG: There are always challenges. I recently designed a hot dog dispensing machine at Opening Ceremony. I was making the 200 hot dogs myself, so I didn’t have time to test out the machine with the exact dogs we would be serving. Once the event started, the hot dogs flew all over the place because they were slightly too big for the machines. And since the dogs weren’t uniform in shape and size, they were stuck in the packages we were using to serve them. I freaked out for the first 10 minutes, and then I just pretended it was all intentional. Ha!

JS: It would be irresponsible for me NOT to ask about the baby lamb your fostered, who soon became an internet sensation. Can you tell me how that happened?

LG: Sheep will kick out the smallest, weakest animals of their litter as a form of survival of the fittest. Mary, the farmer at Violet Hill farm in West Winfield, NY, takes the runts in because so they aren’t left out to die. But she has a lot on her plate and the babies have to be fed every 5 hours. I agreed to foster a baby lamb and ended up keeping it 6 weeks as my boyfriend became really attached.  Once they’re a month old they can be reintroduced to the farm and survive, so Ziki returned to the farm.

JS: What are some of the particular challenges of keeping a barnyard animal in your home?

LG: It was fairly easy. Ziki, that’s what we named baby girl, was well-behaved. She pooped in a diaper, and her poop was little pellets, so it wasn’t that bad. The only annoying thing was she attracted too much attention in the street so I had to carry her around inside a tote so people didn’t really see her. I didn’t take her on walks or anything. That would’ve been suicide.