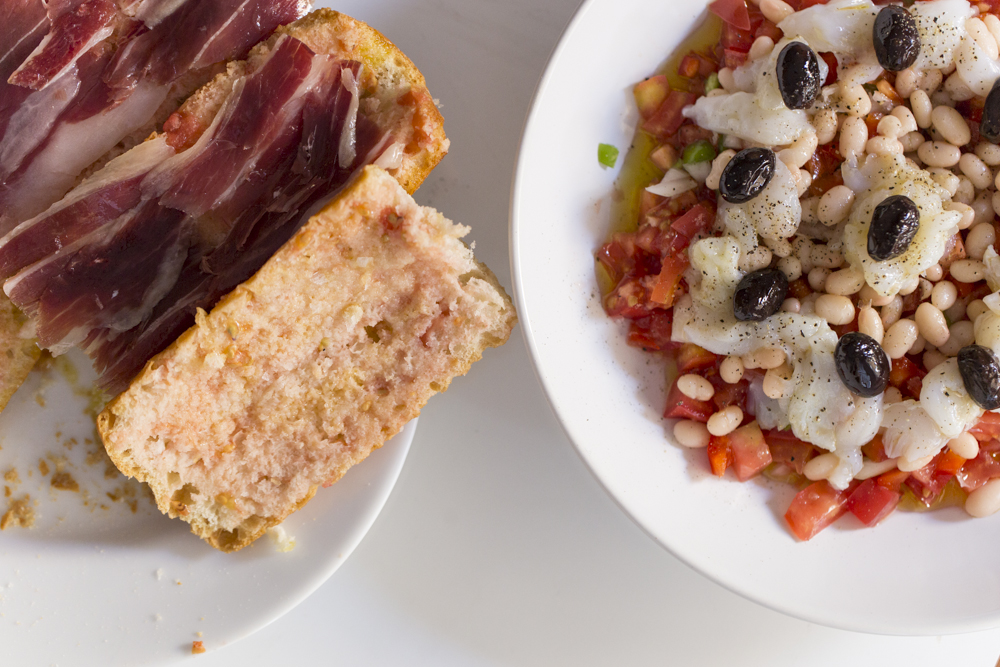 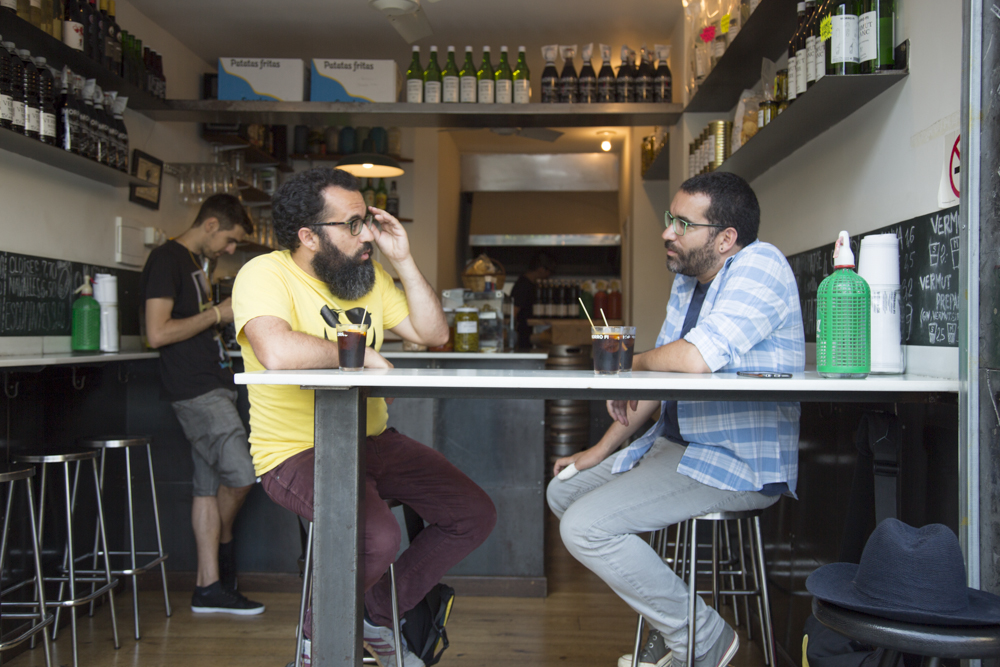 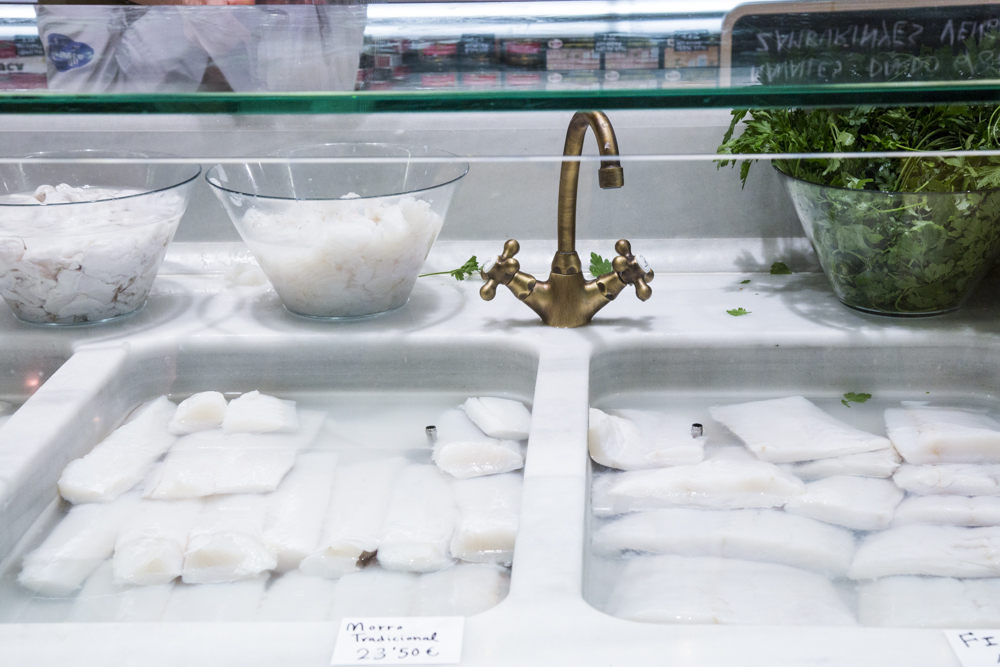 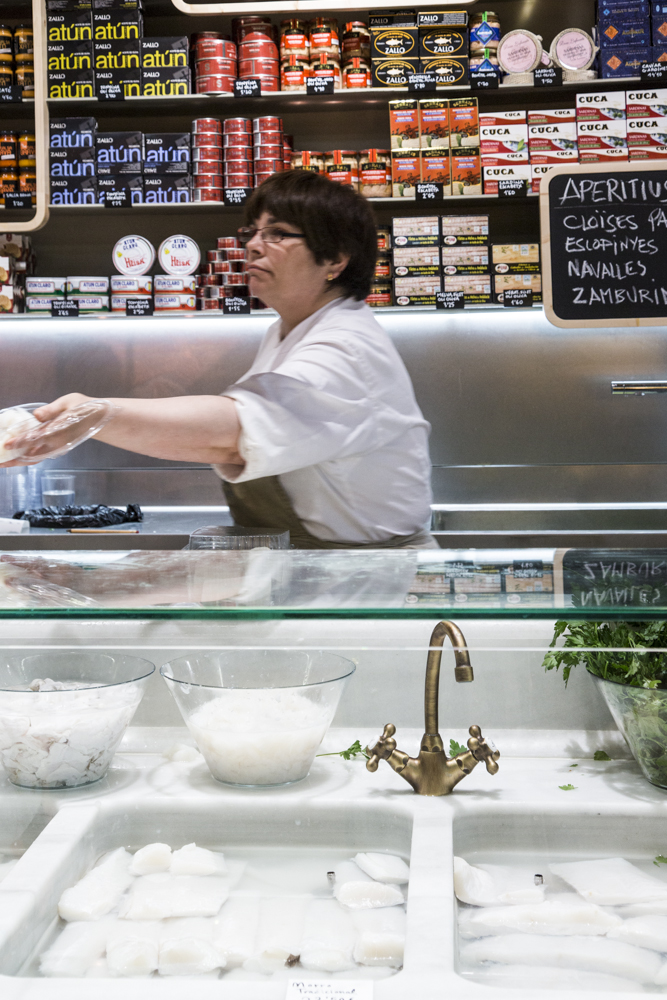 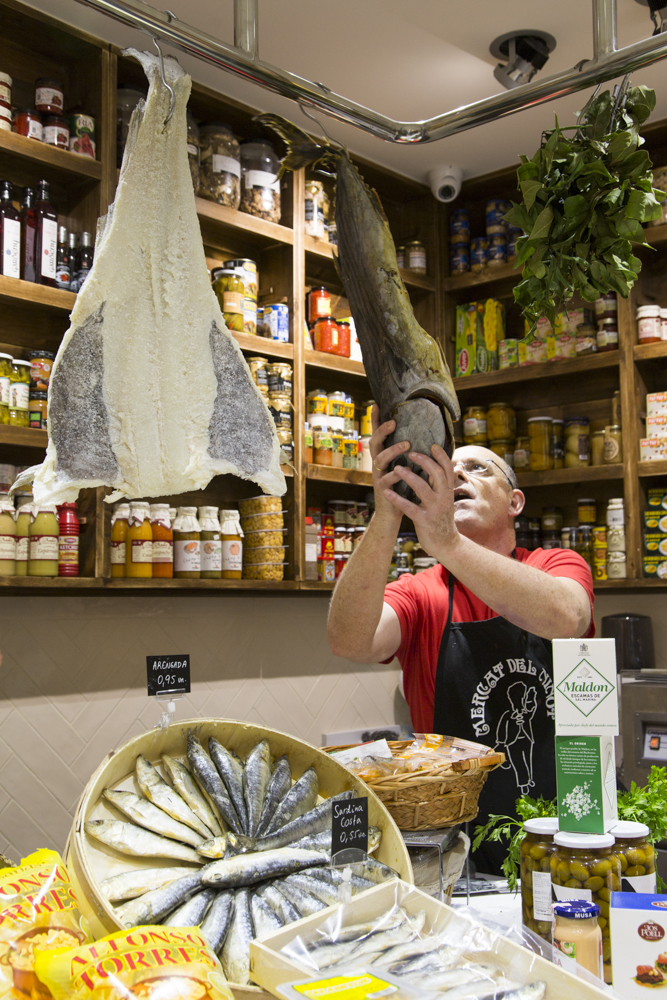 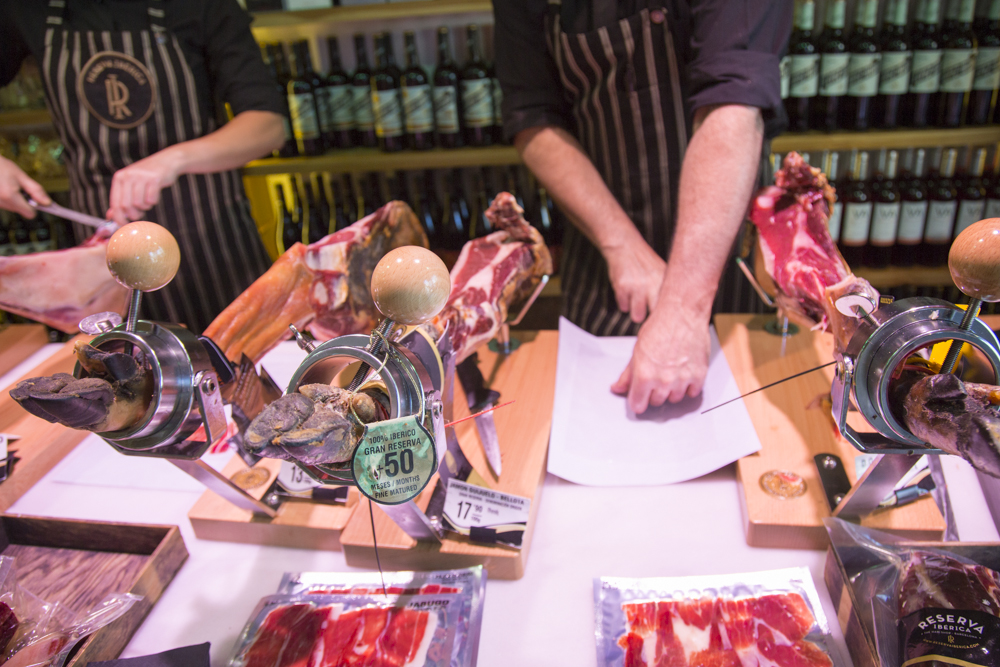 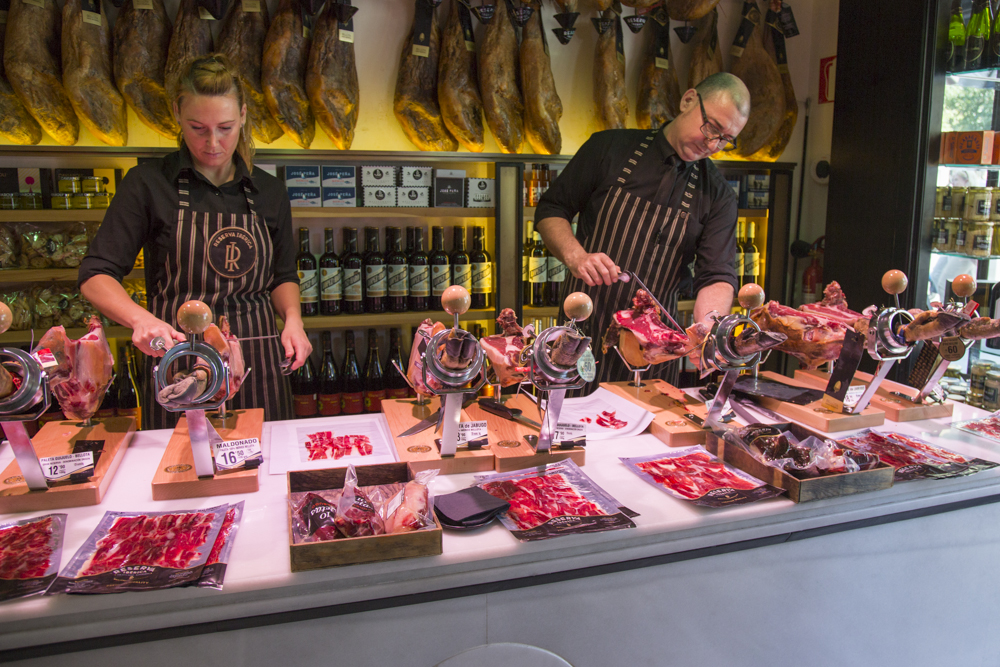 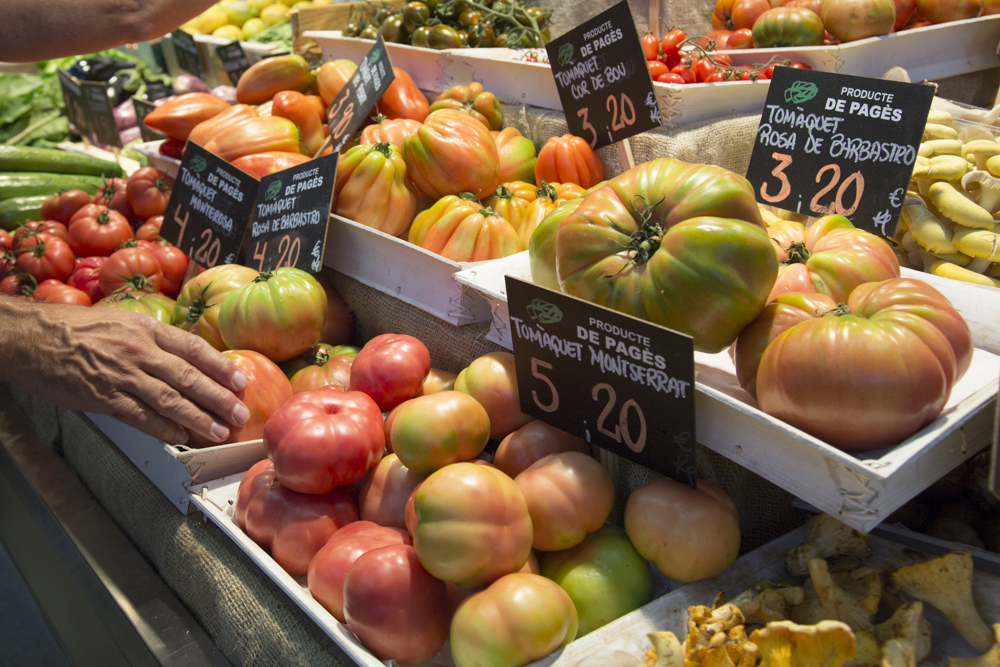 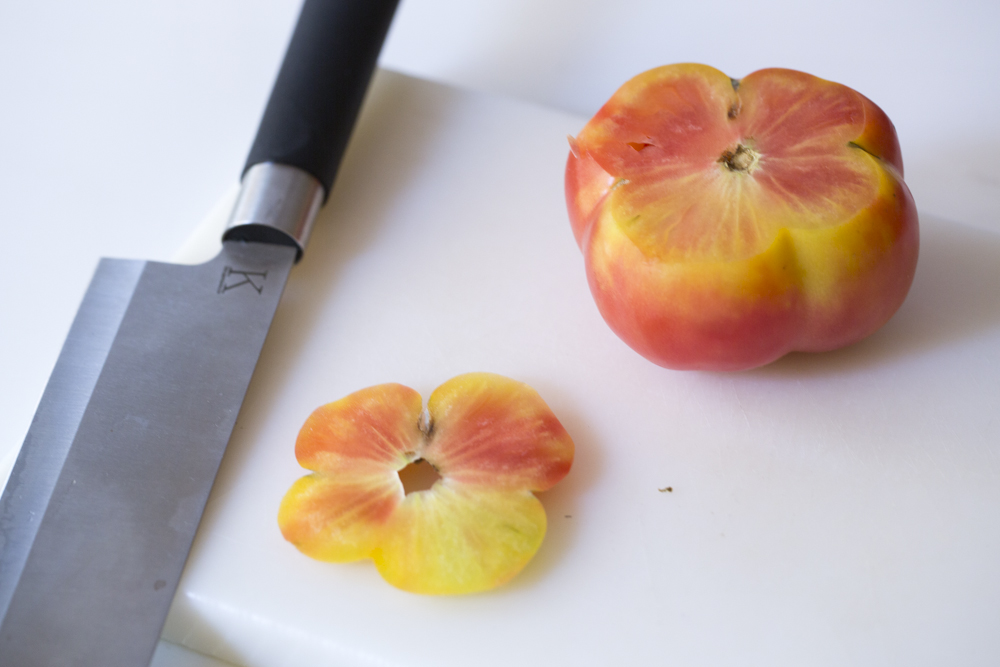 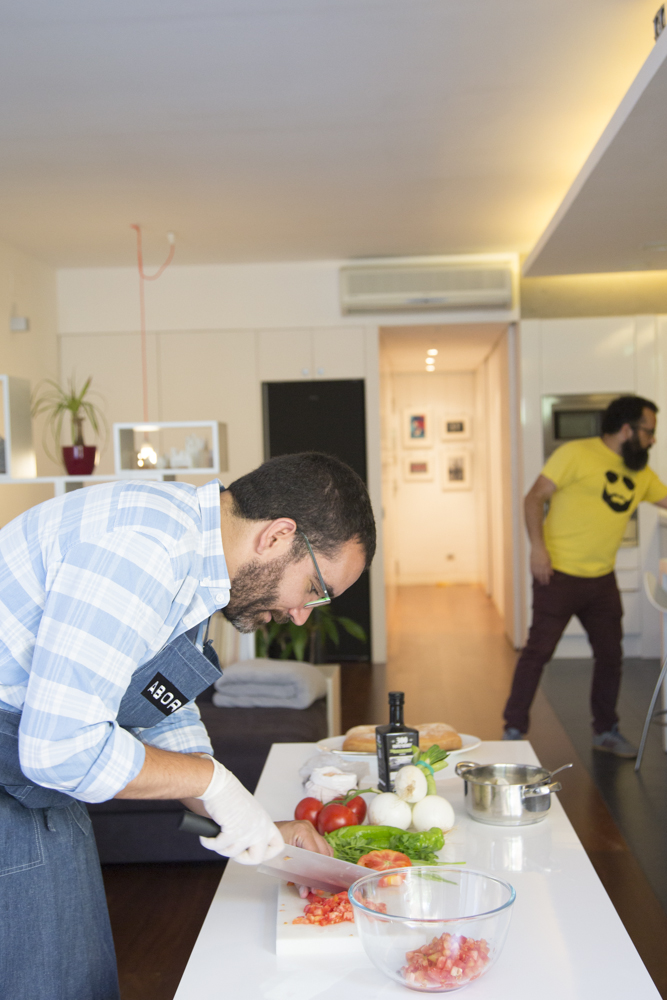 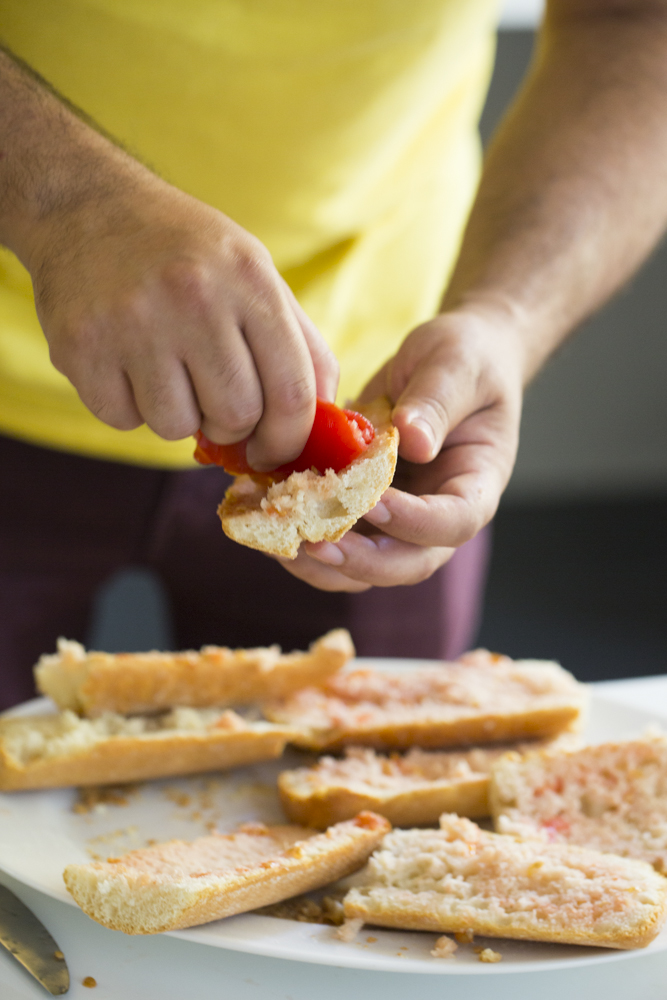 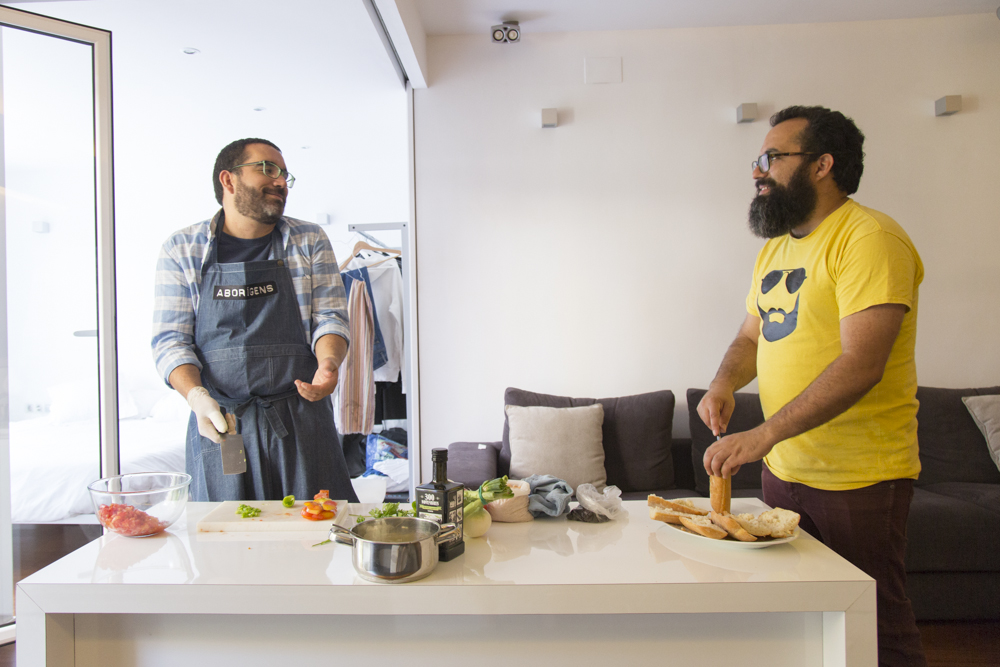 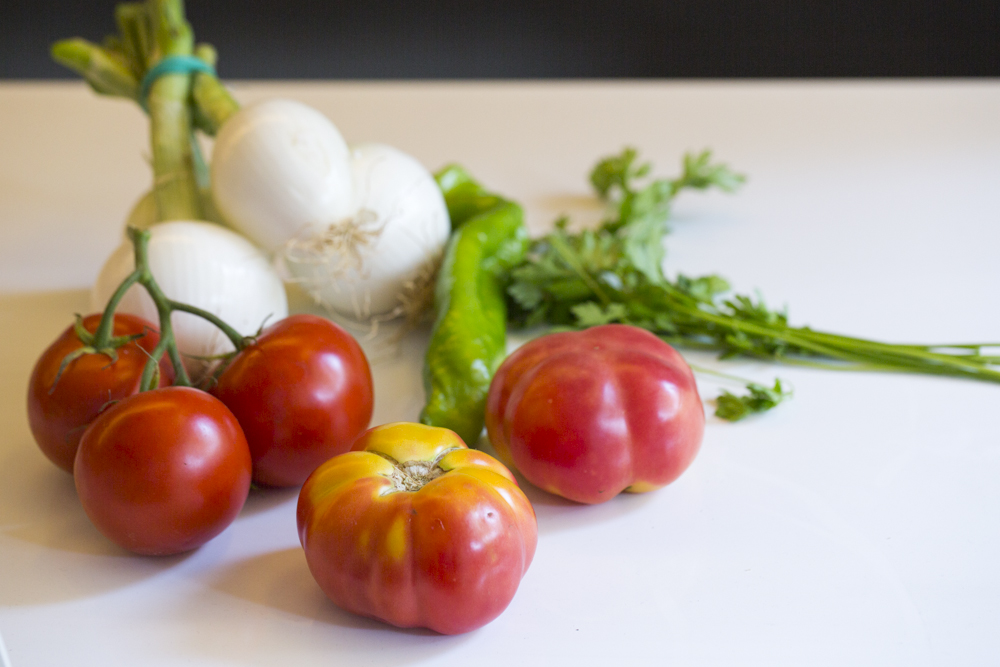 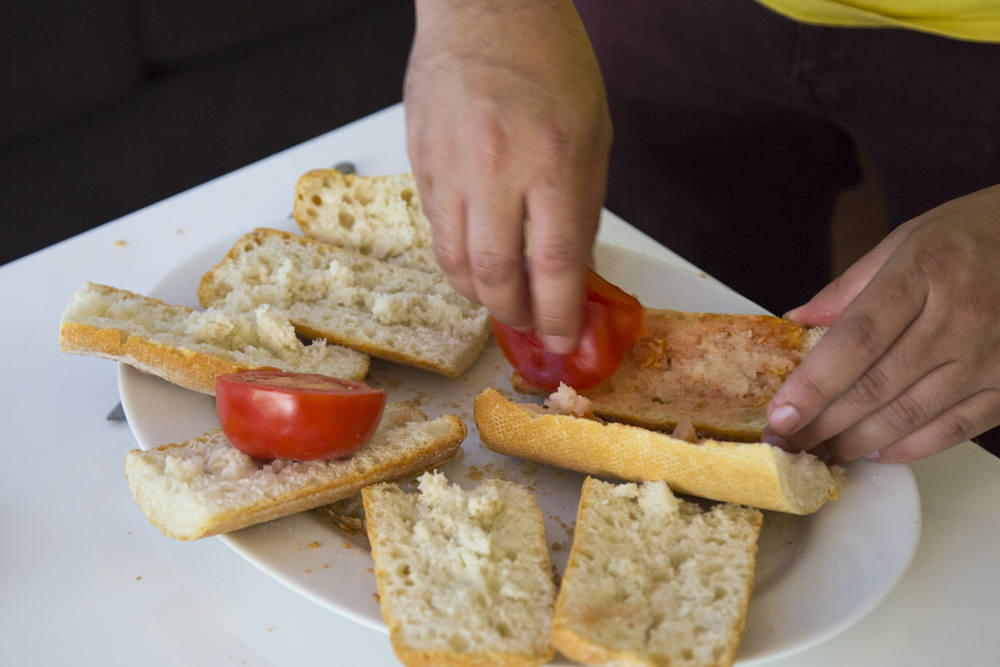 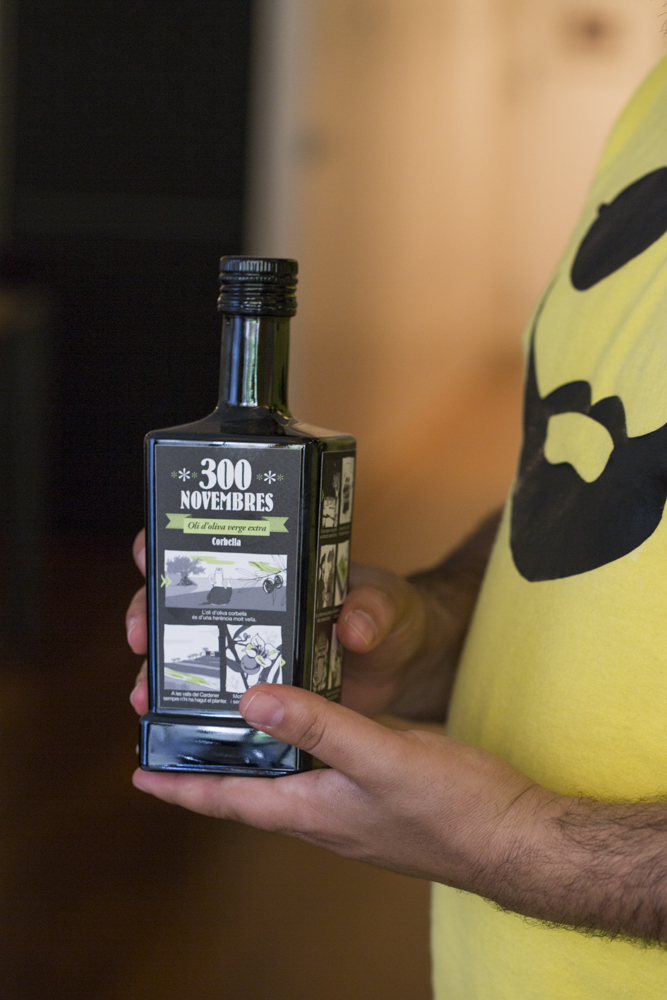 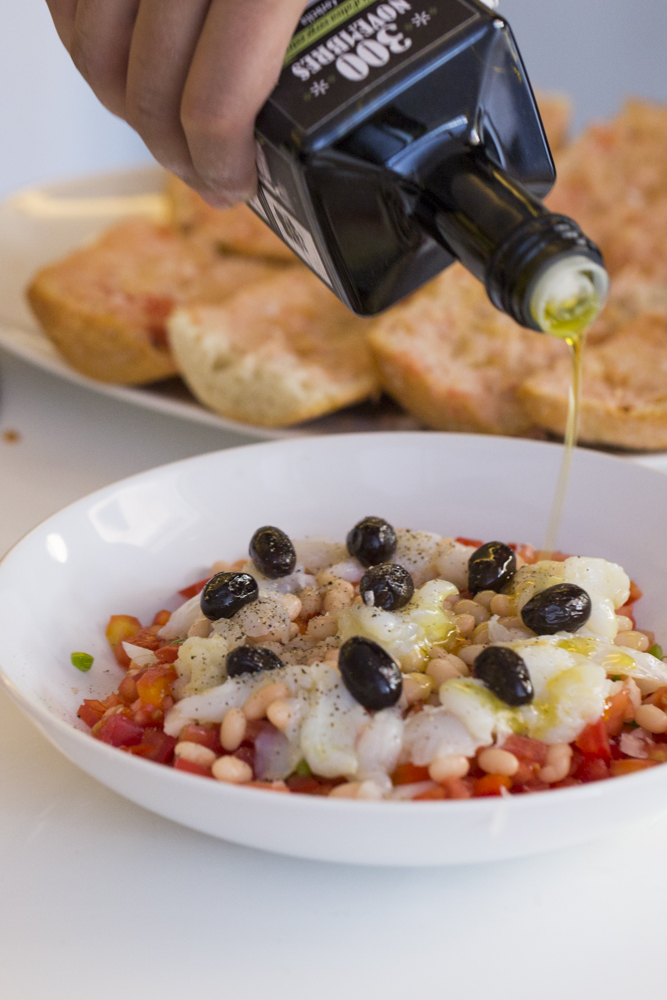 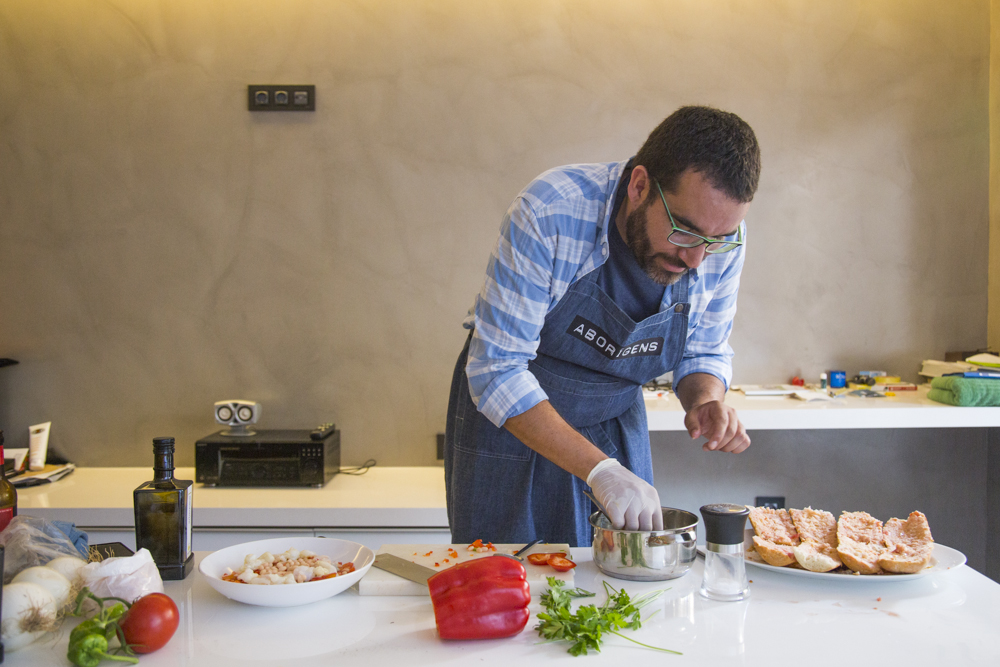 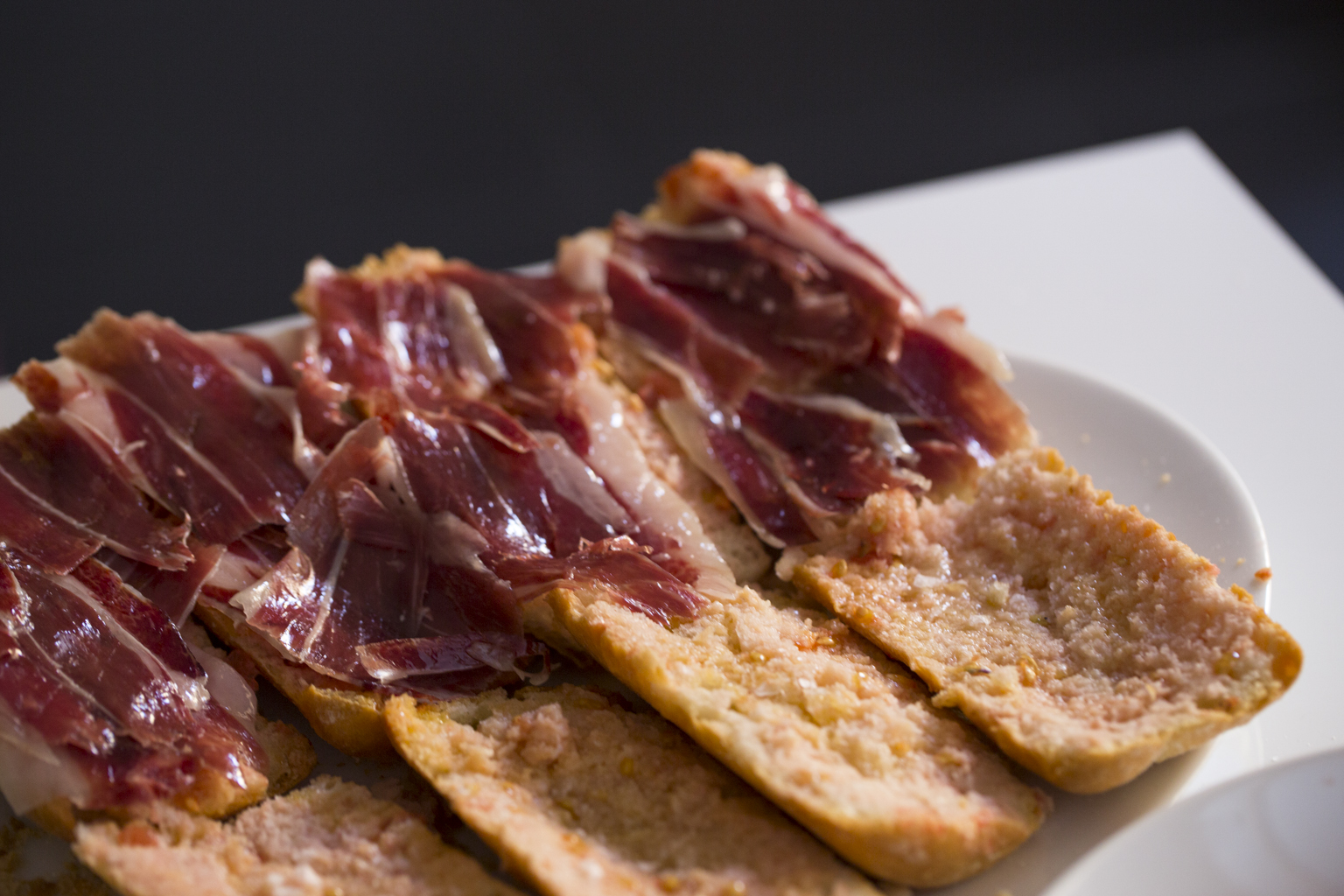 Salt cod can be found in tall stacks at your fish monger, Whole Foods, or any West Indian market. The stuff is preserved and can last forever, but re-hydrating takes time. In Spain, you can find it already soaked and desalinated, but in the U.S. you have to do it yourself. Start this recipe 24 hours ahead of time. Or, just make that Pa amb tomàquet (bread with tomato in Catalan) and call it a day.

Shred the cod by hand into small irregular pieces. Dry it on a paper towel and set aside. Dice the tomatoes into 1″ pieces and mince your onion and green pepper.

Place the beans, tomatoes and onion in a large shallow bowl, add the cod and the olives, season with salt and pepper and add plenty of extra virgin olive oil.

For the bread, slice your in half lengthwise. Slice the end off of a clove of garlic and rub over the entire surface of the bread. Cut a tomato in half, and rub on the bread as well, until the whole thing is red in color and saturated with tomato essence. Season with flaky sea salt and drizzle with a generous amount of extra virgin olive oil.

Shred the cod by hand into small irregular pieces. Dry it on a paper towel and set aside. Dice the tomatoes into 1″ pieces and mince your onion and green pepper.

Place the beans, tomatoes and onion in a large shallow bowl, add the cod and the olives, season with salt and pepper and add plenty of extra virgin olive oil.

For the bread, slice your in half lengthwise. Slice the end off of a clove of garlic and rub over the entire surface of the bread. Cut a tomato in half, and rub on the bread as well, until the whole thing is red in color and saturated with tomato essence. Season with flaky sea salt and drizzle with a generous amount of extra virgin olive oil.

It is all too easy to travel to another country, enjoy the food in the markets or restaurants, and only scratch the surface. Francesco Castro reminds us that if you think a meal begins and ends on a plate, your are missing the point. Francesco is one half of the company Aborigens, fixers and culinary ambassadors of Catelonian food and culture.

I met Francesco and his brother Daniel in the Ninot Market, where we shopped for the highly regional ingredients for his salt cod salad and tomato bread (with jamon of course), and I had the unique pleasure of firing-off all of my burning questions (I tend to have many) as we walked the aisles of canned seafood, produce, cheese mongers and butchers.  Francesco had answers for everything; it was astounding. He is a political journalist by trade, but he now spends his time crafting highly individualized food tours for famous chefs, writers and television crews looking to dive deep into the complexity of the Catalonia, in the kitchen and beyond. For him, this mission is personal — he wants to preserve the distinct language, food and identity of his people, reminding us that Catalonia is its own nation within Spain.

Francesco in His Own Words

Julia Sherman: You are Catalonian. This is  silly and reductive question, but in your mind, how does the cuisine of your region different from that of Spain?

Francesco Castro: Well, we have a different language, legal system, traditions and history…

Our cuisine is different from the Spanish (in fact: Does Spain have a single cuisine?) and has been built, as our identity has, over the centuries through the influence of other cultures: the Greeks, Romans, Arabs, Jews, with a strong influence from the cuisine of Occitania. Then, of course, we have the influence of the New World (tomatoes, peppers, beans, chocolate…)

Our cuisine comes from the Catalan lands, their common traditions and our 4 main sauces: sofregit, samfaina, picada and allioli. These are present in almost all of our recipes.

JS: Tell me how you became a food expert after a career as a journalist in Iraq? What was your trajectory like?

FC: After finishing my Journalism degree at Uni in 2003, I went to Jordan and Iraq to cover the war. Next year I was in Sudan and Darfur as a freelance journalist, writing stories and taking pictures. When I came back from reporting on HIV in Africa in 2005, I was the weekend editor for a news website, so I had Mon to Wed free. I always love eating and drinking.  I enrolled in the first Masters in Gastronomy and Journalism program here in Barcelona. It changed my path entirely.

While I was working at the news website, I became a regular contributor of CUINA, which led to tons of other magazine assignments,  and eventually the opportunity to work with Australian chef Frank Camorra and food writer Richard Cornish on their books about Barcelona and Andalucía.

In late 2011 with my friend Àlex and I started a company promoting Catalan gastronomy and culture, and here we are.

JS: What is the mission of Aborigens? What do you want your clients to take away from their educational experience of Catalonian food?

FC: We are not just a food tour company, I mean, yes, we do run tours for travelers with an interest in food, but that is just one part of our work. We work for professionals (chefs, importers, cooking schools, universities, journalists, tv producers, publishers…) interested in new trends, finding new products for them, working as a fixers, designing academic activities around food, ethnography, language or history, producing content for tv shows, writing about restaurants in guides about Barcelona and Catalonia, researching for other writers, etc.

In all these cases, the mission is always to promote Catalan culture through our cuisine and gastronomy. There, there are many food clichés around Spain (tapas, paella, sangria and pintxos). The way they are presented to tourists masks a much more complex and diverse reality. And here is where we appear. We want visitors to enjoy the lesser known side of Catalan cuisine as we do. We like Spanish food and tapas (and most of our competitors offer that), but we want to show the other side of the coin.

JS: What are some examples of surprising experiences you have offered to your clients? Have you ever had any obscure requests?

FC: We love to see the faces of our clients tasting all kind of offal (tripes, testicles, brains…) for their first time… The chance of travel around Catalonia every month in search of great producers and farmers is like traveling without leaving your country.

Obscure adventures? Being asked to offer non-legal services (we cannot say more), someone once interrupted a tour to go straight to a whorehouse, and another time we discovered a “rat or mole” from a competitor on our tour. It is difficult is to start a business…

JS: Did you grow up cooking with your family? You and your brother seem to share this deep passion for your regional food.

FC: We always loved food, eating, visiting restaurants and meeting producers since we were kids. Our grandparents, who came from a humble family (peasants), taught us that cooking at home was a form of entertainment.  Eating at a high end restaurant is exciting and sometimes challenging, but not nearly as touching as homemade food that is simple, humble, honest, modest, without ambition, pragmatic that most of the time is born from the need. These meals speak about a landscape, a tradition, habits, social roles, intimate memories, nostalgia, and much more.

JS: What makes your father’s paella better than any  paella money could buy?

FC: My dad was in charge of cooking at home when we grew up. My dad’s dishes (not only his rices and paellas) are the best because are the only ones that take me to that intimate and personal corner where I am just me.

JS: What is the origin of Pan con Tomate (the bread rubbed with tomato and garlic)? I just can’t believe I have never seen that at home.

FC: Nobody knows. Bread with olive oil is common all along the Mediterranean but tomato came to Catalonia in the XVI century but was not widely used until the XIX. So it seems that rubbing a tomato was created in the simplicity of rural/peasant cuisine to softer the dried bread during sometime in the XIXth century. Then, Catalans made this dish an icon of our cuisine.

JS: We used a very special olive oil in our dish, one that your procured through a pig farmer…What’s the story there?

FC: This is an olive oil from a variety called Corbella; there is a huge world beyond the famous Arbequina most people identify as “Spanish Olive Oil.” I met a woman who runs a company specializing in pig semen for breeding. This is actually a very important job here, breeding the very special pigs used to make high-end pork products.

She has cultivated the Corbella trees and started making the oil, recovering a tradition that was almost lost. Tiny production but really good.

JS: You prepared a salt cod salad for me. what is the origin of salt cod? how did it become a staple in the Catalonian diet?

FC: Cod is the most important fish in Catalan gastronomy. It came (salted) from the north atlantic thanks to the Basques (and then spread overseas also thanks to the Portugese) around the XVIth century. It became popular because it was preserved and could travel inland, it was cheap, and, in a Catholic country, you could eat it during Lent (around 160 a year) when meat was forbidden by the church.

Since it is a big fish, you can make so many different cuts. We even eat the swimming bladder, which is a delicacy. Here in Catalonia we have this saying, “qui talla el bacallà.” That means, “who cuts the codfish.” That’s like saying, “whose the boss, who is in charge, who wears the pants.” That’s how big cod is in our culture.