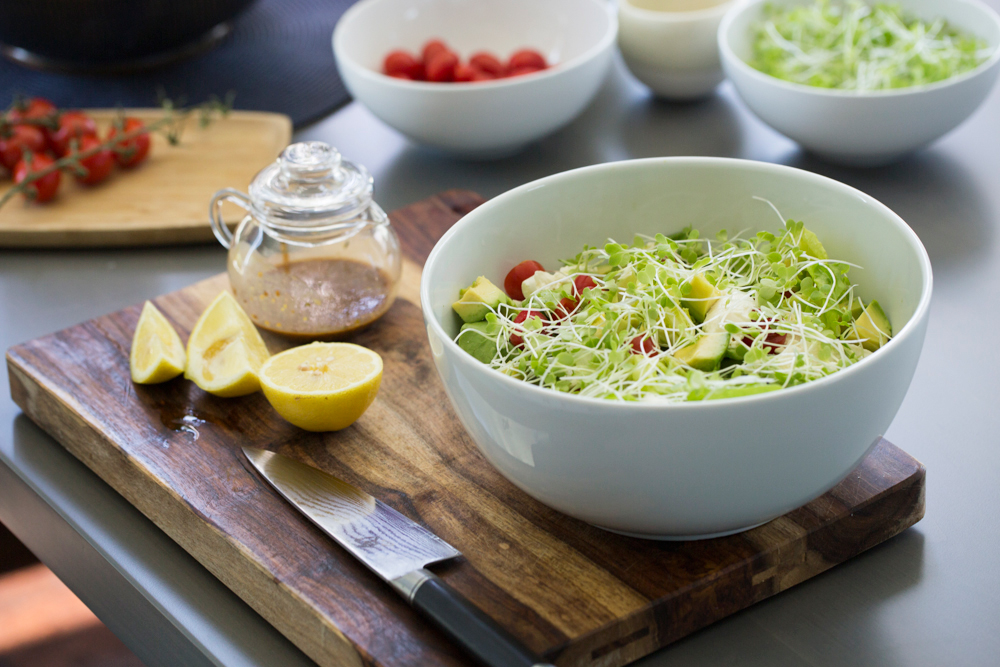 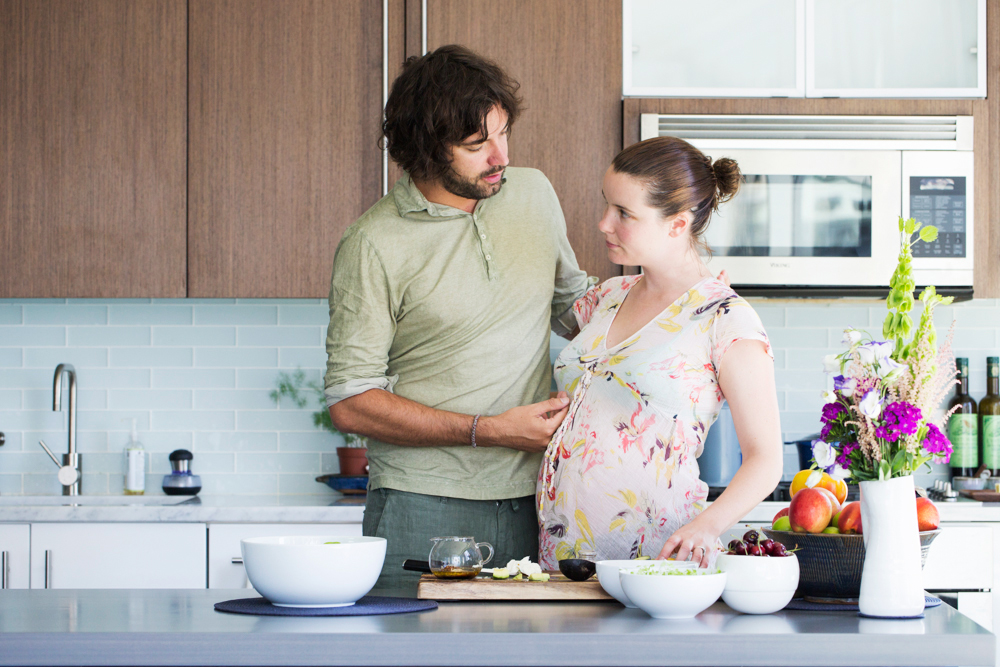 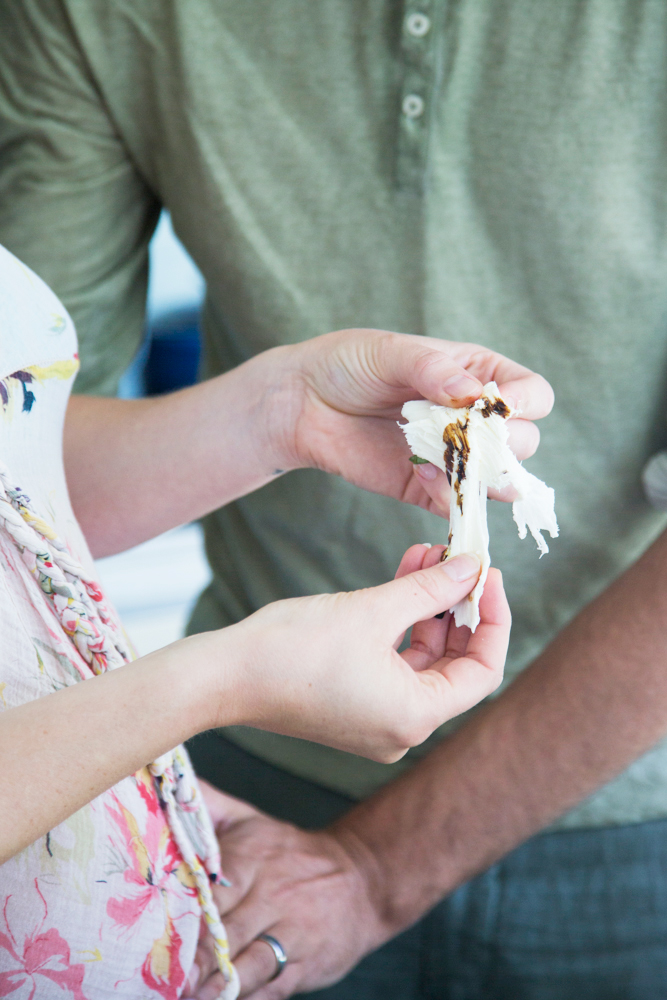 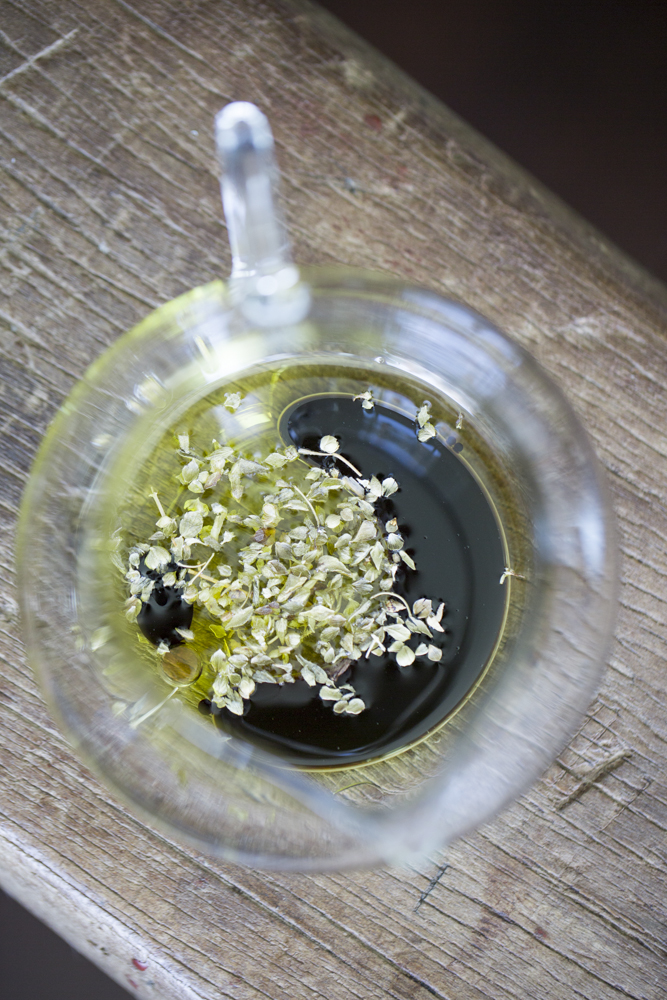 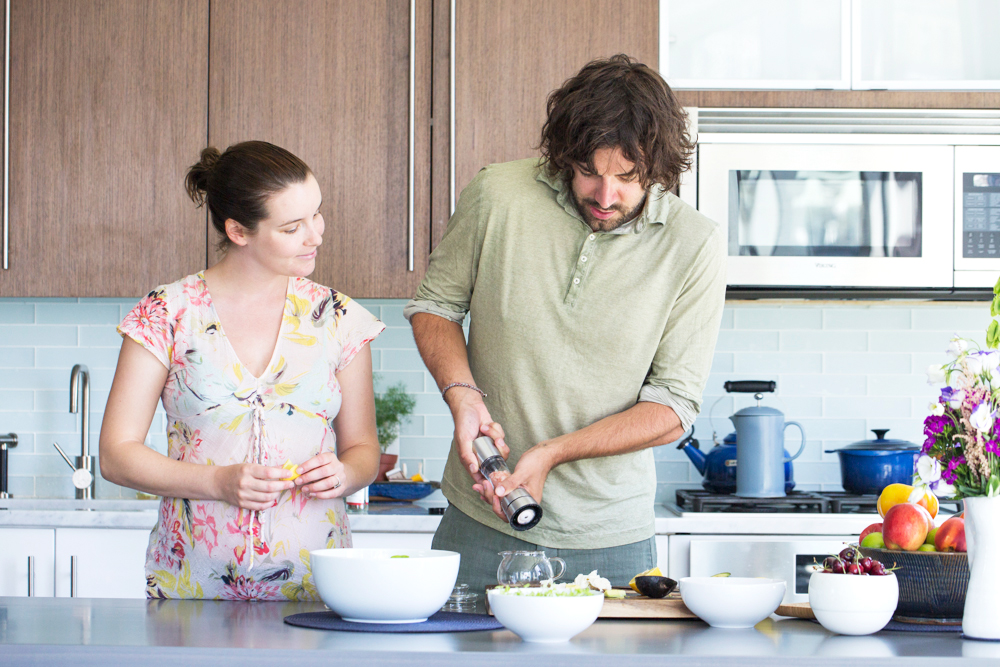 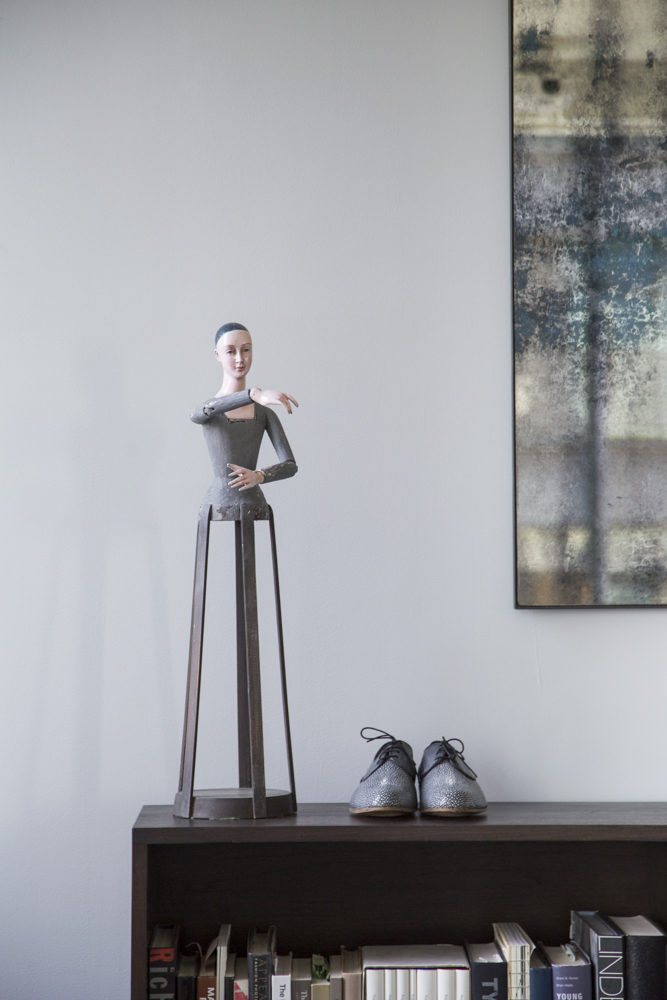 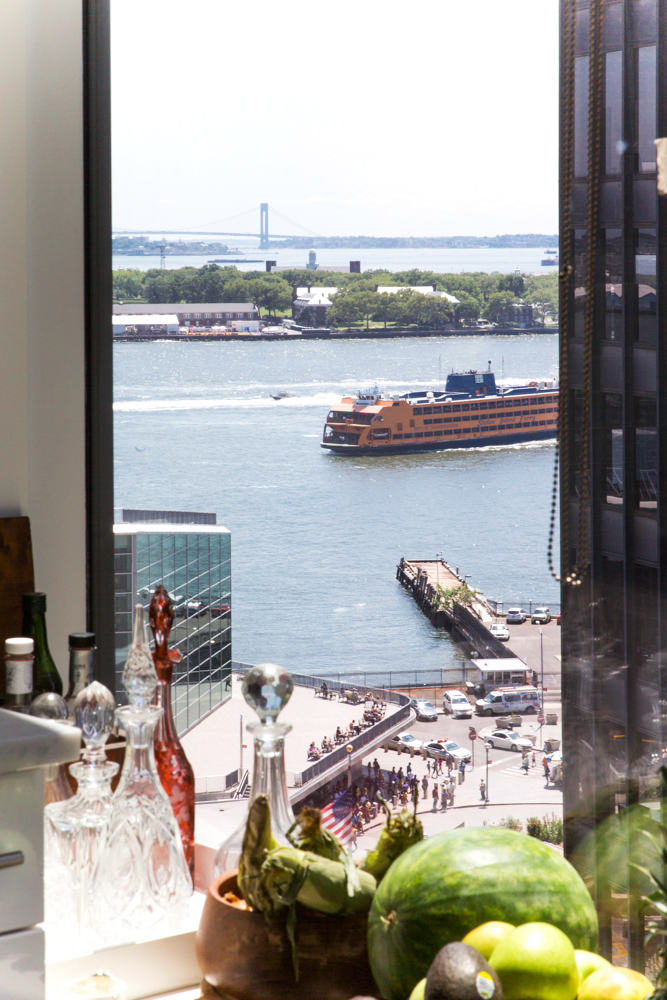 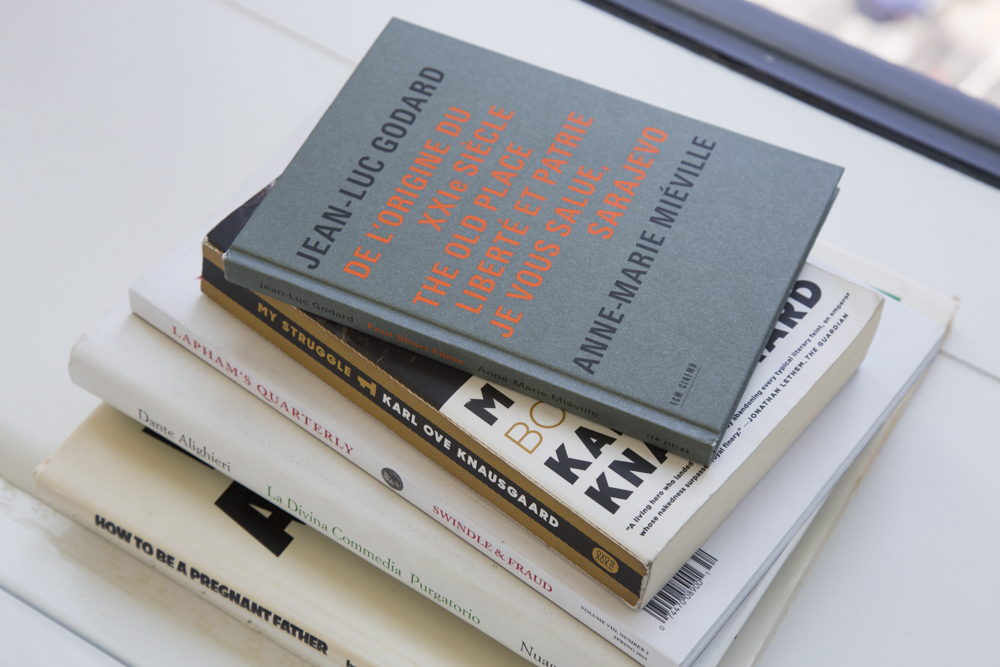 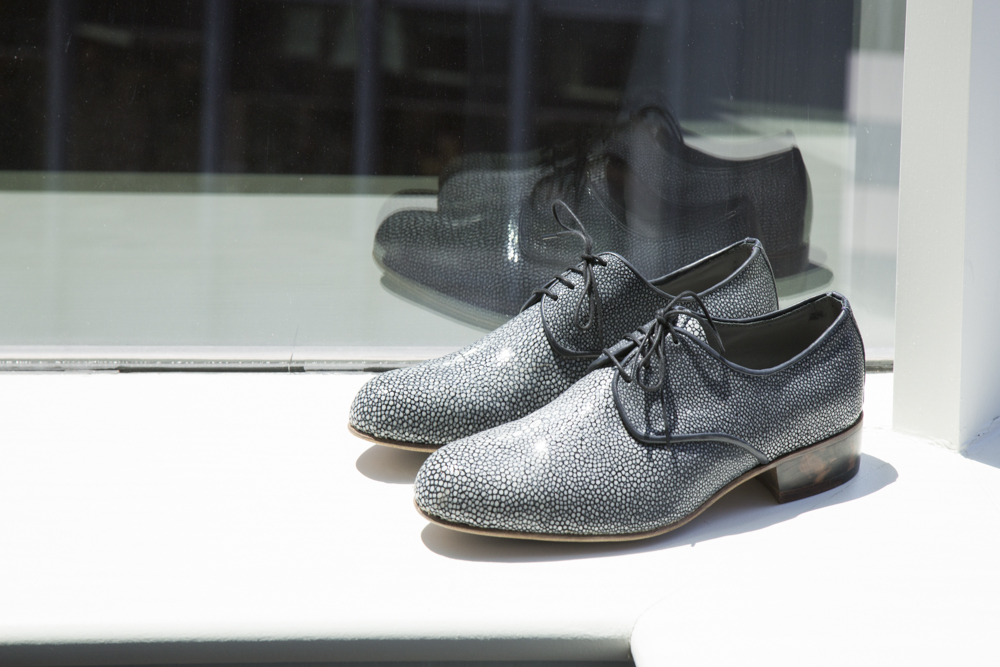 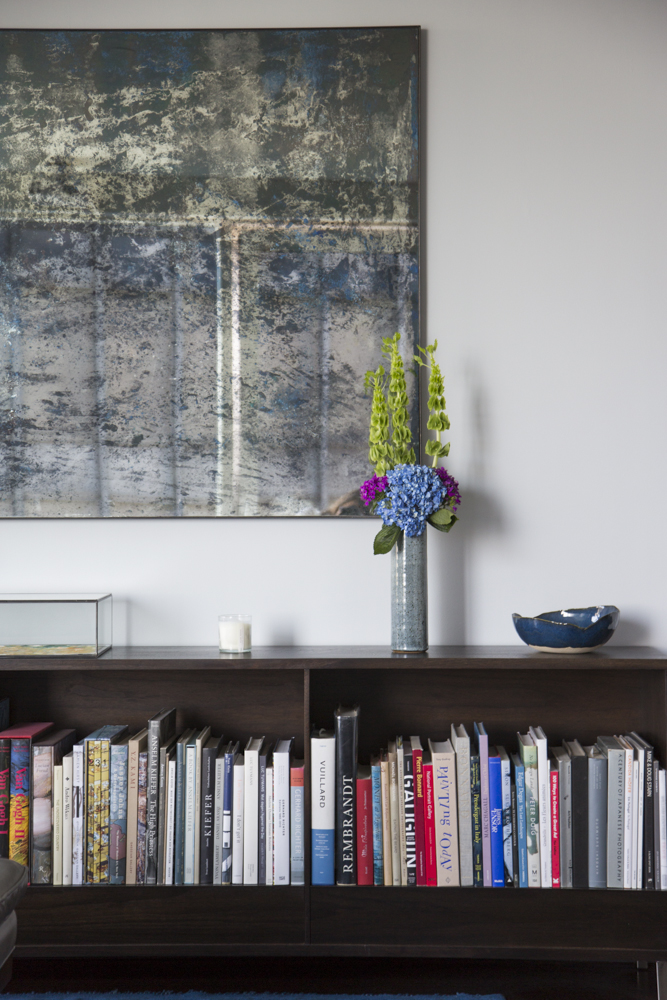 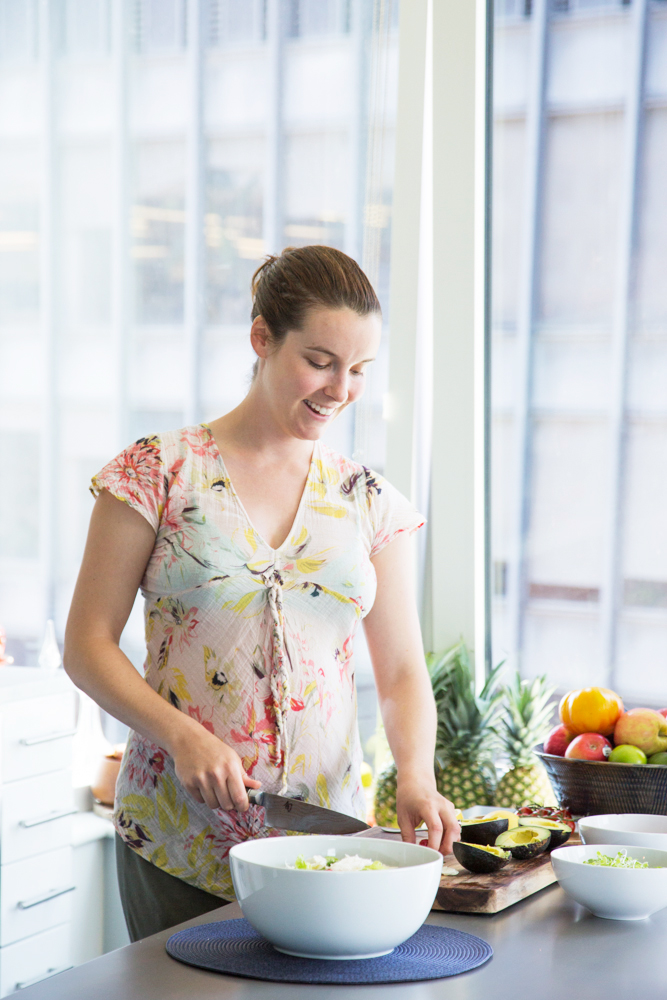 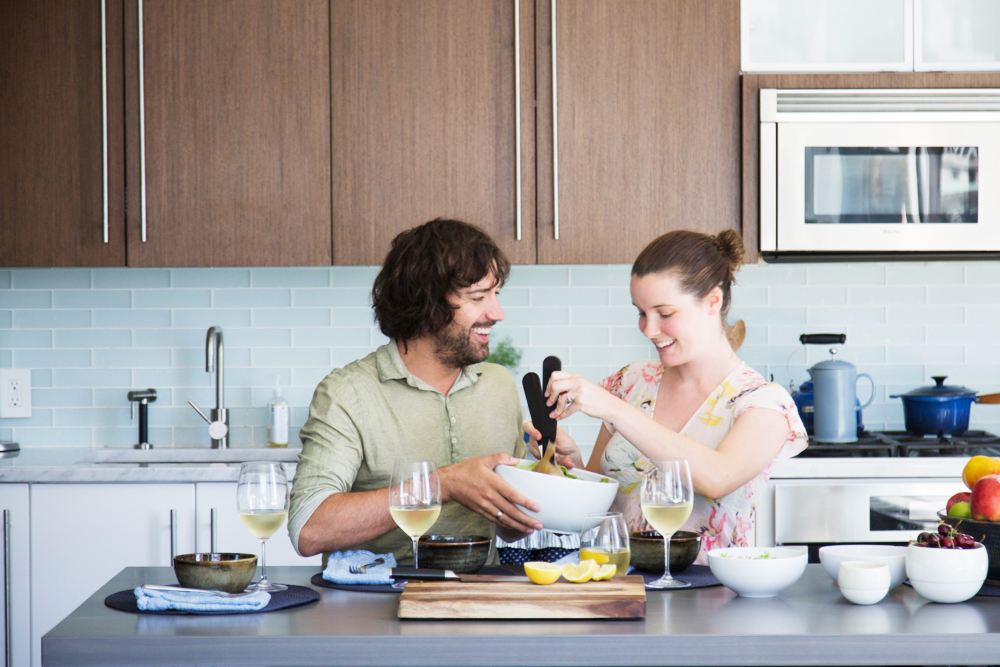 Mozzarella di Bufalo is not your everyday mozzarella; it is actually made from the milk of a big fat water buffalo! This cheese has roughly twice the fat of cow’s milk mozzarella, which is… totally awesome. Be sure your mozzarella di bufalo is imported from Italy and not made in America; it will be much better.

Combine all ingredients for the vinaigrette, including smashed garlic, in a small jar with a tightly fitting lid. Shake vigorously and allow to sit and marinate.

Wash and spin butter lettuce, keeping the leaves as in tact as much as possible. Add to a large salad bowl. Cut avocado into 1″ cubes and slice your tomatoes in half and set aside. (squeeze lemon on the avocado to prevent browning).

Give the dressing another shake, remove and discard garlic clove, and toss the dressing with your butter lettuce 1 tbs at a time until the leaves are evenly coated. Add microgreens to the top of the salad (you probably don’t have to wash these).  Scatter your torn Buffalo Mozzarella on top along with your tomatoes and avocado.

Season with sea salt and cracked black pepper to taste and serve along with a crusty bread.

Combine all ingredients for the vinaigrette, including smashed garlic, in a small jar with a tightly fitting lid. Shake vigorously and allow to sit and marinate.

Wash and spin butter lettuce, keeping the leaves as in tact as much as possible. Add to a large salad bowl. Cut avocado into 1″ cubes and slice your tomatoes in half and set aside. (squeeze lemon on the avocado to prevent browning).

Give the dressing another shake, remove and discard garlic clove, and toss the dressing with your butter lettuce 1 tbs at a time until the leaves are evenly coated. Add microgreens to the top of the salad (you probably don’t have to wash these).  Scatter your torn Buffalo Mozzarella on top along with your tomatoes and avocado.

Season with sea salt and cracked black pepper to taste and serve along with a crusty bread.

I had the pleasure of meeting Erik and Brianna in Madrid this summer, where I sorta fell in love with them both — for their work, their chill vibes and most of all, the brilliance of their shared approach to work, art, travel and family.

Erik is one of the most sought after fashion photographers out there. His bold color palette and a uncompromising style could be stills from an imaginary sequel to The Fifth Element, if it were directed by painter Gustav Klimt. Bri, an illustrator and arts educator herself, has managed to procure the role of his “assistant” on-set, meaning this couple travels the world together, hopping from Spanish castles to mountainsides in Gstaad, getting paid to do so. Here’s the real life-hack at play: Erik achieves his signature style using only natural light, with much of his saturated, painterly technique brought to life in post-production. So, where so many photographer’s are bogged down with complex lighting set-ups, equipment, and annoying digital techs on-set, Erik and Bri travel exceptionally light. All they require is a single Canon 5D and the same lens Erik’s mother gifted him when he first forayed into photography in the 1980s. What could be more charming than an incredibly successful husband-wife team from Minnesota, who work with names as big as Junya Watanabe (this is the coolest spread I have sever seen), and the NY Times, but who somehow carry not an ounce of pretension and barely any camera gear at all?

In the last issue of Harper’s Bazaar, Erik shot 60 pages, but he somehow finds the time to do pro-bono artist portraits for the prestigious Marian Goodman Gallery. Bri (8 months pregnant and still hanging tough in places like Madrid’s Bar Cock with the rest of us), just finished writing and illustrating her first children’s book. Their next project? Having their baby and then escaping on a long vacation to New Zealand. These two are my heroes.

Julia Sherman: Erik, tell me how you got the idea to make Nomenus Quarterly?

Erik Madigan Heck: Nomenus Quarterly was a box-set of off-set prints that we would sell in editions of 10, with roughly 20 prints in the box. The idea behind it was to create a space that merged avant-garde fashion at the time (Carol Christian Poell, Ann Demeulemeester, etc.) with some of the art that wasn’t on the tips of the tongues to millenials — Anselm Kiefer, Edourd Vuillard, Michael Borremans… I didn’t personally have an interest in the downtown New York art scene; I was much more interested in Northern European painting and how that translated into fashion as well. You have to remember this was 2007, and the internet hadn’t completely ruined our lives yet- things were still mysterious, and could be underground, or “avant-garde.”

JS: People like to refer to the project as, “the most expensive magazine in the world,”comparing the price tag to that of a Birkin bag, one of the fashion’s foremost signifiers of both class and excess. Is that a fair comparison, or are the missing the point entirely?

EMH: Hah! That tag line will haunt me forever. It was never intended to be, “the world’s most expensive magazine.” They’re missing the point, and probably didn’t understand why it was priced that way 🙂

JS: Let’s talk about your personal style. I really appreciate that you aren’t consumed by the world in which you operate. You are extremely unassuming and unpretentious, a shorts and t-shirt kinda dude. But then, you do break out into sonets over a pair of sharkskin shoes…what is your relationship to material things? Has it changed over the years as you have been embraced by the fashion world?

EMH: I like to be invisible now when I’m out; if I can walk into a room and have no one notice, that’s about as good as it gets for me. So I’m sticking to my “Dad At Disneyland” vibes for now… come Fall I might spruce it up a little bit, but don’t get excited.

JS: You avoid depicting your subject’s faces at all cost. I actually used to have a similar tendency when making my own fine art photography. I never fully resolved where that came from, except to say that faces where just too specific. Where does this come from for you?

EMH: I’ve tried analyzing this both personally and art historically. Because I work in an industry that is so obsessed with celebrity and faces in general, its really nice for me to focus on everything else – the clothing, the set, the color, etc… I don’t really believe the “intimate” portrait is ultimately that interesting, especially now in the age of selfies where everyone is trying to express themselves intimately / publicly at the same time. I find it much more fulfilling to focus on color, and beauty as an ideal, as compared to trying to show someone’s facial expressions.

JS: Do you ever feel inclined to up your game technically? Or, is the beauty of your jobs that you travel light and are completely unencumbered by gear? I imagine it must take a serious amount of confidence to say you can shoot these massive campaigns with one small camera and lens.

EMH: Deep down I am too superstitious to switch out my camera. I think it would cast a spell over my whole being. That is probably not true, and I probably give my shitty old camera too much credit, but I can’t imagine working without it.

JS: What are some of the most memorable locations you have had the opportunity to visit since working together?

EMH: This year: Scotland twice, the South of France, and kayaking the Middle Fork of the Salmon River in Idaho….

JS: Bri – Tell me the story of your romance. This is the stuff dreams are made of.

Brianna Karen Killion Heck: Erik and I met in Minneapolis where I was living and where he grew up. He was in town because the lobby of his apartment building was under water from Hurricane Sandy. We met at a party, went out a few times, and then he convinced me to come visit him in New York (my first time to the Big Apple). After four days in New York, I knew he was the person I was going to marry. He felt the same, and a month later he asked my parents for their blessing. Two months later we were married in the Minneapolis Courthouse.

Before I met Erik, I thought you had to be with someone for several years before you could know if you wanted to marry them. I never would have thought I would meet the person and be married two months after a first date.

JS: You teach art and are currently illustrating a children’s book. Do you think about your work differently now that you yourself are about to have a child?

BKH: I am excited to make children’s books with the intentions of reading them to our little guy. We’re waiting until he comes out to see what animal he reminds us of. In my family portrait paintings, Erik is a Spinone and I’m an otter, and so far I’ve been calling our child a hedgehog because of his roly-poly jib jabs in the womb. So we shall see.

JS: You might be the only high-end fashion photographer’s assistant who also caters on set. Are people surprised by your unconventional role on these fancy-shmancy fashion shoots? What is your favorite thing to cook for the crew?

BKH: Haha that’s probably true, I haven’t seen many assistants that are also wives and caterers. We have a devoted crew who are always excited when I’m the one catering. The thing that get’s devoured the quickest is simple veggie sandwiches — cucumber, lettuce, sprouts, tomato, avocado, and havarti with dill cheese, a delicious mustard and a vegan mayo and it’s so simply delicious! People like healthy, homemade food!