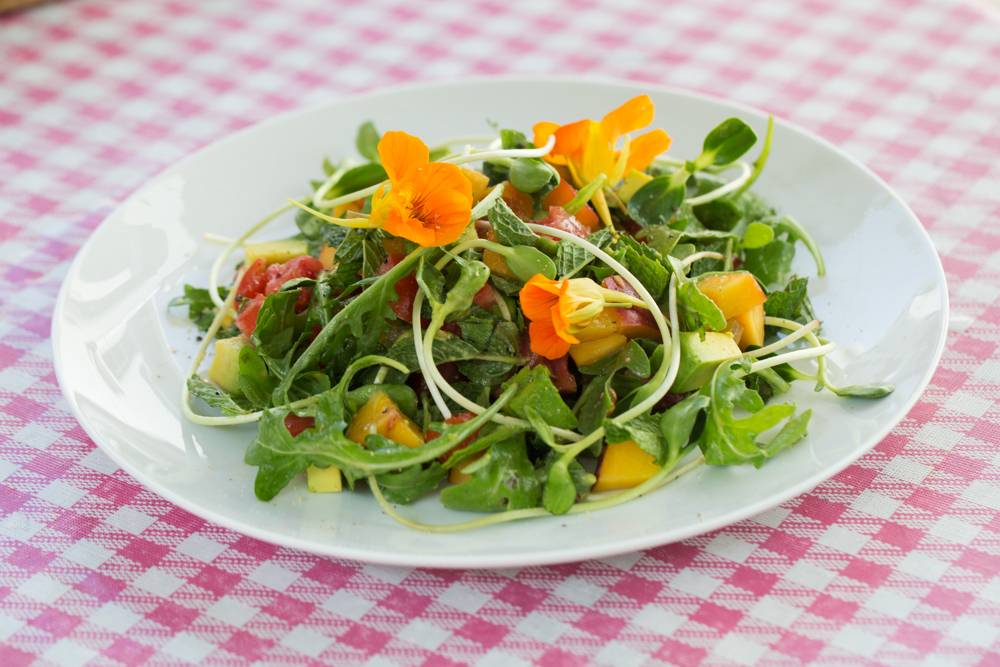 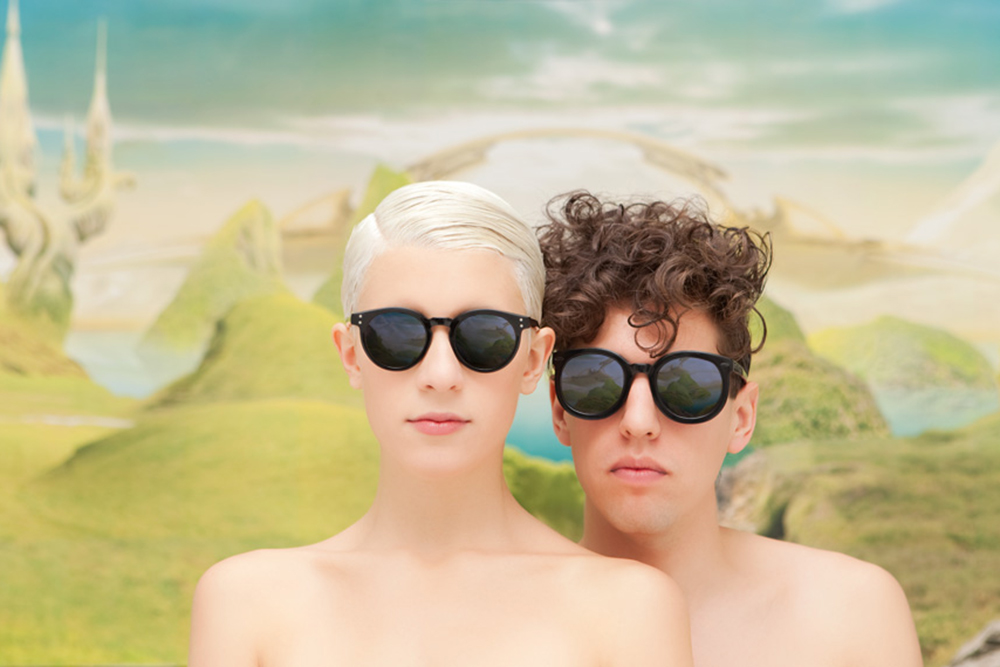 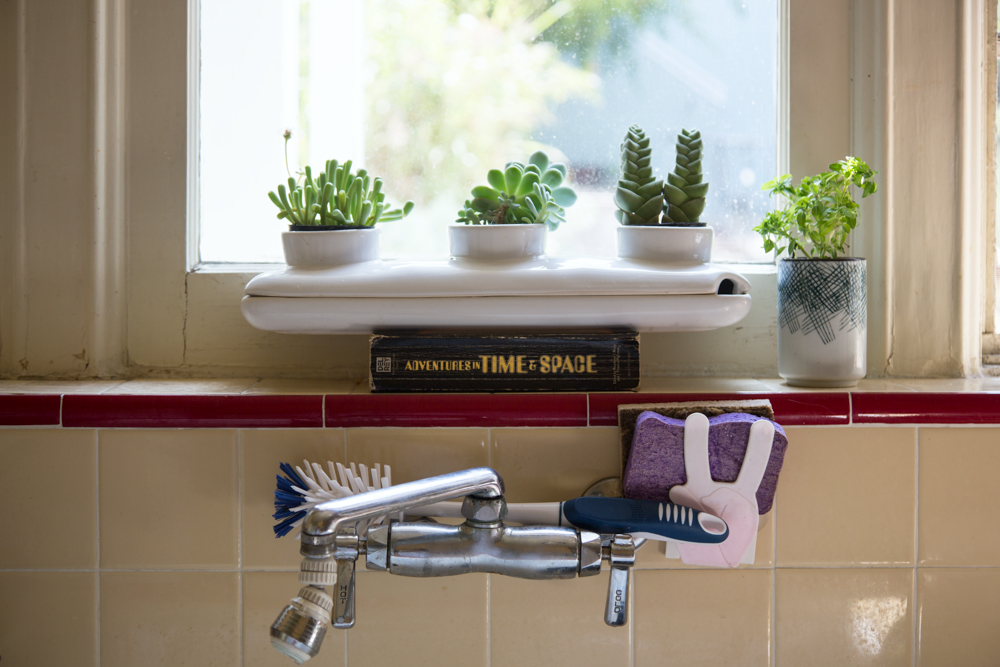 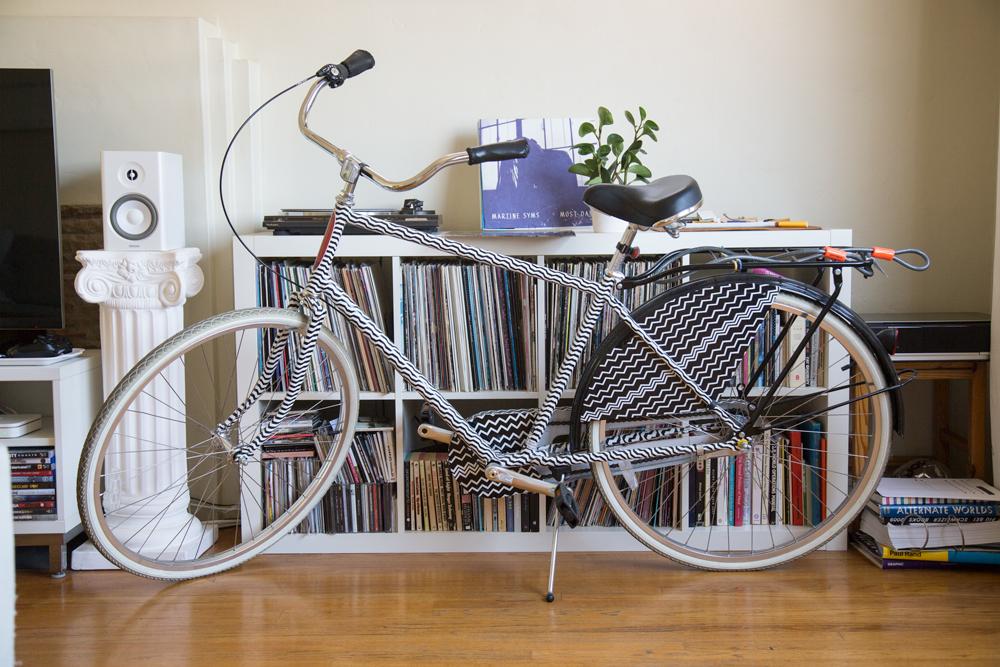 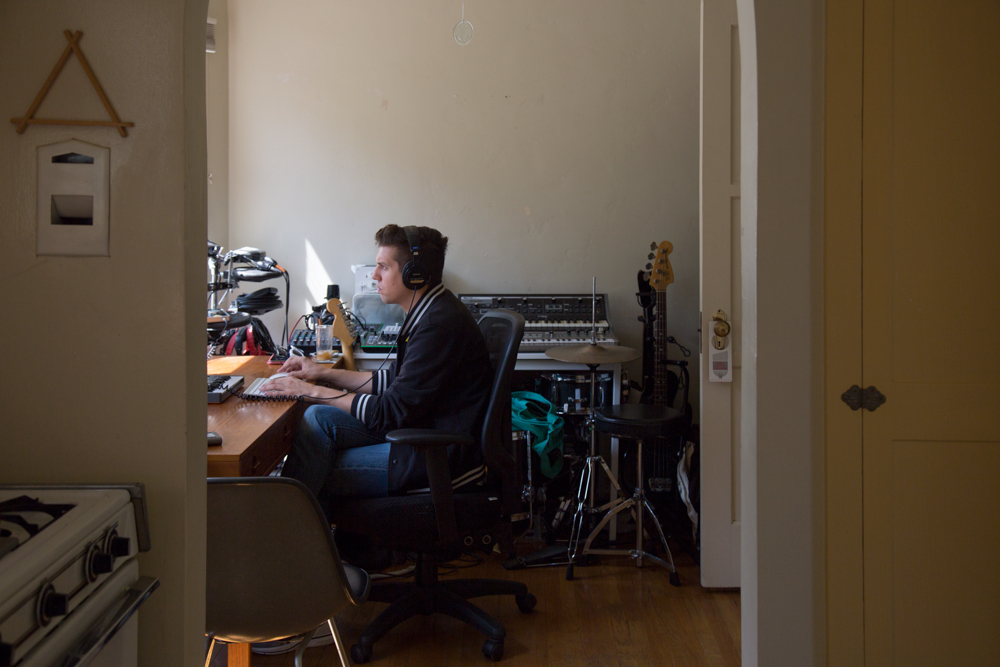 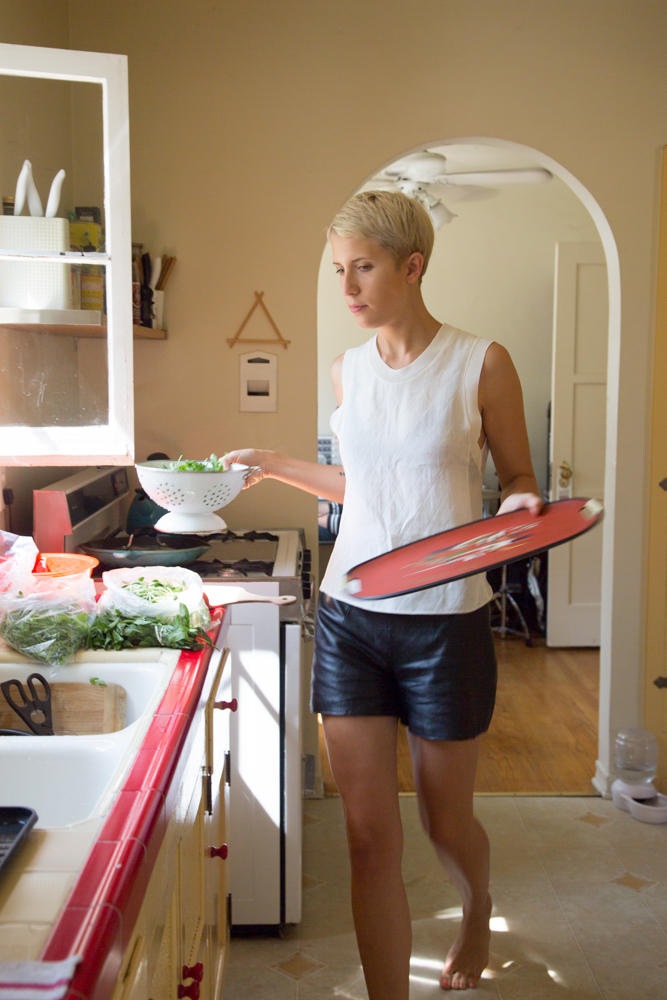 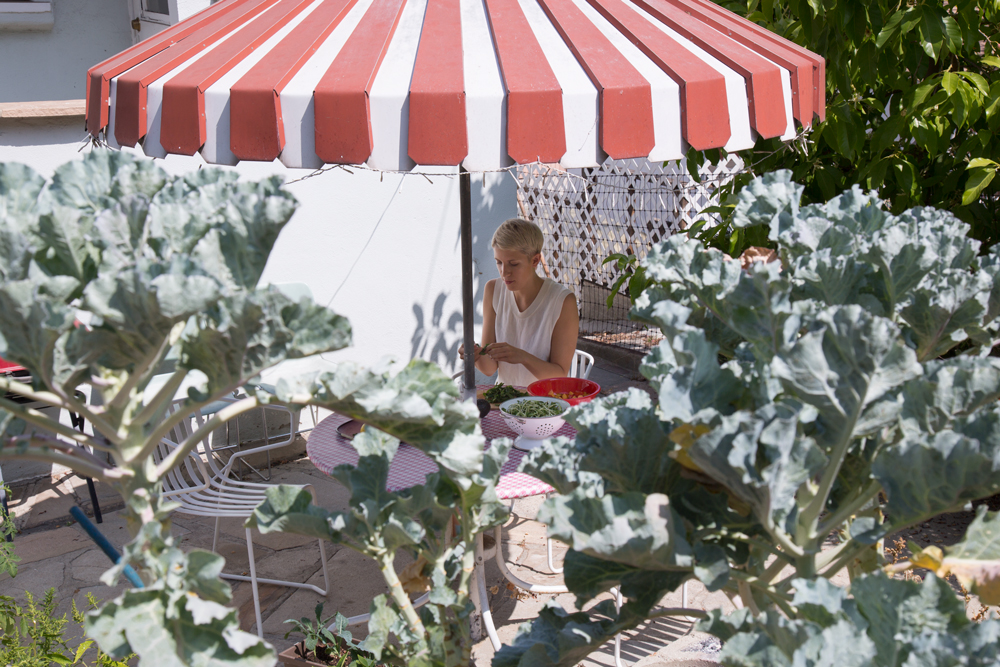 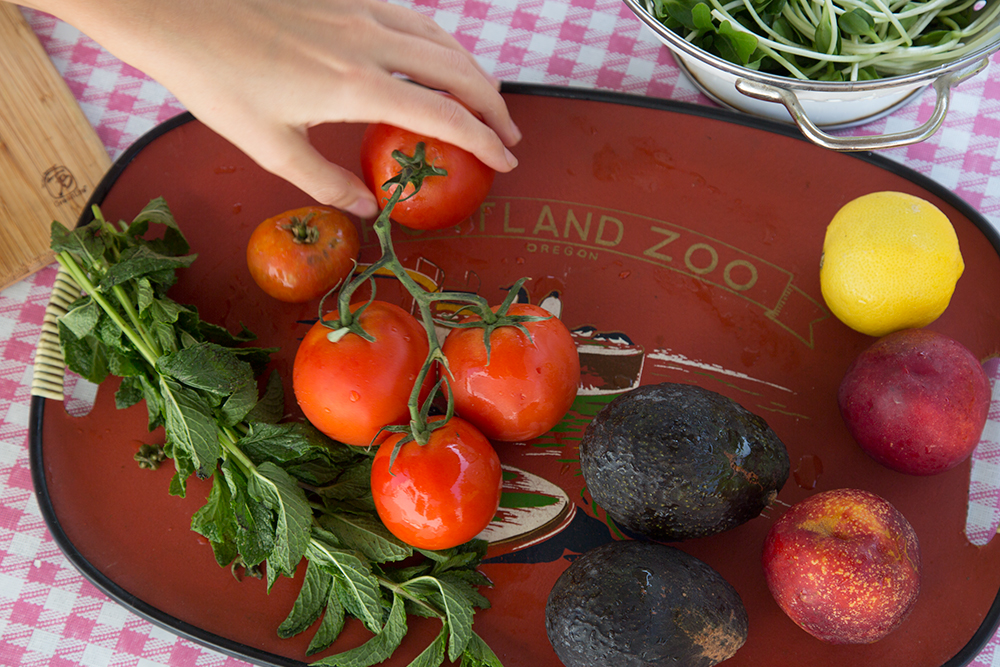 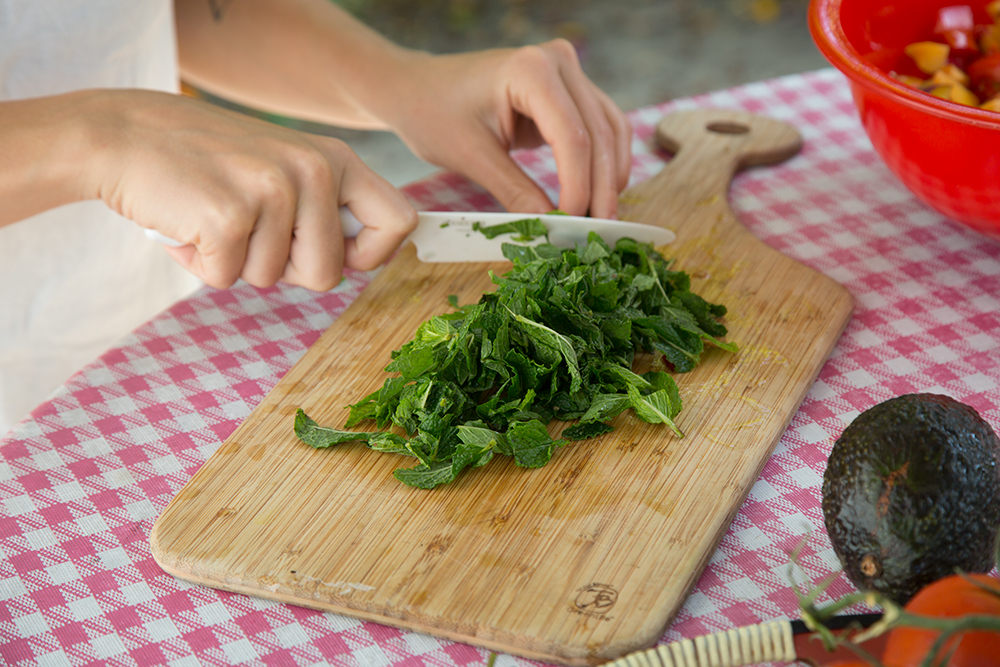 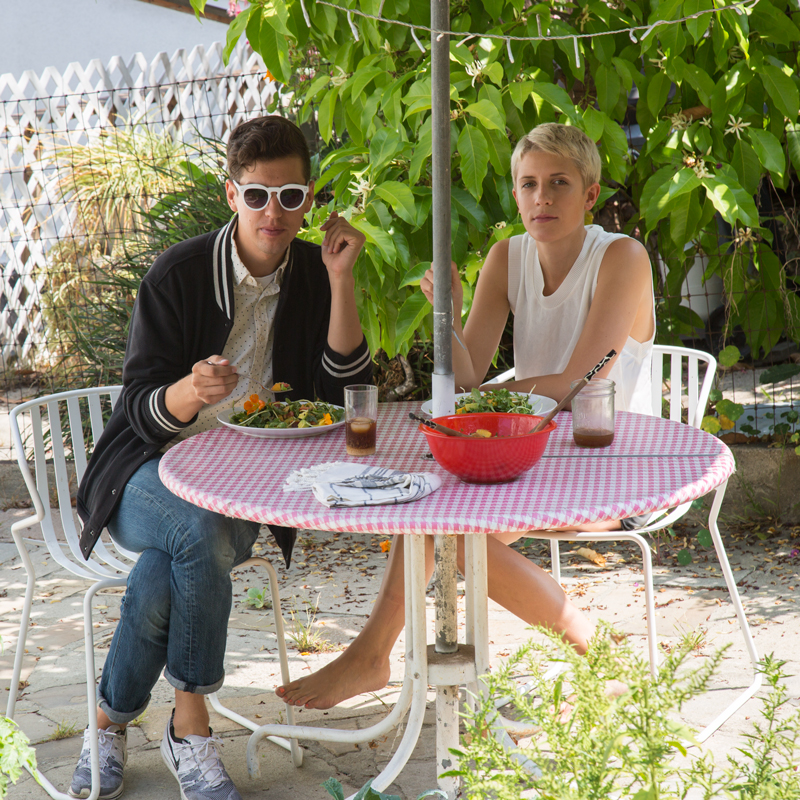 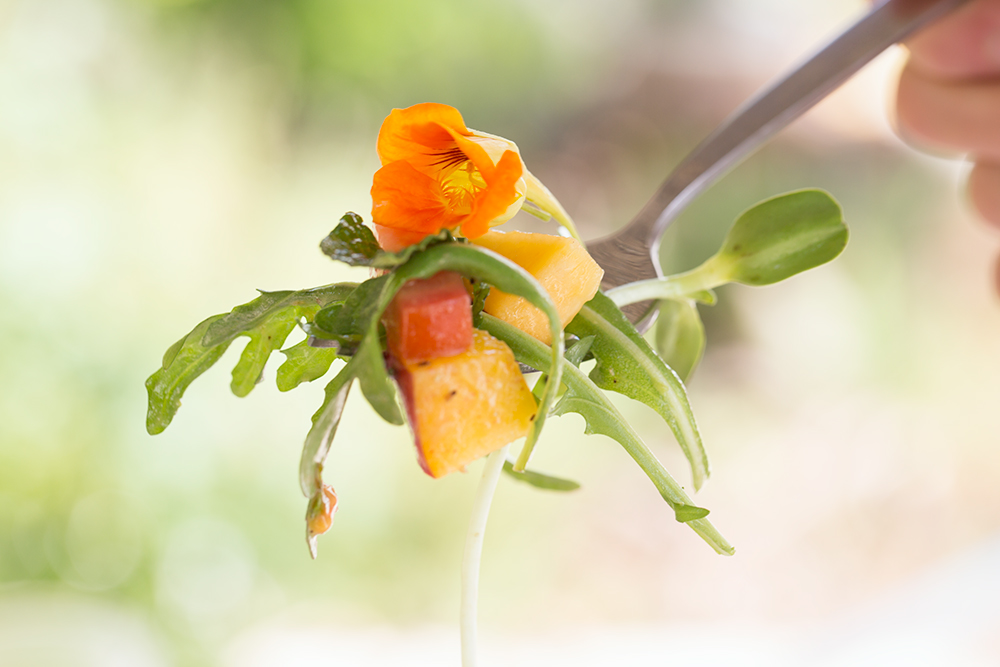 This salad is a perfect summer salad, and very L.A. Make sure you get the best ingredients.

Wash and spin nasturtium, sunflower sprouts and arugula. Wash mint and remove from stalks. Chop finely and add to a bowl with greens.

Mix dressing ingredients together in a small bowl. If your coconut oil is solidified, pop it in the microwave for 10 seconds to melt. If the dressing is too thick, add 1 tsp water at a time to thin.

Toss with greens. Add fruit, avocado and tomato and toss gently to coat. If you have them, garnish with nasturtium flowers.

Wash and spin nasturtium, sunflower sprouts and arugula. Wash mint and remove from stalks. Chop finely and add to a bowl with greens.

Mix dressing ingredients together in a small bowl. If your coconut oil is solidified, pop it in the microwave for 10 seconds to melt. If the dressing is too thick, add 1 tsp water at a time to thin.

Toss with greens. Add fruit, avocado and tomato and toss gently to coat. If you have them, garnish with nasturtium flowers.

Claire Evans is not your average rockstar, she is not your average writer, and she is certainly not your average sci-fi enthusiast. This Los Angeles based renaissance woman was born in Swindon, UK, grew up in Paris, and emigrated to the United States, straight to Portland, OR as a teen. She moved wither her family to Los Angeles, and  began playing music in college in a janky art-noise ban called Weirdo/Begeirdo. In 2004, she was randomly paired to play a show with an early iteration of her current band, YACHT, when she met Jona Bechtolt, now her bandmate, roommate, collaborator and partner.

When Claire is not writing, recording or performing music, she is working as the Futures Editor of Motherboard, Vice Magazine’s online magazine and video channel dedicated to the intersection of technology, science and humans. This is Claire’s, “favorite job title ever.” I met Claire at Moogfest in Asheville North Carolina this past year, where, by day she hosted a ragtag group of scientists, artists, and writers to discuss the music of the future and read an Afrofuturist screenplay, and by night, she played a mesmerizing show as YACHT. I tracked Claire down in her Silverlake home, where I had the pleasure of sharing a salad with her in her backyard. I have been listening to their song Shangri-La on repeat ever since, with the hope that this might somehow impart the confidence to rock leather shorts and bleach blond pixie-cut, while effortlessly preparing salad at home…No luck yet, but I’ll keep you posted.

Claire Evans in Her Own Words

Julia: Have you always considered yourself a writer and a musician? Are people surprised to find out that you manage to be a rock star AND an academic (if you consider yourself an academic, might be the wrong word)?

Claire: I’ve always defined myself as a writer. In fact, I consider my role in YACHT to be not as much a singer—although I am, of course, the lead singer—but as the band’s “writer.” It’s kind of an ineffable thing, but I take a writerly approach to everything that I do: writing songs, of course, but also crafting the voice and language of the band when it speaks publicly. I even consider my performance on stage to be a kind of writing-out-loud.

The Venn diagram of YACHT fans and people who know my work as a writer and editor has a pretty small overlap, so both circles of people are often surprised to discover the other half exists. But I don’t think they’re that incongruous or mutually exclusive: YACHT is a plastic kind of band, concerned with technology and art and science, and very much capable of absorbing the culture shock. My interests percolate into both things

Julia: How did your love of sci-fi begin? What is it like to be part of that community? How does it differ from the music community?

Claire: I’ve been a science fiction head since I was a kid, since I bought a yellowing Ray Bradbury paperback at a yard sale. It transported me to another dimension, and I’ve been an adherent ever since. Science fiction is endlessly interesting. I think of it as the creative medium most fit for the critique of our culture, despite the negative stigma some people might associate with it. With science fiction, we can build new worlds outside of the patriarchy, outside of history, outside of time. It’s an extremely potent tool, almost mystical.

Science fiction is definitely a juggernaut, pop-culturally, but as my interest in the genre is pretty academic, my immediate community is small. I’m a position now where I can help nurture and develop emerging voices, as well as hob-nob with some of my favorite established writers, so I feel very fortunate. It’s a refreshing alternative to the music community, which can sometimes be alienating to me—as a human woman, and as a member of a relatively weird band.

Julia: Tell me about the app, it sounds fabulous.

Claire: The app was Jona’s idea. When we moved back to Los Angeles from Portland, we felt bewildered by the sheer amount of things to do in the city—people, places, foods, events. It was too much to sort through event calendars to find the shows, art openings, restaurants we wanted to spend our time and money on. We dreamed of a simple tool that would unclutter all of that, which is what we made: 5 Every Day.

The app tells you five interesting things to do in Los Angeles every day. There’s no calendar, no archive. It’s designed for spontaneous exploring. We make the selections with a brain trust of friends, and we write the descriptions. It’s a labor of love, but it’s already manifested a community.

Julia: You are a writer, editor, musician and now you are birthing an app. Do you feel like all of these pursuits naturally intertwine, or do you lead a triple/quadruple life? Or, is that just part of being a performer– splitting your personality?

Claire: For a long time, I tried to keep all my projects separate. At a certain point, however, creating divisions between different parts of my world began to feel like drawing arbitrary lines in the sand. I’m one person. I read an interesting book and it might inspire a song lyric, trigger a chain of ideas that becomes an essay, or both. There’s no sense in making distinctions. You have to zoom out a little and trust that the whole jumble will make sense, will look like a single body of work, in the long run.

Julia: You and Jona make your music at home. Do you cook while working on a new album? The studio is basically in the kitchen.

Claire: We’ve always operated under this Buckminster Fuller principle of doing as much as possible with as little as possible. We rarely record in a studio, we build our world ourselves. We live where we record. It works for us: as we’re working on songs, we go about our lives, cooking, sleeping, reading, listening. We often cook while a new melody or arrangement is playing on loop. It helps to mix the mundane with the creative, it makes the latter less precious.

Julia: What about eating on tour, how do you manage that? Do you eat salad or is that just to difficult to drum up?

Claire: Eating is the great luxury of tour. No matter where you are, or where you have to be, you have to eat. It’s a forced break in the rigors of travel. Jona and I are both vegan, so we have to make a little effort to eat well. We’re encyclopedias, now, of every vegetarian restaurant in the country—and we’re always gathering up new places. Part of the fun of being on tour is diving into the culinary traditions of every place you go. It’s a mainline into the heart of a place.