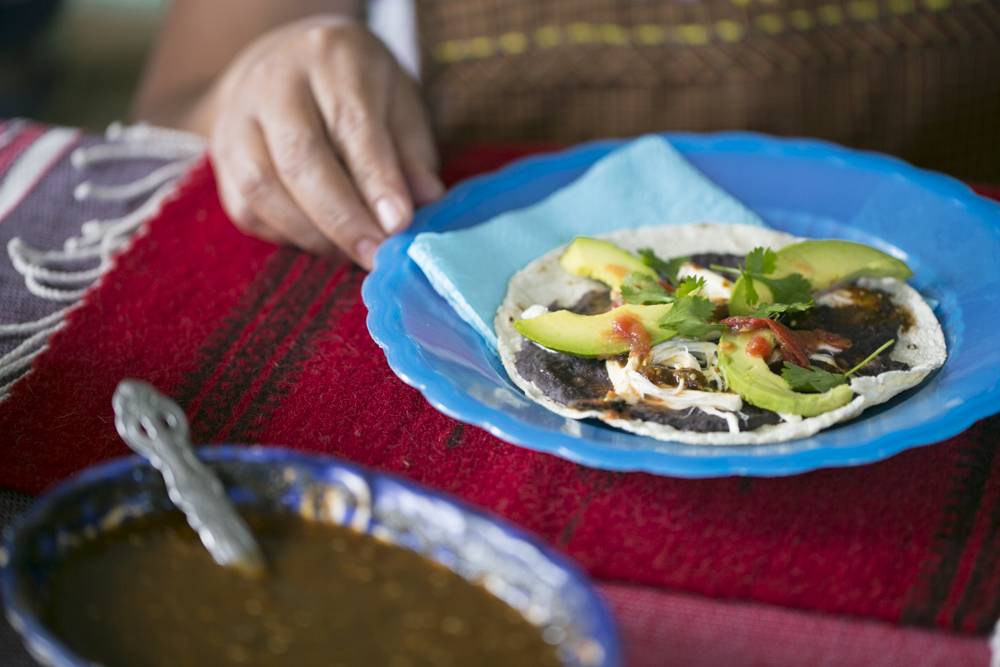 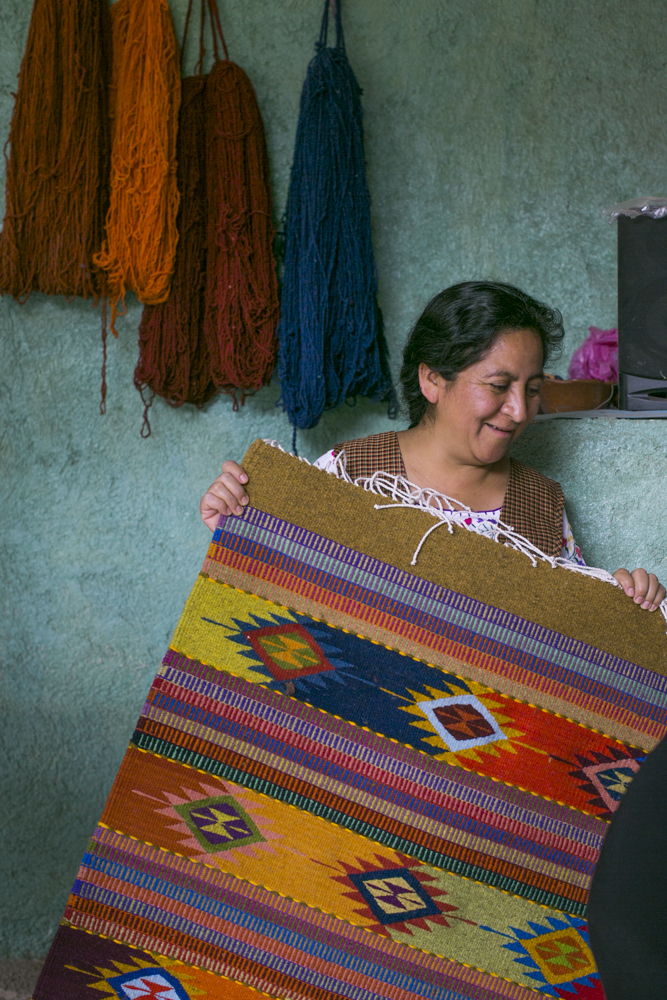 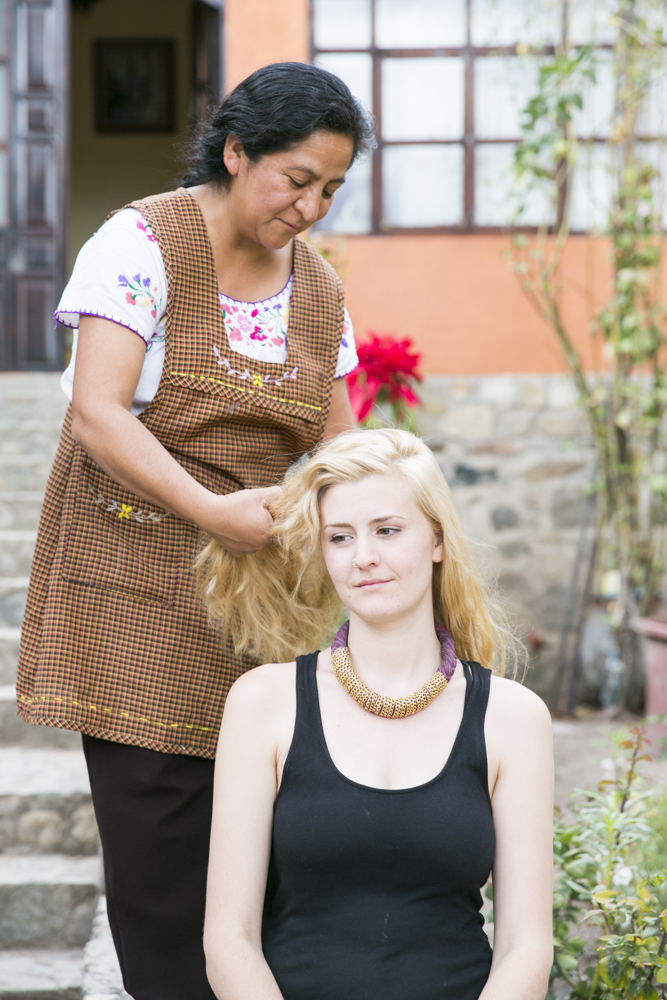 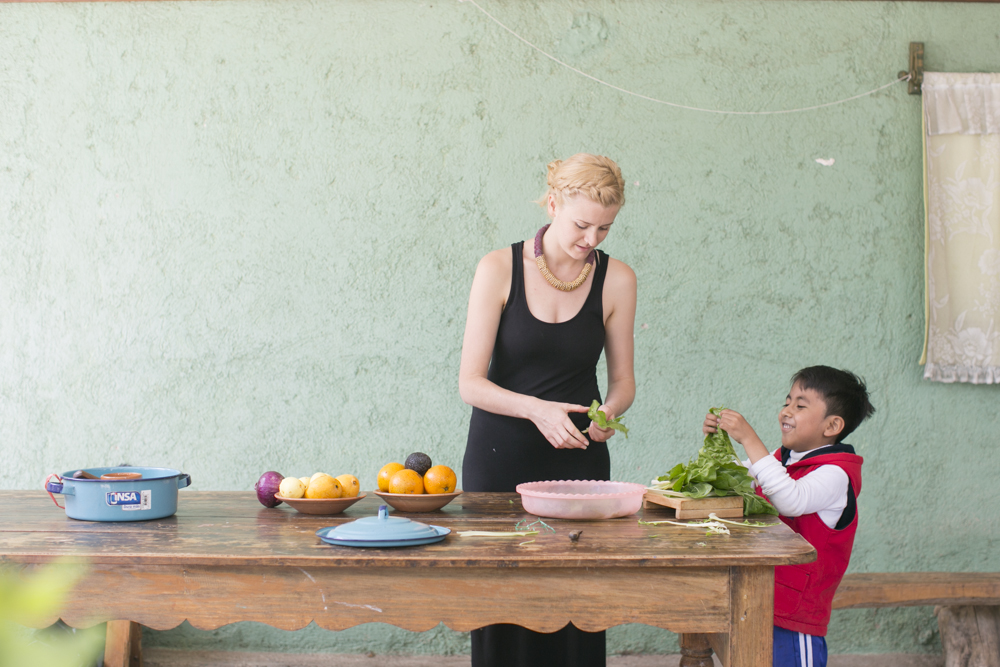 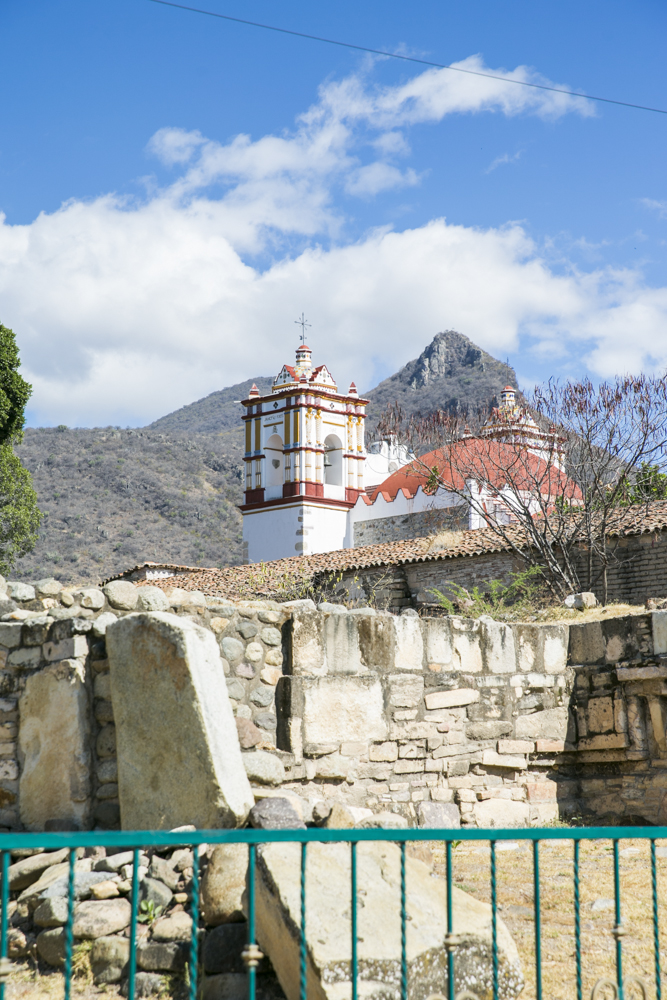 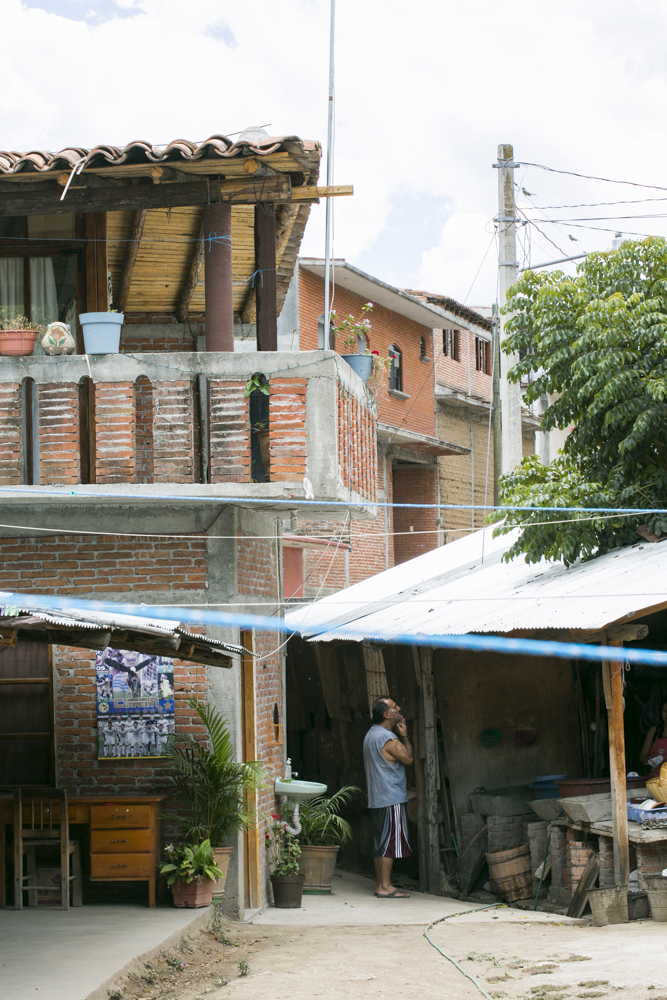 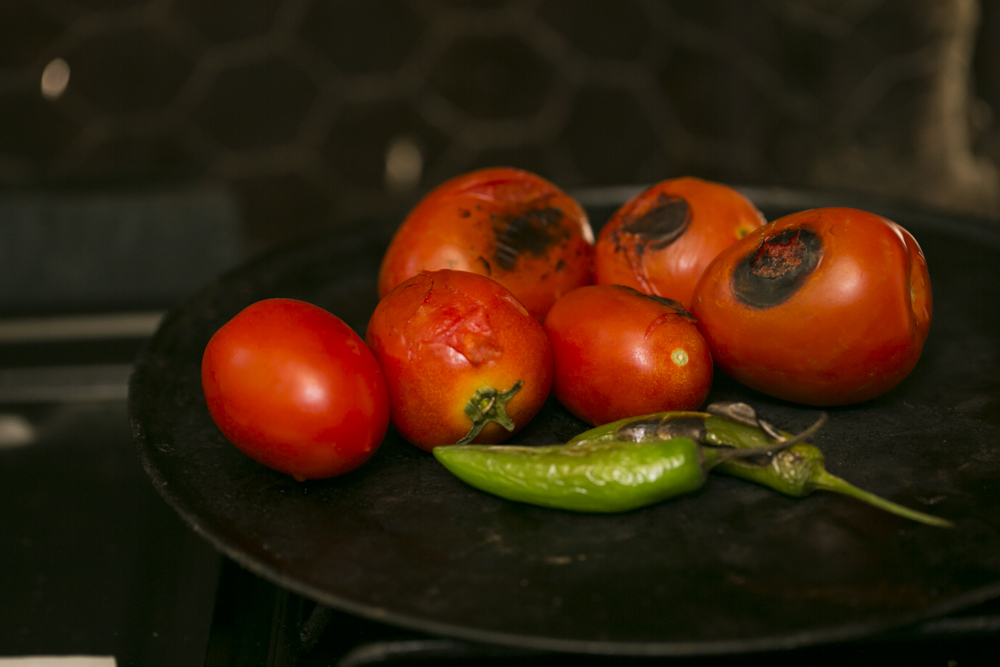 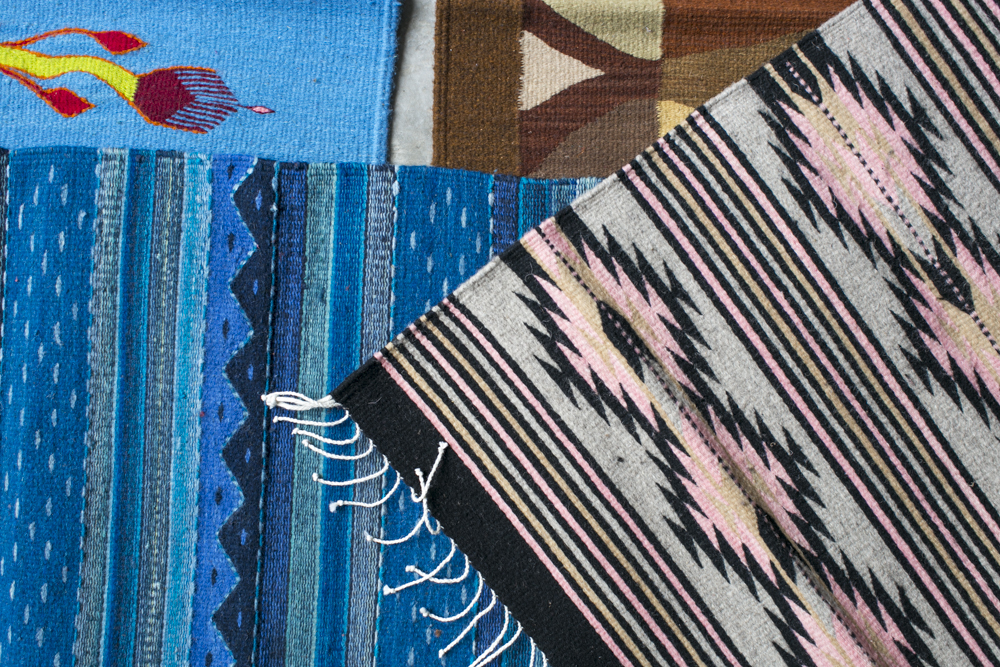 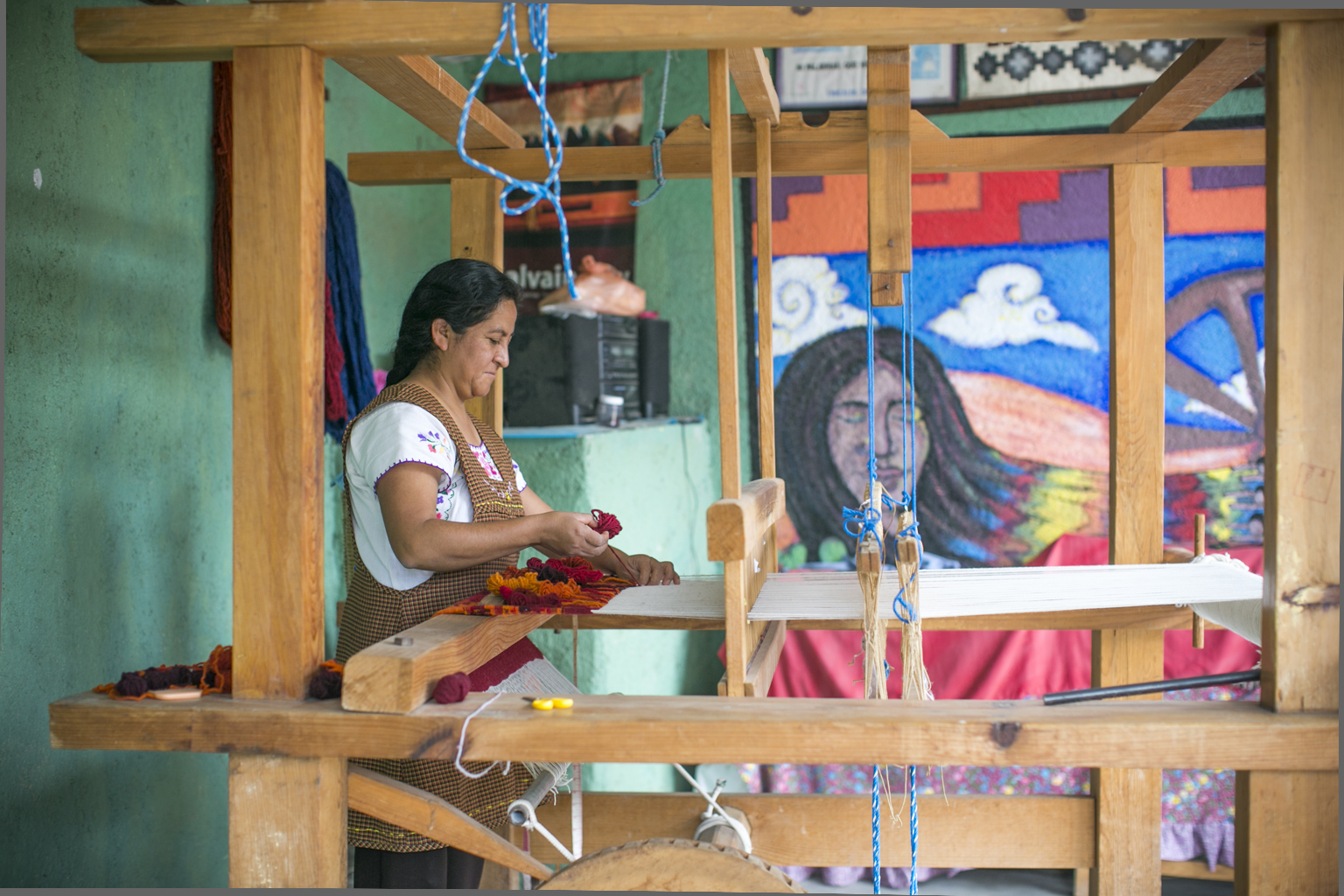 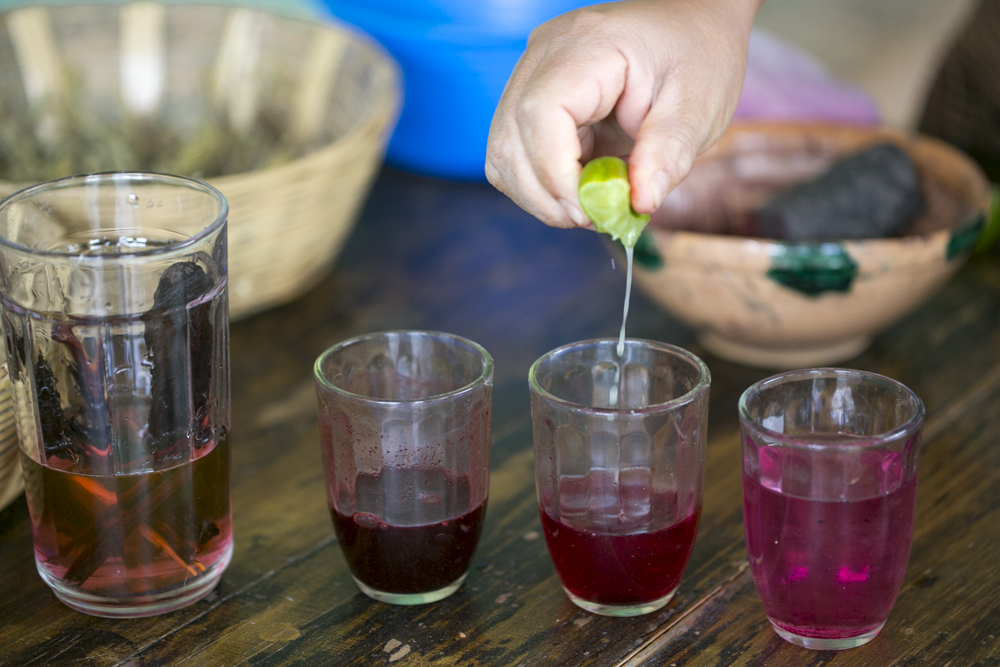 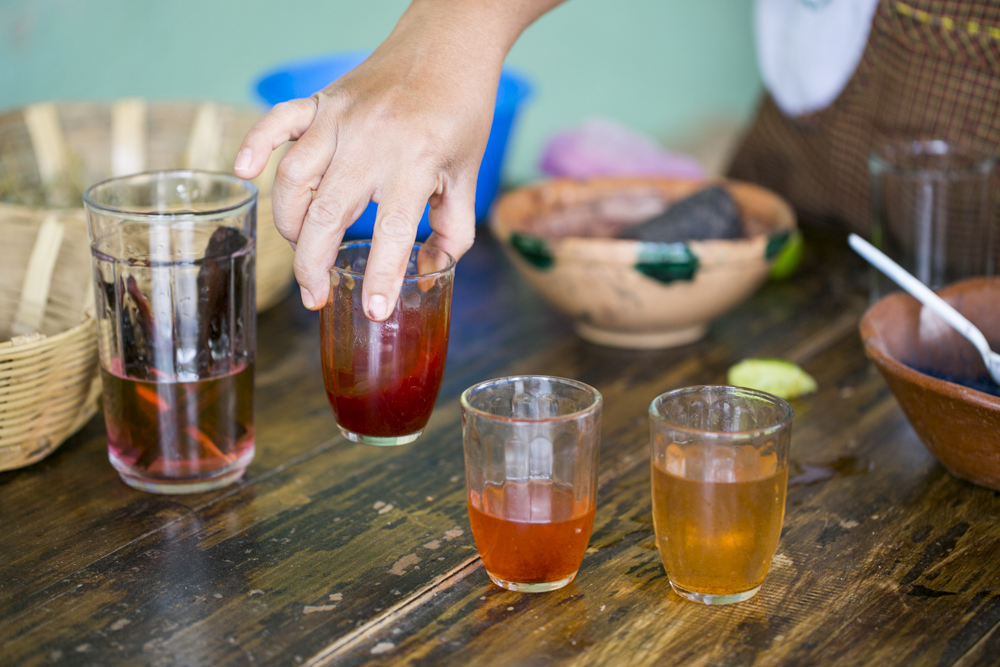 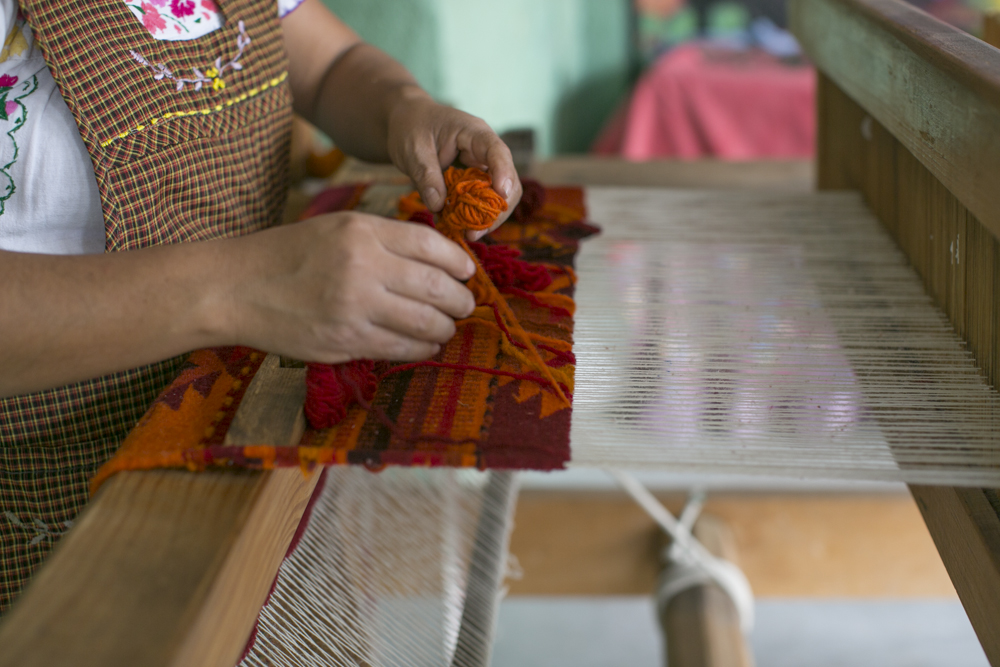 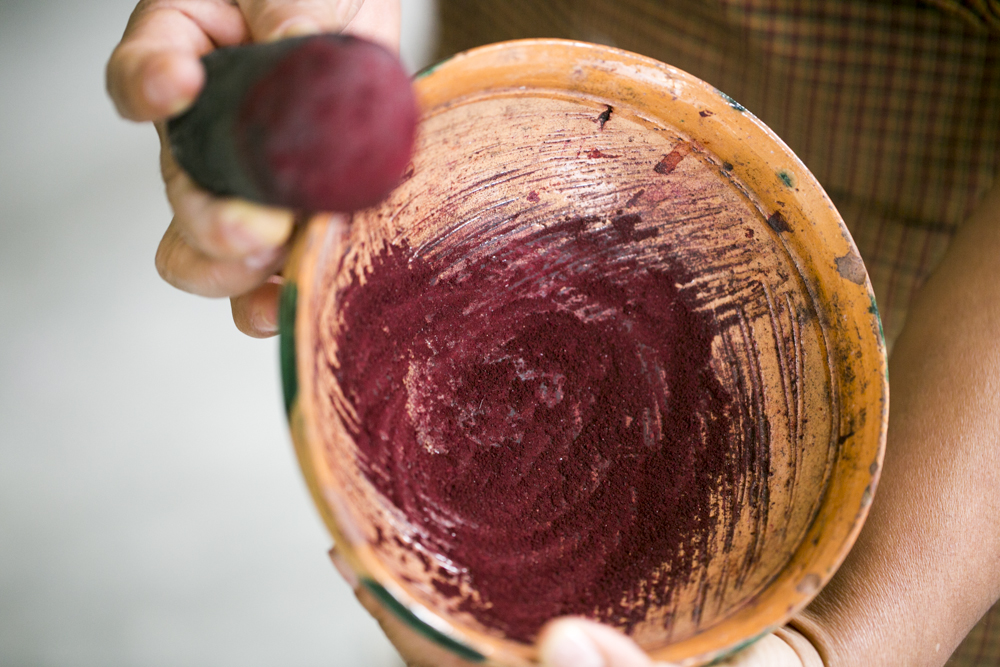 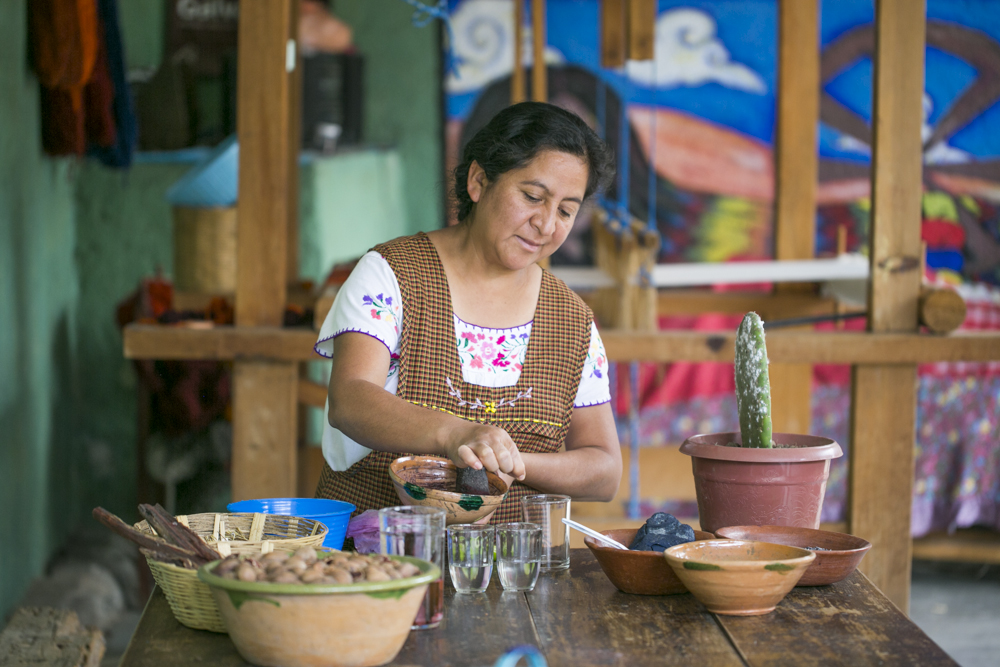 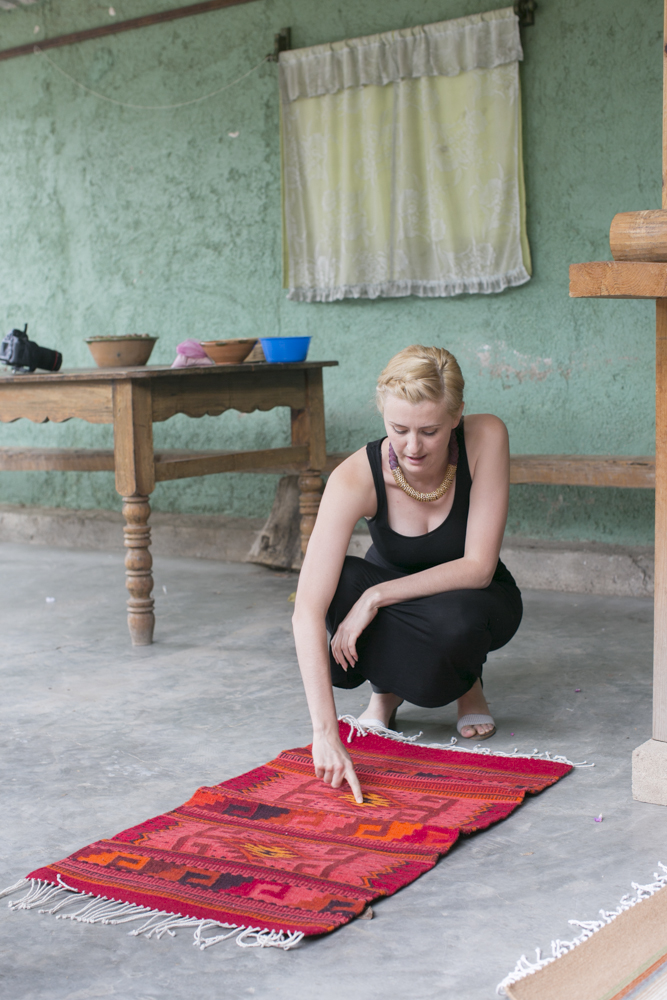 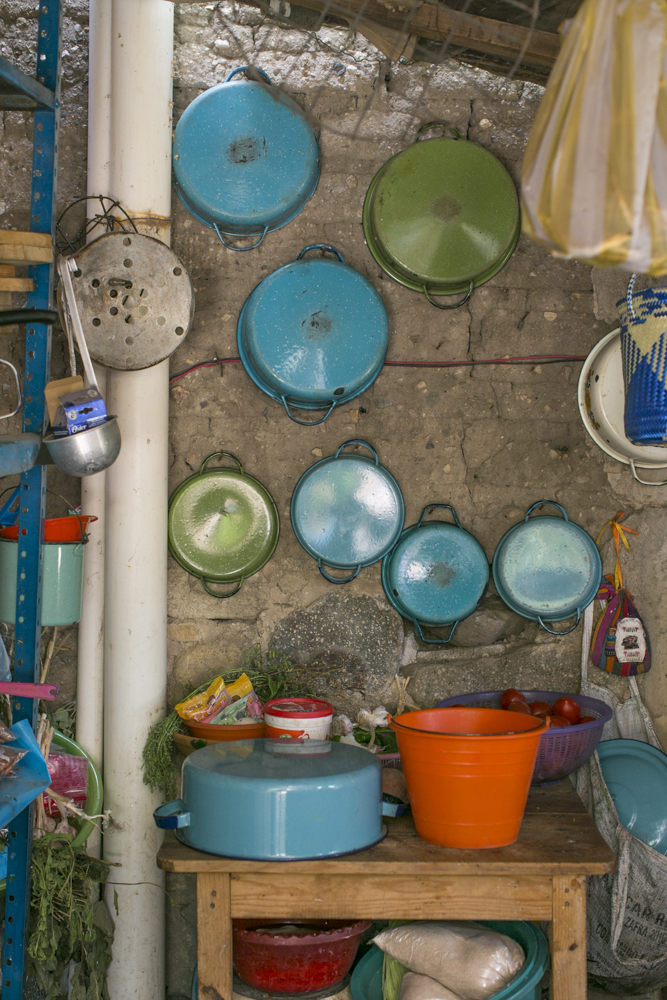 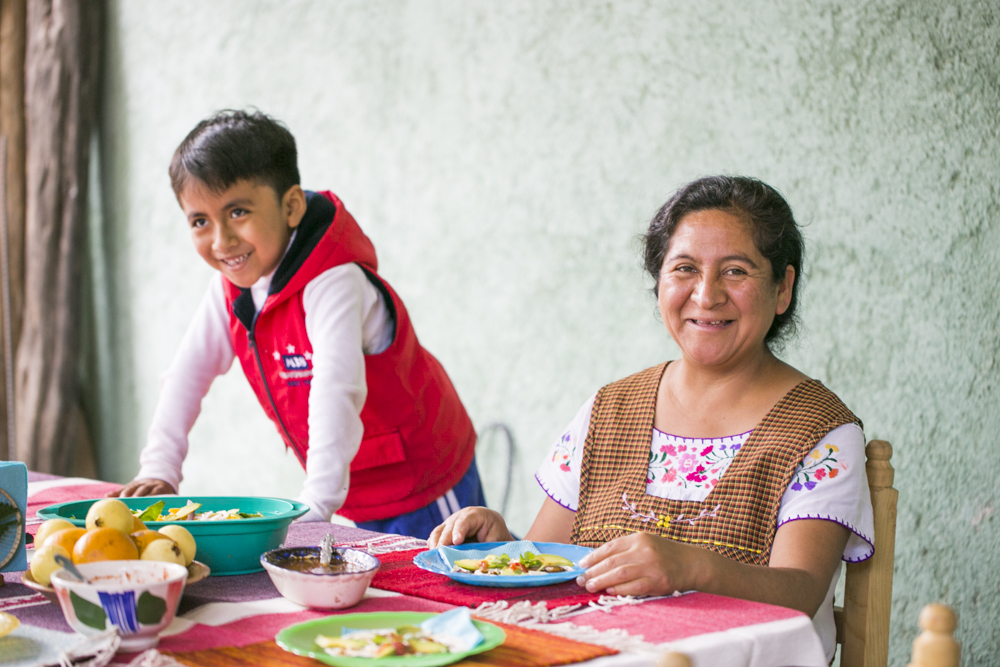 An all-purpose Mexican condiment that’s suitable for any summer meal, this salsa is a staple eaten with practically every Mexican meal. If you like, you can skip the pan and roast the tomatoes and chiles right in the simmering coals of your BBQ.

Leave tomatoes and chiles whole. Cook on a hot comal (a smooth, flat griddle pan) until mostly the skin of the tomato is blackened. If you don’t have a comal, a dry cast-iron frying pan will do.

Once cooled, remove stems and grind chiles in molcajete (or mortar and pestle), one at a time. Once ground, add tomatoes one by one, grinding and removing some of the skin so the salsa remains thick and smokey, but not too chunky. Add a squeeze of lime and a generous pinch of sea salt. Top with diced spring onions and serve with tortilla chips.

Leave tomatoes and chiles whole. Cook on a hot comal (a smooth, flat griddle pan) until mostly the skin of the tomato is blackened. If you don’t have a comal, a dry cast-iron frying pan will do.

Once cooled, remove stems and grind chiles in molcajete (or mortar and pestle), one at a time. Once ground, add tomatoes one by one, grinding and removing some of the skin so the salsa remains thick and smokey, but not too chunky. Add a squeeze of lime and a generous pinch of sea salt. Top with diced spring onions and serve with tortilla chips.

I met Andrea Hagan through friends in Mexico City, who insisted I book a tasting at Mezcaloteca, a bar and retail shop that offers the full mezcal experience in Oaxaca City. Andrea walks guests through the many varieties of wild agave, the process of its cultivation and its subsequent triple distillation in clay pots or glass (only the cheap stuff is distilled in metal). By the time you leave, no matter how tipsy you are (she pours generously), you’ll never confuse tequila and mezcal again. Andrea is a well of knowledge, and after a journey through the multi-layered flavors of Mexico’s traditional liquor, we had made a plan to spend a few days with Andrea as our guide. She would take us to visit a teeny tiny mezcal distillery (a thatched hut in the back of Don Felix’s house where he makes some of the best mezcal money can buy). Then we would head to a town called Teotitlan de Vaille, known for their remarkable natural dyes and woven rugs, to spend the day with her friend Pastora, the founder of Vida Nueva Women’s Cooperative, a Zapotec women’s weaving collective.

Pastora is an artist and an organizer. Founded 17 years ago, hers is the first women’s collective this very traditional area has ever seen. The iconic rugs made in Teotitlan were traditionally sold  exclusively in the central market out of stalls that continue to be handed down from generation (of men) to generation (of men). Skirting this nepotistic structure, the women of La Vida Nueva banded together to create unique designs and to sell them out of their homes. If they could not carve out a space within the market, then they would bring the market to themselves. Many of its members have fled abusive relationships, and have found themselves without familial support; Pastora enables them to develop a craft and earn a living for themselves. Now, almost two decades later, the women of La Vida Nueva are quite well-known for their unique interpretations of Zapotec motifs, and their labor intensive production of natural dyes (she showed us how to make an indigo dye from a cactus-loving bug that retails for $150/kilo).

Pastora and Andrea shared this very humble but essential salsa recipe with us. This is one that appears on every Oaxacan table, alongside mezcal of course.

Andrea Hagan in Her Own Words

Julia Sherman: You are originally from the Midwest. How did you end up in Oaxaca?

Andrea Hagan: I went to school in Vermont where all anyone does in the everlasting winter is ski and smoke pot. I´m a flatlander; to me skiing is like gliding down a trash mound covered in dirt and some snow. After my first Vermont winter I was like, ‘GET ME OUT OF HERE!’ My school had semester program going to Oaxaca, so two weeks later I was there.

JS: How did the reality of this place compare to your expectations? Did you ever imagine yourself living in Mexico?

AH: I was expecting Oaxaca to be a quaint rural village, but when I arrived I was pleasantly surprised to find a beautiful colonial downtown with a vibrant nightlife, political street art, hip galleries, and seemingly everyday there were traffic stopping calendas or parades with a big brass band, women in full skirts and long braids dancing with baskets of flowers perched delicately on the their heads, men in white guayaberas handing out mezcal, and people on the street joining the procession along the way. A few years later I came back to work for the university program. I was supposed to be here for six months, I´ve now been here for three and half years. Oaxaca has a way of pulling you in.

JS: Of course, everyone in Oaxaca drinks mezcal, but how did you become interested in all of the socio-political layers of its production? Why mezcal over other artisinal liquors?

AH: The first time I had mezcal it did not appeal to me in the least. There was a bar in town that had free, (yes, free) mezcal on Mondays, so you can imagine the quality. It wasn’t until I started going to Mezcaloteca and learned about the connection to heirloom corn production, which I was studying at the time. A lot of families in Oaxaca grow corn, beans, and squash and only produce mezcal a couple of times a year. We are losing both this type of traditional agriculture and mezcal production due to migration in these rural areas. After that I started finding out about the great variety of flavors of mezcal. In wine production we principally use one species of grape, vitis vinifera, which has many varieties: Chardonnay, Merlot, Shiraz, etc. In mezcal we use 14 different species, and many of those species have several varieties, then factor in that these plants are wild, and factor in production methods and terwar; the possibilities are endless. And, by the way, it doesn’t give you a hangover. What’s not to love?

JS: When you served us at Mezcaloteca, I felt like I was given a very academic introduction to a liquor that Americans seem to know so little about. How would you describe your job at Mezcaloteca? Are you a mezcal evangelist? Educator?

AH: I see myself as an educator, not a bartender. Mezcaloteca is an environment focused on educating the consumer about traditional mezcal: we have no food, no music, no beer, no cocktails, just water and mezcal. Yes, I´m serving alcohol but my goal is to take you on a historical journey, treating each guest as pupil, teaching them about the plant their drink is made of, how and where it was made, who made it. You can even go to visit the producer of the mezcal you are drinking.

JS: But the work you guys are doing doesn’t end in the tasting room. You have a non-profit arm of the company as well.

AH: In addition to educating consumers and working to preserve small scale traditional production, we are focusing more energy on the non-profit aspect of Mezcaloteca this year. For a while now we have been working on plans to start a nursery of wild agaves and hope to begin this year. We will also start exporting a limited quantity of mezcal to the US this year.

JS: You took me on a fascinating visit to see a small batch mezcal maker at work. The set-up was so humble and so involved. It really impressed upon me how special it is that you are finding a way to support the traditional small producers as opposed to industrializing the process. How often do you visit mezcal producers?

AH: Not as often as I´d like, probably every three months. Our ranch, Los Nahuales outside of Miahuatlan, Oaxaca is a great place to escape the city and enjoy the quiet of the countryside. When you go to the ranch you know you are going to eat and drink very well — tortillas made from the producer´s own heirloom corn, made fresh that morning on a comal over a wood-burning fire, black beans from their fields, fresh cheese from a neighbor´s cow, and of course mezcal made from that ranch. You can visit a couple of producers in one day and sample the best mezcal the region has to offer. It’s heaven for me.

JS:  And after we did our epic mezcal tour, you introduced me to Pastora and all the incredible work she is doing. How did you first meet her?

Andrea Hagan: We met while I worked for the study abroad program. I took a group of students to spend a week with the Vida Nueva Women´s Cooperative, of which Pastora is a founding member. The women in the cooperative are all Zapotec weavers, some of the older women don´t even speak Spanish. Women coming together, working to be self sufficient; this was seen as pretty radical in their community.

JS: What attracted you to their project above other groups of weavers in the area?

AH: In addition to selling their rugs together, they take their earnings and also do a project each year to give back to their community. For example, they started the recycling program in their village, Teotitlan del Valle. These women are inspiring to be around. They´re extremely strong, emotionally and physically. They spin wool, dye it with vegetable dyes, cook for their entire households, complete all of their familial responsibilities, and at the end of the day, they weave for about five hours. You just want to be around them. Pastora and her mother, Doña Sofia are also traditional healers.